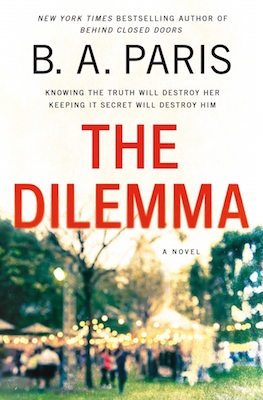 The following is an exclusive excerpt from The Dilemma, by B.A. Paris. Livia is counting down the hours until the birthday party of her dreams. Her husband, Adam, is in Windsor to pick up a surprise gift for her. But, just as he arrives, he learns a flight from Cairo has crashed, and he's overcome with the fear that his daughter, Marnie, flying home for her mom's party, might be on it...

The jeweler’s is part of the maze of pedestrianized streets, so I leave the bike in the usual car park and start the short walk there. It’s still warm, the sun stronger as it gets closer to noon, and the thought of Livia on her surprise trip to the spa feels good. As I weave between Saturday shoppers, I peel off my gloves and, tucking them into my jacket pocket, take out my phone to check the time.

The light is too bright to be able to read the screen, so I cup my hand around it. There’s a news notification on the home page.

My eyes freeze on the words Pyramid Airways. Marnie is flying Pyramid Airways. I stop, my heart constricting. I know it can’t be her flight; it has to be a different one. But the mention of Cairo Airport feels too close.

I press at the screen to open the main BBC News app.

My mouth goes dry. Is that the flight Marnie was meant to be on, the one she said she’d miss? Or a later one?

A child shouts out. Something—a bag—hits the side of my leg. I look up, my eyes unfocused, trying to take in what I’ve just read.

I need to find Marnie’s flight number, but for a moment I can’t make my hands work. I move into the shade by a shop window and bring up the WhatsApp conversation where she sent me her flight details. My fingers fumble on the screen as I scroll down.

The shock sends tremors through my body. It’s not only shock; it’s also relief. I unzip my jacket, the leather suddenly too heavy. Thank God Marnie missed the flight, thank God her flight was delayed. But I need to make sure, I need to check that she couldn’t have arrived in Cairo in time to get the Amsterdam flight.

I find the flight app I installed on my mobile when Marnie first left, then flip back to our WhatsApp conversation to get her flight number from Hong Kong. I put it into the app: HK945. The details come up—her plane landed in Cairo at 11:25 local time, so over an hour late—and only ten minutes before the Amsterdam flight left. I’m weak with relief. She couldn’t have made it, not with only ten minutes to spare. She’ll be at Cairo Airport, stuck between flights. She’ll be distraught, of course, but at least she’s safe.

I send it by WhatsApp too, to double my chances, then hold my breath, waiting for a sign that Marnie has seen it—the two blue ticks, the Typing . . . at the top of the screen. Nothing. There are no ticks to say it’s been delivered. I check the status—undelivered. The network must be down in Cairo because of the crash. It must be chaos at the airport. There probably won’t have been an an- nouncement about the crash, but everyone will know something is wrong because all the departures boards will suddenly show De- layed or Canceled for all subsequent flights out. Poor Marnie, she’ll be devastated by what’s happened.

I need to think what to do, how I can find out where Marnie is, and if she’s all right. There’s usually an emergency number that people can call to check whether or not a relative was on a flight. I know Marnie wasn’t, but it would be good to have confirmation that she missed it.

I go back to the BBC News story and see an update: All 243 passengers and crew members are thought to have perished. The reality of the crash hits again. Livia, I have to tell Livia; she needs to know. The thought of telling her is overwhelming. How can I tell her what’s happened without sending her into a panic? She’s with Kirin and Jess at the spa—I can’t just call her on the phone, not to tell her this.

A group of teenagers walk past, pushing one another and bumping my arm as I refresh the BBC News story. But there’s nothing further. I check WhatsApp, but still there are no ticks next to Marnie’s message.

I feel a creeping dread. I have no idea what to do.

From THE DILEMMA by B.A. Paris. Copyright © 2020 by the author and reprinted by permission of St. Martin’s Publishing Group.


B. A. ParisSt. Martin's PressThe Dilemma 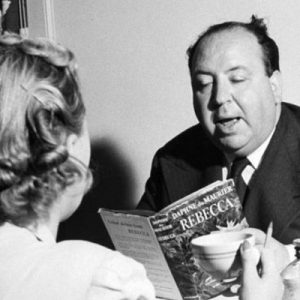 Discovering the Women Authors Behind Hitchcock's Movies It was our Saturday night ritual. Pop the popcorn, turn the lights down, and watch whatever Hitchcock movie my mother and I could...
© LitHub
Back to top