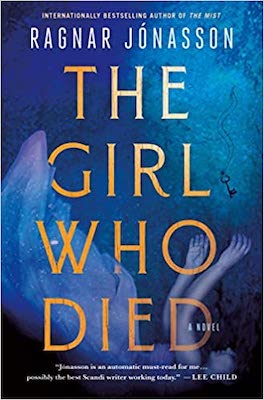 The following is an exclusive excerpt from The Girl Who Died, by Ragnar Jónasson. Winter, 1986. Una only wants to work as a teacher, but she can't find employment in Reykjavík. Desperate, she takes a teaching job in a remote fishing village, Skálar. The town has ten residents, and she only has two students. Spending most of the freezing winter alone in her attic apartment, she is plagued by dreams of a girl in a white dress. And then a tragedy, similar to one from long ago, happens again.

As she was approaching Skálar, fog rolled in without warning, blotting out the landscape and merging sea with sky. It felt like driving into an Impressionist painting, in which her destination kept receding as fast as she approached it; like entering a void in which time had ceased to have any meaning. Maybe, in a sense, this was true: maybe time was less important there; it mattered less what day it was, what hour it was, out here where people lived at one with nature.

When she ﬁnally reached it, the tiny hamlet of Skálar was wreathed in dense cloud. And now the feeling was more like being in a folk tale, an ominous, supernatural tale, set in a vague, shifting world. There was nothing solid, nothing real about her surroundings. Just as there had been nothing natural about her decision to turn her life upside down and promise to spend nearly a year out here, at the edge of the habitable world. But she must put a brave face on things: it wouldn’t do to pay too much attention to ﬁrst impressions.

She had passed a pinprick of light a little way back and remembered Sara saying the TV programme had mentioned a farm that counted as part of the village. And now she saw the dark shapes of houses looming through the billowing veils of grey vapour. If she hadn’t known better, she would have thought it was a ghost town. But there were people living here, she knew that. She began to have a powerful sensation of being watched; that here and there eyes were peering through the gaps between the curtains, curious about the identity of this newcomer.

It was only an illusion created by the fog, Una told herself; just as it was the fog that was to blame for her impression that the place was deserted; that no one had lived here for decades. Of course that happened sometimes: whole villages vanished – the ﬁsh disappeared and the population upped sticks and left. Yet here ten stubborn souls had clung on, and she was about to increase their number by one. Now she had seen it for herself, she had no intention of settling here. One winter, she told herself, then she would head back down south, the richer for the experience, having used the time to get her life back on track.

She parked her car at the edge of the village, next to a handful of other vehicles. So there was life here after all. The village itself could only be entered on foot. She had been given a clear description of Salka’s house, in which she was to have the use of the attic ﬂat: a handsome, white, two-storey building, she had been told, dating from the turn of the century. As luck would have it, the ﬁrst building to meet her eyes was a house ﬁtting this description, right next to the car park. It was set back a little from the sea. The dense cloud stirred in the breeze, shifting and parting to reveal a number of other houses clustered around the water’s edge. To her right, she noticed a particularly imposing building, dominating the settlement from its position on a rise in the ground, and, down by the sea, she glimpsed an attractive old wooden church. She hadn’t necessarily expected that, in a community this tiny.

Una got out of the car and went to stand in front of Salka’s house, which had large windows in keeping with the period in which it was built. Now there was no question that she was being watched. The curtains in one of the downstairs windows moved, and she waited, expecting to see Salka herself appear in the gap, so she was rather taken aback when the face that appeared behind the glass was that of a little girl, of perhaps seven or eight years old, with long, pale hair.

Although Una could hardly make her out in the gloom, she felt sure the child was watching her.

It was 10 p.m. Should children be up this late?

Smiling, Una waved at the girl, but even as she raised her hand, the small ﬁgure vanished from sight behind the curtain.

Salka hadn’t mentioned that she had a daughter.

Una walked slowly up to the front door, feeling a little chilled now. She couldn’t see any doorbell, just a heavy, functional-looking copper-lion knocker. As she lifted it and brought it down, the noise echoed around the silent village, and only then did she notice how quiet it was here compared to Reykjavík. Apart from the lapping and sighing of waves from the shore, you could have heard a pin drop – until she shattered the hush with her knocking.

Aidan Truhen and Nick Harkaway Discuss the Morality of Fiction, the Descent of the World, and the Addams Family 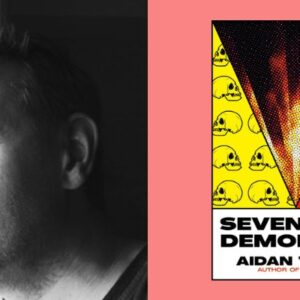 Aidan Truhen and Nick Harkaway Discuss the Morality of Fiction, the Descent of the World, and the Addams Family Aidan Truhen is the author of Seven Demons, the sequel to The Price You Pay. Here, he talks to Nick Harkaway (Gnomon, The Gone-Away...
© LitHub
Back to top