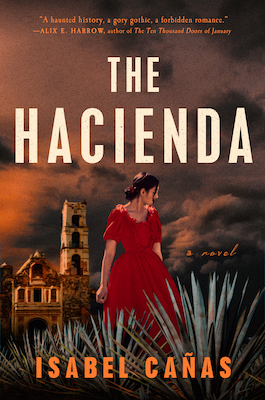 After the loss of her father and family home to political upheaval, Beatriz's future looks bleak--that is, until she meets Don Rodolfo Solórzano, a handsome young widower whose family emerged from the Mexican War of Independence with its fortunes intact. When Rodolfo proposes, Beatriz seizes him like a lifeline. She knows he keeps secrets, but she is also certain that his money, his name, and his family's estate, Hacienda San Isidro, will provide her with the stability she craves. In this excerpt, Beatriz arrives at Hacienda San Isidro for the first time, only to be caught by surprise by the first--but certainly not the last--of Rodolfo's secrets.

The carriage door creaked as Rodolfo opened it. I blinked, adjusting to the light that spilled across my skirts and face, and took the hand Rodolfo offered me as gracefully as I could. Hours of imprisonment in the carriage over rough country roads left me wanting to claw my way out of that stuffy box and suck in a lungful of fresh air, but I restrained myself. I knew my role as delicate, docile wife. Playing that role had already swept me away from the capital, far from the torment of my uncle’s house, into the valley of Apan.

It brought me here and left me standing before a high dark wooden door set deep in white stucco walls, squinting under the blinding sweep of azure September skies, the broad shoulders and steady hand of Don Rodolfo Eligio Solórzano at my side.

In the sunlight his loose curls gleamed bronze, and his eyes were almost as light as the sky beyond. “This is San Isidro,” he said. 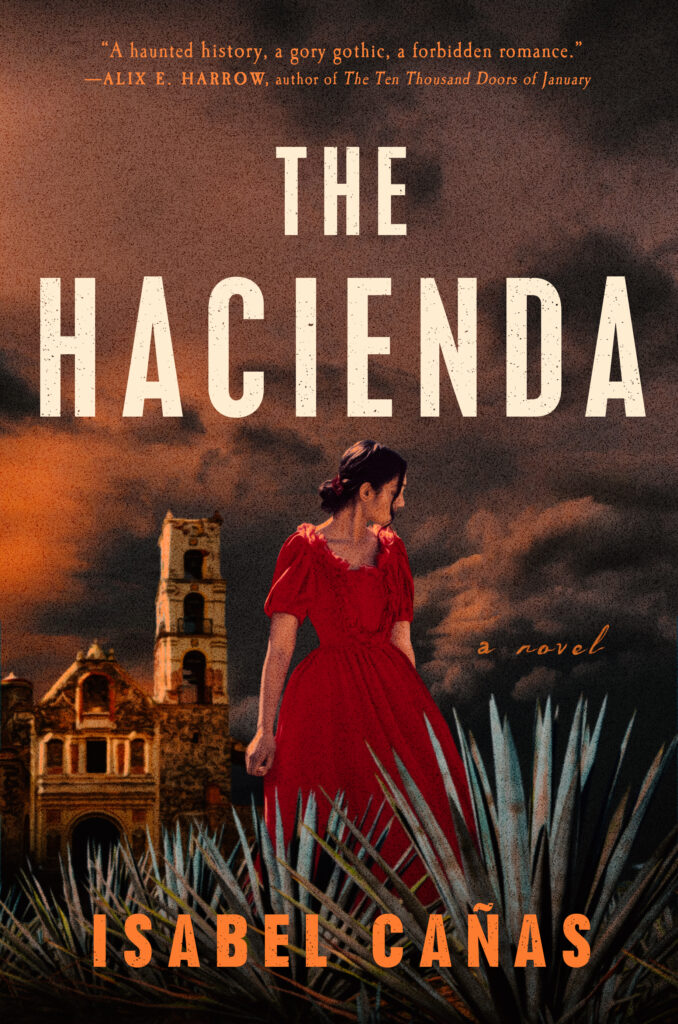 Hacienda San Isidro. I let my eyes drag over the heavy door, its wrought-iron accents, the high dark spikes on the front of the walls, the wilting bougainvillea that wound through them, blossoms and thorns alike drained of color and dying.

It was not quite what I expected, having been raised in the verdant, lush gardens of an hacienda in Cuernavaca, but it was my new conquest. My salvation.

When I first met Rodolfo, dancing at a ball to celebrate the founding of the Republic, he told me his family had owned an hacienda that produced pulque for nearly two hundred years.

Ah, I thought, watching the sharp panes of his clean-shaven face flirt with the shadows of the candlelit ballroom. So that was how your family kept its money throughout the war. Industry will rise and fall, men will scorch the earth and slaughter one another for emperors or republics, but they will always want drink.

We danced the next round, and the next. He watched me with an in- tensity I knew then was a priceless tool.

“Tell me about the hacienda,” I had said.

It was a big house, he replied, sprawling over the low hills north of Apan, overlooking sharp-pointed fields of maguey. Generations of his family had lived there before the war of independence from Spain, cultivating the agave and producing pulque, its sour beer, to be shipped to the capital’s thirsty markets. There were gardens filled with birds of paradise, the air thick with swallows, he said, and broad, bustling kitchens to feed all the tlachiqueros and the servants and family. They celebrated feast days in a capilla on the property, a chapel adorned with paintings of saints and an altar carved by the scion of the family in the seventeenth century and gilded by later, wealthier generations.

He did not answer, not directly. Instead, he described the way the sun set in the valley of Apan: first rich golden, deepening to amber, and then, with a swift, sure strike, night overtook the sun like the extinguishing of a candle. The darkness in the valley was so deep it was almost blue, and when thunderstorms slinked over steep hills into the valley, lightning spilled like mercury across the fields of maguey, silvering the plants’ sharp tips like the peaked helmets of conquistadors.

It will be mine, I thought then. A flash of intuition that swept me with the strong, trusting arm of a lover into the next steps of the dance.

And mine it became.

For the first time since March, a house was mine. So why didn’t I feel safe when the enormous door of Hacienda San Isidro groaned open and Rodolfo and I walked into the first courtyard of the estate?

A delicate tremor, the tremble of a monarch’s wings, fluttered at the back of my throat as I took in the hacienda.

Its buildings were muscular and ungainly, the awkwardly splayed limbs of a beast frozen halfway into adolescence. The rainy season was ending; the garden should have been shades of emerald at this point in September, but what scarce vegetation grew in the outer courtyard was as brown as the earth. Wild magueys scattered weed-like and drooping on either side of a grayed capilla—it must have once been white—and dotted the lawn that led up to the house. Rotting birds of paradise crowded in scattered beds, their heads sub-missively bowed before us as our boots crunched up the gravel path. The air felt heavier inside San Isidro’s walls, thicker, as if I had stepped into a strange, soundless dream where the stucco swallowed even the songs of the birds. Outside of the chapel, we passed into an inner courtyard. Here, Rodolfo gestured to two rows of servants who stood at attention in front of their quarters and kitchen, waiting to greet us. Before they dipped their heads, a dozen pairs of black shining eyes swept over me, cool and assessing.

After explaining that the tlachiqueros were in the fields until dusk, Rodolfo made introductions: José Mendoza, once the right-hand man to the dismissed foreman Esteban Villalobos, had acted as record keeper for over a decade. He was the chief authority when Rodolfo was in the capital. Mendoza removed his weather-stained hat and placed it on his chest; his hands were gnarled with age and work. He looked old enough to be my grandfather.

Ana Luisa, the head of household, was a woman of about fifty, her steel-gray hair parted severely in the center, her plaits wound tightly around her head in a solemn crown. Her daughter, Paloma—Ana Luisa’s double with raven black hair and rounder cheeks—stood at her side. Other names rolled over me like water; I heard them but remembered none, for a figure caught my eye at an arched doorway at the far entrance to the servants’ courtyard.

A woman strode toward us, tall as a soldier and possessing all the same swagger. She wore a faded blue skirt that was short enough to reveal leather riding boots, stained with sweat; a wide-brimmed hat hung down her back by a cord around her neck, but if her complexion was any indication, she rarely wore it. Her skin was bronze and her hair streaked gold from long hours in the sun.

Stay out of the sun or you’ll never get a husband, Tía Fernanda once whispered snidely, pinching the skin on the back of my hand. Though she had never met my father, and my mother refused to reveal any information about how mixed his heritage was, it didn’t matter to Tía Fernanda: my hair and face gave her enough ammunition to find me undesirable. To refuse to let me stand next to her cream-pale daughters at the ball where I had met Rodolfo.

In the end, Fernanda’s behavior meant that I had a golden husband, and her daughters did not. Fate had been unkind to me, but sometimes, its pettiness worked in my favor.

The woman stopped directly in front of me. Her pale eyes were the mirror of Rodolfo’s, and her hair was the same color, sun-gilded and wind-swept. She gave me a swift, frank look from polished black shoes—quickly gathering dust—to my gloves and hat.

“You’re early,” she announced. “Is this my new sister?”

My lips parted in surprise. Who? Rodolfo had only ever mentioned a sister once in passing. She was called Juana; he said she was a few years younger than his own twenty-eight years, an age that led me to assume she was married. Never once had he mentioned her in the same breath as San Isidro.

“You look displeased,” Juana said after Rodolfo introduced me, a hint of amusement in her voice. It was not warm. “Did Rodolfo not warn you about me?” Her lips were dry, and thinner than was considered attractive. They disappeared entirely when she smiled; her teeth were almost too bright, even and ivory as a set of piano keys. “Don’t worry, I keep to myself. I won’t even be underfoot—I live over there.” She jutted her sharp chin over the line of servants, to a set of low buildings between the house and the capilla.

Not in the family’s house? “Why?” I blurted out.

Juana’s face shifted, resettled. “The house is terribly drafty this time of year,” she said lightly. “Isn’t it, Rodolfo?”

Rodolfo’s face looked a bit strained as he agreed and returned her smile. He was embarrassed by her, I realized with a start. Why? She was unusual, to be sure, but there was a frankness to her that reminded me of Papá’s no-nonsense manner. A simple, easy kind of authority, one that drew the attention of all the servants to her.

I could almost feel the air shift around me, toward her and her undeniable gravity. Rodolfo was not the master of this house.

A breathless fear uncurled in my chest; in response, I adjusted my posture, drawing my shoulders back as my father used to. There was nothing to be afraid of. This hacienda was mine. I married its patrón, and Juana chose to live among the servants. I ought to be glad Juana was so embarrassing to Rodolfo that he barely spoke of her. She was no threat to me. Let her stay in this middle courtyard, in the servants’ quarters. The main house would be mine to rule. My domain.

Those thoughts quieted the unsettled lurch of my gut as we chatted with Juana for another moment longer, and then left the servants to their work and walked through the arched doorway into the innermost court- yard.

Rodolfo had asked me twice if I wanted to stay in the capital, in his family’s old Baroque apartment, but I refused. I wanted the house. I wanted to steal Mamá away from Tía Fernanda, bring her here and show it to her. I wanted to prove to Mamá that marrying Rodolfo was right. That my choice would open a door into a new life for us.

And now, as I at last faced the house, the slant of its gap-toothed roof, its dark windows and age-weathered white stucco walls, a feral feeling seized me.

From THE HACIENDA, published by Berkley, an imprint of The Penguin Group, a division of Penguin Random House, LLC. Copyright © 2022 by Isabel Cañas. 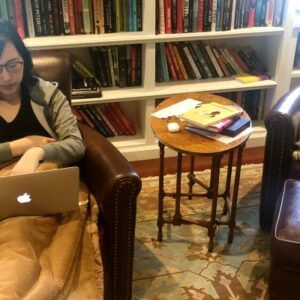 Shop Talk: Steph Cha Writes Yelp Reviews, Works Jigsaw Puzzles, and Always Has a Blanket Steph Cha is the author of the Juniper Song crime trilogy, and most recently, Your House Will Pay, winner of the Los Angeles...
© LitHub
Back to top