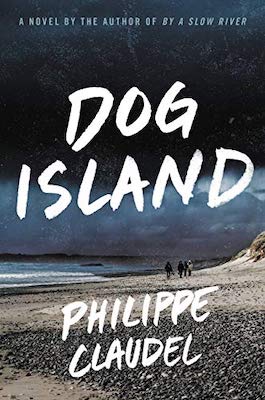 The following is an exclusive excerpt from Dog Island, by Philippe Claudel and translated by Euan Cameron. In a remote island of the Mediterranean, where the inhabitants have lived undisturbed for generations, three unknown bodies wash up on shore. And the residents wonder, if they begin to investigate what happened, will they be endangering their quiet and safe lives?

It was a Monday morning in September, on the beach, when it all began. It is called the beach, for want of a better term, even though nobody can swim there on account of the reefs and the tide, nor relax on it because it is made up of rough, sharp volcanic shingle.

The Old Woman walked there every day. The Old Woman was the former teacher. Everyone on the island had passed through her class. She knows all the families. She was born here and she will die here. No one has ever seen her smile. They scarcely know her age. Probably not very far off eighty. Five years previously, she had been obliged to give up the class. From then on she took her daily walk early in the morning, with her dog, a mongrel with melancholy eyes, who liked nothing so much as chasing after the seagulls.

She was always alone on the beach. Whatever the weather, nothing in the world would make her give up this walk by the sea, in this desolate place which you would think had been snatched from a northern country, from Scandinavia or Iceland, and tossed down there just to irritate people.

That morning, the dog was prancing around her as it usually did, leaping up at the taunting large birds. It had begun to rain. Still only a light, cold drizzle, and the sea was rolling in with mean waves, short and strained, that broke upon the shore in a dirty foam.

The dog stopped all of a sudden, barked, and set off on a mad run that took it fifty meters or so away, toward three long shapes that the swell of the tide had thrown up on the beach, but which it was still tossing around, as though reluctant to relinquish them completely. The dog caught their scent, turned toward the Old Woman and let out a long howl.

At that moment, two men also noticed the shapes on the beach: America, a bachelor who produced a little wine and was something of an odd-job man, who from time to time came to inspect what the tide had thrown up—cans that had fallen over-board, lost wooden planks, nets, ropes, bits of floating wood. He saw the strange shapes in the distance, got down from his cart, patted the flank of his donkey, and told it not to move, to stay there, on the path. There was also Swordy, so called because, although he was not very bright, he was without question one of the best catchers of swordfish on the island, knowing the habits of the great fish—the depths at which it lay, its moods and cycles—and able to fathom its routes and tricks.

The boats had not gone out that day. The weather was too bad. Swordy worked for the Mayor, who was the biggest fishing employer on the island. He owned three motorboats and cold storage rooms in which to keep his fish, along with those of ten other skippers who were too poor to possess their own.

Two days earlier, while everyone was away at sea, a gust of wind had blown away three buoys with some lobster pots that Swordy had set down in the open sea, having borrowed the boat for a full day and a night, with the agreement of the Mayor.

That Monday morning, he had come to the beach to see whether the tide might have brought them in. It was the dog’s long howl that alerted him. He was walking at some distance from the Old Woman, who had not heard him. He saw her accelerate suddenly and stumble on the shingle, almost fall, and recover herself. He sensed that something was wrong.

He spotted America, who had just left his cart and was also walking toward the dog.

All three—the Old Woman, Swordy, and America—arrived at the same time at the spot where the drenched shapes were bobbing about in the waves. The dog looked at its mistress, let out another little bark, then sniffed at what the sea had just produced: the bodies of three black men, simply dressed in T-shirts and jeans, barefooted, apparently sleeping, their faces against the shore.

The Old Woman spoke first, “What are you waiting for? Pull them out!”

The two men looked at one another and then did as the Old Woman said. They were not sure how to pick up the corpses and hesitated. They eventually took them by the arms and dragged them out backward, laying them side by side on the dark shingle.

“You can’t leave them like that! Turn them over.”

Again, they hesitated, but eventually they managed to tip the bodies on their sides and suddenly the faces of the dead men appeared.

They were less than twenty years of age. Their eyes were closed. They seemed to have dropped into a harsh sleep that had twisted their lips and marbled their skin with great patches of violet, lending their faces an impenetrable expression that resembled a reproach.

The Old Woman, America, and Swordy all made the sign of the cross at the same time. The dog barked, three times. The voice of the Old Woman was heard once more:

“America, do you have a tarpaulin in your cart?” America nodded. He walked away.

“You, Swordy, go and warn the Mayor. Don’t talk to anyone else. Come back with him. Don’t delay.”

Swordy did not argue and he set off at a run. Death had always frightened him. You could hear the sea after the gust of wind that had swept over the island during the night, and you could even smell it inside the houses because it had cast its salty spittle beneath the doors, between the disjointed stones and down the chimneys. He had slept badly, too, tossing and turning in bed, getting up to pee or drink a glass of water.

The Old Woman and the dog stayed near the corpses. They looked like a painting in a museum—instructive, but it made you wonder what moral it could be illustrating: the infinity of the sea, the bodies of three young black men, an old woman and a dog standing beside them. You sensed that it must mean some- thing, but could not have said what it was.

America returned with a blue plastic tarpaulin. “Cover them,” the Old Woman said.

The bodies disappeared beneath the synthetic shroud. America placed some large pebbles along the edges to stop the wind blowing it away, but it still managed to sweep through underneath. This made a tearing, ruffling sound, like the big top of a circus.

“Where do you think they come from, Miss?”

In spite of his forty years, his large manly fingers, and his face that was as chapped as an old bar of soap, America found his anxiety and his childish voice returning. He lit a cigarette.

“Where do you think?” said the Old Woman abruptly.

America shrugged and took a puff, waiting for a truth he dared not utter to be mentioned. But when the Old Woman said nothing, he murmured, hesitating like a pupil unsure of his response, and jutting his chin in the direction of the pale distance to the south.

“Of course from over there! They didn’t fall from the sky! You were never very smart but you watch television like everyone else, don’t you?” 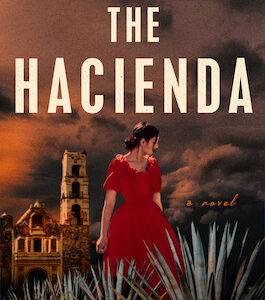