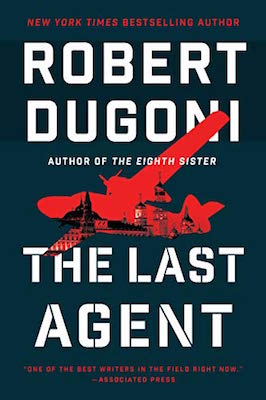 The following is an exclusive excerpt from The Last Agent, by Robert Dugoni. After a botched undercover investigation that causes his own government to betray him and try him for treason, former spy Charles Jenkins is through with espionage. That is, until he learns about a woman stuck in a terrible Moscow prison.

Freedom did not come the day a jury exonerated Charles Jenkins of espionage and federal judge Joseph B. Harden declared him “free to go.” It did not come when the deadline for the government to appeal the jurors’ decision passed. Though Jenkins was not physically incarcerated for the remainder of his life, and grateful for the jury’s decision, his true freedom did not come until today, six months after the jury’s verdict and Harden’s proclamation. He returned home from his morning run, entered his office, and wrote the last check to the last security contractor hired by his former company, CJ Security.

His business had provided security to the discredited international investment firm LSR&C. That LSR&C had been a CIA proprietary and not a legitimate investment company, and that it had retained CJ Security under these false pretenses, did not matter. Jenkins had been lied to, defamed, shot at, and nearly imprisoned for life because of LSR&C’s deception, but CJ Security’s contractors and vendors had no part in any of that either. They had performed their services pursuant to a written contract, and they were entitled to be paid.

His attorney had recommended bankruptcy to get out from under the contractual obligations. Jenkins had rejected that advice. He would not right a wrong with another wrong. Negotiate a payment schedule. I’ll make it work, he’d said.

And he had done so—not by accepting the six-figure book deal   a publisher offered him to write of his escape from Russia and of his subsequent trial and acquittal of the espionage charge. He’d also refused to sell any of the acreage of his Camano Island farm.

He’d paid off his debts the old-fashioned way. He’d worked his ass off.

He performed investigative services, served subpoenas, and did background checks on employment candidates for any business that would hire him. He made organic honey, lip balm, and hand cream from his beehives and sold those products at a store in Stanwood and online. He divided his pasture and boarded horses, and he cut and sold cords of firewood. He’d done what he needed to do to pay his debts and support his wife and two children.

Jenkins licked the back of an envelope and sealed the final payment to the final contractor. He stared at the address label, feeling a sense of accomplishment . . . but also betrayal—a bitter pill that left a taste more unpleasant than the envelope glue.

Let it go, he told himself.

He considered Max, his mottled pit bull asleep at his feet. “You ready to go outside, girl?”

Max instantly rose, her tail whipsawing the air. Jenkins had taken his early morning run without his trusted companion. Max was certainly willing—but she was also long in the tooth. Her joints would thank him for leaving her at home three of the five days he ran. In between, she gobbled glucosamine to ease her joint pain.

Fifteen minutes later, Jenkins had changed into his work coveralls and drunk a morning protein shake. He’d increased his workout regimen and started a plant-based diet that had cut another five pounds. He now carried 225 pounds on his six-foot-five frame—his weight on his military service records.

When he opened the back door, Max bolted outside, hurtling down the porch steps and across the lawn to bark at the boarded horses.

The two Appaloosas and the Arabian lifted their heads from their feed bags, twigs of hay protruding from their mouths, but they otherwise ignored the disruption of their meal. The paddocks had held up well since Jenkins had installed a hot wire across the top rail to dissuade the horses from using the posts to scratch their backsides.

He zipped his stained and well-worn Carhartt jacket against the winter chill and pulled his fur-lined work gloves and black skullcap from the pockets, slapping them against his coveralls to kill or displace spiders. Then he sat on the bench he’d made from a felled pine tree and slipped on his mud-caked boots. Max returned.

“Did you let those horses know you’re still the boss?” Jenkins rubbed her face and scratched her head before he stepped down from the porch. The frozen grass crunched beneath his boots, and his breath marked the chilled air as he crossed the pasture to put his vegetable garden to bed. Alex, his wife, had spent a few hours earlier that month pulling weeds, which would ease his job this morning.

He retrieved what supplies he needed from his metal shed and rolled out black felt paper, staking the corners, then covered the felt with cardboard, which smothered the weeds but also released a sugar that would attract earthworms as it deteriorated.

As Jenkins turned on the water spigot to soak the cardboard, Max barked, though not at the horses. Jenkins didn’t have neighbors, at least not nearby, and his friends rarely stopped by unannounced. Alex had taken Lizzie to day care and would work the morning teaching math in their son, CJ’s, classroom.

Jenkins raised a hand to deflect the glare of sunlight streaming through the trees, and he watched a young man turn the corner of the house and start across the yard toward him. In a dark suit and a long black coat, with short blond hair, he looked like a Mormon missionary. His gait indicated he was eager and determined to change the world for the better.

“Easy, girl. Sit,” Jenkins whispered when Max growled. “Let’s be neighborly. Unless given reason not to be.” Mormon missionaries traveled in pairs, and usually in neighborhoods where they could more widely spread their message. And while the Mormons were determined, this young man looked too cocksure, too composed to have come on religious business. He also looked too old for a mission. Jenkins hoped the man wasn’t carrying a subpoena—or something more deadly. At present, all he had in hand was the gardening hose.

Max dutifully sat at Jenkins’s side. The young man stopped when he stepped onto the soggy lawn and looked down at his polished black dress shoes. His determined expression became hesitant.

He looked up. “Are you Charles Jenkins?”

“What’s this about?” Jenkins eyed the ground for a weapon.

“I’m hoping to speak with Charles Jenkins.” The young man’s voice rose in question. “Is he home?”

“I asked what this was about.”

Max emitted a low growl, drawing the man’s attention. “Russia,” he said, redirecting his gaze to Jenkins. “It’s about Russia.”

Excerpted from The Last Agent by Robert Dugoni with permission from the publisher, Thomas and Mercer.  Copyright © 2020 by La Mesa Fiction, LLC. All rights reserved.

In Which My Memory Is Rendered Real 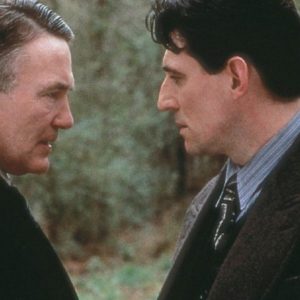 Miller's Crossing, 30 Years Later: Revisiting the Coen Bros' Gay Irish Gangster Epic There’s a lot that marks “Miller’s Crossing,” which turns 30 this week, as a film by Joel and Ethan Coen. Frequent...
© LitHub
Back to top