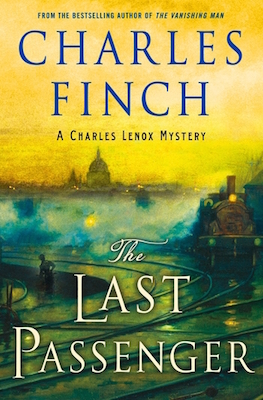 The following is an exclusive excerpt from The Last Passenger, by Charles Finch. In this final installment in the prequel trilogy about the origins of Victorian amateur detective Charles Lennox, our young detective is faced with an impossible case: a young man is found dead in a train car with no identification whatsoever.

The storm only gathered strength during the short trip to Paddington. Lenox felt keenly for poor William Elliott, the raw-faced young groom, just seventeen, who sat atop the box of the carriage with the reins and whip in hand.

Inside the carriage it was tolerably dry, though water beaded at the joints of the door. Lenox’s view through the small windows was impenetrably dark. As they drove northwest on Edgware Road, he could just make out the ghostly pale silhouette of Marble Arch at one point. But that was all.

The benefit of the weather was that they were virtually alone on the road; in only fifteen minutes or so they had made the journey.

“This will do,” Lenox called out when they were near the front of the station.

“Please—but look, I’ll point out where.”

Paddington Station was new. It had opened just the year before, the design of a gentleman, Isambard Kingdom Brunel, who was reshaping the nation building by building, one of the most celebrated men in Victoria’s realm.

He had constructed Paddington as a long, slim rectangle—rather like Lenox’s study, come to think of it. You entered on one of the short sides, here on Praed Street, and were immediately a few feet from the station’s two tracks. (Many a tardy traveler had blessed Brunel’s name for this touch.) At the far end, which lay open to the city, the trains departed.

Then there were the two long sides of the rectangle. On the left was a series of rooms and offices. On the right, partially open to the air, was an ingenious carriage route that allowed taxis and wagons to pull up directly to the trains.

This lane was where Lenox directed Elliott. It would offer him and the horses at least a bit of warmth and dryness, he hoped.

Lenox alighted from the carriage and into the shelter of the awning in front of the Great Western Hotel, a new establishment, catering mostly to travelers, with a splendid and blindingly bright façade, as dramatic as a Scottish castle on this stormy night. A bell-man glanced at him inquiringly, but Lenox declined his assistance with a wave that he hoped implied his thanks.

He studied the train station from the short distance across the street. It was desolate, no light stirring behind its doors. Lenox had checked his Bradshaw’s, the book of timetables every Londoner kept a copy of. The last train that evening had been expected at 10:14, and now it was past 11:00, which must mean the last travelers had long departed, most of them drying themselves by cozy fires, coats dripping in front halls humble and grand across the city.

He pulled out his pocket watch: 11:12, to be exact. He placed the watch—his late father’s, a battered and dented gold object—back in his waistcoat pocket and strode across the street.

Murder. He might act as if he had grown too grand for Hemstock’s patronage, but he had still only ever been involved with two murders of any note—that is, which had taken longer than ten minutes to solve. Though it was doubtful this would be the third, his pulse nevertheless quickened as he entered the station.

His eyes took a moment to adapt. He made out the great curved roof that swept overhead, making the hall at once grand and inti- mate. All around were shuttered stalls, which during the day did a roaring trade in newspapers, tobacco, and various foodstuffs to be eaten on the hoof.

Soon he grew accustomed to the dark. Receding up the left interior side of the building was a long row of signs projecting out from the wall every ten feet or so.

For discretion’s sake, perhaps—certainly not for convenience’s— the last was women’s lavatory. It was near this distant spot, which Lenox took to be the scene of the crime, that he saw a small group of people, the only ones visible in the station, glowing by the light of at least two lanterns. They stood next to the only train left in the station. Lenox set out to see who they were.

Despite his footsteps, which he thought would have alerted them, they started when he said, approaching, “Good evening, gentlemen.”

A craggy old man in a huge sealskin cloak took a step forward. “Who’re you?”

There were three men. One was a police constable with a cherubic look, but Hemstock wasn’t among them. This was no surprise; the inspector was likely at a bar, taking his leisure. He was on duty until six the next morning and rarely rushed himself.

Lenox bowed his head slightly. “Charles Lenox, gentlemen. I am an associate of Inspector Hemstock’s.”

“Hemstock? Is he from the Yard?”

Lenox always avoided saying that he himself was from the Yard— when he could. “We sent the constable for him over ninety minutes ago,” the older man said.

“I have just seen Mr. Hemstock. He will be here shortly. In the meanwhile, may I ask the pleasure of knowing your name?”

“I’m Joseph Beauregard Stanley,” the old man in the sealskin coat said. “Late of Her Majesty’s Navy. Presently the stationmaster on duty.”

“There’s been a death, Mr. Hemstock says? Possibly a murder?”

“There’s been a death, Mr. Hemstock says? Possibly a murder?”

One of the other two men snorted. Not the constable. “If it was anything else, I’d like to know what.”

“A violent death, then.”

“Violent, yes,” the man replied, as if the word could scarcely describe what he had seen. He wore a black frock coat and no hat. Anticipating Lenox’s next question, he went on, nodding at the train, “I’m the conductor of the 449.”

“So you found the body?” asked Lenox.

Lenox was curious about that statement, but said, following the conversation’s momentum, “Perhaps we had better have a look.” When there was a pause, he turned to the constable, a very young man, he saw now, who held the other lantern. “Good evening. Charles Lenox.”

“Rossum, sir,” said the lad in an accent conspicuously of the East End. Lenox would have laid a shilling coin that the boy had been born within hearing of Bow Bells: the traditional definition of a cockney.

“You were on your beat?”

“No, sir. I was round the Nimble Peacock on Chapel Street, sir, just by. Day finished. Enjoying a pint of beer. I only came at the whistle, sir.”

He looked a bit proud as he said this—not without reason. It had technically been his duty to answer the call of his fellow officer, but few of London’s constables would have taken the trouble on a dark and rainy night. The whistle usually blew to ask for nothing more than assistance with a drunken brawl.

“Well done, Mr. Rossum,” said Lenox. “I shall inform Sir Richard in the morning of how responsible you were in performance of your duties.”

Rossum’s eyes widened in his lantern’s light. Sir Richard Mayne was the head of Scotland Yard. “I thank you friendly o’ that, sir.”

Lenox nodded. Then he said again, trying to sound unrushed, “Shall we go and look at the body?”

“Hadn’t we better wait for the inspector?” replied the old station-master.

“The sooner the body is gone, the sooner your station is yours again, Mr. Stanley,” Lenox said. “I’m happy to wait if you wish, however.”

Stanley sighed. “No, I suppose you’d better go aboard.” He didn’t like the idea though. “I’ll let these chaps take you. It’s not a sight I care to see a third time. And someone must be here when the inspector comes. If he ever does.”

They boarded the train single file, led by the conductor.

The 449 from Manchester had four passenger cars, it appeared. The conductor, whose name Lenox still hadn’t caught, took them to the first of them, the third-class carriage. This would have been the cheapest seat to reserve, its hard benches usually populated exclusively by men of the working classes. They traveled closest to the clamor and powerful, if not unpleasant, coal smell of the engine room.

Both the conductor and Constable Rossum had lanterns, and it was by their light that Lenox saw the victim.

He was slumped on the last bench at the rear of the car. He looked young, his light brown hair combed back. His head leaned against the window next to him, as if he were asleep. He had, Lenox thought, a handsome face, clean and strong.

The other two made way for Lenox to go first. The fire from the lanterns danced in the glass windows. Moving forward he tried not to betray his nervousness—concealing it behind an intent gaze that took in the details of the carriage. But this was pointless. There was nothing to see, all the luggage gone, every seat emptied, the carriage cleaned even of the usual refuse.

At last he drew close to the body. He saw that the man was young, perhaps the same age as Lenox himself. He was extremely pale in the light of the lanterns.

Then Lenox looked down and saw why. It was no wonder the stationmaster hadn’t wished to come aboard again. The victim had lost a tremendous amount of blood, and even now remained in a desperate pose, as if trying and failing to hold in his entrails. His stomach had been slashed open.

A butchery of a murder. There was a sour, metallic smell in the air. Lenox turned back to the conductor and the constable, trying his best to be professional. “I take it nobody saw anything.”

“Only me,” said the conductor. “I had collected all the tickets from the seats before London, but I was missing my own return bus ticket, to get home. I came through to see if I had dropped it. ’Twas then I found him.”

“Did you clean the carriage? It appears spotless.”

“No—that would have been one of the station’s men. Probably tidied up my bus ticket along with everything else. But there is occasionally a drunken man asleep aboard the train. Whoever cleaned the car would have assumed that had happened here. Ignored him.”

The conductor shrugged. “It was dark and it’s the third-class carriage. A quick tidy.”

Lenox thought for a moment. There was a great deal to take in, and, beginning with an inspection of the body, he noted it all with a pencil in the small leather-bound notebook he kept in his front pocket, each small detail.

Still, when he stepped down onto the platform again, some fifteen minutes later, it was not the inhumane manner of the murder that filled him with consternation. It was that for the first time in his young career, he had encountered a case without a single clue.

Juries and Judgement in Hollywood Cinema 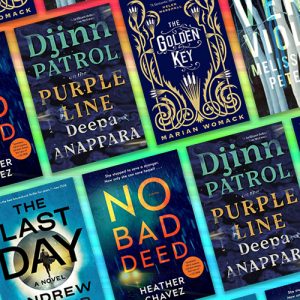 7 Debut Novels You Should Read in February Breaking into the crime game isn’t easy, but every month, a few brave and talented souls make a go of it. For readers,...
© LitHub
Back to top