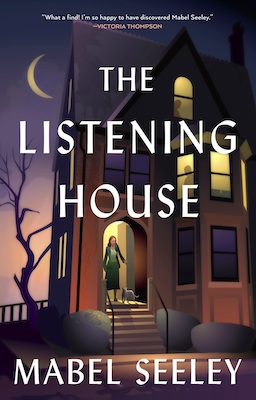 The following is an exclusive excerpt from The Listening House, by Mabel Seeley. Originally published in 1943, this classic story follows Gwynne Dacres, newly out of a job, who takes up residence at 593 Trent Street, a sinister boarding house operated by the stiff Mrs. Gruff. After a few sleepless nights, a mutilated corpse is discovered in the basement, and Gwynne stumbles on a mystery she could never have imagined.

She limped a little as she went down the hall. It seemed heartless not even to look at her rooms. She was a big woman; heavy bones showed through her sagging flesh, but from the back she looked very old, her head hunched forward so that her black crepe shoulders rose above her neck. She limped straight down the hall, stopping at the blackened double doors at the end, lifted a key from the casing, threw the doors open, and stood there in the opening, nodding, smiling, beckoning, in some odd way furtive.

The hall, as I went toward her, didn’t improve.

The walls were hung with thick red paper. Red? It was again the red-black of the walls outside. Against the left wall stood a davenport and chair upholstered in black leather; huge things, such as you still see sometimes in old hotel lobbies. A bookcase of grimed golden oak stood next; behind its dirty glass I could see book agents’ sets of unreadable authors, shelves of cheaply bound novels.

As I stepped past the door on the left I had an even stronger whiff of cellars. Suddenly a slack gray female alley cat shot out from that door, across my feet, flattened herself, and crawled under the bookcase.

“You’d like ’em. Show me a person likes animals, and I show you a good person.”

Stairs rose beyond the room from which the cat had come; then I was at the doors to which the woman beckoned me.

I had a surprise.

The room into which I looked was nice.

The woman—she hadn’t told me her name yet—had sense enough to close the double doors behind me quickly. And this room didn’t smell. Not after the hall, anyway. It ran the entire width of the house and was extended at each side by bays of three windows. The back wall, opposite the doors, was filled with shelves and drawers; it was an old-fashioned built-in buffet, but it was exquisitely done. It, and the rest of the woodwork, had been ivoried; the paper was soft rose; the rug had been a deeper rose, its flowers long stepped into their background. A new brown studio couch, a good one, along the wall beside the doors. White curtains. Gateleg table and dining chairs in one bay; green upholstered chair, table and lamp in the other.

“This is really nice.” I hoped I didn’t sound as surprised as I was.

“And the other room?”

“Yes, yes, indeed! The other room!” She limped toward a door beside the buffet, swung it open.

The kitchen made me forget the hall.

The good old American kitchen, celebrated in song and story, reminiscent of pumpkin pies, stuffed chickens, applesauce, and gingerbread. Cupboards around the walls, bright linoleum on the floor, a big table against the back window, green rag rug in front of the table, a family-size gas stove, a cavernous icebox. This was a kitchen still holding the furnishings of its heyday, when a dexterous cook had ruled over the feasts of some early great.

It was no dirtier than a little scrubbing would remedy.

“Where do the three doors on this west wall lead to?”

“This middle one, that’s a lavatory.”

I hadn’t expected that. Chalk one up for a private toilet and washbowl.

“The first door’s locked. It goes down cellar. We don’t ever use these back cellar stairs anymore.”

“You wouldn’t ever use that. And this here door . . .” She paused, and her eyes seemed to focus on a point three inches east of my face. “This here is a closet I keep some of my things in. There ain’t any closets in the front of the house, and seeing the back has so many, it seems like the people back here don’t need it. I used to live in this part myself. I used to live on this whole floor, but now I rent out the back, except I always keep this closet.”

It was true I wouldn’t need that closet; the short passageway from the kitchen to the other room had drawers on one side, a deep, narrow closet on the other.

I stood uncertain. The place was surely better than I could have expected, from the price. But that hall!

“There’s a many comes and looks at this place.” The woman stood beside but a little behind me again, her soft voice urging me over my shoulder. She never seemed to stand where I could look at her. “But there’s a many I don’t want.

“Chillern, now, I can’t stand chillern around. I’m a middle-aged woman, and my nerves ain’t as good as they were.”

She was sixty-five if she was out of the cradle.

“No. There’s only myself. I’m divorced.”

“One or two quiet men friends, now, I don’t object to. I know how girls are; they got to have men friends. But I don’t like my furniture broke.”

“I’ve never had any furniture broken.”

“You a working girl?”

“Oh.” I’d expected suspicion there, and got it. “I like my rent paid in advance. A week advance. And them as don’t pay up, I only give a day notice to vacate. I’m an old woman alone in the world and I got to pertect myself.”

“I have money in the bank . . .” I tried, again, to face her, but she again edged around so she kept her view of my half face.

“That’s fine, that’s fine,” she said. “But you oughtn’t to trust banks. I’d never keep a penny—” She stopped there, seemed to come to a decision; she came closer, took her light grasp of my sleeve. “You’re a nice girl, I can see; it would be lovely to have a nice girl in the house, almost like a companion to me. I don’t get so much chance to rent over summer, so many goes to the lake. For a nice girl like you, dearie, having a little trouble with her job and all, I could maybe let you have it for four dollars a week for the summer. Till September, maybe.”

Four dollars a week! That would leave me almost eighteen dollars a month to eat on. Heavens! I could almost go to movies! I took a breath.

We went back to her parlor for the receipt for the first week’s rent. As we passed the stairs I chanced to look up. On the wall of the landing was a shadow cast by some hall light upstairs, a shadow with a head on it, perfectly still.

Someone was standing there, listening.

Curious, I thought, and thought no more about it. 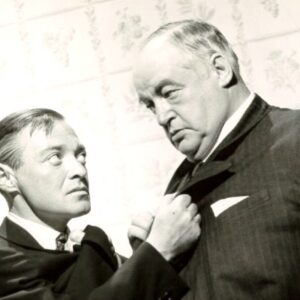 Peter Lorre and Sydney Greenstreet: Film Noir's Greatest Odd Couple Everyone loves an odd couple. “The Odd Couple” proves this—the premise is right there in the title—and for mystery...
© LitHub
Back to top