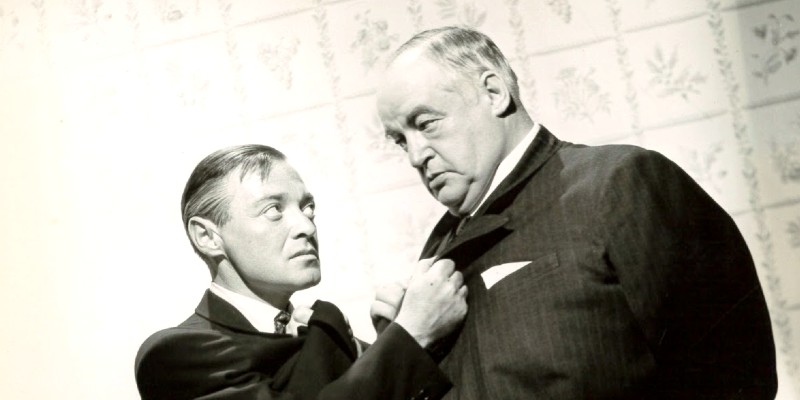 For two actors, a chance pairing in "The Maltese Falcon" conjured up a strange charisma—and an enduring partnership.

Everyone loves an odd couple. “The Odd Couple” proves this—the premise is right there in the title—and for mystery lovers, there’s the brilliant Sherlock Holmes and slow-to-the-solution Dr. John Watson. (Although the movies starring Basil Rathbone and Nigel Bruce went way too far in making Watson a dunderhead.)

But while Rathbone and Bruce was arguably the most notable on-screen pairing in mystery films, starring in 14 (!) movies between 1939 and 1946, they had competition as “most unlikely thriller partners” from Peter Lorre and Sydney Greenstreet.

Lorre and Greenstreet were, of course, memorably teamed in “The Maltese Falcon” in 1941 and “Casablanca” in 1943. They were the epitome of menace and duplicitousness. Greenstreet set the standard for the classic threatening underworld figure, while Lorre was the epitome of the slimy but strangely charming henchman.

As great as those films are—and as inexplicable as the plot twists and turns of “The Maltese Falcon” remain to this day—they only served to whet moviegoers’ appetites for more of Greenstreet and Lorre.

Through luck, happenstance and the vagaries of studio contracts and casting, moviegoers who appreciated Lorre and Greenstreet were happy to go to the movies to see them seven more times, including cameos in a movie that winked at their on-screen personas.

Lorre, who had made a name for himself in Germany and then in the states with thrillers like “M,” in which he played a horrifying killer, was certainly a “type” before “The Maltese Falcon.” Greenstreet was a revelation, though. The actor, known for his girth as much as his talent for delivering menacing lines, had not appeared in a movie before “The Maltese Falcon.” The British-American actor—who was 61 years old when he appeared in director John Huston’s adaptation of Dashiell Hammett’s 1930 mystery novel—had honed his craft in stage productions going back to 1902.

As Kaspar Gutman, referred to as “The Fat Man,” in “The Maltese Falcon,” Greenstreet was barely contained menace in a portly frame that usually didn’t lend itself to noir villains.

As henchman Joel Cairo, Lorre—sporting a dark curly perm—locked in the typecasting that stayed with him the rest of his career, into the 1960s, and created an easily imitated type. My childhood friend Jim and I could imitate Lorre’s voice and delivery and often did so, to the distraction of our parents. (Yes, we were odd children.) 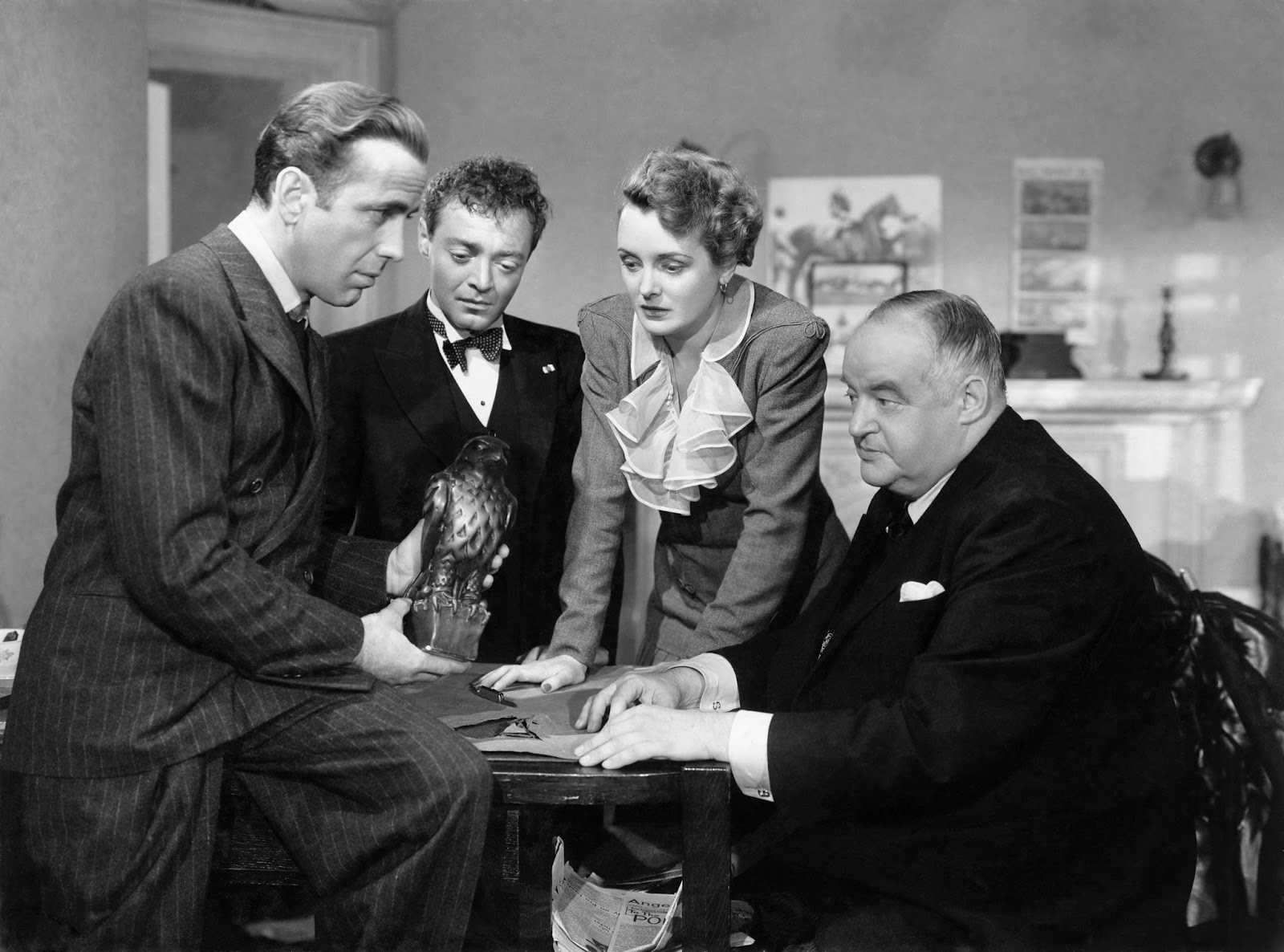 Thankfully, Warner Bros., which had released “The Maltese Falcon” and “Casablanca,” had Lorre and Greenstreet at its disposal and kicked off a truly interesting series of joint appearances.

The pair’s first movie after “Casablanca” is somewhat disappointing for modern-day fans, as they took a backseat to George Raft, whose Hollywood stardom was firmly established by this time.

“Background to Danger,” released in 1943 and based on a novel by Eric Ambler, featured Raft as an American in Turkey during the war.

It’s Greenstreet who drives the plot, however, and he’s wonderful as Nazi Colonel Robinson who, in 1942, tries to bring neutral Turkey into the war by any means. Raft’s two-fisted American, who just happens to be a spy, is drawn into the plot when he runs across Nikolai Zaleshoff, a Russian spy played by Lorre.

The movie’s melodramatic lines were just made for Greenstreet’s delivery, notably, “We Nazis do not relish failure.”

An attempted assassination, a couple of train journeys and an assault on a newspaper office later, Raft’s spy triumphs and, predictably, things don’t go well for Lorre and Greenstreet.

(As a longtime newspaper reporter and editor, I really enjoyed how the climax hinged on whether the publishing of a newspaper story could be prevented.)

This one, featuring Henreid running around Europe blowing up Nazi installations, introduces a group of freedom fighters in Lisbon, Portugal, which is said to be the last free port in Europe but seems not free at all, as local officials are all too eager to crack down on resisters.

Greenstreet leads said resisters and Lorre is a prominent member. They help Henreid’s Dutch spy carry out his mission and he helps them ferret out a traitor within their group. The story climaxes in a genuinely tense scene in a casino, with the resisters, Portuguese authorities and Nazis waiting to see who will try to send a secret message through a bet placed in one of the games.

That same year, 1944, the two teamed up in what I think is their best co-starring screen outing.

‘This is not a detective story!’

“The Mask of Dimitrios,” released by Warners a few months before “The Conspirators,” is another film drawn from a novel by Eric Ambler and is set in Europe in 1938.

Although Zachary Scott plays the titular Dimitrios, a smuggler and criminal, the real stars are Lorre and Greenstreet.

Lorre, at his oddly charming best, plays Leyden, a Dutch mystery writer who is looking for the subject of his next book. He stumbles across the story of Dimitrios, whose body has washed ashore near Istanbul.

Leyden hears some tantalizing details of Dimitrios’ scandalous life from a local police official and, intrigued, begins to fill in Dimitrios’ backstory as he travels through Europe, interviewing people whose lives were shattered by Dimitrios’ treachery.

Unknown to Leyden at first, his moves are being shadowed by Peters (Greenstreet), a mysterious figure who has his own history with Dimitrios. 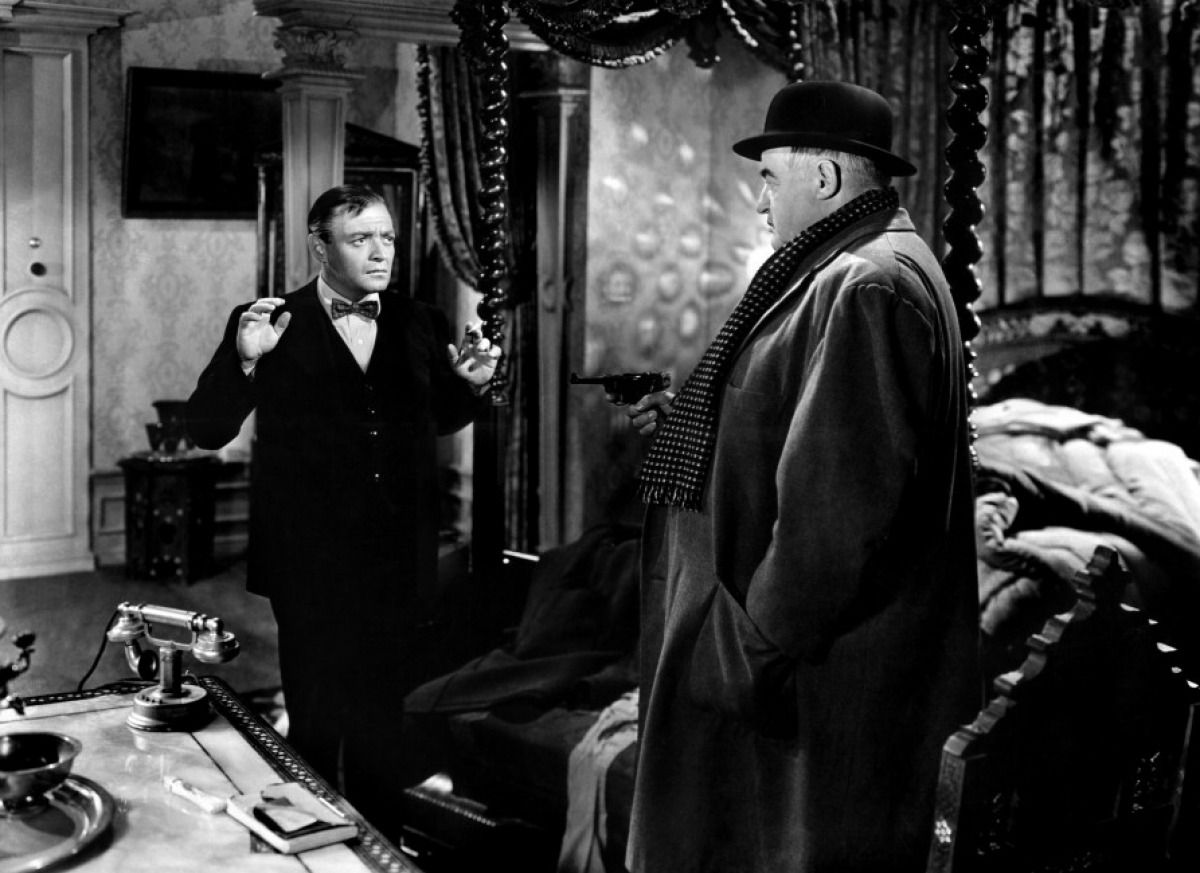 As the two move across Europe from hotspot to hotspot, they form a working relationship and even a friendship. They also make enemies, leading to such delightful scenes as when the jovially menacing Greenstreet insists to Lorre, “This is not a detective story!” and Lorre gets peevish when he’s threatened at gunpoint.

“Mask of Dimitrios” is, at least to me, the peak of the Lorre and Greenstreet movies. But thrilling outings were still to come.

It’s also one of the most oddly constructed movies of all time, with World War II-era French captain Rains telling a reporter about how he met French airplane gunner Bogart. During the telling, the flashback to how Rains met Bogart, Lorre and Greenstreet flashes back to the infamous French penal colony Devil’s Island and, from there, to how the prisoners escaped and, in a further flashback, how Bogart’s character came to be sent to Devil’s Island in the first place.

Lorre is good as one of Bogart’s fellow prisoners and Greenstreet plays a French military commander who embraces his country’s puppet Vichy government. He sets into motion a climax in which a German plane tries to shoot a French boat out of the sea.

If “Passage to Marseille” sounds stuffed, it is. And while I would have loved to have seen even bigger roles for Greenstreet and Lorre, it’s truly a classic wartime film.

A farewell to the partnership

The pairing of Lorre and Greenstreet began to wind down in 1946 with “Three Strangers.” It’s a shaggy dog story in some ways but it gives the spotlight to Greenstreet and Lorre, who play Brits who share a sweepstakes ticket with troubled, beautiful Geraldine Fitzgerald.

The key to the story is that Fitzgerald chose Lorre and Greenstreet to share in the sweepstakes ticket because they were strangers and, on Chinese New Year, she believes an idol will give them fame and fortune.

There’s something of an anthology feel to “Three Strangers,” with Fitzgerald, Greenstreet and Lorre playing out their own separate stories before coming together at the end to try to collect their fortune. Needless to say, the fortune was much more ill than providential. 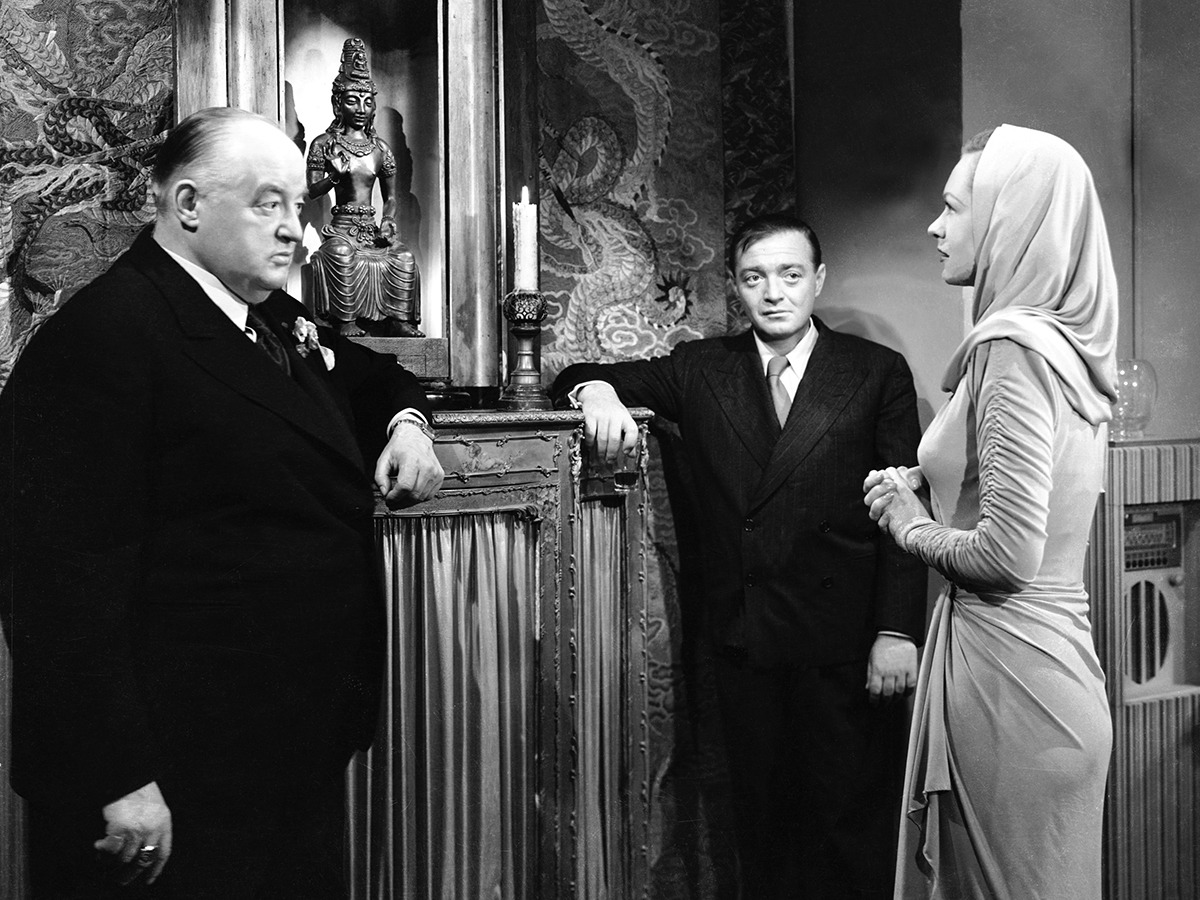 In a recent airing on TCM, it was explained that “Three Strangers” was initially intended as another reunion project, with Humphrey Bogart as the affable drunk that Lorre ended up playing and Mary Astor as the superstitious fortune seeker that Fitzgerald ultimately played.

The same year as “Three Strangers,” Warner Bros. released a pairing of Greenstreet and Lorre in a fictional setting that was different, to say the least. “The Verdict” was, rather than a World War II era suspense film, a period drama set in foggy, gaslit London of 1890.

It’s Greenstreet’s movie for certain but Lorre is an important second. Greenstreet is the superintendent of Scotland Yard and takes responsibility when an innocent man is convicted of murder and hanged. He loses the job he loved and was good at.

But the disgraced superintendent, with the quiet assistance of Lorre as his friend, sets out to make his successor as superintendent look bad by—spoiler alert for a movie released in 1946—committing the perfect murder.

“The Verdict” gives Greenstreet and Lorre plenty of moments to share and although it’s not the equal of “The Mask of Dimitrios” by any means, it’s good to see them on screen together.

The unofficial duo had one other, much lighter joint appearance on the big screen.

By the time of “Hollywood Canteen” in 1944, they were so well known and so well paired that they could, like Boris Karloff or Bela Lugosi, play off their well-established personas.

“Hollywood Canteen” was a morale-boosting, feel good film cheering on the war effort, so when a G.I. steps on the toes of an Andrews sister (Patty) with his over-enthusiastic dancing (and boorish behavior), Greenstreet enters stage left and, menacingly, asks the soldier about his intentions toward the young singer. As the G.I. hems and haws, Lorre appears out of nowhere and—despite his diminutive size compared to not only Greenstreet but the soldier—adds another layer of intimidation. The G.I. rushes away.

“Are we?” Greenstreet asks, an incredulous expression playing across his face.

Greenstreet’s health problems didn’t leave him much time to savor his movie career. He died in 1954. He didn’t make a film after 1949, although he played detective Nero Wolfe on radio in 1950 and 1951.

Lorre died in 1964. He left fans with a body of work that included outright classics like “Arsenic and Old Lace,” “20,000 Leagues under the Sea” and a handful of Roger Corman movies, especially the genuinely funny “The Raven.”

And he inspired weird little Indiana kids to imitate his voice.

Keith Roysdon is a frequent contributor to CrimeReads and other online news and pop culture sites. He is a Tennessee-based writer whose fourth co-written true crime book will be published by History Press in 2023. His crime novel “Seven Angels” won the 2021 Hugh Holton Award for Best Unpublished Novel from Mystery Writers of America Midwest. He’s writing a young adult crime novel set in October 1984. 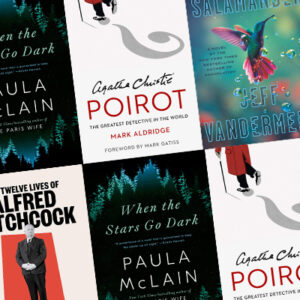 A look at the month’s best reviewed crime novels, mysteries, and thrillers. Jeff VanderMeer, Hummingbird Salamander...
© LitHub
Back to top