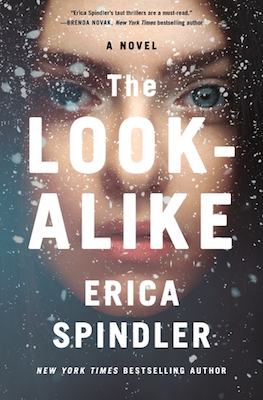 The following is an exclusive excerpt from The Lookalike, by Erica Spindler. It is a terrifying story of a young woman who increasingly believes that she, not the victim, was the intended target of a murder that she witnessed many years ago. And not only this—but that the killer may be trying to finish the job now.

Chief Thompson ushered her across to the couch, then took a seat directly across from her. He met her eyes. “I have to ask you some questions. About tonight. Do you understand why?”

“I think so.” Her voice sounded wooden to her own ears. The way her mother’s sometimes did, after one of her flare-ups.

“You were first to the scene. You know what that means, right?”

Like everyone else, she watched crime shows. She swallowed hard and nod- ded, head filling with the image of red snow. “Am I a suspect?”

“In terms of investigative protocol, yes. But do I think you killed her? No, of course I don’t.” He shifted in his seat, but didn’t take his gaze off her. She had a feeling that gaze missed nothing. Like he could see her wildly beating heart, read her fearful thoughts.

“But,” he continued, “I can’t summarily dismiss anything. That would make me a very poor cop.”

He smiled slightly. “That’s right. That’s also why I’m going to make notes of what you say. I don’t want you to be nervous about that. It’s part of the process.” “Okay.” She folded her hands in her lap. She realized how cold they were.

He reached into his jacket pocket and brought out a photo. He held it out. “Do you know this girl?”

Brown eyes and hair. A dusting of freckles across a pert nose. An earnest smile.

Red snow. A white parka. A sensation like ice cracking beneath her skates.

Her hands began to shake.

“Yes. From the library. Her name’s Madi.”

Her head went light. Sienna told herself to breathe. “I saw her tonight.” “At the library?”

“She works there. I see her every Wednesday night.” “Were you friends?”

Sienna shook her head. “I know her from there. She’s older. A junior, I think.”

“How did you happen to be out so late in such bad weather?” “I have study group every Wednesday night.”

“You didn’t consider skipping tonight, because of the snow?” “No.”

“There’s a test scheduled tomorrow. We figured classes would be canceled, but none of us wanted to take a chance.”

She found it an odd question. “No. Two girls, two guys.”

“I don’t understand, why would you need their names?”

He didn’t seem at all offended by her question. “A couple reasons. The first, to corroborate your story. And second, they were out around the time of the murder. I want to talk to everyone who might have seen or heard something.” She swallowed hard. “Oh, okay.” She rattled off her study partners’ names.

When he finished writing them down, he looked back up at her. “They didn’t walk out with you?”

“We walked out together, but they all live in Parker Hall. I’m in Manchester.”

“By the way, what subject were you studying?”

He nodded slightly. “You said you saw Madison tonight?”

She shook her head. “She wasn’t at the circulation desk when I left.”

He looked at her oddly, then made a note in his notebook. He’d told her not to be bothered by his note taking, but it made her feel weird. Like she was guilty of something.

“You left the library. What time was that?”

“You didn’t stop to talk to anyone?”

“I was anxious to get back to the dorm, because of the weather. Besides, there was nobody around. The way I go, there rarely is. It’s a shortcut.”

“You always go the same way?”

“The same way. Every Wednesday night.”

Again, the odd look. “That cut-through is pretty isolated. You don’t worry about that, especially at night?”

“Sometimes. But I force myself.”

“You force yourself,” he repeated. “Why’s that?”

Sienna looked down at her clenched hands, then lifted her gaze back to his. “Because of my mom. Because she’s always afraid.”

She saw that he understood. Of course he did. Anyone who’d lived in Tranquility Bluffs any time at all would.

And such a shame her daughter’s just like her.

“So, same as always, you take the path between the Humanities and Social Sciences buildings. Did you see anyone?”

Sienna thought a moment, trying to pull out any detail she might have passed over at the time. After a moment, she shook her head. “The wind. I just wanted to get back to the dorm.”

“How did you find the body?”

The body. That sounded so dispassionate. Like a thing, not the living, breathing person who had smiled at her only hours before.

Not breathing. Not anymore.

Her voice changed. Seemed to vibrate. Like a finger on a too-tight wire. “My hood . . . I could only see the path right in front of my feet.”

Article continues after advertisement
Her throat closed. She struggled to clear it. “I’m not sure what happened next. I don’t know if I slipped or tripped. I went down. On my knees. And—”

Her throat closed. She struggled to clear it. “I’m not sure what happened next. I don’t know if I slipped or tripped. I went down. On my knees. And—”

“And what?” he prodded, tone gentle.

Her father burst into the room. She saw her usually immaculately groomed brother was with him, tonight looking completely disheveled. In another situation, she would have teased him about the way his hair stuck out in every direction.

“That’s enough!” Her father barked, both of them striding to her side. As they neared, she caught a whiff of alcohol. “You’re done.”

Chief Thompson didn’t move. He held her gaze. “If you think of anything, recall anything, no matter how insignificant or outlandish you might think it is, bring it to me. Promise me you will.”

She nodded and he handed her his card. “My number’s on this. If you think of anything at all, call me. Any time. Day or night.”

The Strange Rural Noir of Wilma Dykeman’s The Tall Woman 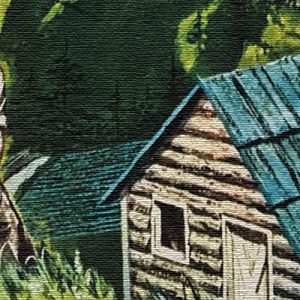