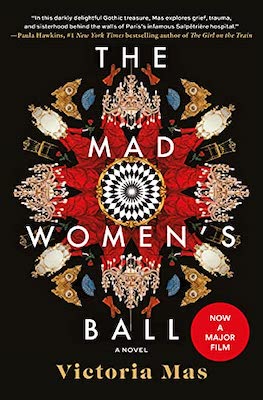 The following is an exclusive excerpt from The Mad Women's Ball, by Victoria Mas, and translated by Frank Wynne. In 1885 Paris, the hypnotist Dr. Charcot entertains the city by entrancing the madwomen of the The Salpetriere Asylum, who are presented to society once a year at an opulent ball. That's where a nurse, Genevieve, meets nineteen-year-old Eugenie, who sees spirits. And is determined to escape.

Her hand emerges from beneath the covers to caress her granddaughter’s dark hair, but Eugénie is no longer looking at her: her attention is focused elsewhere. She is staring at a corner of the room. It is not the first time that the girl has frozen, gazing at some point in the idle distance. Such episodes do not last long enough to be truly worrying; is it some idea, some memory flashing into her mind, that seems to trouble her so deeply? Or is it like that time when Eugénie was twelve and swore that she had seen something? The old woman turns to follow her granddaughter’s gaze: in the corner of the room there is a dresser, a vase of flowers and a few books.

Eugénie comes back to herself and strokes her grand- mother’s hand.

She is not going to reply that, yes, she can see something—or rather, someone. That it has been a while since she last saw him, and that she was surprised by his presence, even if she had sensed that he was coming. She has been seeing him ever since she was twelve years old. He died two weeks before her birthday. The whole family was gathered in the drawing room; that is where he appeared to her for the first time. ‘Look,’ Eugénie had exclaimed, ‘there’s Grandfather, he is sitting in the armchair, look!’—convinced that the others could see him too—and the more they contradicted her, the more she insisted, ‘Grandfather is right there, I promise you!’ until her father rebuked her so sharply, so violently, that on subsequent occasions she did not dare mention his presence. Neither his presence, nor that of the others. Because, after her grandfather had visited her, a number of others came too. As though seeing him that first time had released something in her—some sort of channel located near her sternum, that is where she felt it—something that had been blocked and was now, suddenly, open. She did not know the other figures who appeared to her; they were perfect strangers, men and women of various ages. They did not all appear at once either—she felt them arrive gradually: her limbs would become heavy with exhaustion and she would find herself drifting into a half-sleep, as though her energy were being sapped by something else; it was then that they became visible. Hovering in the living room, sitting on a bed, standing by the dining table watching them eat supper. When she was younger, these visions had terrified her, immured her in a painful silence; had it been possible, she would have thrown herself into her father’s arms and pressed her face into his jacket until the vision had left her alone. Bewildered, she was; however, she felt certain of one thing: these were not hallucinations. The feelings provoked by these apparitions left her in no doubt: these were dead people, and they had come to visit her.

One day, her grandfather appeared and spoke to her; or, to be more precise, she heard his voice inside her head, because her visitors were always mute, their faces impassive. He told her not to be afraid, they wished her no harm, that there was more to fear from the living than the dead; he told her that she had a gift, and that they, the dead, came to visit her for a reason. She had been fifteen by then, but that initial terror never left her. With the exception of her grand- father, whose visits she came to accept in time, she pleaded with the others to leave as soon as they appeared, and they did so. She had not chosen to see them. She had not chosen to have this ‘gift’, which seemed less of a gift, more of a mental dysfunction. She reassured herself, told herself it would pass, that when she left her parents’ home all of this would disappear, and that in the meantime she had to remain silent about it, even with her grandmother, because if she were to mention such a thing even once, she would instantly be carried off to the Salpêtrière.

The following afternoon, the snowfall offers the capital a brief respite. Along the white streets, gangs of children launch icy salvoes from behind benches and streetlamps. Paris is illuminated by a pallid, almost blinding light.

Théophile emerges from the building’s carriage entrance and heads towards the waiting hackney cab. His red curls spill out from beneath his top hat. He pulls his collar up to his chin, quickly slips on his leather gloves, and opens the door. With one hand, he helps Eugénie into the coach. She is swaddled in a long black coat with flared sleeves and a hood; her hair is drawn up into a chignon, surmounted by a pair of goose feathers – she has no taste for the flowery lit- tle hats that are all the rage now. Théophile approaches the coachman.

‘Take us to 9 Boulevard Malesherbes. Oh, and Louis, if my father should ask, I went there alone.’

The coachman mimes stitching his lips closed, and Théo- phile climbs into the carriage next to his sister.

‘Still nettled, oh brother of mine?’ ‘You are most nettlesome, Eugénie.’

Shortly after luncheon, a more peaceable meal since their father was absent, Théophile had retired to his room for his customary twenty-minute nap before preparing to go out. He had been standing in front of the mirror, putting on his top hat, when there came a knock at the door. Four raps, his sister’s knock.

Eugénie had opened the door; she was dressed for an outing to the city.

‘Are you planning to go to a café again? Papa will not approve.’

‘No, I am coming with you to the salon.’ ‘Certainly not.’

‘You have not been invited.’ ‘Well then, invite me.’

‘You see, you do not really want to go.’

‘I wish to see what it is like, just this once.’

‘We gather in a salon, we smoke and sip coffee and whiskey, and we claim to philosophize.’

‘If it is as tedious as you describe, then why do you go?’ ‘That’s an excellent question. Social convention, I suppose.’ ‘Let me come.’

From The Mad Women’s Ball by Victoria Mas and translated by Frank Wynne. Used with the permission of the publisher, Overlook Press. Copyright © 2020 by Victoria Mas. 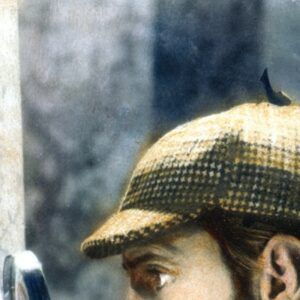 The American Rivals of Sherlock Holmes We all have a picture in our mind of the archetypal detective of American fiction. The hardboiled, wisecracking private eye,...
© LitHub
Back to top