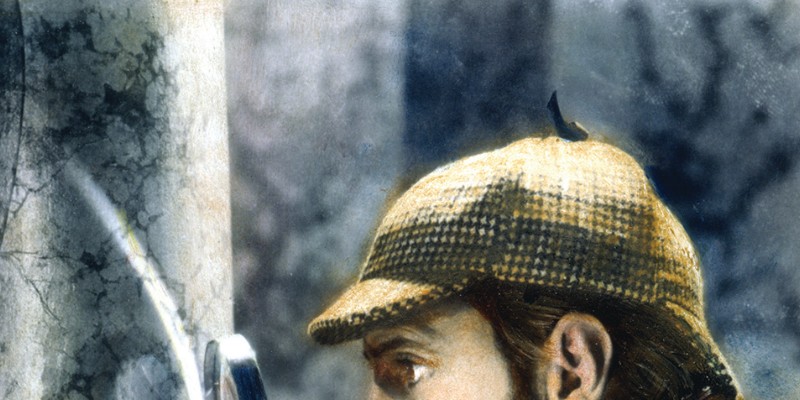 Nick Rennison on the early days of American detective fiction and the sleuths who competed with Sherlock Holmes for mystery readers.

VIA NO EXIT PRESS

We all have a picture in our mind of the archetypal detective of American fiction. The hardboiled, wisecracking private eye, walking a city’s mean streets. Dashiell Hammett’s Sam Spade, Raymond Chandler’s Philip Marlowe or one of the hundreds, probably thousands, of other gumshoes who have trodden in their footsteps. But that style of detective only came into being in the late 1920s and early 1930s, most influentially in Hammett’s novels and in the pages of the legendary magazine Black Mask. American crime fiction has a much longer history. 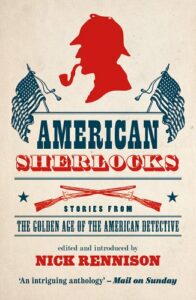 It begins, of course, with Edgar Allan Poe. (The history of most genre fiction in the USA begins with Edgar Allan Poe.) His character C Auguste Dupin is the archetype of the detective hero with superior powers of deduction, and his influence on later creations is clear. For four decades after Poe’s death, the figure of the fictional detective was slowly established with readers of both dime novels and of more ‘upmarket’ literature. However, another character then had a profound effect on the ways in which they all imagined that figure. His name, of course, was Sherlock Holmes. His impact was to be felt just as much in the USA as it was in Britain. Although the first Holmes tale, the novel A Study in Scarlet, had to wait more than two years for an American edition – it was finally published by J. B. Lippincott & Co. in 1890 – the stories after that appeared almost simultaneously in the UK and across the Atlantic. Indeed, in some instances, Americans could enjoy Holmes’s latest adventure before his home readership. Some of the stories later collected in The Return of Sherlock Holmes, for example, were published in the US Collier’s Magazine a week or two prior to their appearances in the UK Strand Magazine. The Sherlock Holmes effect was soon evident. Just as in Britain, scores upon scores of rivals made their bow in books and magazines in the years between 1890 and 1920. These American rivals to Sherlock Holmes have been mostly forgotten but many deserve resurrecting from oblivion. Here are just 8 of my favourites.

Nick Carter is probably America’s longest-lived detective. He’s been around for more than 130 years, since he first appeared in a newspaper serial by John R Coryell entitled ‘The Old Detective’s Pupil, or The Mysterious Crime of Madison Square’ in 1886. The character proved popular and was soon the headline act in his own Nick Carter Weekly. Over the decades, Carter changed, turning from dime novel hero to Sherlockian consulting detective to hardboiled private eye. In the 1960s, he was even relaunched as a James Bond-style secret agent. He has been the star of comic strips, comics, radio series, movies and TV shows. There have been literally thousands of Nick Carter stories and they are still being written in the 21st century.

If Clinton Stagg had not died in a car accident in 1916 at the age of only 27, his name might well be much more familiar to readers of crime fiction today than it is. Some of Stagg’s best stories featured the blind detective Thornley Colton, a wealthy New Yorker who takes on cases purely for the intellectual interest they offer. Known as ‘The Problemist’, Colton is able to solve the mysteries he tackles through high intelligence and the fact that his other senses have been heightened by his disability. Plausibility wasn’t always Stagg’s strongpoint in his plotting but his stories were lively and full of colour and invention.

Comic crime stories rarely work very well. Comic crime stories that are more than a century old should be nearly unreadable but Ellis Parker Butler’s tales featuring Philo Gubb retain their charm. Philo Gubb works as a paper-hanger in a small Iowa town. He is also a Sherlock Holmes fan who is taking a correspondence course in how to be a detective. Whenever the opportunity arises, he tries to put into practice what he is learning, adopting a series of disguises which fool nobody and solving crimes more through amiable persistence and good luck than any deductive skills. Gubb himself is said to commit ‘a major crime during every case on which he works: the murder of the English language’.

Known as ‘The Scientific Detective’, Craig Kennedy is not well remembered today but he was once enormously popular. He appeared not only in short stories and novels but silent film serials, comic strips and a 1950s TV series. A professor of chemistry who applied his knowledge of science and an array of technological inventions to the solution of baffling crimes, Kennedy was the brainchild of Arthur B. Reeve and made his debut in a short story in December 1910. More than eighty further stories and over a dozen novels followed, narrated by his admiring sidekick, the journalist Walter Jameson. The technology Reeve presents as close to miraculous (X-Rays, lie detectors, Dictaphones) seems old hat today but the tales themselves remain entertaining.

Quincy Adams Sawyer began his career as a young attorney and the title character in a bestselling novel by Charles Felton Pidgin, published in 1900. In time, the character morphed into a professional private investigator, clearly influenced by Sherlock Holmes, in a series of engaging and well-written short stories. Pidgin had a varied career as a statistician, writer of musical comedies and inventor. (His unlikeliest invention was a method of displaying dialogue in silent films which involved inflated text balloons emerging from the actors’ mouths.) In his fifties, he turned to fiction and wrote more than a dozen novels, including a work of ‘alternative history’ in which Aaron Burr, exiled after a fatal duel in reality, becomes President of the USA and abolishes slavery half-a-century before Lincoln.

Craig Kennedy was not Arthur B. Reeve’s only detective character. He also created a number of other sleuths, including Clare Kendall, ‘a tall, striking, self-reliant young woman with an engaging smile’ who works as a private investigator. Clare had the same interest in cutting-edge technology as Craig Kennedy. In one story, ‘The Mystery of the Stolen Da Vinci’, she solves the crime using a telegraphone, a device for recording sound which had, as she remarks in the narrative, been recently patented by Valdemar Poulsen, ‘The Danish Edison’. Both ‘The Danish Edison’ and the telegraphone may seem like products of Reeve’s lively imagination but a swift Google search reveals that both genuinely existed.

In 1878, the poet Anna Katharine Green, disappointed that her verse had not received the recognition she had hoped for it, decided to try her hand at crime fiction. The result was The Leavenworth Case, which was a great success and launched her on a career as a mystery writer that lasted more than 40 years. Her character Violet Strange, who appeared in a 1915 volume of short stories, is an attractive young woman, a debutante at home amongst the upper echelons of New York society. She also leads a secret life as a professional detective, investigating crimes of all kinds to provide herself with an income of which her father knows nothing. The Violet Strange stories are skilfully crafted and entertaining, and their heroine is one of the most engaging of the era’s female detectives.

Arguably the most original of all the American detectives of this period, Uncle Abner was the creation of the lawyer and author Melville Davisson Post. Post’s God-fearing hero appeared in 22 stories, written between 1911 and 1928. Riding through the backwoods of West Virginia in the years before the American Civil War, he dispenses justice and wisdom under the admiring gaze of the narrator, his young nephew Martin. Although largely forgotten today, the Uncle Abner stories have had many admirers over the years since their first publication. In 1941, Howard Haycraft, one of the first literary critics to take crime fiction seriously, called Post’s character ‘the greatest American contribution’ to the cast list of detective fiction since Poe’s C Auguste Dupin.

Nick Rennison is a writer, editor and bookseller with a particular interest in the Victorian era and in crime fiction. He has written several Pocket Essential guides published by Oldcastle Books including Short History of the Polar Exploration, Roget, Freud and Robin Hood. His latest book is More Rivals of Sherlock Holmes: Stories from the Golden Age of Gaslight Crime, available starting in May 2019. 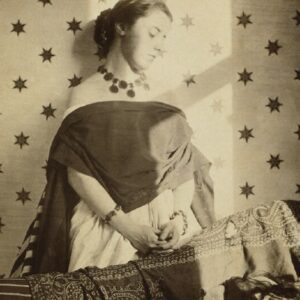 Ask any woman who writes fiction meant to shock or disturb about response to her work, and she will no doubt offer up at least...
© LitHub
Back to top