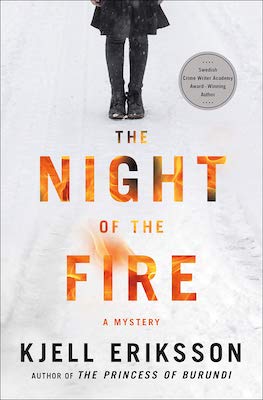 The following is an exclusive excerpt from The Night of the Fire, by Kjell Eriksen. Ex-police officer Ann Lindell has been spending her days in a quiet village, making cheese. But on New Year's Eve, a shelter for asylum seekers is burned down, leaving three people dead. Ann begins to investigate when she receives a message, that this is only the beginning, and many more people will die.

Stefan Sanberg was not a good person. That was common knowledge. Essential features in his set of social skills were lacking. He had probably never watched a romantic comedy with enjoyment, or voluntarily listened to a peaceful ballad.

Even his grandmother, who’d had the sense, or the weakness some might say, to overlook and forgive a lot throughout her life, was forced to agree. “He’s mean,” she would say, “because he only thinks about himself.”

For Evelina Sanberg, that characteristic was the most despicable, because she was familiar with circumstances where generosity was the only way to make life more or less bearable. She could even use the word “solidarity” without it sounding strange, having grown up in straitened circumstances in farmworker barracks in the village of Rasbokil. At that time in such quarters new ideas were circulating that the poor did not have the slightest problem accepting. In reality they were the ones who made the solemn proclamations meaningful, not least because they put force behind the words.

“Now it’s just claptrap,” she would exclaim when the talk turned to politics.

“But, Evelina, aren’t you happy here?” replied Aamino, who was a nursing assistant at the home where Evelina had spent the past few years.

“I’m just saying,” Evelina said, flashing her best crocodile smile, and the woman from Somalia smiled back, even though she had no idea what she meant.

Stefan was about seventy years younger than his grandmother. It was during that three-quarters of a century that Sweden was transformed in a strange pendulum movement: from building up, which Evelina took part in, to tearing down, which in the autumn of old age she could observe with increasing consternation. “There are documents for everything,” Ste- fan’s father, Allan, maintained, but that wasn’t really correct, because in his work as a self-employed carpenter there were quite a few under-the- table jobs. In every election he’d voted like his mother, but now he was having doubts.

The pendulum movement had contributed to making Stefan Sanberg  a heedless young man who could not spell “concentration camp,” much less Auschwitz, but eagerly posted pictures on the internet of ovens from there, as the final solution to the problems that tormented him and his friends. All born in the nineties. Obviously they had never experienced carpet-bombing, snipers, or boats that capsized. The most dramatic event during their childhood was when the school bus slid off an icy road and ended up at an angle, fortunately caught by a spruce tree so that no one was seriously injured.

Hate was their primary occupation. It was exhausting, because they hated so much, and so many.

“I’ll take them one by one,” Stefan Sanberg said, making a sweeping gesture toward the opposite side of the road, where the old school was fully lit up in the falling twilight. Advent stars were hanging in the win- dows and dark shadows could be glimpsed inside. There were those in the village who thought it looked cozy, like an exhibit in the local history museum.

The whole gang had gathered for a party at old man Ottosson’s run-down house. The old man himself was languishing in a nursing home, but a grandchild had a key, and the gang usually met there. Beer and liquor had flowed, and no one really believed Stefan’s bluster. They’d all heard him carry on before. A few listened more carefully, and perhaps were influenced, while others sneered.

One of those who was listening was Sebastian Ottosson. He was a listener, who often sat quietly. For that reason he could pick up on judgmental, meaningful glances, and not least become aware of suppressed emotions that could take the most peculiar expression. He read between the lines, knew to take the right position, and there was probably nothing wrong with that. He did like the rest. The problem was his surroundings.

Sebastian stood by the window, observing the old school. He went there a couple of years before it was closed down, but that was not anything that influenced him. There was no nostalgia, no memory that could counter- balance what he felt before its illuminated windows.

If darkies are going to live there, then it’s completely worthless, he thought. He knew that he would inherit the house, his grandfather had told him that. Sebastian had ideas about what he would do. A few acres of pasture- land were part of the property, and Sebastian had fantasized for a long time about raising sheep and goats. It was a dream that few knew about, but he had figured it all out quietly. He knew that there was a market for goat’s milk. He could manage it, maybe by working extra at Sandvik to start with or somewhere else. But blacks as neighbors? They would surely steal his milk and animals. People like that eat goats, he’d heard. What was it called, hammal butchering or something?

It was a blindingly beautiful New Year’s Eve. In the days after Christmas it had snowed heavily before clearing up on the last day of the year. The whole village, even the properties with dilapidated fiber cement fa- cades and moldy verandas in shadow, and the farms stained with rural melancholy, was embedded in a conciliatory white blanket. Abandoned farm machinery looked like prehistoric animals dressed in white fur. The roads were edged by snow-burdened spruce and over the fields the ice crystals sparkled. At the edges of the fields, surrounded by inhospitable thickets and invasive aspen trees, deer stood, hesitant, before they stepped out in the open to scratch out a rotting potato under the blanket of snow on Waldemar Mattsson’s parcel. The wind was stiff and it would pick up during the afternoon.

And naturally that made the firefighting harder in the blaze that would later light up the whole central village.

“They can’t even shovel snow, damn it,” Mattsson’s youngest son, Daniel, said. His father had a municipal contract, so snow removal was Daniel’s specialty, which he liked to talk about, especially after three days of intensive plowing on squares and parking lots and cul-de-sacs in a residential area in Gimo. In other words he was worn out and therefore susceptible. The weather forecast had promised that New Year’s Day would also be clear, so he’d gotten permission from his father to go to the party and even drink some alcohol. He maintained that he fell asleep a couple of hours before the old year turned into a new one, and would therefore be freed from all suspicions about participation in arson.

For arson it was, everyone was convinced of that, even if the investigation could not prove it unambiguously. There was talk of lit candles that were left in the kitchen, covered heating elements or overload in the electrical system in the antiquated school, which had not been maintained  for several years but could now serve as a residence for seventeen men, thirteen women, and nineteen children. All victims of persecution and war. All in flight.

That night the temperature was eight degrees Celsius. The sky glistened with starlight, but who could appreciate that when the rays were hidden by grayish-white smoke in the freezing wind?

Gösta Friberg stood as if petrified, supported by the kitchen table, on trembling legs, with his feet stuffed in sheepskin slippers and with a damp spot that was growing on his flannel pajamas, a kind of afterbirth to his visit to the toilet. The glow from the burning school created a ghostly fluttering in his kitchen. The rain of sparks came like swarms of countless fireflies.

He had seen everything, or had he? It had happened so quickly, when as was his habit after a trip to the toilet he looked out from his upstairs window. The shadowy figures that were outlined against the snow had moved quickly, there were two or three of them, at first he couldn’t decide.

They came from the storage shed and were heading for the south end of the school building, the one that faced toward his house. The view was partly hidden by the lilac thicket that had always served as the boundary between the school property and his own. They moved ahead clumsily in the snow, one of them fell down, but was quickly helped up. But there had definitely been three of them.

It was not just the darkness and their hurried movements that confused him, the whole scene was like a hallucination. Sometimes he hallucinated, especially during the nocturnal trips to  the  toilet  when  in the borderland between sleep and waking he thought he saw and heard things. Irma had laughed at him many times when in the morning he told about his nocturnal experiences. “You should write a horror novel,” she’d said on one occasion, and Gösta had felt offended, even though he knew she didn’t mean anything bad. For him it was almost reality, and he didn’t like that she belittled his revelations. It was as if things really did happen, or could conceivably happen in the future.

That was the kind of feeling he got as the shadows were moving in the night. On the days that followed he would recall the sight in his memory, and the outlines gradually sharpened. At last he knew what he had seen and that what he’d seen was reality. He was still a little uncertain about who it was, but fairly sure. The one who ran first, leaning forward like a soldier in battle, Gösta had seen so many times that despite the darkness and the pulled-down cap, he was rather easy to identify. Even so he doubted himself and his impressions.

Flames started greedily licking the facade, at several places at the same time. The blaze quickly took hold in the century-old timber. Soon the whole school was on fire, burning along the full length of the facade. The top floor, which housed a schoolroom and the old teacher’s apartment, was already in flames. A broom of fire sprayed in the brisk wind like a blowtorch from the roof, which had partially collapsed. Everything happened so fast. He understood that nothing could be saved. Through the thicket of bushes he could see groups of people. They stood strangely quietly, as if they were attending a bonfire.

Gösta sank down on a chair. Naturally he should have called for the fire department and then gone out to see if he could help out, but the paralysis would not let go. “There is nothing to do, the school is lost,” he repeated again and again to himself, mumbling, “fire always wins.” Then, during those ghastly hours in the kitchen, it did not occur to him that people could be injured. That was of course an incomprehensible error, a self- betrayal that was grounded in his own panicky terror of open fire.


Kjell EriksenMinotaurThe Night of the Fire 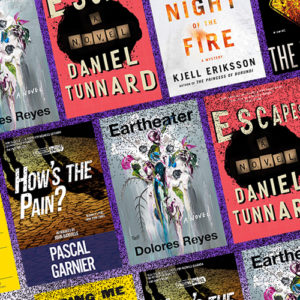 7 International Crime Novels You Should Read This November Winter is coming (or perhaps, metaphorically, is already here), and whether you're looking to embrace the cold through Northern...
© LitHub
Back to top