The following is an exclusive excerpt from The Persuasion, by Iris Johansen. Forensic sculptor Eve Duncan and ex-Navy Seal Joe Quinn are terrified when they learn that their daughter Jane's talented artistic skills have caught the attention of a murderous psychopath. The only person who can help keep Jane safe is her love Seth Caleb. But when Jane confronts the madman herself, things spiral out of control, especially when she learns that what he's after is Seth Caleb. And he wants him dead.

The setting sun was casting silver-blue lights over the crashing surf as Caleb landed the helicopter in the courtyard of MacDuff ’s Run.

Beautiful, Jane thought. She’d have to remember to paint that particular view the next time she was here. She’d already painted the castle many times, but there was always something different to discover and beguile her here. She’d grown to love everything about MacDuff ’s Run when she’d first visited all those years ago. The place was full of mystique and atmosphere and seemed to breathe of the Highlands and the generations of Scots who had built their castle on this craggy coast.

“Spectacular.” Caleb was looking at her expression as he set the helicopter down. “It’s no wonder you like to visit here. I hate to think that the memory of last night’s murder might mar the thought of it for you.”

“It won’t.” Jane saw MacDuff coming across the courtyard and opened her door. “I first came here because I was tracking the history of Cira, who created the dynasty of the MacDuff family. But I learned a good deal more by the time I left. This place has seen centuries of battles and death and mayhem. It’s all woven into the fabric of what it is. You just have to accept it, avenge it, and start all over again.” She jumped out of the helicopter. “Memories should  be kept alive only if they’re happy or they teach you something.”

“Oh, I agree.” Caleb grinned. “I just didn’t think you’d be quite so willing to embrace that philosophy. You’re usually a bit more gentle. Perhaps you are Fiona’s descendant.”

She shook her head adamantly. “Don’t get MacDuff started on that.” She was walking toward MacDuff as she spoke. “Eve and Joe are all I’ll ever need.” But she was smiling at MacDuff, and the next moment he was enveloping her in a warm hug. “You should have told me about this, MacDuff,” she said when she broke free. “It might be weird and scary as hell, but I had a right to know.”

“Not weird enough to keep you away from here,” he said dryly. “I thought Caleb might have the sense not to tell you about it. I gave him too much credit.”

“I wanted to see it,” Jane said soberly. “It’s crazy, MacDuff. Why would anyone . . . ” She trailed off. “But we’ll have to find that out.” She turned and headed for the front door. “No one was able to identify the people who did this?”

He shook his head. “Two sets of footprints and the treads of a van in the dirt outside the gate. We’re checking out the rest. Inspector Tovarth said the theft was very well planned, the timing impeccable, very professional, so he’s researching similar thefts worldwide. He’s also looking into the possibility of bribery to the staff. Though I told him that’s hardly likely with my staff.” He followed her into the hall. “But no one appears to have seen the thieves, and there’s  no hint  of the real reason why the Fiona was taken and not one of the two Sargents in my collection.”

“Except that they wanted you to believe it had something to do with me.” She smiled. “And you promptly attacked Caleb.”

“He survived it.” He shrugged. “Caleb always survives. It seemed a possible direction. That blood was . . . disturbing.”

“And so am I,” Caleb said as he caught up with them at the door of the gallery. “Understandable that you made the connection. No hard feelings. Well, maybe a few . . . ” He looked at Jane. “Ready?”

“That’s why I’m here.” She braced herself and entered the gallery. The blood on the wall was darker than it had seemed in the picture on Caleb’s phone. It was dry now and not dripping around the photo in the center of the cross. Caleb had told her this photo wasn’t the original one he’d shown her in the car. The knowledge should have made it appear less horrific, but somehow it didn’t. Neither did the blood spattered on the wall. It only reminded her of one of those Rorschach inkblots that were supposed to reveal the personality of the observer. She said it out loud. “Rorschach inkblots.”

Caleb nodded. “Maybe. Only an artist would have seen that possibility. But then what’s he trying to say about your personality? Or his own?”

She shook her head. “I’ve no idea. It just occurred to me. He stole Fiona’s portrait. She looks like me. Maybe he thought I was trying to steal her thunder.” She glanced at MacDuff. “Do you have any disgruntled relations running around who might have thought they should have a portion of your august heritage?”

“Not to my knowledge. Until recently all my kith and kin were running the other way because of the taxes on the estate.” MacDuff grimaced. “Just as you were, Jane.”

“Not because of the taxes,” Jane said. “Because I already have a family I love. And anyone with a right to this place would be crazy not to want it.” She added softly, “It’s a magical place, MacDuff.”

“I think so,” he said teasingly. “But it’s  good to hear you  admit  it at last. You’ve been very snooty about your precious American upbringing. And they say we Scots can be arrogant.”

“And so you are.” Jane took a closer look at the photo. “But I don’t think this photo was taken here in Scotland.” She was frowning. “I recognize that lake . . . I think I did a sketch of it last year.”

“Italy. The lake country. I spent several months there.”

And someone else had spent time in that beautiful countryside at the same time, she thought as cold iced through her. Someone with a camera, watching her, aiming, shooting that photo. How close had that murderer been to her? Had he been planning on how he was going to layer that blood onto the photo—

“Stop thinking about it.” Caleb’s hand was on her arm. “Don’t worry. We’ll track him down and find out who took it. You  stayed in Mantua, didn’t you?”

“Yes.” Of course Caleb knew that. Michael had probably told him, she thought with exasperation. “But I wouldn’t bet on us finding out who took it. Everyone has a camera these days. It’s the world of the iPhone.”

“I will bet on it,” he said. “Because it’s also the world of data- bases and a zillion high-tech methods to find the answers.” He added grimly, “As well as a few more ancient methods guaranteed to extract information. I’ll get on it right away.”

“It’s good to see you so eager,” MacDuff said silkily. “I wonder why? It’s positively inspirational.”

“Enough,” Caleb said. He turned to Jane. “He just wants to remind you that my family home of Fiero has been located in that section of Italy for centuries. In case you’d forgotten that my sister was kidnapped from Fiero by the cult.”

“I hadn’t forgotten.” Jane glanced at MacDuff. “Caleb and I talked about it before I came here. I’d never forget a tragedy like that. But Caleb had nothing to do with it, just as he has nothing to do with what happened here last night. So back off, MacDuff.”

“Such loyalty.” MacDuff tilted his head. “I’ve heard you can be very persuasive, Caleb. But I felt I should bring it to Jane’s attention that sometimes coincidences are not coincidences.” He took Jane’s hand and smiled down at her. “And let her know I’m keeping my eye on you.”

Excerpted from the book THE PERSUASION by Iris Johansen. Copyright © 2020 by IJ Development. Reprinted with permission of Grand Central Publishing. All rights reserved. 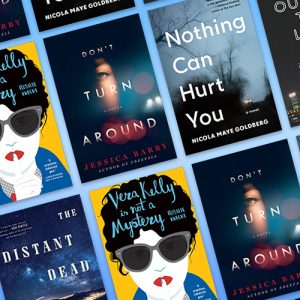 10 Novels You Should Read In June Summer is on us, and with it comes one of the best and busiest moments of the year for crime, mystery, and thriller readers....
© LitHub
Back to top