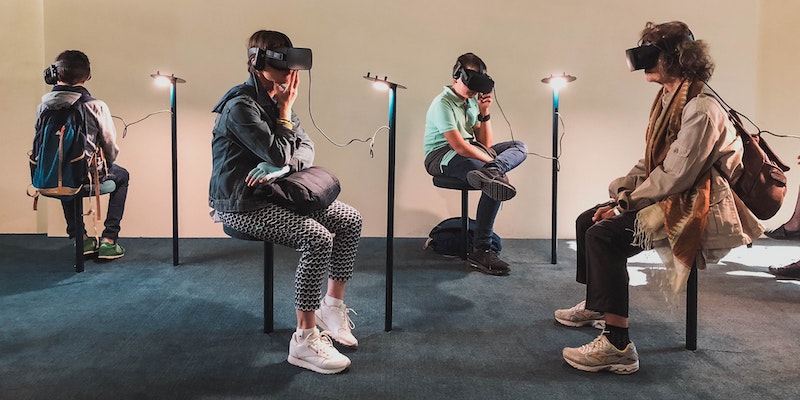 Autonomous vehicles and augmented reality are ripe for illegal exploitation.

Near-future science fiction is one of the most challenging sub-genres to write, but it offers us a peek at the technologies that could be just around the corner. Where space operas can invent anything in their worlds, readers of near-future fiction expect a futuristic world different from their own, but not so much as to be unrecognizable.

Whenever a new technology arrives, change inevitably follows. “Disruption” is the favored buzzword of Silicon Valley, giving the change an exciting and positive spin. But there’s often a dark side you won’t see at the slick product launches. Like any other tool, technology can be used for good—or with criminal intent for much more nefarious purposes. This field of possibilities is the fertile ground where writers can merge the dreams of science fiction with the nightmares of crime novels.

In the classic science fiction of the 1960s, Isaac Asimov wrote about sentient robots, and Arthur C. Clarke about alien contact and human regeneration. Both of those things remain the stuff of dreams. In the 1990 Hugo Award-nominated book Earth, David Brin sets out his vision of a world 50 years into the future. While some of Earth’s elements range from the awkwardly out of place today (the now-retired Space Shuttle) to the truly fantastical (artificial black holes), it also offered some aspects that seem eerily prescient. Earth posited a global communication network populated by trolls and conspiracy theories, email spam, loss of individual privacy, and the climate change crisis.

It’s been 30 years since Earth and Brin’s vision of what was to come. Looking ahead from 2020 at two technologies now on the horizon, how will the criminals of the future use them

The world’s automakers and tech companies are full-speed ahead on this technology. Already, cars bristling with sensors gently roll around simulated urban areas and rocket around race tracks. Apple uses driverless vehicles to move staff between office buildings. Cities in the United States and Canada have given their approval to test autonomous vehicles on public roads. Tesla, Mercedes, Audi and others have sophisticated driving aids that already feel tantalizingly close to the dream of the autonomous vehicle.

In the future, riders will relax, reading the news or listening to podcasts while the car drives them to work. After dropping the rider off, the car will find itself a parking place or return home until summoned. On long-distance journeys, drowsy passengers can sleep soundly knowing their car remains alert as it speeds down the highway. It’s transportation utopia — until it ends up in the wrong hands.

To make this dream a reality, vehicle software will be programmed to make moral decisions. For example, a truck pulls out suddenly in front of the vehicle, and the impact would be fatal to the driver. Pedestrians block the only path to avoid the impact. The autonomous vehicle will choose who lives and who dies. The idea of a killer car has been around since Stephen King’s Christine, but what if instead of demonic possession, an autonomous car’s decision making is taken over by a hacker?

The paradox of the autonomous vehicle future is that cars won’t be making decisions in isolation. To work most efficiently, the system requires a blanket of sensors to be placed on, in, and around our roadways. Traffic lights will communicate wirelessly with vehicles approaching an intersection from all directions. The light will instruct some cars to stop and others to proceed. The vehicle will follow its programming instructions, starting with “don’t hit anything.” They’ll also wirelessly broadcast their “intentions” to other cars and traffic signals.

Article continues after advertisement
Nothing within the system will be a surprise—unless a hacker changes the rules.

Nothing within the system will be a surprise—unless a hacker changes the rules. They could use it for extortion. You’re riding along in peaceful bliss when a message pops up on the screen. “Deposit Bitcoin into this account, or you’ll crash into that bridge coming up.” They could also use the vehicle to kidnap a target for ransom. A mass of stopped or crashed cars could provide a distraction from a greater crime underway or to cover an escape. Naturally, it could also be used as a straight-up murder weapon, crashing and killing the occupant or a pedestrian.

Autonomous cars would also make ideal getaway drivers. Freed from the restrictions of traffic laws, with lightning-fast reflexes, autonomous vehicles could drive faster than any human would dare. It could instruct other cars on the road to get out of the way or to block the path of anyone chasing them. Assuming law enforcement also uses autonomous vehicle systems, an enterprising hacker could evade capture by instructing all police cars to park.

Apple and Microsoft have been investing heavily in Augmented Reality (AR) as a future revolution in technology. In its basic form, AR overlays information on a user’s field of view. In Earth, Brin described eyeglasses used to collect video and display basic information. Senior citizens became the vigilante eyes and ears of the authorities, peering at young hoodlums and recording their every transgression.

Today’s AR tech has already reached far beyond Brin’s vision. Ikea leverages AR capabilities in phones to show you what that Billy bookcase will look like in your home office. You can change the color, try different placements in the room, and move around to see it from different angles. Microsoft uses its HoloLens to show aircraft mechanics how to disassemble and reinstall sophisticated parts inside jet engines.

Tomorrow’s AR could be built into a regular pair of eyeglasses. This ultimate iteration of wearable tech could produce spectral glowing arrows for GPS directions or replace every written word you see with the language of your choosing.

[Augmented Reality] could also be the ultimate tool for a con man.

It could also be the ultimate tool for a con man. How many times have you run into someone familiar, but you can’t quite place where you know them from? They seem to know you and, not wanting to offend them, you keep talking, hoping it will come to you. What if you’ve never actually seen this person before in your life? What if they’re a hustler, reading everything about you from text floating in the air next to your head, projected in their vision by glasses, or even contact lenses? All that real-time information to establish trust, the primary currency of any con.

Thieves could also use AR to scope out a target for a future robbery or burglary, their lenses mapping out camera locations, exits, and identifying staff at a jewellery store while they browse as a shopper. The thief doesn’t even need to do this themselves, risking being seen. They could program the glasses to do everything on their own while being worn by a patsy. As far as the wearer knows, they’ve been hired as a secret shopper.

Thinking of established trust and taking a darker turn, criminals could use the technology against the wearer. People will become dependent on the AR tech, trusting it completely the way that some drivers trust their GPS. They’ll believe what’s placed in front of them without question. And why not? Their AR device has been a faithful companion. What reason would they have to suspect it showed them an empty street, erasing that truck hurtling towards them? When they step out to be crushed, the hacker manipulating their glasses has committed the perfect crime. And they could have done it from anywhere in the world, without leaving a trace.

Will these things come to pass? Maybe. It’s impossible to tell until the technology is actually here. In the meantime, crime writers will continue taking these coming innovations and speculating on what terrible deeds might await. Readers can relax and enjoy the thrill ride … and maybe think twice about those shiny new AR glasses when they turn up at the store.

Search Results Featured snippet from the web Drew Murray is a native of Ontario, Canada. After a corporate career in technology, he has transitioned into education and writing. He's an avid fan of Comic Cons, escape rooms, and board games, which positions him as the author of Broken Genius, his debut novel. Drew lives with his family in the London area.

The setting sun was casting silver-blue lights over the crashing surf as Caleb landed the helicopter in the courtyard of MacDuff...
© LitHub
Back to top