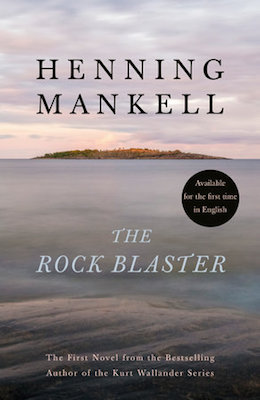 The following is an exclusive excerpt from The Rock Blaster, by Henning Mankell. In 1911, Oskar Johansson, a young rock blaster, is thought to have died in a tragic accident. But he survives, embarking on a complicated life as a disabled worker. A lifetime later, he looks back on his early years—the choices he has made, and the tragedy that made him.

A lamp on the bedside table casts a faint, pale light through its shade. Oskar is lying on his back in bed and his breathing is regular. His head is wrapped in white bandages. A thick wad of dressing is held in place over his left eye by a strip of gauze tied around his jaw and the top of his head. The blue-white blanket has been drawn up to his chin. What one can see of Oskar’s face—his mouth; the right eye, which is closed; one cheek; his nose—is pallid yellow. His arms are resting on top of the blanket. The right one ends in a bundle of gauze and compresses. There is a similar round white shape over his left hand. The bedcover is raised over the pelvis and lower abdomen because of all the bulky bandages dressing the wounds ripped open by the dynamite.

Oskar’s bed is gray-blue. The paint has peeled in some places and the steel shows through. His medical notes are hanging at the foot of the bed. The fever curve sketches the contours of an alpine landscape that gradually evens out into unbroken terrain. The curtains are closed. Everything in the room is stiff and pale.

A white-haired night nurse opens the door. She tiptoes up to the bed, leans over Oskar, listens, puts one hand on his heart. Then she turns, pads out, and shuts the door.

Oskar is not sleeping. He lies there, listening to his pain. Under the bandage over his eye, there is a twitch in the empty socket. He tries to picture the hole, but the image jumps about, jerky, unsteady. One moment all he sees is a red hole, then it changes to a slimy lump of pus fl ating about in a bowl of skin. The eye is gone, but the spasms remain, echoes of the blinking that is no longer there. The constant reminder makes him feel faintly, persistently sick. Oskar tries to focus his thoughts and mental images on other things, but every third second his eye blinks and the empty left socket responds.

A constant pain pierces his abdomen. It throbs and sears through all his shredded nerves. Oskar does not know exactly what has happened, other than that half his penis has been torn off, but the ureter and the scrotum with the testicles are intact. He does not know, has not seen. It is all wrapped up in a thick bundle, but he can feel the mess and the stickiness underneath. Each time the bandages are changed, he tries to steel himself to look, but he either cannot or does not want to. Every movement, every twisting of his body, causes unbearable pain, and he cries out. At first, he tried with all his might not to. He bit holes in his tongue, tensed every undamaged muscle in his body to strain against the scream bubbling up in his chest, but he could never stop it from bursting out. Now he does not even try to resist.

Oskar dozes off at regular intervals. There is no difference between night and day. Five times in every twenty-four hours he is given liquid sustenance; a warm hand supports the back of his neck and each sip sets fire to his torment. When he urinates, the bandages are changed. Then he sleeps, wakes up when he moves, lies and looks or shuts his eye and day is the same as night. The hours flew together and thoughts and images flit through his mind.

To Oskar, none of this is real. Everything is only strange and he is unable to grasp what has happened even when his mind is least affected by the drugs. It is beyond his comprehension.

To Oskar, none of this is real. Everything is only strange and he is unable to grasp what has happened even when his mind is least affected by the drugs. It is beyond his comprehension. He sees no images of a cliffside exploding. No images of himself in the June heat, watching from a distance as he stands by a rock wall, gripping a detonating cable with one hand and then being blown into nothingness. No images that show him lying on the ground, contorted. There is no sound of Norström bellowing or the young helper crying. An endless row of people dressed in white glides through Oskar’s mind. Dressed in white, but with bright faces, they sometimes take on Elly’s appearance. Faces that look down at him, smile at him, stroke his cheek, straighten out his blanket, change his bandages. Reality is reduced to what is immediately present. Everything else is gone. There are no memories staring at him from within his head. There is no inkling of anything from his past. His world is reduced to what is palpable, easily grasped. It is confined within these walls. Infinity is the blue or gray sky. He travels when his bed is pushed through the corridors to X-ray and the laboratories. The faces looking down at him in his bed represent both event and memory all at once.

The only thing that remains from another time is Elly’s face. She has not yet been allowed to visit him. He is not well enough. But there is her face, leaning over him and smiling her pinched smile. During the day her face sometimes appears outside the window, in relief against the gray or blue background.

And then there are the dreams. Vividly colored and chaotic. Since he wakes up so often, he nearly always recalls them. Every new waking spell begins with him looking back at the most recent dream.

There is one where he is sitting in a dark cellar sewing flags. A narrow slit of a window, just where the wall meets the roof, lets a faint light into the room. The walls are gray, bare. The fl or is of trodden clay. The air is cold and damp. He is sitting on a brown wooden table in the middle of the room, sewing hems onto flags that are two meters long. A roll of yellow-and-blue material is standing by one of the walls. The yellow cross is already woven into the coarse cloth. He sits and sews, pushing the needle up and down through the hem, with the thread winding into an even spiral. And then the flag in his lap begins to flutter. A wind starts blowing in the room and the fabric slaps against his knees. The only sounds are those of the flag beating against his legs.

In another dream, Elly and he are running along a street at night, chasing an enormous rat, which is galloping ahead of them. It is the size of an Alsatian. There are moldy spots all over its brown coat. Its gray tail whips against the paving stones like a length of steel wire. Elly and he run after the rat. Suddenly he sees that Elly is also a rat, with tiny dark brown eyes.

He wakes up and runs the images of his dreams through his mind once more. For him they are pictures, two-dimensional. Nothing more. He opens his eye, the empty socket twitches under the bandage, and he sees the portrait of the royal family on the wall opposite.

Day is dawning. The steely light of early morning. Soft sounds from the corridor outside his door make their way into the room. Footsteps, voices growing louder and then moving on.

Oskar has been in the hospital for two months and ten days. Outside, summer is coming to an end and the blasters have just started on the third and last railway tunnel.

Today will be different for Oskar. He is going to have visitors, although he does not know it. Elly is coming. Norström is coming. And through their words Oskar will begin to understand what has actually happened. His mind will turn to wondering; the images and the dreams will be different.

It is afternoon, and Norström is the first to arrive. He enters the room. He has changed out of his work clothes and is wearing a black suit that is too small for him. His collar feels tight and he is afraid and sweaty faced. He is twisting his mouth round and round and trying to wet his lips. He pulls up a chair and drops heavily onto it, sits and looks at Oskar.

“Well then, Johansson. You made it. Not bad, bloody good effort. We thought you were done for. Hard to imagine anything else. The thing went off only half a meter from you. Damn near brought down the whole rock face.”

He wipes his lips and tries to hide the mixture of disgust and unease he feels at the sight of Oskar lying there, wrapped in bandages and blankets.

“Must hurt like hell, I suppose. It seemed pretty bad when we got to you.”

Oskar looks with his one eye. He recognizes Norström, but he does not understand what he is hearing and cannot place it in any context.

“I won’t stay for long. They said you had another visitor.”

Norström tries to look cheerful. He feels uncomfortable and wants to get away even after just these few minutes. His mouth is dry and his lips move faster and faster. He tries to suck on his teeth to get the saliva going.

“We’ll do our best to come along quite often now, one of the boys or I. We weren’t allowed to before.”

Silence. Oskar tries to smile, but the bandages are tugging. “Well. I’d better be going, then.”

Norström gets up, wonders if he should move the chair back, but he leaves it where it is.

“Fine. Bye then. You get better now.”

Norström walks toward the door, turns around, and looks once more at Oskar. Then he goes out and gently closes the door.

Something is troubling Oskar. An obscure memory is starting to nag at his consciousness. But as yet he does not know what it is.

She is sitting on the edge of the bed, staring at you. Was it really that awful?

It must hurt so much.

Isn’t there anything left f the eye?

She sits on the edge of the bed. I recognize that dress. I don’t remember.

I’ve gotten used to it. Apparently there’s nothing left

Noir in the Land of Enchantment 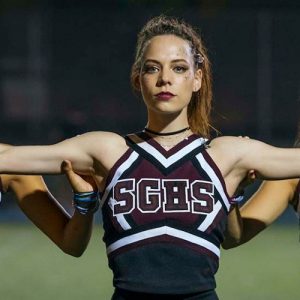 Cheerleaders, True Crime, and the American Dream Cheerleaders are having a moment. On December 29th, USA Network debuted its much-anticipated Dare Me series, an adaptation...
© LitHub
Back to top