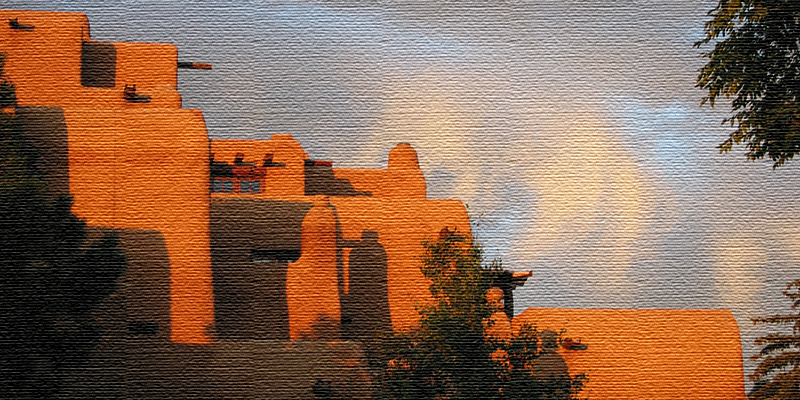 Noir in the Land of Enchantment

"Conquered and reconquered, colonized and commodified, Santa Fe understands—from historical genocide to the murders of family members—the intimacy of violence."

The following passage is excerpted from the introduction to Santa Fe Noir, edited by Ariel Gore and now available from Akashic Books.

One way of looking at the plot of the typical film noir is to see it as a struggle between different voices for control over the telling of the story.

In 1993, a Santa Fe man named Bill Faurot started to transplant a rosebush that was dying. All the other rosebushes in his backyard seemed to thrive.

He sunk his shovel deeper and struck what he thought was a rock, but dug up a human skull.

Local lore says he figured the thing was too ancient to have kin. After all, finding bodies isn’t uncommon here. New Mexico is the only state in the union that actually requires we bury our dead the proverbial six feet under, but there’s a risk any time we take shovel to ground: the other bodies could be anywhere.

We might discover someone else’s dead when we’re trying to bury our own.

One block of homes near Fort Marcy Park was built right over a nineteenth-century Spanish-Indian community graveyard. Archeologists say an unknown number of bodies are still piled, one on top of the next, under those homes.

Faurot set the skull he’d found on a shelf as a bookend.

I followed her out of my own sense of love and duty.

I’d spent time in this mountain town before—when the sunsets painted the Sangre de Cristo Range bloodred, I felt that magical Land of Enchantment vibe the tourism board slogan promised.

But as soon as I parked my trailer here for real, my neighbors warned me: Land of Entrapment, more like it. You’ll never escape.

This caution intrigued me.

Maybe it should have terrified me.

A city older than the United States, founded long before any pilgrims ever washed up at Plymouth Rock, Santa Fe has its secrets—its revolts and its hangings, its witch trials and its hauntings, its Indian school of forced assimilation and its Japanese internment camp. 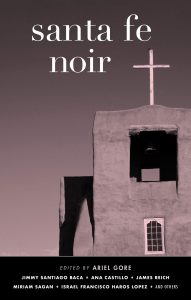 The stories in this collection reflect a fundamental truth about this city: history depends on who’s telling it. Too often the story of Santa Fe has been told only by the conquerors and the tourism PR firms. In Santa Fe Noir, you will hear the voices of the others: locals and Native people, unemployed veterans and queer transplants, the homeless and the paroled-to-here. When I asked the contributors you’ll read in these pages if they had a Santa Fe story to tell, they invariably shrugged and said something to the effect of, “Oh, I’ve got a story all right. But it might not fit the image of Santa Fe you’re looking for.”

They came back with the stories that never make the glossy tour brochures: the working class and the underground, the decolonized and the ever-haunted; the Santa Fe only we know. Like crows, the stories in this volume begin by circling the city—Eldorado, Aspen Vista, Los Alamos. And then we come in for the kill.

Conquered and reconquered, colonized and commodified, Santa Fe understands—from historical genocide to the murders of family members—the intimacy of violence.

Even the city’s breathtaking beauty is a femme fatale: droughts come like stalkers. At night, temperatures can drop fast and deadly.

For some, it’s a transient place: Your peyote trip ends here, or your last espionage assignment. You were an anchor baby born in a sanctuary city, or your car broke down near the Saint Francis exit. Your ancestral land was sold out from under you, or you followed your dying mother.

You just hope your bad luck has saved you from worse.

My own first touchstones for noir were film and life—not literature.

Christmases when I was a kid, we went to see Sunset Boulevard or What Ever Happened to Baby Jane? in some beatnik theater.

My mother used to wake me in the middle of the night to reenact the wire-hanger scene from Mommy Dearest—just for laughs.

She taught art on death row at San Quentin and was, for a half dozen years when I was a teenager and young adult, engaged to marry a man incarcerated there.

I spent many adolescent days in the death row visiting room. It was the first time in my previously hippie upbringing that my mother herself allowed me to eat candy bars from vending machines.

While she and her boyfriend whispered to each other and giggled, a Snickers bar on the table between them, I smoked cigarettes in the corner with various serial killers. Men convicted of rape and mutilation joked about the food in the cafeteria. I laughed. But I couldn’t square anything in my mind.

I still sometimes think about the way the Night Stalker’s hand grazed mine as he took a nonfilter from my pack. The way he stared at my chest, scrutinized my neck, and then, as if only as an afterthought, locked eyes with me. After I read about the children and women he’d killed, I couldn’t help but imagine what it would feel like to die, his gaze the last one you’d ever see.

I blew smoke rings to distract myself from that gaze.

I applied lipstick, and looked away.

But when the Night Stalker tapped me on the shoulder and asked me for another cigarette, I demurred.

I couldn’t afford therapy, so I turned to noir.

Because all violence—from child abuse to genocide—is confounding without the context of a noir philosophy.

The genre comes to us from the WWII-era realization that people are not, in fact, basically good, but rather easily overcome by their base impulses—or they want to be good, but they’re swamped by outside forces. They’re drawn into bad things, and they can’t figure a way out. People betrayed their own neighbors and lovers to the Nazis, after all—that’s the dystopian reality that gave rise to noir.

Not that the Nazis were the first.

People immigrated to lands they had no claim to, demonized those who already lived here, drew borders to suit their own business deals, and amassed armies of mothers’ sons to stop uprisings and coming caravans—that’s the dystopian reality that gave rise to contemporary Santa Fe.

Next he found a black garbage bag that contained a decomposing torso.

I wrote my first noir tale back in Portland—editor Kevin Sampsell dared me. When I started writing, I had no idea whodunit. But as I delved into the history of the genre, I had this harshly shadowed lightbulb moment: the narrator in noir has her own agenda.

The victim has agency in noir as well. Morality—and immorality—exist outside the law. Women and outsiders have real power. Like punk rock, noir owns the dystopian now and allows nihilism to meet camp. Like postcolonialism, noir speaks to the human consequences of external control and economic exploitation.

After he found the torso in the black garbage bag under the rosebush, Bill Faurot called the police.

It was a new body, that was for sure. Buried in the last couple of decades, anyway. Medical examiners ruled the remains were those of a female who died from a skull fracture that was probably caused by a gunshot. Her body parts bore markings similar to those made by a saw.

But there were no officially missing persons to connect the remains with.

A few years after Portland Noir was published with my story in it, I was down in Santa Cruz reminiscing about my ill-spent youth hitchhiking through redwoods. Santa Cruz Noir editor Susie Bright double-dared me. Would I write another?

Why, yes. I wanted to return to this idea of the shady narrator.

I wanted to understand the history of the West.

I wanted to explore why humans prey on those more vulnerable. It goes against all ethical doctrines, but it’s as if we can’t stop ourselves. We seem to hate being reminded of our own weakness so much that we’ll even murder that which is vulnerable within ourselves.

In Santa Fe, evidence pointed to Doug Foote, a real-estate appraiser from Oklahoma who’d lived with his mother in that house with all those rosebushes.

Where was Donna Foote now? Doug Foote’s story seemed questionable. He said she’d moved to Maryland. But DNA evidence said the body under the rosebush was hers. Doug told investigators he’d been taking a lot of hallucinogenic drugs in the 1970s. He could only remember that “something bad” had happened in Santa Fe.

The jury never saw that part of the video—where he talks about the hallucinogens.

The Night Stalker died of natural causes in 2013.

After my mother died, I left Santa Fe. But just as my neighbors had warned me, Santa Fe would soon lure me back.

All of life, maybe, is a struggle between different voices for control over the telling.

Something bad happened in Santa Fe.

ARIEL GORE is a Lambda Literary and Alternative Press award–winning editor and the author of eleven books, including The Hip Mama Survival Guide, Atlas of the Human Heart (a finalist for the Oregon Book Award), and Bluebird: Women and the New Psychology of Happiness. Her memoir The End of Eve and her novel We Were Witches both won New Mexico/Arizona Book Awards. Her spell collection, Hexing the Patriarchy, is out now from Seal Press. She has taught at the Institute of American Indian Arts and the University of New Mexico and currently teaches online at literarykitchen.com. Santa Fe Noir is her latest work. 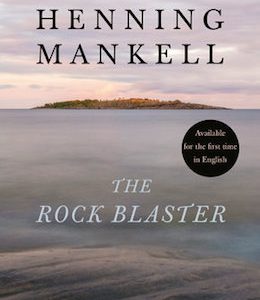 A lamp on the bedside table casts a faint, pale light through its shade. Oskar is lying on his back in bed and his breathing...
© LitHub
Back to top