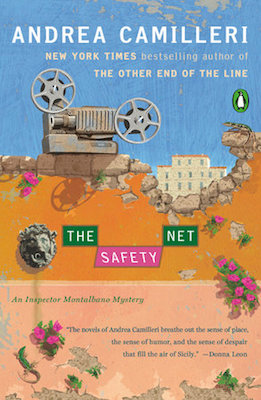 The following is an exclusive excerpt from The Safety Net, by Andrea Camilleri. When a TV film crew comes to Vigàta to film a series, Inspector Montalbano becomes entwined in several puzzles. A school is threatened by a group of armed men, which might relate to a social media incident. And an associate comes across a set of films shot by his father, from 1958 to 1963—recording the same place on the same day each year.

“The DVDs are in there. I had three made. The reels were copied in the same order in which they were shot.”

Montalbano opened the envelope, took out one of the disks, and put it in his pocket.

“That’s good to know,” said Montalbano, putting the envelope in a drawer.

Only then did Fazio sit down. He was looking at Montalbano a bit awkwardly.

“I did something on my own initiative. Sorry.” “Meaning?”

“Well, since you seemed pretty caught up in this affair . . . on my way here I ran into an old friend of my father’s, Peppi Cannizzaro, who’s a master builder. I thought he’d probably know a little more about walls than we do, and so . . .”

“So I mentioned the enigma to him, and I asked him if he could give us a hand . . . He’s in the waiting room right now, in fact.”

The inspector didn’t hesitate for a second.

Cannizzaro was tall and fat, with a likable face. He must have been a little over sixty years old, but he wore them well.

He watched the DVD in silence, and when it was over, he said:

“Could I see that again?”

After the second viewing, he gave his opinion:

“If you ask me, that’s probably not a boundary wall.”

“How can you say that?” asked Montalbano, his curiosity aroused.

“The tistette are too big for a small wall.”

“Could it be a dividing wall between one room and another?”

“No, sir, also because of the tistette.”

“So that leaves only the outer wall of a residential building.”

Cannizzaro twisted up his mouth. “You don’t agree?”

“Can you explain a little better?”

“It’s very sloppy work. You can tell from the way the plaster fell off. Nah, if you ask me, that’s the outside wall of a building, but not a house; something more like a ware- house or a garage . . . But that’s about all I can tell you.”

Montalbano had an idea.

“If we went to the place itself, would you be willing to come along?”

“Sure, anything to help.”

“How about tomorrow morning?”

“I’ve got all the time in the world. Just give me a ring.” Fazio and Montalbano took down his home phone number—Cannizzaro didn’t own a cell phone. Then they said good-bye, and the master builder left.

Left to himself, the inspector thought things over for a moment, then turned on the DVD player.

The quality of the images was actually better in the digital copies than in the original films, and this was why, as he was watching them with the master builder, he thought he’d noticed a few new details.

After half an hour of careful study, he became convinced of three things.

The first was that at the time of day in which those films were shot—that is, at half past ten in the morning—the sun was not shining on that wall.

The second was that in five of the six reels, a kind of brighter frame appeared in the right-central part of the image, rather like the effect of some indirect light. But what kind of light would be turned on at ten-thirty in the morning? On second thought, maybe it was reflected sunlight. In fact, the brighter square didn’t appear in the film shot on the windy day, when the sky was probably overcast . . .

The third and last thing was the fact that the sixth reel, the one shot as the filmer was practically dying, displayed not the slightest tremor in the hand of the person filming. The image was stable, with no jerks or sudden movements, just as in the five reels filmed before it. Could the hands of a dying man possibly be so steady? No. All six times, the camera was surely resting on a flat, solid surface.

“What’s going on? Was somebody killed?” the newsman asked hopefully.

He had an idea, and didn’t waste any time.

He rang his friend Nicolò Zito, editorial director of the Free Channel.

“Sorry to bother you, Nicolò.”

“What’s going on? Was somebody killed?” the newsman asked hopefully.

“Damn. I’m getting really sick of talking only about this fucking TV movie they’ve been inflicting on us! What do you need?”

“Do you know anyone who knows anything about those old Super 8 movie cameras?”

“Do I ever! And he’s right here. Our lighting director collects the things!”

“And he’s there in your offices?”

He put the DVD in his pocket, grabbed the box with the reels and the projector, and headed off for Montelusa.

“The news director is on the air at the moment, but he’s almost done. You can wait for him in his office,” said the Free Channel secretary as soon as the inspector came in.

Montalbano went into the office and flopped into an armchair. On the TV screen beside the desk, Zito’s big face signed off to the viewers until the next edition of the news and then disappeared, and in its place appeared the face of a young woman announcing the start of a cooking program. “Man, are you a sight for sore eyes!” Nicolò greeted him.

“Sciuto will be right with us,” said the newsman, sitting down behind the desk. “Why are you so interested in Super 8s?”

The inspector was about to reply when Sciuto poked his head inside the door. He and Montalbano had known each other for a while.

The inspector explained briefly what he wanted to know and handed him the box. Sciuto gave it a quick glance and said they needed to project the films.

“You can do it right here,” said Zito.

Sciuto diligently watched all six, with the other two looking on. A bewildered Zito then began to ask:

But Montalbano interrupted him.

“Please don’t ask any questions or we’ll be here till morning. I’ll ask the questions, okay?”

“What do you want to know?” asked Sciuto. “In the meantime I can tell you that they were filmed with a Bolex Paillard dating from before 1956.”

“And in fact,” said Montalbano, “the first reel was made in 1958. What I want to know now is whether those cam- eras had a zoom at the time.”

“Not yet,” said Sciuto. “Distance was controlled directly through the lens and couldn’t be altered during the filming.” “In your opinion, how far away was the person filming from the wall being filmed?”

“I’d say about five meters at the most.”

“Were they using a tripod?”

“No. The cameras were handheld, using a special strap right on the device.”

“So they couldn’t be set down on a flat surface?”

“Some models could, yes. This one certainly was.”

“One final question,” said Montalbano. “Did you notice that in five of the reels, there’s a little square that appears, brighter than the rest of the frame, off to the right?”

“How do you explain that? Could it be a defect in the camera itself?”

“Can I assume the movie camera in all six reels is resting on a windowsill?”

“That seems the most likely explanation,” said Sciuto.

“Thank you,” said Montalbano. “For me that’s enough,” he added, standing up and grabbing the parcel.

“Oh, no, you don’t,” said Zito. “You can’t just leave me here without the slightest explanation of any of this.”

“I swear I’ll explain it all in fine detail in due time,” said Montalbano, cutting the conversation short and leaving the room, thinking all the while that it was quite possible there would never be any explanation at all.

He went back to the station, put the box in a small cabinet, and then sat down, took the letter Sabatello had sent him, and dialed his cell phone number.

“Montalbano here, Signor Sabatello. Sorry to bother you, but—”

“Have you already found something out?” Sabatello asked excitedly.

“I’m happy to oblige. Unfortunately, I’m in Palermo at the moment and have to be here for another two days. I’ll give you a ring as soon as I get back to Vigàta, all right?”

The first thing he did as soon as he got home was go and look inside the refrigerator. Adelina had prepared a platter of finger-lickin’ swordfish involtini, and there was also a small frying pan containing a vegetable dish he loved: boiled tinnirume of baby zucchini and their leaves.

He put the involtini in the oven to warm, set the pan of tinnirume over a lighted burner, and then went out to the veranda to set the table, because the evening deserved it.

From The Safety Net by Andrea Camilleri, published by Penguin Books, an imprint of Penguin Publishing Group, a division of Penguin Random House, LLC. Copyright © 2017 by Sellerio Editore. Translation copyright © 2020 by Stephen Sartarelli. 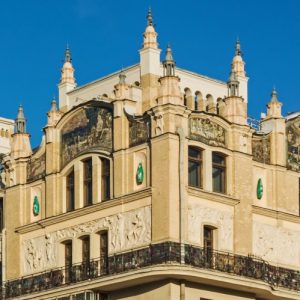 Architecture in Fiction—It's More Than Just a Setting "In a hole in the ground there lived a hobbit. Not a nasty, dirty, wet hole, filled with the ends of worms and an oozy smell,...
© LitHub
Back to top