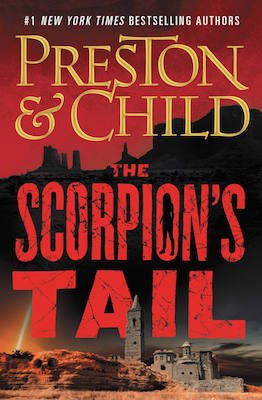 The following is an exclusive excerpt from The Scorpion’s Tail, by Douglas Preston and Lincoln Child. Archaeologist Nora Kelly and FBI Agent Corrie Swanson team up again to solve another shocking case when a fifty-year-old mummified body is found in the basement of a building in a New Mexico ghost town.

Nora slapped the dust off her jeans with a sinking feeling as she watched Corrie Swanson approach. She wondered what the agent wanted now. She sure as hell hoped Swanson wasn’t going to throw her current dig into the extended chaos she had with the previous one. Reluctantly, Nora climbed down from the cave entrance to meet Corrie beneath the tent shade set up on the valley floor.

Corrie approached with her hand extended.

“Hi, Nora,” said Corrie, shaking her hand. “I hope I’m not interrupting anything.”

“This isn’t about the Donner Party site, if that’s what worries you.”

Nora took immediate, and instinctual, offense. Do I look worried? But she pushed the feeling away, telling herself she was being prickly.

“We were about to have lunch,” she said instead. “Come into the shade and have some coffee.”

Nora led the way. She poured Corrie a cup from a large thermos and another for herself.

“Have a seat,” she said. “Cream and sugar are over there.”

Corrie eased herself into a chair, looking uncertain. Adelsky took a seat nearby and pretended to drink his coffee, while obviously waiting with his ears perked up to hear what the FBI agent might have to say. Nora thought with a certain amusement that Corrie still looked very much the rookie—she hadn’t yet developed the air of authority and self-assurance law enforcement types usually displayed. And she looked so young. It couldn’t be easy for her in an FBI office with a bunch of older guys. Nora certainly empathized with that.

So why did she feel such an urgency to speed Corrie on her way? “How’s your arm?” she asked, making an effort to be polite.

“All healed up, thanks for asking.”

They sat in director’s chairs around a plastic worktable. Nora’s sandwich was in the cooler nearby, but she figured it would be rude to start eating in front of Corrie. Adelsky felt no such compunction, and he hauled out an overstuffed bologna sandwich and began to chow down.

Nora took a deep breath. “What brings you all the way out here, if not the Donner case?”

“I didn’t mean to drop in on you like this. I would have called, but, well, you’ve got no cell reception—and  I’m in kind of a hurry.”

“I’ll get to the point,” said Corrie. “A body was found in a ghost town in the Azul Mountains. I need someone to excavate it properly.”

All of a sudden, Nora realized why Corrie’s appearance made her antsy. It was because, unconsciously, she’d been afraid of a request exactly like this.

“Doesn’t the FBI have a team that does that sort of thing?” she asked.

“We do. It’s called the Evidence Response Team.”

“The thing is,” Corrie said, “we don’t know yet if the individual represents a homicide or just an accident. In other words, it isn’t an official case yet. It’s a small job, something that could be done in a couple of hours. It doesn’t require a big forensic team and a lot of fuss.”

In other words, my time is less valuable than theirs. Nora pondered this for about one additional second. “I’m sorry, but I’m totally tied up here. Our permit expires October 15, around the time the snows start at this altitude. I have to have everything finished before then.”

“I understand,” Corrie said. “But it’s only a couple of hours’ work, and I just want to make sure it’s done right and the evidence isn’t compromised.”

“I doubt the Institute would release me, even for a day.”

“On the contrary, I’m pretty sure they would. Local institutions often lend their expertise to law enforcement. It’s considered a courtesy.”

“A courtesy.” Nora felt slightly annoyed at the way she’d framed this, implying that a refusal would be a discourtesy. Rookie or not, Special Agent Swanson was proving once again that she could be a pain in the ass.

“And,” Corrie added, “it would be good publicity for the Institute, which… could probably use it right about now.”

And whose fault is that? Nora almost replied, swallowing her words. This damned FBI agent was like a dog with a bone. A lot was riding on the smooth completion of this project—for Nora personally. She took another deep breath. “Sorry. You make a good case, Corrie, you really do. But I’m telling you the truth. We’re incredibly busy, on a short clock, and—” she fibbed— “behind schedule as it is.” She gave Corrie a long, friendly smile of refusal. Maybe if she split her sandwich with the woman, she’d leave.

“Have you ever been to the ghost town of High Lonesome?” Corrie asked after a moment.

“Never heard of it.”

“It’s on a mesa, overlooking the Jornada del Muerto desert. Used to be an old gold-mining town. The buildings are fabulously preserved. There’s a hotel, saloon, church, livery stables. And those mountains are where Geronimo and Cochise used to hang out. All in all, a pretty spectacular spot.”

Nora shook her head. She was not going to take the bait. “The body I mentioned was found by a relic hunter in the basement of a rather mysterious building, off by itself next to the edge of the mesa. It looks as if he took refuge there—or his body was dumped—maybe sixty, seventy years ago.”

“No sign of foul play?” Nora asked, despite herself.

“Hard to say. The relic hunter only had a chance to uncover the cranium and part of the right forearm before being arrested. The body is mummified and covered in windblown sand. I’m no archaeologist, but it looks like he was crouching against the wall.”

“Mummified?” She found herself intrigued—but only a little. Corrie was selling this pretty hard… but the fact was, she couldn’t even consider it. And it would be better if she didn’t hear anything more.

She shook her head with what she hoped was finality. “Your salesmanship is first-rate, Corrie, but your timing is awful. My back’s against the wall here.”

Corrie looked at the ground for a moment, almost hesitantly, then looked up—first at Adelsky, then at Nora. “So is mine. Look, I really need this. I’m in a bit of a shit storm back at work.” Another hesitation. “Actually, I’m drowning in one, to be honest. You heard about the shooting in the Sandias?”

“I was one of the agents involved. I kind of fucked things up. So they dumped this case on me. I think it’s sort of a penance. Or more likely, the first stop on a lateral arabesque to some desk job, investigating white-collar crime.”

Nora frowned. “What do you mean, fucked things up? From what I heard, what happened in the Sandias was a success. They—you—rescued that little girl with barely a scratch.”

Corrie winced, then waved a hand as if to shoo away something painful. “I can’t go into the details.” She glanced again at Adelsky. “But I hope what I’ve said will make it clear just how important this is to me.”

There was nothing else Nora could say, so she remained silent. After a moment, Corrie spoke again. “I just thought, you know, given what happened in the Sierras, when I, um…” She stopped. “Well, I hate to bring this up, but—not to put too fine a point on it, I did save your life.”

For a moment, Nora was speechless at this brazen combination of honesty and lack of tact. Then, suddenly, her irritation vanished and there was nothing left for her to do but laugh. “You’re relentless!” she said, shaking her head. “Wow, I guess you really must be in deep shit. Okay. Thank you, again, for saving my life up there in the Sierras. And by the way, you’re welcome for my preventing your death from hypothermia.”

Now it was Corrie’s turn to say nothing.

Nora spread her hands, palms up. It was hard to turn down an appeal like that. And maybe, she thought, giving a little pro bono assistance to the FBI would help shine up the Institute’s reputation and give her promotion an additional push. “Since you put it that way, how can I refuse? What the hell—I’ll do it. When? With some fancy footwork I can probably squeeze in a day off sometime next week.”

“The thing is,” Corrie said, “we’re worried about word getting out and other relic hunters coming around. Apparently they’re endemic around here—but I don’t need to tell you that.”

This was true; Nora had seen more than her share of looted or desecrated prehistoric sites. “So you’re saying you need this taken care of soon?”

Corrie flushed. “The sooner the better.” “Yes, but I just finished explaining that—”

“What’s the point of your agreeing, if by the time we get there everything’s been looted? Speaking of that—” and she turned to Adelsky— “everything you’ve just heard is privileged information, and if you repeat it, you risk, well, a felony.”

“Repeat what?” Turning away, Adelsky busied himself finishing up his sandwich.

Corrie turned back to Nora. And, for the first time since she’d arrived at the mesa, she smiled. “Why not just get it over with? I’ll pick you up at—say—seven thirty in the morning? It’s a bit of a drive.”

There was, Nora had to admit, real value in just getting it over with. 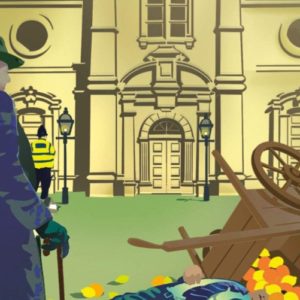 10 New Books Coming Out This Week Another week, another batch of books for your TBR pile. Happy reading, folks. * Kwei Quartey, Sleep Well, My Lady (Soho) “Brilliantly...
© LitHub
Back to top