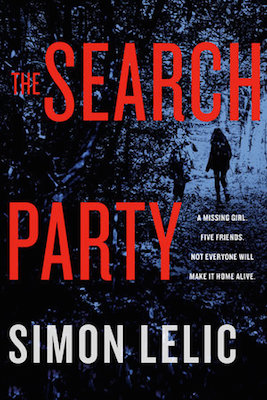 The following is an exclusive excerpt from The Search Party, by Simon Lelic. Sixteen-year-old Sadie Saunders has been missing for a week. The whole town thinks she's been murdered, and they think they know who did it. But Sadie's five closest friends are determined to find out the truth. But they all have a secret. And they're all suspects.

So much for the rainbow bridge.

Fleet had to follow the river inland to get to where he was heading—passing the current search site on the way—and though something inside him lifted when he reached the final dilapidated houses of the town itself, the clouds did not. The sky was gray to the end of the world, and on the roof of Fleet’s car the rain persisted with its relentless beat.

As the last few buildings disappeared from his rearview mirror, Fleet found himself in countryside. The forest thickened, obscuring the river. And although Fleet remembered the area far better than he would have liked, he twice took a wrong turning. He blamed the satnav, which was insistent that he should cut across a field. He switched it off, turned up the radio—the local station, playing modern pop tunes, teenage stuff, until he dialed to something classical instead—and relied on memory, together with the directions Nicky had given him at the end of their patchy phone call.

It took him half an hour longer than he’d expected, and in the end even the radio signal gave out. Had they really come this far? This deep inland?

The Insignia wasn’t built for country lanes, even less for muddy fields, so he had to park it short of the pair of police Land Rovers. Nicky was waiting for him, wellied and dripping. Somehow, though, DS Nicola Collins always managed to look like she was fresh from a good night’s sleep and her second cup of coffee. It was those frost blue eyes of hers, clear and crisp against the frame of her short black hair. Also, she was young. Twenty-six? Twenty-seven? A decade younger than Fleet, and Fleet’s true age, he always felt, was his own plus the number of cigarettes he’d smoked that day.

But what Fleet had mistaken for excitement in Nicky’s voice when he’d spoken to her on the phone was something else, he quickly realized. It was adrenaline, yes, but Fleet could see she was rattled. And DS Collins didn’t rattle easily.

“Boss,” she said, in greeting. She looked down at his shoes, which were already sinking into the mud.

Fleet flipped the hood of his anorak over his head. “You can always give me a piggyback if I get stuck,” he said. Fleet was six-three, and at least fifteen kilos overweight. Nicky was trimmer than a greyhound, and weighed about as much. Even so, Fleet had no doubt she could have managed it. She was tenacious as hell, which was part of the reason he’d given this particular assignment to her. Others would have seen it as being sidelined, but Nicky seemed to appreciate how crucial it was likely to be.

“If it carries on raining like this, we’ll both be swimming soon anyway,” Nicky said.

Which might actually have suited Fleet better. When he’d been a teenager he’d swum competitively, and even though it was years since he’d been in a pool, these days he’d probably still show more grace in the water than he did on dry land. Wasn’t body fat supposed to help with buoyancy, after all?

They started across the field toward the woods.

“How far have we got to go?” Fleet asked.

“Far enough,” Nicky answered. “Especially in brogues. But they were closer to the edge of the forest than they apparently realized.”

“To be honest, I’m not sure. When they called, they struggled to pinpoint their location. On the other hand, I’ve got a feeling they knew where they were heading. But their stories are . . . garbled. Which is understandable, given the circumstances.”

Fleet turned, but could see only the tip of Nicky’s nose past the solid yellow wall of her hood.

“You said they called in,” he said, prompting her.

“That’s right. About two hours ago. It took us an hour to find them. Would have been longer if we hadn’t already been on their trail. The ambulance is apparently on its way, but I guess it got stuck behind a tractor or something. And . . . Well. There’s no rush.” She looked at him meaningfully.

“Sadie?” Fleet asked. It was all he could say, all he needed to.

They passed through the tree line. Even at the edge of the forest the foliage was dense, but there was something like a path cutting through the undergrowth.

About a mile in, they reached a clearing, and Nicky moved to one side. Unlike most of the cops assigned to the investigation, she’d worked with Fleet before, and she knew him well enough to appreciate that the time for commentary had passed. It was important to Fleet that he be able to make his own assessment. When he wanted more from Nicky—or from anyone—he would ask.

The first thing Fleet noted was how well Nicky had preserved the scene. Unexpectedly this far from the road, there was a clutch of buildings on the other side of the clearing—all long abandoned, by the look of them. There was a small cabin, as well as two large barns, presumably for crops or farming equipment, not that anything was being cultivated out here now. All the structures had been taped off, as indeed had the entire area. Patches of the open ground between Fleet and the buildings had also been marked, and covered with tarps to protect them from the rain. Footprints? Fleet wondered. Or blood?

He skirted the edge of the clearing, as the rain on his hood struck a steady patter—only interrupted every so often by a heavier drop from the branches overhead. Fleet pulled the hood back to release himself from the distraction.

Half a dozen steps from the access path he saw them. While they’d waited for the ambulance to arrive, Nicky and her three colleagues had herded them under cover, beneath the roof of one of the barns. The four kids were seated on the ground, wrapped in silver blankets, and Fleet noted they were even more poorly prepared for the weather than he was. They had on trainers, T-shirts, shorts, and all were soaked to the skin. They looked like Glastonbury-goers on a comedown, long after the music had stopped.

Fleet’s attention moved on, his eyes sweeping the shadows in the outbuilding.

And then he saw it. The body at the base of the tree. It was beyond the view of the kids in the barn, but from the way the teenagers were facing, it was obvious they were aware it was there.

“Jesus Christ,” Fleet muttered. He looked at the kids again, and then the body.

You heavens above, rain down my righteousness.

For the first time since he’d been a teenager himself, Fleet felt the urge to cross himself.

Excerpted from The Search Party by Simon Lelic, published by Berkley, an imprint of Penguin Publishing Group, a division of Penguin Random House, LLC. Copyright © 2020 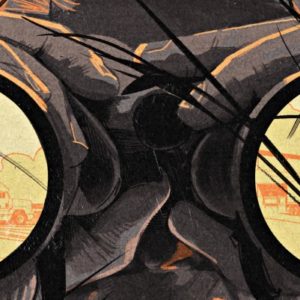 Jack Reacher and The Grand Unified Theory of Thrillers Please indulge me while I digress on the subject of my grand unified theory of detective/mystery/thriller fiction....
© LitHub
Back to top