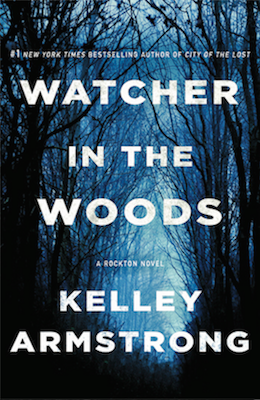 The following is an exclusive excerpt from The Watcher in the Woods, by Kelley Armstrong. Rockton is a secret enclave—home to many folks trying to flee society, which means it attracts both refugees and criminals. Casey Duncan, the town’s new transplant and only detective, has had a large number of cases so far—but when a US Marshall is shot dead after trying to remove one of the residents, Casey realizes she must solve the murder without letting the outside world intrude further.

One of the endless dilemmas we face as law enforcement in Rockton is also one I faced as a homicide detective down south. Only here, it’s multiplied a thousand times. How much information on potential threats do we release to the public? From a layman’s point of view, the answer is a no-brainer: tell them everything. Yet as cops, we know how wrong this can go. Tell people there may be a thief targeting their neighborhood, and you damned well better hope no teen tries sneaking through a window after breaking curfew.

Up here, it is so much worse. For the average resident, Rockton is an extended summer camp. To some it’s a grand adventure, the chance to experience another kind of life and go home enriched by the experience. To others, it’s like being sentenced to camp by working parents, forced to endure a cell-phone-free and Starbucks-free hell before being released back to civilization. Either way, as the “camper” you are a guest. You don’t need to worry about paying bills or put- ting food on the table. Sure, you have chores. And rules. Plenty of rules. But you trust the grown-ups to lock the doors and arm the security system and replace the batteries in the smoke detectors.

We have had death in Rockton. Murder and kidnapping and assault, and yet no one looks around and says, “Holy shit, is this the murder capital of North America? Let me outta here!” They understand the issues with this life, the volatile elements we are dealing with. They see that we catch and deal with those responsible, as quickly as we can.

This does not mean, however, that it’s impossible for us to break their trust. I can use the analogy of children, but these are adults, and the more complicated the situation, the more armchair law enforcement we see, residents taking a critical look at our methods and saying, “That’s not how I’d do it.”

We have made mistakes. It’s unavoidable. It’s like installing a security system on your home. You think you’ve covered every possibility, and then someone breaks in through the chimney, and you kick yourself for leaving a point of entry unguarded. Sure, you weren’t expecting cat-burglar Santa. Yet others will judge the omission, and you feel the full weight of that.

So do we raise the alarm? Yes, we must.

It’s how we raise it that’s in question.

“When we get back to town, I’m waking Will,” Dalton says. “Fucking shitty thing to do, after leaving him in charge, alone, for two days.”

“Yeah. I’ll also recall the patrols for the night so they don’t bump into this guy. First light, though, we’re tracking his ass down. I want you to stay in town. Pick two militia to stay with you. You’re gonna need to make a statement.”

I don’t argue. I’m the one who insists we make public statements. Before that, it really was a parental situation, where the grown-ups handle everything and explain nothing. That isn’t my way, and Dalton has come to see the value in these public statements, if only because they keep residents from pestering us to update them each personally. Dalton and I part ways at the edge of town. I’m heading home.

He’s keeping Storm—she knows what our mystery man smells like, and if he comes near, she’ll warn Dalton.

Our back door is unlocked, as usual. I make a mental note to add this to my morning statement—tell people to lock their doors. Most don’t. For them, there’s nostalgia in that, hearkening back to a time before most of us were born, when you could pop out for a few hours and leave your door open. For Dalton, an open door is also a statement. If someone wants to break in and steal his belongings, they can go right ahead—he’ll have fun tracking down their asses. Needless to say, Dalton has never had a break-in.

As I walk in, I’m thinking about that, and so when I hear a creak, I freeze, hand dropping to my gun. Any other time, I wouldn’t have even noticed. It’s a wooden house. It creaks. But I’ve just been reflecting on our unlocked door, so a creak puts me on full alert.

I scan the moonlit kitchen. Our dinner dishes are still out. Even the chocolate chip package is there, morsels spilled onto the table where I grabbed a handful as we left.

I shrug off my light jacket, so I can better access my gun. Then I take a step and . . .

Another creak sounds, this one from the bottom of the stairs. I ease forward, but even if I could see through the doorway, I wouldn’t have a direct sight line to the stairwell. So I withdraw, close the back door quietly, and turn the lock. My intention is to lock the intruder inside, but I’m aware that I’m potentially trapping myself, too.

I pull my gun from its holster. Then I take one careful—

Footsteps sound on the front deck. Damn it. Dalton has circled back.

When a rap sounds, I go still. Dalton would not knock on our door.

“I saw you head in the back way, and I saw Eric take off across town. I know something’s up. Also? I know who you’ve got in town, and I’m offering my help.”

There is one resident who could catch a glimpse of April and not be fooled into thinking it’s me. Diana. The person I came to Rockton with. The person who knows my sister.

Go away, Diana. I appreciate the offer. I really do. But can we talk about this in the morning—

The front doorknob rattles. The door starts to open, and I’m lunging forward as I hear her step inside, the door shutting behind her.

“I know April’s here, Case,” she says. “And if you guys are up at three a.m., you’re dealing with a problem, and you’ll need help taking care of Kenny.”

I wheel around the corner.

“There you are.” Her gaze drops to my gun. “What the—?”  A figure steps out behind her. My heart thuds.

Diana lets out a squeak . . . as a pistol barrel presses against her neck.


Kelley ArmstrongMinotaurThe Watcher in the Woods 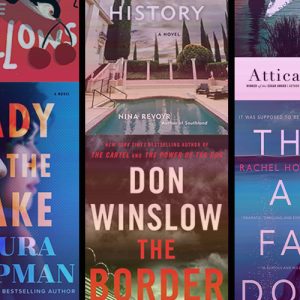 The Best Crime Novels of 2019 Another year in the books and the world of crime fiction is a little wiser, a little more mature, its tastes and approaches...
© LitHub
Back to top