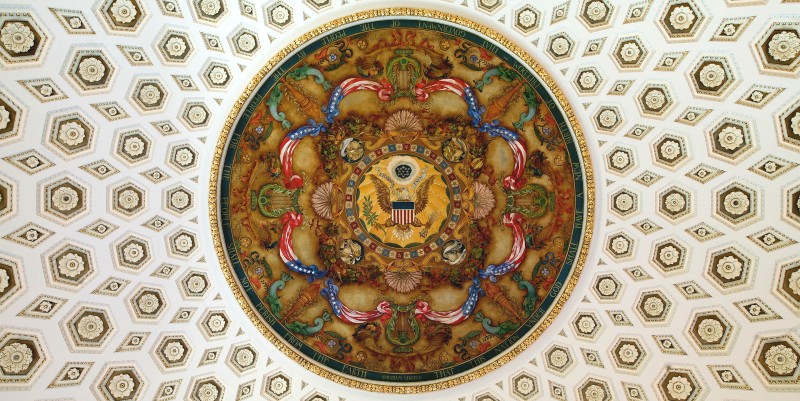 The U.S. Capitol tour guide looked nervous and I knew why. I was asking too many questions. In the post-9/11 era this was the kind of thing that could get you in trouble, especially in Washington, D.C. Finally, in Statuary Hall she confronted me and asked what was up.

Many years ago I served as the economic advisor to a U.S. Senator at a time when almost everywhere on the Hill, including a labyrinthine maze of tunnels, was accessible to staff and even to visitors. I was taking the tour to learn where a visitor couldn’t go any more.

I explained that I was an author doing book research and that she could check out my website to prove I was who I said I was. But because I’d been querying her about staircases and elevators among other things, I was sure she was thinking: possible terrorist. It had happened to me before at the Jefferson Memorial.

Instead she looked relieved. “Never mind,” she said. “I thought you were looking for the Lost Symbol. We get so many of those people on this tour.”

The “Lost Symbol,” for anyone who hasn’t read Dan Brown’s bestselling blockbuster by the same name, was an object encoded with symbols that Brown’s character, Harvard symbologist Robert Langdon, discovered in the Rotunda of the Capitol. Deciphering its meaning would lead to a lost world of enlightenment and potentially dangerous wisdom, unlocking the secrets of the Freemasons.

Except the Lost Symbol doesn’t exist. Nor does the Book of Secrets that Nicholas Cage searched for in the movie National Treasure 2. The top-secret book, which was supposedly kept in the Library of Congress, contained a compilation of notes written for and by the presidents of the United States on such matters as the Kennedy assassination, Watergate, and Area 51.

Even though these items were completely made up, visitors still come to the Capitol searching for the Lost Symbol, as my guide told me, or ask docents at the Library of Congress where the Book of Secrets is hidden. In fact, the Library had so many people clamoring to see the nonexistent book after the movie came out in 2007 that they finally borrowed the prop from Hollywood and showed it off in a special exhibit. Though the Book of Secrets was the star attraction, the Library took advantage of the surge in interest to make people aware of what really could be found at the Library, as well as explaining the research assistance it had provided to make the book look authentic.

“Disney’s producers went to people in our conservation division for help,” said Giulia Adelfio, Chief of the Visitor Engagement Office at the Library. “They wanted to know what type of binding an 18th century book would have, the kind of paper that would be used, and how the ink would change over the years since each president’s notes were supposed to be handwritten.”

Though the movie came out a dozen years ago, Adelfio said she still gives tours to adults who saw the movie as kids and are just as awed when they see the actual locations in the Library where the movie was shot. “National Treasure and The Lost Symbol definitely put the Library of Congress on the map for people who otherwise wouldn’t have visited,” she said. “It has allowed us to expand our own story.”

So what is it about tales of lost treasure, forgotten secrets, and faded maps with clues to X-marks-the-spot that intrigue us as readers—and why do so many crime fiction writers write about them? Adelfio said it’s because the books are page-turners and what she calls an “intellectual Rubik’s Cube.”

Katherine Neville, whose international bestselling novel The Eight came out in 1988 and has been published in eighty countries and forty languages, said that books like hers and other swashbuckling quest/adventure books with a mystery or a crime tied to the plot fascinate readers because they feel as if they are part of what’s happening. Neville’s debut novel, which has landed on several “must-read-in-your-lifetime” lists including NPR and Amazon, is the tale of the legendary Montglane chess set owned by Charlemagne and now scattered to the four winds. Alternating between the French Revolution and the 1970s OPEC oil crisis, The Eight is the story of a desperate search by a female computer whiz to reassemble the chess set, which grants the owner unlimited powers, before it falls into the wrong hands.

While Neville used real events as the backdrop for a completely made-up story, Steve Berry, whose internationally best-selling Cotton Malone thrillers usually land at the top of the New York Times bestseller list, bases his books on “90% history, with that remaining 10%—my additions—there to add that extra oomph to something that is all too real.”

Berry said he loves “action, history, secrets, and conspiracies. That’s why I write about them.” As to why his readers enjoy his books he added, “They’re fun. They’re an escape. They’re interesting. And the closer you can keep the story to reality, the better.”

Like Berry’s books, my latest mystery, The Angels’ Share, is based on a true story—or supposedly true story—of documents that were secretly brought to the Jamestown Settlement in Virginia in the 1600s and were hidden under the church bell tower. The cache contained a novel written by Sir Francis Bacon, a noted Freemason, laying out the tenets establishing the brand new United States, which were later codified in the Declaration of Independence and the Constitution. Also among the documents were papers in Bacon’s handwriting proving that he was one of the authors of Shakespeare’s plays. There are other stories—it does get weirder—claiming the Ark of the Covenant was among the items as well as notes from a book about the Emerald Tablet, or the Tablet of Destiny, containing the formula for alchemy.

Later these items were moved to nearby Williamsburg when it became the colonial capital of Virginia. There they were reburied in a vault underneath Bruton Parish Church, which, to this day, is still a functioning church. Over the years there have been so many stories of what happened to the contents of Bruton Vault—or whether the vault even existed—that finally, in exasperation, members of the Colonial Williamsburg Foundation and Bruton Parish Church dug up the graveyard twice, in 1938 and 1992, to look for it. Although they found nothing and claimed this put the matter to rest once and for all, detractors said either they dug in the wrong place or that John D. Rockefeller, who had financed the restoration of Colonial Williamsburg in the 1920s, had removed the vault’s contents himself because of the potentially explosive consequences if they came to light.

The plot for The Angels’ Share fell into my lap a few years ago when someone at a book signing asked if I’d ever written about the Freemasons. When I said I hadn’t, he handed me his card and said, “You should. Call me if you need help.”

Since my mystery series is set in Virginia near where I live (The Angels’ Share is the 10th book), it didn’t take long for me to do enough Google searches to discover the curious story of Bruton Vault and its relationship to the Freemasons. Even though two sons and a daughter-in-law attended the College of William & Mary in Williamsburg, I’d never heard of it. (One of my sons later told me they talk about it if you take the Ghost Tour.)

Once I was hooked I was soon deep down the rabbit hole checking website after website and reading anything I could find about the mysterious vault. Because here’s the thing: now I wanted to know if it was real or not. Though I changed some of the “facts” for my own narrative purposes, I kept circling back to whether or not the vault was just an elaborate fabrication, enhancing conspiracy theories that the Freemasons masterminded the founding of the United States. And that Shakespeare was a beard for others who couldn’t voice their political opinions in Elizabethan England without getting into trouble. Even after visits to Bruton Parish Church, the Jamestown Settlement, and the Folger Shakespeare Library in Washington, D.C. where I spent hours speaking with senior historians, I still wasn’t sure what I thought.

Now that my book is out, I’ve heard from readers who said the story prompted them to do additional research to find out what was true and what I’d invented. I’m curious if it might also send folks to Jamestown or Bruton Parish or the Folger Library as well—all great places to visit, by the way. While no one I interviewed told me flat out that Bruton Vault and its mysterious contents didn’t exist and folks at the Folger Library believe that Shakespeare wrote Shakespeare, it still leaves the door open, doesn’t it?

And that is what’s so tantalizing: you just don’t know.

Robin Burcell, who co-writes the bestselling Sam and Remi Fargo series about a treasure hunting husband and wife team with Clive Cussler said,  “It doesn’t really matter what our intrepid heroes are searching for. It’s not really about the treasure at all. It’s the journey of finding it, the action and adventure. Finding the cache of gold at the end simply adds to the excitement.” 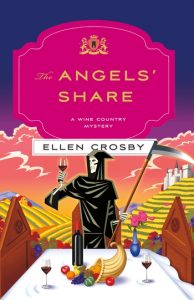 Ellen Crosby is a former reporter for The Washington Post, foreign correspondent for ABC News Radio and economist at the U.S. Senate. She has spent many years overseas in Europe, but now lives in Virginia with her husband. She is the author of the Wine Country mysteries and the Sophie Medina mysteries. The latest in her Wine Country mystery series, Bitter Roots, is out April 5, 2022 from Severn House. 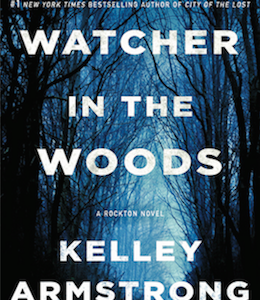 One of the endless dilemmas we face as law enforcement in Rockton is also one I faced as a homicide detective down south....
© LitHub
Back to top