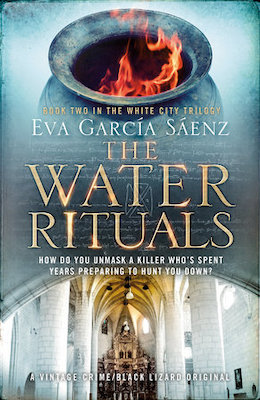 The following is an exclusive excerpt from The Water Rituals, by Eva Garcia Saenz and translated by Nick Caistor. Detective Unai “Kraken” Lopez de Ayala is dismayed when he discovers that the pregnant victim in a horrific, ritualistic murder is his own former love. Realizing that the killer is hunting him, too, he knows he must solve the crime before anyone else he loves is jeopardized, especially Deputy Superintendent Díaz de Salvatierra, who is pregnant. Probably with his baby.

A girl with dark brown hair jumped off the train at the same time as the four young men from the San Viator cuadrilla.

The five teenagers spread out across the bare station at Cabezón de la Sal, a town in Cantabria famous for its salt flats. Their backpacks were full of supplies, and their hearts were full of expectations for the summer.

Waiting for them was the project director, Saúl Tovar, a young professor dressed informally in a checkered shirt. He welcomed them and introduced several student assistants who had already attended summer camp there.

There weren’t many: a few second- and third-year girls studying history who swarmed around Saúl, and an older student who was chatting with the tall girl who had driven them from Santander in a used Ford Fiesta. Marian Martínez knew the only reason she had been invited was to be their taxi driver and to visit Saúl, the almighty Saúl. Marian did not share the devotion the entire University of Cantabria seemed to feel for its professor of cultural anthropology. She had heard rumors . . .

A dark-haired girl was watching the group eagerly from a distance, seated on a public bench where her father had told her to wait. These were the first people she had seen since she had been released, other than her aunt and her father. He was affectionate now, as though repenting for what he had done to her.

She knew her brain was still not fully functioning. She wasn’t yet cleansed of the medication they had forced on her. She had convinced herself that water would flush out the remaining effects, so she was constantly drinking from her little plastic water bottle and then running to the bathroom.

It was a real pain, but it was necessary. She didn’t want to keep feeling hazy. She knew this camp might be her only chance, because when she went back to school in September . . . it would be impossible. Everyone there knew her father; he was a god to them. Plus, she would have to repeat her final year, and he wasn’t going to forgive her for that. How embarrassing!

So she couldn’t waste this opportunity. She needed to watch these people and choose the one who could help her.

She joined the group as her father led them along the streets to the Conde de San Diego palace, an imposing mansion with steep roofs that had been donated to the municipality by the owners. It could’ve used a coat of paint, but for the students it was more than adequate.

Two hours later, introductions were over and lunch had been served, but she still hadn’t decided. Maybe the tall, dark-haired boy with arms like an orangutan? He seemed to be the oldest in the group from Vitoria. Maybe she would talk to him. She couldn’t make up her mind.

She decided to concentrate on the most serious and responsible one in the group, the one with the hooked nose, Asier. He didn’t fool around like the others or laugh at dirty jokes, and, most importantly, she hadn’t seen him talk to her father at all.

She watched the new students go through the welcome ritual. This was the third time she’d seen it—the third summer of the program. She had been part of it from the beginning, their project to re-create an ancient Cantabrian settlement. She knew all about the Celts. Just like her father, who had taught her everything. And just like him, she had always known that she was going to be an archaeologist.

For three weeks, Saúl Tovar poured his energy into taking care of the small group of volunteers who had signed up to finish construction on four Iron Age huts.

They were all high school students, responsible, highly motivated. Clay ready to be molded. It was Saúl’s job to instill in them his passion for history, to sell them on the idea of attending the University of Cantabria, where he was an associate professor. He needed to impress the dean, become his right-hand man, in order to get tenure. He needed to provide stability for Rebeca, his shrunken family. It was all for his daughter: everything he did was for her.

This summer he had rented a minibus so that he wouldn’t have to worry about public transportation in July. From his experiences over the past two years, he’d learned that the students would work like crazy for the first few days, and then on the weekend, they would try to walk to Torrelavega or to las Fiestas del Carmen in San Vicente de la Barquera. He knew their enthusiasm would wane as the weeks went by. They would start paying less attention to the history and culture of the Celtic-Iberians and thinking more about members of the opposite sex. He needed some way to re-energize them, to get them out of the camp for a few days, so he could re-motivate them with his stories.

By mid-afternoon, after piling all the work equipment into the minibus, Saúl shepherded the students from Vitoria on board, and finally they set off for the Picu de la Torre, the hillside where the wooden skeletons of the Iron Age huts awaited them.

He turned the radio down. He hated Clapton’s “Tears in Heaven.” It was too unsettling.

The minibus had to avoid a couple of sixty-year-old cyclists who were straining to get up the hills. There were bicycles everywhere now, as thousands of fans had taken to the roads after Miguel Induráin’s triumph in the Giro d’Italia and his likely second victory in the Tour de France.

Saúl concentrated on driving. Rebeca was sitting next to him. Both of them were pretending their thoughts were elsewhere, but in fact they were paying close attention to the four boys and their conversation.

“I hope there’s a pay phone nearby. I have to call the hospital every night,” said the youngest, the good-looking one. He sounded concerned.

He had already caught Rebeca’s attention. He was wearing brand-name sneakers and red-label Levi’s 501s. This kid Jota was not only handsome, he had money.

A hospital? Saúl and Rebeca both thought, but neither asked for an explanation.

Be patient, they told themselves.

I’ll find out soon enough, they each decided.

“Of course there’ll be a phone,” said the dark-haired boy, the one the others called Unai. “Don’t worry, I bet there’ll be a booth there.”

“Yeah, man. And you know, if he gets worse, I’ll call my dad and we’ll be in Txagorritxu in two hours,” said the chubby one. He had a mop of greasy hair and was wearing a black Pearl Jam T-shirt. The others called him Lutxo. He spoke quickly and seemed very sure of himself.

It was obvious they were all looking out for the handsome one, the baby of the group: José Javier, also known as Jota.

“How are you feeling, Rebeca?” her father suddenly asked qui- etly, his eyes still fixed on the road as he drove calmly along. He didn’t speed; she couldn’t hold that against him.

How tempting it was to believe him. “Me too, Papa.”

That’s enough. I don’t want to talk about it, she thought.

“And did you have time to read the books I sent you? Cunliffe’s Atlas of World Archaeology and the others?”

Yes, I read them when I wasn’t groggy. They were the only thing that kept me . . . sane? she thought.

“Yes, Papa. Thanks for sending them.”

“I was thinking that tomorrow, when we run the building workshop for the new volunteers, maybe you could teach them how to make adobe and explain the heather roofs. It’ll be good practice for when you’re a professor. You know I’ll keep my job open for you when I retire,” he said, smiling with those magnificent teeth. His lantern jaw really did make him the handsomest father in the world. He looked nothing like her classmates’ fathers. They were all bald and paunchy, respectable patresfamilias.

Her father was devilishly attractive, and Rebeca had always known it. The looks her friends gave him when he picked her up from school were a daily reminder.

A large part of Saúl’s attraction was his blue-black hair, but he also dressed to look younger, wearing cool jeans, white T-shirts, and flannel button-downs. Rebeca had inherited his hair, but not his green almond eyes, which made him look like he was half sorcerer, half angel.

Her face lit up thinking about what he was promising her, and she realized that her face muscles were taut. She hadn’t smiled in months.

Maybe he does love me, maybe he’s really concerned about me, she thought, yet she couldn’t believe it completely. This kind of uncertainty distracted her from her plan. She couldn’t afford it. She wouldn’t get a second chance.

What's The Difference Between a Thriller and a Mystery? Pacing.

What's The Difference Between a Thriller and a Mystery? Pacing. Reading has always been a great escape in my life. Books gave me joy, taught me much, but mostly, they were entertainment. I...
© LitHub
Back to top