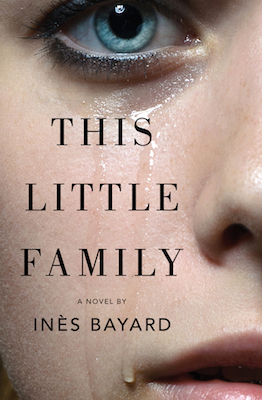 The following is an exclusive excerpt from This Little Family, by Inès Bayard and translated by Adriana Hunter. Marie and Laurent are trying to have a baby when Marie is assaulted while at work. When she discovers she is pregnant shortly thereafter, and is convinced the baby's father is her attacker, she begins to make changes to her life that have devastating consequences.

The shrill bell on the intercom rings through the apartment. It’s five thirty p.m. and Marie’s still in bed. She struggles to open her eyes to squint at the red numbers on her alarm clock. She remembers yesterday evening. She felt like having cocktails with vodka and pineapple juice. As she drained her third glass she realized she’d taken two sleeping pills a couple of hours earlier. The combination of alcohol and medication sent her into a deep sleep at just six in the evening. She gets up. Her head spins. She’s going to throw up. The bell is still invading her home. Someone’s determined to disturb her. She hasn’t tidied the apartment. She traipses into the corridor, crushes an orange juice carton.

The sticky liquid spills over the floor. She kicks aside several greasy fast-food boxes, slides along a wall to reach the front door. Her husband’s entire collection of miniature cars crashes to the floor. The broken pieces roll away, disappearing between the deep floorboards. Marie can’t open her eyes properly, the sleeping pills are still having a powerful effect. With one last effort, resting her elbows on the console table in the hall to stay on her feet, she manages to grab the handset of the intercom. Knowing she won’t be able to articulate a single word, she waits for an answer.

“Marie? It’s Mom.” Her mother is bringing the baby back. Marie drops the handset. Her mother yells to be let in, Marie automatically presses the button. Her body sways forward, backward, in every direction, like a lonely boat in the middle of a storm. She’s lost all her bearings, lost the energy to justify herself, fight her corner, clean, tidy up. Her brain isn’t getting enough blood anymore. It’s too late. She wants to lie down. She heads back to the living room and brushes the leftovers of pizza onto the carpet.

She hears her mother arrive and open the door. “Marie? Where the heck are you?” Then silence. Marie wants to sleep. She can feel her mother’s concern. Thomas is in his buggy, whimpering. “What the hell happened here? You . . . you need to get some fresh air in here. Marie! What is this?” Irene shakes her daughter’s inert body. She surveys the room. Marie tells her she took some sleeping pills the day before and that she’s still under the influence of them. Her mother gets up, draws back the curtains and opens all the windows one by one. A fresh breeze floods the apartment. There’s air inside again. Irene starts tidying up: with a garbage bag in one hand she picks up the detritus strewn all over the floor. “I’m going to make you a big mug of strong coffee to wake you up.” Marie hears water running. Her mother helps her to her feet, strips her completely naked. There’s dried blood on her thighs. Her pubic area is dirty, her armpits give off a strong smell of sweat that pervades the whole bathroom, there are long trails of white and yellow in her panties. Irene lifts her up to help her into the scalding water. Marie’s hands are filthy too, her black nails cling to her mother’s skinny arms while Irene battles with all her strength to hold her upright in the bath. Marie closes her eyes, her head leaning on the edge of the tub. Her face is gaunt, pained, puffy in places like an old hobo who has spent all her winters out of doors. “You relax. I’ll be back, I’m going to clean up the apartment and deal with Thomas. I’m staying here tonight.”

In the kitchen, Irene gathers all the plates and things piled up in the sink and puts them into the dishwasher. She doesn’t understand her daughter. She remembers Marie was always a mysterious little girl.

As a child, she never lied, but she told the truth only if asked direct questions. Marie’s father also cultivates this tendency for secrecy. Irene’s cell phone rings. She comes back into the living room from the kitchen that’s strewn with trash. It’s Laurent: “I can’t get hold of Marie. I’m kind of worried. Is everything okay? Are you at the apartment with her and Thomas?” Irene says she is, reassures him, tells him everything’s fine and there’s no need to worry. He’s coming home tomorrow evening. She’ll have time to clean everything up and deal with her daughter before he’s back.

She spots the pile of broken photo frames in the corner of the living room. She picks up the picture of Thomas and Laurent and puts it on the sideboard. “I forgot to put them back.” Marie is standing behind her mother. Water drips heavily from the ends of her wet hair.

“You can explain tomorrow if you want to. Right now, off to bed with you or you’ll fall over.”

Marie drifts away, dragging her feet. She isn’t ashamed. There are few women who are genuinely misanthropic and dare to shoulder the onus for not being productive and sociable. A man’s sloppiness is often seen as more natural, an expression of free-spiritedness even. A woman’s goes against nature. Over the course of this short week, Marie has felt rather proud that she belonged to this new generation of women who don’t do a fucking thing and whose only progeny is their own pleasure. Irene works her way through the chaos left by her daughter. Thomas watches from a distance, still strapped into his buggy. Impotently witnessing the catastrophe of his birth.

8 Debut Novels You Should Read This June 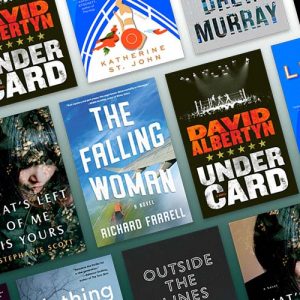 8 Debut Novels You Should Read This June Breaking into the crime game isn’t easy, but every month, a few brave and talented souls make a go of it. We’re scouring...
© LitHub
Back to top