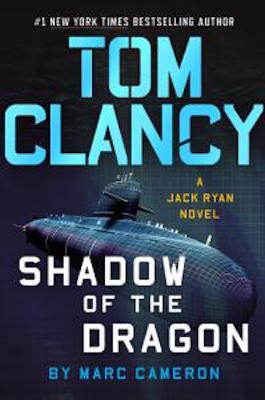 The following is an exclusive excerpt from Tom Clancy’s Shadow of the Dragon, by Marc Cameron. Liu Wangshu, a brilliant scientist, has gone missing and the Chinese Ministry of State Security is desperate to find him. President Jack Ryan is glad to help, but things grow complicated when he learns that a high-ranking Chinese mole has infiltrated the American government. And then sonar operators begin to pick up strange tremors along the floor of the Arctic Ocean.

The two men in the second-story window across the street from Huludao Smile Swimwear Ltd’s tiny office made no attempt to hide. Both wore long coats, as if they planned to step outside at any moment and brave the cold. Pei Ying could feel their eyes before she saw them. Rather than look up and meet their gaze, she went about her midday routine. She had not grown a successful business to squander all her money on propane to heat an empty office, and it had grown cold while she was away all morning visiting one of her factories. She lit the gas heater on the wall beside her cluttered desk, then dropped the blackened match into an ashtray with a nest of dozens of other burned stubs—the remnants of a long and bitter winter. The faint odor of gas made her think of her late husband and those early days of the company. She chuckled at that, despite the men lurking across the street. Anyone who looked at her office would surely believe her business was struggling. The tiny heater wouldn’t actually warm the cramped space until mid-April, but the blue flames and glowing ceramic tiles took the worst of the edge off. And anyway, Pei did not mind the cold. She enjoyed wearing a down jacket and sipping hot tea all day—an irony indeed for the owner of a company that manufactured skimpy swimsuits.

The main offices were located at the primary plant, nearer to the wharf, but Pei kept a personal office here, for the moments when she wanted to be away from the clatter of machinery and buzzing employees. It had been her husband’s office—and now it was hers. Just like the company.

Tucked into the ground floor, the office was in the same squat three-story building as her home. Everyone in the building called her Pei Ayi—Auntie Pei. Her apartment was upstairs—a short commute. She could have easily afforded a private villa—what people in the West called a single-family home. She had plenty of money if she’d wanted a high fence and her own yard, like the ones across the alley, but she preferred to roll her money back into the company. She was always at work anyway. A larger house was only more for her to clean. Her son’s wife had different notions, of course, and leaned on the boy to buy her a lavish apartment. The stupid girl gambled, too.

Perhaps the men across the street were here about Pei’s daughter-in-law. That would not be so bad.

Auntie Pei sat down behind a pile of invoices at her desk and took a sip of tea from a chipped mug, shooting a quick glance at the window across the street. One of the men drew back dingy yellow curtains with an open hand, peering down with narrowed, accusing eyes, like a falcon planning an attack stoop. He was young—as everyone seemed, to Auntie Pei—perhaps in his early thirties. His mussed hair was thick and long. A wide face screwed into a crooked frown, as if he were trying to twitch a fly off the end of his nose without using his hands. The second man stood a half-step back. This one was bald and clean shaven. Heavy glasses with black rims provided the only relief to an otherwise featureless egg. He blinked a lot behind the glasses. Surely this one followed the lead of the one with the frown.

Auntie Pei’s neck burned from their stares. Perhaps they had come for her.

Everyone in China knew they were being monitored, but there was safety in numbers. Herring swam in great schools to protect themselves from hunting tuna. But if that tuna zeroed in on a single fish, it was impossible to get lost, no matter how large the school. If Beijing—or even the local government—turned the scalding light of their attention on you, it was over. There was no point in pretending otherwise. Everyone had something to hide.

In Auntie Pei’s case, it was her half-sister. That would be enough to sink her for good.

The men across the street stayed indoors for the moment because it was raining, not because they cared about being seen. The bald head of the one on the right shone like a torch through the grimy glass. The smug frown on the other one was as noticeable as a festering boil.

They had to be MSS. Pei Ying was certain of it. Operatives from the Ministry of State Security—similar to a combined American FBI and CIA—tended to carry themselves differently from local police. They were haughty, highborn, like they could not wait to clean the likes of you off the bottom of their boots. She’d met worse men, but not many.

Standing again beside her desk, Pei flipped through a file folder, hardly seeing the figures on the paper. What could they possibly want with her?

Her social credit score, the Chinese national system used to indicate the trustworthiness of citizens, should have been near perfect.

Smile Swimwear contributed much to the economy. A quarter of all the bosoms and buttocks in the world were swaddled in fashionable swimsuits manufactured right here in Huludao—and a good many of those suits were born on the machines in Auntie Pei’s factories. Her late husband of twenty-three years had been a trade adviser to local Party officials. Auntie Pei served on the board of the yearly International Swimwear Show. She sat on a municipal planning committee for refuse recycling and donated blood every two months. She paid her bills on time, including her exorbitant taxes, and had no complaints to the police by her neighbors so far as she knew.

Could a rotten-egg sister in the family really ruin all of that?

The men were gone from the window now. Auntie Pei considered stepping out the back door of her office, but there was no point. Running would only make her look guilty.

Across the street, the MSS men stepped out the door of the apartment building. The bald one held a folded newspaper over his head, though the rain had tailed off. The leader, seemingly oblivious, stopped to light a cigarette he’d jammed into the slanting gash of his frown. Smoke and vapor curled around his face in the chilly air. He sniffed, like a hunter, and then stepped into the street.

Pei swallowed hard. To this man, her having a half-sister like Jun would cause all manner of hardship.

Four years younger than Pei Ying, Jun had dabbled in the practice of Falun Gong ten years earlier. China was an avowed atheist country, but Beijing allowed five religions. Falun Gong was not one of them, and its practice could bring the foot of the government down quite literally on the neck of anyone caught taking part. Beijing went so far as to demand local jurisdictions prosecute—and persecute—those who continued the practice. Jun’s block warden had denounced her to the head of the local 610 Office, fearful of punishment for violating the mandate. Men from the 610 Office—tasked with no other duty than to see to the eradication of Falun Gong—arrested Jun at a park, where she was walking her little dog. Her pet was left abandoned, and she was thrown in a white van, transported to a transformation-through-reeducation facility on the outskirts of Beijing. In many ways, Pei Ying felt sorry for Jun. She was interested in everything, flitting from one hobby to another. Cheap steel, their father had called the girl—easily sharpened but just as easily dulled.

She’d been caught up in the idea of Falun Gong, but had never been a devout follower. Official accounts said she’d fallen getting out of the van, but however it happened, both her feet were broken on the first day. By that night, she made a video statement that Falun Gong had been a horrible mistake and that it no longer interested her at all. She implored her friends to stay away. And they probably would—from her.

Auntie Pei felt sure the mindless woman would have made the same statement in return for a stick of chewing gum. There had been no need to break her feet.

She glanced through the window at the approaching men.

They barged in without knocking, as she knew they would. The bald one was older, somehow missing even his eyebrows, and smelled faintly of old socks. The younger wore his smug frown like an accessory, the way some men wore an expensive watch. Both were dressed in khaki slacks and striped, three-button polo shirts of slightly different patterns, though the younger one’s clothes were newer and better tended. He was single, Pei thought, and still cared what girls might think of him. The stinky, browless one was comfortably married and beyond such trivialities as grooming and hygiene.

Mr. Frown did the talking.

“Professor Liu,” he snapped, hooking a thumb over his shoulder toward the house across the alley from her office. The sneer perked into the slightest of smiles when Auntie Pei blanched at the sight of the black pistol as his shirttail rode up.

She put a hand on her desk to steady herself. “What?”

“Professor Liu Wangshu!” the man barked, louder this time. “When did you see him last?

“Ah, ah.” Pei clucked, struggling to control her breathing. They were not here for her after all, but for Liu, the university professor who lived in one of the villas across the alley. These were not the first men who had come to talk to him. Instead of waning, her sense of dread grew deeper, pressing at her chest, making it difficult to speak.

She swallowed, lifting the teacup in a remarkably steady hand. “It has been at least two weeks. Maybe three. I assumed he was away on a business trip. He travels someti—”

“We are quite aware of how often he travels,” Mr. Frown said. The MSS man gestured over his shoulder again, this time for the benefit of his balding partner. “She is useless.”

Both men wheeled and strode out the door without another word.

When it came to members of the Ministry of State Security, useless was a very good thing to be. Perhaps she would be able to keep herself from becoming embroiled in whatever this was. She opened the lap drawer of her desk and took out a slip of paper, reading the number out loud to steady herself as she entered it into her phone. The tall man who had left her the paper was from the government. He wore a hat, pulled low over his eyes, but took it off when he spoke to her, respectful, not like the bad-egg MSS officers. He understood Auntie Pei’s standing in the community. Still, there was danger to him. Not aimed at her, but to whomever he happened to be hunting. His instructions had been clear—couched as a polite request.

Should anyone come looking for Professor Liu, she was to call him immediately, day or night.

It was a simple favor, he said. Auntie Pei knew better.

In Praise of Second Chances 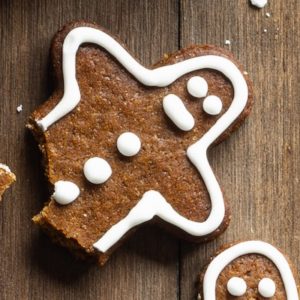 The Surprisingly Dark History of Gingerbread The pudgy gingerbread man with his candy eyes and icing smile has a sinister backstory—a link to death and the demonic....
© LitHub
Back to top