Stefan Spjut, translated from the Swedish by Agnes Broomé 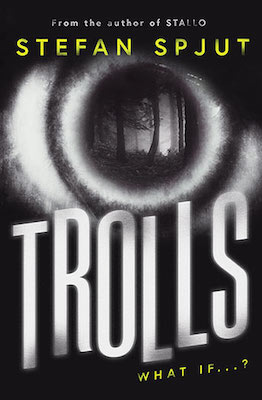 The following is an exclusive excerpt from Trolls, by Stefan Spjut. The companion to his novel Stallo, Trolls is set ten years later. Lennart Brosth, an enigmatic cult leader, escapes from his psychiatric facility, shortly around the time a giant wolf escapes from captivity. The specialist team sent find the wolf never returns. And these mysterious events cause a traumatized woman named Susso Myren, who now lives as a recluse after tragic events in her past, to finally come out of her exile.

Every time Anders tried to explain to her how he remembered things, or rather, how he didn’t remember them, how they were like white spots in his head, she just nodded at him. Almost imperceptibly, but like she knew what he meant, even though she couldn’t possibly; it really irked him. She just wanted to get rid of him. That much he had gathered. She wanted him to admit himself to the psych ward in Örebro.

A word she kept circling back to in these conversations was shock. She talked about shock as though it had taken over his body, consequently absolving him of any moral responsibility. It was the shock that had scared him into the car and made him drive all the way home after the wolf killed Geir. The police had calculated that it would have taken him approximately ten hours and that he had stopped for petrol in Örnsköldsvik; listening to their description of his journey was like listening to an account of what he had got up to during a monumental bender.

According to Johanna, there was nothing to be ashamed about. He had been through a horrific ordeal. The reason she underscored this was that a lot of people felt he should have intervened. A kick in the arse would probably have scared the wolf off. And the wound the beast had torn in Geir’s throat was probably shallow enough his life could have been saved. If he had tried. Instead of jumping in his car and hightailing it out of there. What thoughts had run through his mind during those ten hours?

None at all. It had been completely blank.

Pointing to the shock had made sense. Everyone knew shock made people act irrationally. Johanna had told him about a father who had dashed about on the motorway outside Fagersta, gathering up his dead child’s scattered body parts, shouting at people to help him so they could start putting the child back together. A completely ordinary father, stunned by shock.

Yes, he blamed the shock. He could also blame the shame. When it was time for Geir’s funeral, he had let it be known that he couldn’t face Geir’s loved ones and colleagues, who thought he had acted cowardly, and indirectly blamed him for Geir’s death. I think I was already feeling ashamed in the car, he had said. It was something he had arrived at through speculation and Johanna had understood. Everyone had understood. Or at least they had made out as though they understood. During the weeks following the incident, he had been wrapped in a cocoon of understanding. The department had sent flowers. The police officers who came to his house to ask questions had put on their kid gloves.

And then he had been fired. That was what they were supposed to talk about. It was half past ten at night and a fine rain was pattering against the plastic roof of the veranda. She was concerned about his memory lapses and wanted him to seek help. That was what she was getting at. He tried to dismiss her concern and when that didn’t work he changed tack and claimed William had misunderstood. Of course he knew he had lost his job. He had just gone out to Grimsö to pick up some things. Some personal belongings. A map, among other things.

‘So you don’t have memory lapses?’

‘No, I do, but mostly from that night and the days that followed. That’s blurry, but otherwise it’s not too bad.’

‘Do you remember acting violently?’

‘What do you mean violently?’

‘You’ve shoved me several times, and William too. He’s terrified of you and to be honest, so am I.’

‘One night when I tried to stop you from leaving the house, you grabbed me by the throat.’

‘What on earth is that supposed to mean?’

She showed him her neck.

‘I grabbed you by the throat?’

‘I must have been sleepwalking then.’

She raised her eyebrows.

‘I must have been. If what you’re saying is true.’

‘Are you implying that I’m lying to you?’

‘It just seems so strange.’

She crossed her arms and smiled.

“I mean, how do you think it feels when someone tells you you’ve done all these awful things that you can’t remember doing?”

‘I mean, how do you think it feels when someone tells you you’ve done all these awful things that you can’t remember doing? Huh! Am I supposed to just accept it? You could say whatever the fuck you want and I’m supposed to be all like, oh really sorry, I was bad, I shouldn’t have done that, sorry, sorry.’

She pulled out her phone. Opened something on it and handed it to him across the table. He pushed his glasses up to his hairline.

It was a picture of her throat. Her head was back and her chin tilted up. A small root system of red streaks fanned out across her skin.

‘How do you think it feels when someone who’s hurt you denies it even happened?’

‘It was the first night you left the house. Since then, I haven’t stopped you. I’m sure you can understand why.’

He didn’t respond. Her tone had hardened and he noticed it was getting his dander up, but he didn’t want that to show.

‘You don’t remember this?’

He heaved a sigh.

‘That’s frightening. That you don’t remember. And it can’t go on like this.’

He pulled his glasses back down.

‘You think it’s frightening. How do you think it makes me feel?’

‘It doesn’t really matter how you feel. Because by tomorrow, you’ll have forgotten. And then we’ll be here again. I should start bloody recording it.’

‘But I do have memories, Johanna. Faint memories. I can’t sleep. I have nightmares and then I can’t go back to sleep. So I go outside for some fresh air. What’s so weird about that?’

‘It’s nice in the woods. Relaxing.’

‘Relaxing? Yeah, I know what relaxes you.’

She shook her head at his perplexed look.

He was silent for a moment, pondering what to say.

‘Let me explain what it’s like. When I’m out there, it’s kind of like a dream. Like being half naked. Half waking. It’s hard to explain. I suppose it’s the shock that hasn’t worn off. These things take time, Johanna. But we can’t let it get to us. It will pass.’

‘Anyway, isn’t it dangerous to stop a sleepwalker? Aren’t you supposed to get out of their way? Because things like that can happen.’

She studied him through narrowed eyes.

‘I think I’ve heard that,’ he said. ‘That you should get out of their way.’

‘So you’re sleepwalking, that’s your explanation?’

‘I obviously meant I must have been sleepwalking that time you tried to stop me. Since I reacted like I did and grabbed you. But normally I go for walks. Long walks. I’m aware of that.’

She looked at him with eyes sizzling with suppressed rage. ‘I know who she is.’

‘You go to that construction trailer.’

‘It’s that woman, that Finnish woman who came here. The wolf woman.’

‘She was from some organisation. Some predator organisation or whatever. And she asked lots of questions about the wolf you were going to move. Maybe a month ago. You don’t remember that?’

He shook his head, even though she had clearly meant it as a scornful swipe at him rather than a question. He looked at her, pleadingly. He was at the end of his tether, couldn’t she tell? But there was nothing in her face, no trace, to suggest she intended to retreat so much as an inch.

He stood up and went back inside. He didn’t know where to go, so he ended up in the bedroom and when he heard her footsteps, he quickly closed the door behind him. She opened it. By then, he had sat down on the edge of the bed. He was hunched over, with his head down and his elbows on his knees, as though inviting her to sit down next to him and maybe stroke his back.

She leaned against the doorpost, arms crossed.

The words came out in a slurred mass.

She laughed at him.

‘Worried? That’s how I felt the first few weeks, Anders. There’s nothing left of that now, just so you know. Nothing but a lot of fucking anger.’

She was screaming now, venting the fury that had been simmering under the surface.

‘You watch TV all day, feeling sorry for yourself, and at night you sneak out and fuck some bloody slag in the woods! And then you pretend nothing’s going on.’

‘But I don’t, I don’t know what you’re talking about!’

‘I don’t know what you’re talking about. That’s all you ever say.’

‘You don’t know what it’s like. What it’s like in here.’ He slapped his forehead hard. His voice was breaking. She turned around. She couldn’t even look at him any more.

‘And this might be the worst thing,’ she said. ‘That you feel so damn sorry for yourself. First you deny everything, and then you sit here feeling sorry for yourself. It’s a pattern. You come in here every time. Do you know that? You sit there, in that exact spot!’

‘You need to get help, Anders. Because this has got out of hand.’

He nodded and she left, and he stayed on the bed and looked at the floor and when he eventually got up, it was because he was wondering why Johanna hadn’t come to bed even though it was past eleven. 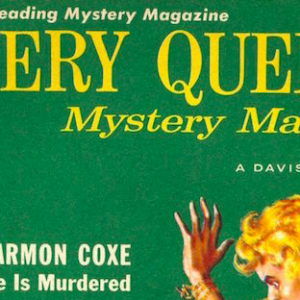 CrimeReads Brief: Week of October 5th How much access (if any) should police have to genetic databanks? The debate over forensic genealogy continues....
© LitHub
Back to top