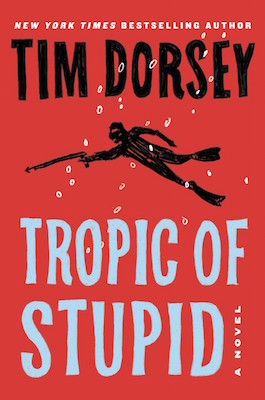 The following is an exclusive excerpt from Tropic of Stupid, by Tim Dorsey. Serge A. Storms is back, and this time, he's armed with the results from his DNA test, ready to do a genealogy that will help him meet long-lost family. Turns out, he might be related to one of Florida's worst serial killers, and finds himself organizing a far deadlier family reunion than he could have ever imagined.

The Kokomo Cat II cut a straight bearing toward something in the distance: a single triangular orange marker amid whitecaps over the shallows. A handful of other boats were already scattered above the reef, attached to mooring buoys installed by the preservation authorities to prevent anchor damage.

Conversation among the divers quieted, a counterpoint to the boat’s hull loudly smashing up and down on the waves, shooting water over the railings. Many of the passengers—especially first-time visitors—watched over the side as the sea went by, getting naturally stoned on the Keys phenomenon of the rapidly changing palette of vibrant colors, from emerald green to turquoise, aqua and ultramarine blue.

The orange triangle grew larger as the Kokomo began to slow. Starboard passengers pointed at a giant shell of a loggerhead turtle bobbing remotely atop the depths. Others leaned over the port side to view silhouettes of stingrays a couple of feet under the surface.

“Coleman, listen up and learn something.” Serge turned around toward the captain’s console. “Katie, you’ll dig this. You know how Looe Key got its name?”

“Of course. The British ship.”

“Yeah, but I dug deeper because history is the shit! The name all started when some dude got his ear chopped off!”

“I swear it’s all true!” said Serge. “In 1731, the Spanish boarded the Rebecca, a big-rigged English sailing ship, right off the coast of Florida. Then they cut off the captain’s ear because I guess that was supposed to be funny back then. But the British weren’t laughing, and the drums of war began beating, and there’s even a story that the severed ear was actually held up in Parliament to rally the base. I think that’s the natural progression of where Washington is heading today, so don’t be surprised when C-SPAN gets bloody. Anyhow, it started a conflict that raged around the coasts of Florida and Georgia, and one of the dispatched ships was the HMS Looe, commanded by Captain Ashby Utting. In 1744, it captured a Spanish ship and was towing it along the Keys, but both vessels ran aground because who would expect it to be so shallow this far from shore? Then it really does get funny . . .” Serge’s eyelids began fluttering like he was possessed.

“Are you okay?” asked the captain.

“Just throwing my imagination’s engine room into warp speed.” He began slapping his cheeks with both hands. “I’m overlaying eighteenth-century images on today’s vista up ahead. See all those dive boats moored at the buoys? Now imagine a wacky scene where they’re all chasing each other around like Keystone Cops.”

“Are you making this up?” said Katie.

“If I’m lying I’m dying,” said Serge. “After the boats grounded, there were other Spanish ships in the area, and the British were sitting ducks. So they dropped the frigate’s three smaller patrol boats in the water, but they didn’t have nearly the capacity for the whole crew. And of course the Spanish are freaking out in the towed vessel, and one of the patrol boats spots a sloop called Betty—no insight there—and starts chasing it around, and other Spanish boats are coming in to join the swirling bumper-car madness.The sloop is captured, and the British offload onto it and set their ship on fire, and everyone scatters like roaches when the lights come on, with the various vessels ending up in South Carolina, the Bahamas and Cuba. Can you dig it? Can you see it?”

Katie just smiled in amusement as she throttled all the way down, and the first mate grabbed a long pole with a hook to snag one of the buoys.

“No, seriously! Look at them out there all relaxed, not expecting military conflict. We’ll come barreling down on them screaming about an ear! Imagine their delight at the extra-value entertainment from their trip as we disperse them in panic-circles!”

“I’ll bet nobody’s thought of it before. It’ll become your signature feature, distinguishing you from the boring dive services that just dive. Next time we can even drag a shitty old boat to set on fire! You’ll make the news!”

“On another subject,” said Katie, “I know you’re good to go in the water, but do you think your friend needs a safety vest? He can always inflate it by blowing in that little tube if he gets in trouble.”

“In that case we’d better inflate it now.” Serge fitted the yellow vest over Coleman’s head and blew it up. “Okay, buddy, this is it. They’re about to unhook the chain and the captain will say, ‘The pool’s open,’ and you just follow me in.”

Serge zipped up his booties and strapped on the fins and mask. Then he sat coiled like he was about to parachute out the back of a troop transport plane.

Serge plunged over the side.

Serge popped back to the surface. “Coleman, what are you waiting for? The water’s great!”

“Just step off the side and let gravity do the rest.”

“Here goes.” Coleman meant to drop straight in, but instead managed to pinwheel off the boat and belly flop. “Ow.”

Serge helped his buddy turn his mask back around. “You know what a grouper is?”

“There are a couple of famous goliath groupers out here,” said Serge. “Huge suckers, five hundred pounds. They like the shade under the boat.”

“I’m telling you this to prepare you,” said Serge. “I want you to enjoy the experience and not have a heart attack. There’s one under the Kokomo right now.” 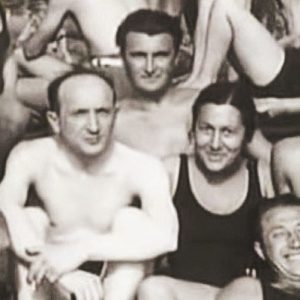 The Most Enduring Imposters in Crime Fiction and Espionage Imposters play a role in many contemporary novels, including Stephen King’s The Outsider, Bret Easton Ellis’s Glamorama,...
© LitHub
Back to top