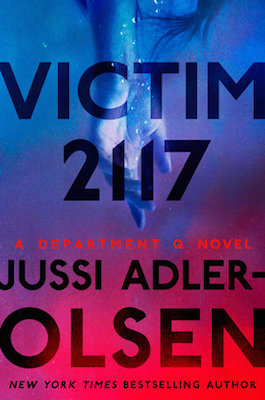 The following is an exclusive excerpt from VICTIM 2117, by Jussi Adler-Olsen. Department Q, Copenhagen’s cold cases office, under the command of Detective Carl Mørck, is thrown for a loop after the discovery of the 2117th refugee who has died in the Mediterranean Sea. More than simply a tragic accident, though, it becomes a mystery with devastating global implications.

“No, you can’t have your travel expenses covered as a freelancer if it isn’t agreed beforehand. How often do we need to tell you, Joan?”

“But I have the receipts here. Look, I have a complete travel budget!”

He pushed the folder with the tickets to Cyprus and evidence for all his other sundry expenses across the desk and flashed his best smile. He was more than familiar with Marta Torras’s authority as an office assistant, so what right did she have to refuse him, especially now.

“Didn’t you see my article on the front page yesterday, Marta? It wasn’t just some column in the supplement; it was no less than the top story at Hores del dia—and the best I’ve ever written. I know for a fact that accounts will approve my sixteen-hundred euros. Have a heart, Marta, I can’t afford to pay the travel expenses myself. I borrowed the money from my ex.”

And Joan’s imploring expression wasn’t just for effect. His ex had smacked him one and threatened to report him to the police. She called him a thief and cried because she knew that she would never see the sixteen-hundred euros again. Then she had put out her hand and demanded that he return the key to her shop. And with that the relationship was no longer just finished, it was well and truly over.

“And accounts will approve this for a fact, you reckon? Ha! Well, I am accounts, Joan,” she snorted. “And your ex must be a total idiot if she thinks you can just swan in here and demand money from the paper whenever you feel like it.”

Joan was still regaining his composure as she walked back behind her desk.

“Well, at least refund my flights, Marta. The paper can deduct it anyway.”

“Complain to your editor. See if that helps,” she said tersely. She didn’t even bother to look up.

He had perhaps expected a little applause from the editorial office. Well-deserved recognition that his reporting had finally given Hores del dia a scoop for which they had won the recognition of the world press. The international media had even used his photos. A drowned old woman in a fur coat bathed in floodlight, the bodies on the beach, the screaming women. Hores del dia had probably earned a fortune from it. But apart from a young foreign correspondent who visibly shook her head as Joan walked through the cubicles of the permanently employed staff, there was no reaction from anyone. Not even a nod or a faint smile. What the hell? In films, your colleagues always stood up and clapped for something like this. What was wrong?

“I’ve only got five minutes, so keep it brief, Joan.” His editor closed the office door and seemingly forgot to invite Joan to take a seat, which he did anyway.

“Marta from accounts has just called to tell me you want your travel expenses covered.” She looked at him sternly from over her glasses. “You can forget that, Joan. You’ll receive the eleven-hundred euros for the Ayia Napa article that I was stupid enough to promise you when you submitted it. Not a cent more. And you should be grateful for that.” Joan didn’t understand. He had assumed the story about the drowned woman would result in a bonus and the prospect of a permanent job. So why was Montse Vigo, the editor in charge of freelancers, staring at him like he had spat on her?

“You’ve made a laughingstock out of us, Joan.”

Joan shook his head. What on earth did she mean?

“Right, well then let me fill you in about how the story of victim number 2117 has developed. It certainly seemed like a good story yesterday. However, this morning, this was printed in at least fifty international newspapers—not to mention that every paper in Barcelona except us has the same story. The bottom line is that you didn’t do your job properly, Joan. You don’t even come close to your colleagues. You should’ve done your research when you were in the thick of it, my fine friend.”

She slammed a few of the Spanish dailies on the table in front of him, and the headline nearly made him gasp.

‘Information in Hores del dia about victim 2117 is incorrect. The woman did not drown; she was murdered. Brutally stabbed to death.’

Then his editor pointed to a line a little further down. ‘Information in Hores del dia about victim 2117 is incorrect. The woman did not drown; she was murdered. Brutally stabbed to death.’

“You are aware that such a poorly researched story reflects badly on me,” she said, brushing the humiliating pile to one side on the table. “But the fault is mine, of course. I should’ve seen it coming after the uninspiring features you tried to fob off on us.”

“I don’t get it,” he implored, and he really didn’t. “I watched her wash ashore. I was there when it happened. You’ve seen my photos.”

“Then you should’ve waited to take your photographs until they’d turned the woman over. She was stabbed straight in the back of the neck between the third and fourth neck bone with something this long.” She demonstrated the length with her hands. “Death was immediate. Thank god we aren’t the only ones who’ve made fools of ourselves. TV11 have certainly changed their glorified images of the young man who washed ashore in Ayia Napa the day you were there. Turns out he was the leader of a terror cell.”

Joan was shaken. Murdered? Was that what her eyes had told him? Should he . . . Should he have seen it?

Joan turned toward his editor. He wanted to explain the experience he had with the woman. Why he hadn’t done his job better. That he had allowed himself to be affected and that he knew all too well that journalists shouldn’t allow that to happen.

There was a knock at the door and Marta from accounts entered the room. She handed two envelopes to Montse Vigo and left without so much as glancing at Joan.

The editor handed one of them to Joan. “Here’s your eleven-hundred euros, although you don’t deserve it.”

Joan took the envelope without saying a word. Bullying came with Montse Vigo’s job, so what could he do? Nothing! He bowed a little and turned to sneak out the door. The question was how long this envelope could sustain him. He was already beginning to sweat.

“Where do you think you’re going?” he heard from behind him. “You aren’t getting off so lightly.”

SHORTLY AFTER, HE was standing on the street staring up at the building. Another demonstration was heading toward town from Diagonal with the accompanying sound of whistles, slogans, shouts, and aggressive sounding car horns, and yet the only sound resounding in his head was what his editor had just said.

“Here is five thousand euros. You have exactly fourteen days to get to the bottom of this story, and you’re on your own, got it? You’re an emergency solution because none of your colleagues will touch this case. Too many leads have gone cold already. But you’re going to warm them up; you owe the paper that much. Find some of the survivors who can tell you who the woman was and what actually happened to her. Understood? You know from your interviews with some of the survivors that she was with two women, one younger and one older, and that a man with a full beard was speaking with them during the voyage—right up until the inflatable raft sank. Find them. You know who they are because you have photos of them. I want daily updates about your whereabouts and what you’re up to. In the meantime, the editorial office will spin the story to keep it hot. The five thousand euros will have to cover everything you do; do you understand? I couldn’t care less who you bribe or where you live. If you don’t have enough money for somewhere to stay, sleep on the street; if you don’t have enough money to eat, starve. Do not turn up here asking for more money until the job is done, understood? This isn’t El País.”

He had nodded and felt the weight of the envelope. What else could he do but see the job through?

A Brief History of Sex and Espionage

A Brief History of Sex and Espionage Agent motivation—why spies spy—is a complex subject. As in the case of Delilah, what seems at first sight to be the reason...
© LitHub
Back to top