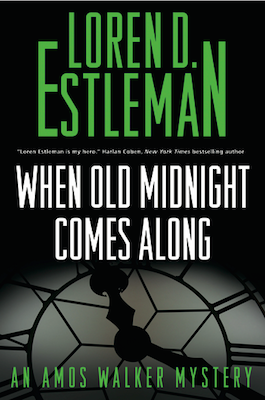 The following is an exclusive excerpt from When Old Midnight Comes Along, by Loren Estleman. Amos Walker is hired by a Detroit tycoon named Francis X. Lawes whose wife Paula disappeared six years earlier, to prove that Paula is truly dead, so that Lawes can marry again. But Lawes is still the prime suspect on the old case. But if he is guilty, why is he stirring up the inquiry again? And if he’s not, has a killer been roaming free for six years?

If you want to know how the local sports teams are doing, but aren’t curious enough to read a paper or watch TV, swing by the Coleman A. Young Municipal Center. There, in front of the blank wall facing Woodward Avenue, squats The Spirit of Detroit, a ton or so of verdigris copper, popularly known as the Jolly Green Giant, holding a radiating sphere aloft in one hand and a nuclear family in the other. If at playoff time it’s wearing a huge jersey carrying the insignia of the Tigers, Lions, Red Wings, or Pistons, we’ve got a dog in the hunt. This year it just had its breechclout, and it was lucky to still have that.

Francis X. Lawes dealt city services to private contractors from a small suite on the fifteenth floor, far enough away from the current mayor’s office on Nineteen to quash suspicions of too much elbow-rubbing. According to the article I’d read, the company rented the space from the city and the CEO collected no commissions on the construction and maintenance contracts he negotiated; he worked entirely on salary, out of which he paid his staff. Just how much that was didn’t make the piece. A long walk down a windowless hall brought me to a plain door with a plastic card in a slot, containing only the suite number and the lawes group in white letters. It looked like the entry to the office of a community-college instructor who doubled as the coach of the debate team.

The reception room wasn’t much larger than mine, and although the furniture was newer (my budget managed old, avoiding the suspicious aura of antiquity) and the walls cheerier—tangerine, eggshell blue, moss green, and cream yellow alternating—whoever decorated it probably wouldn’t have set me back more than a year’s income.

After a certain point, a penny saved is a dollar skimmed.

It was all very modest and understated, including the young woman behind the desk with her strawberry blond hair caught behind her head and eyeglass frames to match, a far cry from the gangsta plush of a couple of previous administrations, and wouldn’t have raised an eyebrow in a room full of federal watchdogs. Community-service certificates in frames were the sole decoration. It was unpretention bordering on pretentious; one more sign of responsible spending and I’d have pegged it as stage art. After a certain point, a penny saved is a dollar skimmed.

I told her who I was and that her boss was expecting me. She used an intercom and asked me to take a seat.

“Thanks. I’ve done enough of that today. They say sitting is the new smoking.”

She was turning that over to look at the other side when one of three communicating doors opened and a woman who was not as tall and not as bony and not at all as black as Deborah Stonesmith came in, although she was tall and slim enough. Her hair was short, cut in bangs at a thirty-degree angle on a broad forehead, and way too pale for someone in her mid-thirties; white is the new blond. It contrasted sharply with her Florida tan. Eyes brown with gold flecks, mile-high cheekbones, a chin that imitated the contours of a pear-shaped diamond. Her neck wasn’t quite long enough to tie in a knot. White heavy-silk blouse, French cuffs linked with onyx, snug gray skirt cut like her bangs, starting two inches above her right knee angling down to two inches below her left. Oxblood patent-leather pumps on her feet, with four-inch heels. The angle, combined with the altitude, made me feel a little queasy, but that might have been the imported pie and smelted-lead coffee I’d had for lunch. She stood with arms folded loosely and one trim ankle crossed in front of the other, a runway pose.

“Perhaps I can help? I’m Holly Pride. I manage the office.”

“It’s nice to meet you, but I didn’t order a Holly Pride. I’m waiting on a Francis X. Lawes.”

“Mr. Lawes is busy at the moment, Mr.—?” She raised arched eyebrows at the blonde, who mouthed my surname. “—Walker. I’m in charge of all the business conducted by The Lawes Group.”

“I’m not here on Lawes Group business. My business is with Lawes.”

I got the full body scan. I didn’t have to wait three days for the result: wrong suit, wrong shoes, wrong face. “Will you follow me, please?” She reversed her ankles, turning her body in the direction of the door she’d come through.

“As long as it leads to Lawes.”

I’d run all my lines, and in any case the blonde behind the desk was showing too much interest in the matinee. Holly Pride held the door for me and I entered an office with a window offering a view of the Detroit River. It seemed I couldn’t get away from the river today. It was a fairly Spartan setup, in keeping with the rest of the place: pastel blue walls, architect’s steelpoint drawings in plain frames, a flat-panel desk holding up the usual equipment, including a stand-up photo with its blank back facing me.

She leaned her hips back against the desk and crossed her ankles the other way. When she did the same with her arms, a ring on her left hand sent off strobes. I shifted positions to keep the glare out of my eyes.

“Right the first time.” Her pale-gloss lips bent up stiffly at the corners like wire.

“Such names do not fall to those of human lot.”

A crease marred the smooth surface of her brow. “Confucius?”

“Close. Charlie Chan. Holly, maybe. Pride, possibly. Together they play like a conspiracy theory: Too tight, no flaws.”

“Suppose I let your curiosity go on fluttering in the wind, how would that be?”

“Disastrous. My work’s made up entirely of questions and answers. Who was it said if nothing’s accomplished, no work was done?”

“Obviously not Congress. Just what is your business?”

“We settled that outside. Good-bye, Ms. Pride. It’s been lovely.” I turned and grasped the doorknob.

“Where are you going?”

“Where I started; Mr. Lawes’s office. I think I can find it. It’s not that big a suite, and I’m a trained detective. That’s what you’ve been trying to find out, isn’t it?”

“If you go prowling around, I’ll have to call security. One of my responsibilities is to shield Fran—Mr. Lawes from annoying interruptions.”

“My only responsibility is to see Francis—since we’re being informal. I can’t do that while I’m standing here talking in circles. I’m here by arrangement with him.”

“Is it about Paula Lawes?”

I smiled. I’d gotten something out of the side trip after all.

“If he didn’t tell you what it’s about,” I said, “it’s not my secret to share.” I opened the door, looking back over my shoulder. “By the way, is it congratulations, or good luck? Lawes gets one, you the other, but I’m fuzzy on the etiquette.”

She glanced toward the picture on her desk. I still couldn’t see who was in it, but now I didn’t have to. “Who told you?”

“Observation and instinct, and one of those hunches that hardly ever pan out. The ring helped,” I said, when she looked down at it. “But you’re already asking the kind of questions a wife asks about her husband. He’s picky when it comes to choosing a mate, if the pictures I’ve seen of Paula Lawes mean anything, and the kind of women he generally comes into contact with are in politics. The only really good-looking ones are in Hollywood, playing politicians. That leaves you and the blonde outside, who on short acquaintance has the personality of a paper clip.”

“Impressive—and insulting to slightly more than half the world’s population. You aren’t much on people skills, Mr. Walker.”

“It depends on which skills are required for the particular job. Good-bye again, Ms. Pride, and best wishes on your betrothal.” I let myself out and pulled the door shut behind me.

The Best Books of 2019: Psychological Thrillers

Cozy Mysteries Represent the Way Life Should Be 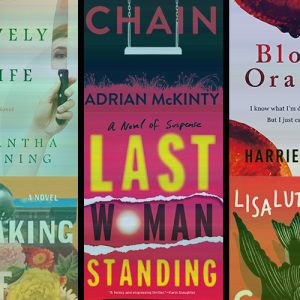 The Best Books of 2019: Psychological Thrillers Looking over our list of our favorite works of psychological suspense in 2019, I count exactly one man (don’t worry, we’ll...
© LitHub
Back to top