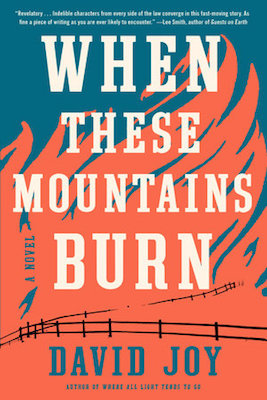 The following is an exclusive excerpt from When These Mountains Burn, by David Joy. A devastated father, a petty thief feeding an addiction, and a tough DEA agent all cross paths as they each pursue justice.

On a Tuesday, Denny woke up shivering in the passenger seat of his LeBaron. He couldn’t see anything through the windshield. The glass was snow white and he was freezing cold. For a second, he wondered if he’d slept all the way through the last of fall, or maybe it was that he just couldn’t remember all those days between. His neck locked up as he tried to turn his head and he cringed in pain when he reached for the ignition. Rolling the key to the accessory position, he twisted the dial on the turn signal and the wipers slapped across the glass. Outside, the mountains were just as he’d left them.

The air was filled with smoke. Ash fell from the sky. The car was covered, as was the ground where he stood. There was something strange about knowing everything was burning down around him, but not being able to see the flames. He’d caught the news on a screen at the gas station pump while he rattled the last of five dollars into his tank. Wildfires stretched the Appalachian chain from Alabama to Kentucky, tens of thousands of acres burning across western North Carolina alone and not a drop of rain to come. The sky was yellow with smoke and for Denny Rattler it felt like a sign from God. Deep down he figured it was probably the end of the world.

He was thinking about the Rapture while he scarfed down a sausage biscuit outside McDonald’s. The restaurant was connected to a Shell gas station. Passing traffic hooked off 441 headed for the casino. Grape jelly dripped from the corner of his mouth. There was a dumbstruck look about him because he was dope dreaming, which was a lot like daydreaming except sometimes it lasted for hours. He’d shot the last bag he had before the sun broke the ridgeline that morning, a paler blue just beginning to eat away the night.

There wasn’t any money left and he didn’t know how he was going to scrounge up enough to keep the run going. Per cap checks weren’t coming till December and that last batch of break-ins had caught a front-page story on the One Feather. He was going to have to hang low for a while. Ride it out while things cooled down. The traffic continued to file onto Casino Trail and he thought if worse came to worst he’d just break into a few cars outside Harrah’s. If a man stuck to out-of-state tags the tribal police wouldn’t bat an eye.

Out of nowhere someone banged on the side glass and Denny jerked across the cab like a wildcat was on him. Some lanky white son of a bitch was keeled over horse laughing and it took Denny a second or two to recognize him. A few years back, when Denny was still framing houses and roofing, they’d worked a couple jobs together, but he hadn’t seen the guy since. Couldn’t remember the man’s name to save his life.

He rolled down the window and hung his arm down the door. “What the fuck’s wrong with you?”

“You’re Denny, ain’t you?” He spoke normal speed, but moved sluggish as one of those three-toed sloths on the animal channel.

“Boy, I scared you good.” The man cackled again, slammed his hands on the roof of the car, and leaned into the open window. “You don’t remember me, do you?”

Denny could see track marks lined up like chigger bites down the man’s forearms. His long, narrow face was starved down to the bone and his eyes were solid brown, his pupils having dialed back to needlepoints. “Yeah, I remember,” Denny said. “We worked a few jobs together. Maybe one of those houses over in Barkers Creek.”

“That’s right,” the man said. He smiled real wide and the way the dope had thinned his face made his teeth too big for his mouth and he kept licking his tongue across the fronts of them. “Boy, they’re putting up the houses now, ain’t they? You still working for Josh Ward?”

“We was doing some tree work and some young kid had run the lines and I didn’t think to double-check them before I climbed. Next thing I knew I was flat on my back. Couldn’t move my fingers or toes.”

“And now you’re running the long hustle, huh, you lucky son of a bitch? Long as they keep sending the checks, I’d keep cashing them,” but what that fellow didn’t know was that Denny’d been denied disability and wasn’t fetching a dime.

“Breedlove,” the man said. “Everybody calls me Breedlove.”

“Don’t worry about it. Listen . . .” Breedlove leaned back from the car and glanced around the parking lot as if he were making sure no one was around. He wore a white T-shirt with cut-off sleeves that had an American flag and a hot rod on the front. “I was wondering if you knew where we could find some horse.”

“We got money.” Breedlove nodded back toward a funny-looking ride parked a few spaces down, a piecemealed pickup cobbled together with spare parts and bubble gum welds. The quarter panels, hood, and doors were all different colors so that the body looked like a patchwork quilt. There was a diamond plate toolbox stretched across the bed. “We just need somebody to find it. Like I said, we got the money. Guy we get ours off ain’t picking up his phone, and my buddy in the truck’s done wore out his welcome where he gets his. I don’t know. But you help us find some, we’ll do you right. You got my word on that.”

Denny figured this man’s word wasn’t worth a jar full of frog guts. He cut his eyes over at the car. Two people shared the cab, but from his angle he could only make out the man sitting against the passenger window. The fellow was staring right at him, a dark purple bruise surrounding the man’s left eye like a birthmark. His lip was busted. Looked like he’d had the shit kicked out of him. When he saw Denny staring, he turned away, propped his elbow on the door, and hid his face behind his hand.

There was a reason Denny Rattler preferred to do things alone—the break-ins, the dope, life in general. A man gets gooned out and he gets about as trustworthy as a church snake. You can drape a copperhead around your neck like a scarf and scream about Jesus all you want but sooner or later there’ll come a Sunday when you’re pulling the fangs out your throat. When it came to junkies, sketchy wasn’t so much the exception as the rule.

“I can probably find something,” Denny said. His mouth watered. There was a hunger already brewing inside him and that hunger grabbed ahold of his tongue before reason had a chance. “How much you looking to get?”

“What you getting stamps for?”

“Anywhere from fifteen to twenty depending on what he’s got. He’ll usually do a bundle for one fifty, sometimes one twenty-five.” Denny added a little to the front end hoping to carve it off the back.

“What if we got two bundles, think he’d do that for two fifty?”

“All right,” Denny said. His mind was gnawing at the thought of that much dope. He was up to shooting three times a day, and two bundles would last him a week. “You give me the money and I’ll meet you back here in an hour or so.”

“Whoa, now,” Breedlove said. Taking a step back from the car, he raised his hands palms up at his chest like Denny’d just pulled a gun on him. “I ain’t seen you in damn near two years and you want me to hand you three hundred dollars, let you drive off into the sunset? I ain’t saying I don’t trust you, Denny, but I don’t trust you.”

Denny stared at him expressionless and silent, the fellow having no clue of how stupid he sounded.

“How about we’ll hop in here and ride with you.” Breedlove patted the roof of the LeBaron. “I would say we could take mine, but, buddy, we’re already packed in there like Viennas.”

“If you’re riding with me, it’s just you in the car,” Denny said. “I don’t know them boys from Tom, Dick, or Janey, and they ain’t going nowhere with me.”

“What you want me to tell them?”

“You tell them whatever you want,” Denny said. “You can tell them to go in that Shell station and eat Moon Pies for all I care, but if we’re riding it’s just me and you.”

Breedlove looked at the pickup and scratched the crown of his head. He turned back toward Denny nodding fast like he’d just weighed some heavy decision. “Yeah,” he said. “We’ll do that then. Just give me a minute.”

Soon as those words left his lips, Breedlove was on the move. He walked around the back of his truck and opened the driver side door. Something was said and the two boys in the cab looked at Denny with faces equal parts confusion and fuck you. The one with the busted face opened the glove box and handed something across the cab to Breedlove, and Denny saw him shove whatever it was down the back of his britches but he didn’t much care. There wasn’t shit in the car worth taking aside from some Klonopin in the trunk. Besides, his mind was on the future.

Just a few minutes before, Denny didn’t know where the next hit was coming from and now it had landed right square in his lap. He took the last bite of his biscuit, held his hands out the window to brush the crumbs from his fingers, then smeared the grease down his pant legs and started the car. There was no way of knowing what would come of tomorrow. But if the world was ending, at least it wouldn’t be tonight.

From When These Mountains Burn by David Joy. Used with the permission of the publisher, PUBLISHER. Copyright © 2020 by David Joy.

8 Children’s Mystery Novels That Are Enjoyable for All Ages 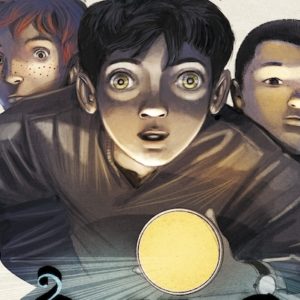 8 Children’s Mystery Novels That Are Enjoyable for All Ages In his dedication in The Lion, The Witch, and the Wardrobe, C.S. Lewis penned this note to Lucy Barfield, his goddaughter....
© LitHub
Back to top