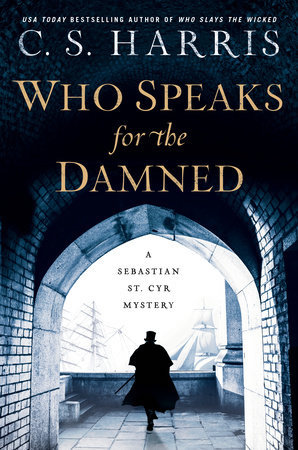 The following is an exclusive excerpt from Who Speaks for the Damned, by C.S. Harris. When a banished British nobleman long thought to be dead is found murdered at a royal celebration in 1814, it’s up to Sebastian St. Cyr, Viscount Devlin, to figure out why. And who is the mysterious child who vanishes shortly after the body is found? Why has the exiled man returned to London, at all? It's thought that if he came back, it would be to kill someone. Did that someone get to him first?

“Dead bodies in my gardens?” muttered Irvine Pennington, sweating heavily as he led the way along a central allée of pleached hornbeam under‑planted with low‑clipped hedges of boxwood and waves of purple allium. “It’s an insult, it is, even to suggest such a thing. An insult!”

The owner‑manager of Pennington’s Tea Gardens was a short, stout man in his middle years, with heavy jowls, a long upper lip, and bushy side‑whiskers. They’d arrived in Somer’s Town to find that the tea gardens closed early on Thursdays. Pennington had resisted Sebastian’s request that he reopen the gardens for them and scoffed loudly at the idea that one of his patrons might be lying dead somewhere within. But at the magical words “Bow Street,” the garden owner’s opposition evaporated. Leaving one of his lads at the gate to await the magistrate and constables, he insisted on personally accompanying Sebastian.

“So, where is this mythical corpse?” Pennington grumbled, holding his horn lantern high. “Hmmm? You tell me that.”

Sebastian glanced at Calhoun, who said, “According to Ji, he’s lying somewhere to the west of the pond, near a brick wall.” They’d hoped to find Ji waiting for them at the tea gardens, but they’d yet to see any sign of the child.

“Just up ahead. But it’s nonsense to suggest—”

Without waiting for Mr. Pennington, Sebastian veered onto a narrow path that wound through a shrubbery toward the high wall that separated the gardens from the hayfields to the west.

Mr. Pennington hesitated a moment, then charged after them, his lantern held high. “Wait, wait!” Pennington shouted. “How can you even see where you’re going?”

“I have good eyesight.”

“But it’s too dark! What a fool’s errand this all is. Your lad probably saw someone who’d simply lain down and dozed off after drinking too much ale. Havey‑cavey it is, accusing me of leaving corpses littered about my gardens. Why, I’ve a mind to—”

The man lay facedown in a small clearing just off the path, his head turned to one side, his widely staring eyes already beginning to flatten and film. His clothes and boots were of a similar quality to those of the missing boy, respectable but neither fashionable nor expensive. The back of his coat was dark and shiny with the blood that had spilled out around the sickle buried deep between his shoulder blades.

Pennington gave a gasp and stumbled to a halt, his lantern swinging wildly. “The Lord preserve us.”

“Grab that lantern before he drops it and starts a fire,” Sebastian told Calhoun.

Calhoun lifted the lantern from the garden owner’s unresisting grasp and brought the light closer. “Is he dead?”

“Very,” said Sebastian, hunkering down beside the body.

Nicholas Hayes—if this was indeed Hayes—couldn’t have been more than thirty‑eight or thirty‑nine, not too many years older than Sebastian himself. But life had been hard on this earl’s son. His once‑dark hair was thickly laced with gray, his complexion weathered by years of hard labor beneath the blazing hot sun of New South Wales. Born with all the advantages of wealth and lineage, he should have lived a comfortable, dignified, even productive life. Instead he’d endured nearly two decades of unimaginable horrors that ended in . . . this. Sebastian felt the tragedy of the man’s wasted life and senseless death press down on him like a heavy weight of sadness mingled, he knew, with an unsettling realization of just how easily this man’s miserable life could have been his.

“Is it Hayes?” he asked his valet.

Calhoun crouched down beside him, the lantern dancing a macabre pattern of shadow and light across the still, alabaster flesh of the dead man’s face. “Dear God. It is.”

Sebastian glanced over at him. “Not simply the man you saw recently, but the man you knew eighteen years ago?”

Why would a man so easily recognizable return to England? Why come back and risk near‑certain death?

Sebastian brought his gaze back to the body before them. He’d been a handsome man, Nicholas Hayes, tall and leanly built, with a long, straight nose, straight dark brows, and high cheekbones. Why would a man so easily recognizable return to England? Why come back and risk near‑certain death?

Sebastian looked at the tea gardens’ owner. “Is this sickle one of yours?”

Pennington began to back away. “Mine? Oh, surely not. What a thing to ask.”

“It strikes me as a reasonable question.”

“Who would care? Look at him. He’s—what? A shopkeeper, perhaps? A cobbler or maybe a—”

“As it happens, he’s the youngest son of the late Earl of Seaforth.” “The Earl of—” A succession of emotions flickered across the garden

owner’s face as shock gave way to wonderment, followed almost immediately by a gleam of hopeful avarice. “Really? Well, well, well. Perhaps this won’t ruin me after all. I could make the site into a special attraction. Yes, that might work. I could even fence off the area and charge a separate admission. I wonder if they’ll let me have the dead man’s clothes. I could have them stuffed and restage the murder scene. I could even—”

“Why, you sick, greedy bastard,” swore Calhoun, surging to his feet. “The man is dead, and all you can think about is—”

Sebastian just managed to snag his normally mild‑mannered valet’s arm and haul him back. “Calhoun,” he said softly.

Mr. Irvine Pennington threw up both hands and scuttled around behind the linden tree as if using the trunk as a shield. “Merciful heavens.”

“May I suggest you await the arrival of Bow Street at the entrance gate? That way you can direct them where to go when they arrive.”

“Yes, yes, I’ll do that. I’ll do that right away.” He hesitated, then added timidly, “May I have the lantern back, please?”

Sebastian waited until the garden owner trotted off, the lantern light swinging wildly over the darkened shrubbery. Then he let the valet go.

“I beg your pardon, my lord,” said Calhoun, smoothing the tumbled hair from his forehead and repositioning his hat with unsteady hands. “That was unforgivable of me.”

“Yet understandable.” Sebastian brought his attention back to the dead man at their feet. “I suspect Bow Street won’t take kindly to the realization that you knew Hayes was an escaped convict and yet failed to report him to the authorities. We need to come up with a convincing story to tell Sir Henry. Quickly.”

Cluster the Pieces: A Mother’s Killer, Found Through the Power of Language and Grief 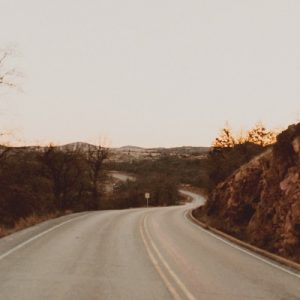 Cluster the Pieces: A Mother’s Killer, Found Through the Power of Language and Grief There’s a story I don’t know how to tell. My friend says, Grief keeps you reaching back. She tells me to look for the pieces....
© LitHub
Back to top