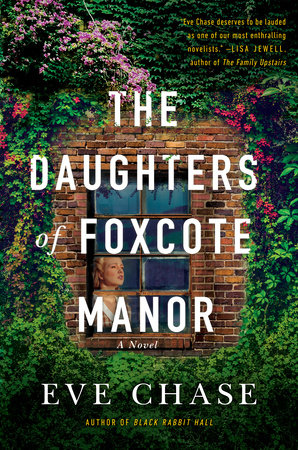 The following is an exclusive excerpt from The Daughters of Foxcote Manor, by Eve Chase. The Harrington family has experienced enough sorrow by the time their London mansion catches fire. Relocating to Foxcote Manor in the country seems like a perfect plan to recuperate, but then a baby is found in the woods. And so is a body.

The forest looks like it’ll eat them alive, thinks Rita. The light’s gone a weird green and branches are thrashing against the car’s windows. She tightens her grip on the steering wheel. The lane narrows further. Wondering if she’s missed the turning to the house or if it’s around the next corner, she takes a bend too fast, then slams her foot on the brake.

Rita sucks in her breath, her eyes widening behind the Morris Minor’s insect-spattered windscreen. She’s not sure what she was expecting. Something smarter. More Harrington. Not this.

Behind a tall, rusting gate, Foxcote Manor erupts from the undergrowth, as if a geological heave has lifted it from the woodland floor. The mullioned windows on the old house, a wrecked beauty, blink drunkenly in the stippled evening sunlight. Colossal trees overhang a sweep of red-tiled roof that sags in the middle, like a snapped spine, so the chimneys tilt at odd angles. Ivy suckers up the timber and brick-gabled façade, dense, bristling, alive with dozens of tiny darting birds, a billowing veil of bees. It’s as far from the Harringtons’ elegant London townhouse as Rita could possibly imagine.

For a moment no one in the car speaks. Unseen, in the trees, a woodpecker drums its territorial tattoo. Sweat trickles down the back of Rita’s left knee. Only now does she register her hands are shaking.

Although she’s done her best to disguise it from Jeannie and the children, she’s been panicky ever since they turned onto the forest road, almost five hours after leaving London. It’s not just the worry she’ll kill her precious passengers. Every so often her vision has actually shuddered, disoriented by all the soaring trees, the lack of sky, and the knowledge of quite how hard a tree trunk is when hit at fifty miles an hour. Now they’ve survived the journey, she covers her mouth with her hand. Everything’s still going too fast. How on earth has she ended up here? A forest. Of all places. She hates forests.

It was meant to be a London nannying job.

Fourteen months ago, Rita had never been to London. But she’d dreamed of it longingly, the Rita she might be there, far away from Torquay, everything that had happened. And the metropolitan family—just like the Darlings in Peter Pan—who’d embrace her as their own. They’d live in a tall warm house that didn’t have a coin-gobbling electricity meter, like Nan’s bungalow did. She’d get a bedroom of her own, with a desk and a shelf, perhaps a view of the churning, thrilling city. And the mother she worked for would be . . . well, perfect. Someone delicate and kind and soft. Cultured. With tiny earlobes and fluttery birdlike hands. Like her own mother, whom Rita hazily remembered. Everything she’d lost in the accident. And that a bit of her kept searching for.

On the morning of the interview, she’d gazed up at the Primrose Hill house’s sugar-white stucco and cascading wisteria, and immediately known this was it. Her new home. Her new family. She could feel a tingling sensation, like the first fizz of pins and needles, as she’d knocked on the smart front door, her heart scudding beneath her best blouse that didn’t look best in London. Now it’s her second-best blouse, packed in the boot along with any other clothes—practical, plain, rarely long enough in the arm or leg—she could salvage after the fire that tore through that London house last weekend. Even after the long cycle at the launderette, her clothes still whiff of that smoke.

Rita glances across at Jeannie in the passenger seat. Wearing a new haul from Harrods, she is defiantly dressed for London, clutching a black patent handbag as if for dear life. She looks fragile, upset. Her recent weight loss is painfully obvious in that cream crepe skirt, tightly belted, another hole in, a powder-blue cashmere twinset, and a white silk scarf, wound like a bandage around her stemlike neck. And she’s wearing those sunglasses again, the tortoiseshell ones, with lenses big as Hartley’s jam-jar lids, she always puts on after a night of crying.

Jeannie hadn’t wanted to leave Claridge’s. (Rita neither: she’d never stayed anywhere she hadn’t had to make her own bed before. The maid wouldn’t even let her help with the tricky mattress corners.) Jeannie certainly hadn’t wanted to come here: “Monstrous place. Walter’s way of isolating me,” she’d whispered last night, out of the children’s earshot. Peering up at Foxcote Manor now, Rita can’t help but wonder if Jeannie was right.

When she’d started the job, everything was different. She remembers Jeannie reading her reference out loud on the day of the interview, her slowly spreading smile, her hands stroking the sun of her heavily pregnant belly. “‘Loyal, kind, and adored by my four children. Brilliant with the baby. Not so good on laundry or cooking. Very nervous driver. Would hire again in a heartbeat.’”

Walter hadn’t been particularly interested. A reserved man with a carefully curated mustache, sinewy in a slim-cut brown suit, he’d been friendly but businesslike. After briskly shaking her hand, he excused himself, blew some kisses in the direction of the kids, and rushed out to work, trailing the faint soapy scent of shaving foam. Back then, Walter was happy to leave all of the domestic decisions to his wife. He ran the Harrington Glass headquarters in Mayfair, not the family house. And he seemed perfectly nice. If there had been warning signs, Rita didn’t spot them.

She’d never wanted a job so much. Carefully lowering herself to the sofa, she’d laced her hands together tightly, so they couldn’t fidget, and crossed her untidy legs at the ankle, tucking them in, as Nan had instructed (“It’ll make you look smaller, love. More feminine”). She tried very hard not to smile too much, to appear a serious professional, older than her twenty years. Worthy of such a plum post.

Jeannie had called the then-five-year-old Teddy into the drawing room. “He’s delicious,” she said. And he was. Rita had to fight the urge to ruffle his curls. Then-twelve-year-old Hera appeared, less obviously delicious and, as if to compensate for this, offering a slice of cake—Jeannie called it pâtisserie—on a bone-china plate with a minuscule silver fork. As Hera shyly explained how to pronounce her posh name—“Here-rah”—Rita took the plate. It tipped and the cake, in horrifying slow motion, slid off and landed in the deep-pile carpet next to the potted aspidistra. Hera giggled. Rita caught her eye, then disastrously giggled, too, and tried to disguise it as a coughing fit. Obviously she’d blown it spectacularly and would be sent packing back to Nan’s bungalow, cloying small-town life—and her own ugly secret. But that giggle, Jeannie told her afterward, had won her the job. She wanted the baby to have a fun young nanny, not some cross old boot.

But the baby never heard Rita’s giggle. Or anyone else’s. She’s a tiny ghost doll, stiff, white, frozen in time, a presence constantly felt but never, God forbid, mentioned. And Rita . . . well, what is she now? Not just the fun young nanny. And she’s got more than what they’ll eat for tea weighing on her mind.

Even the trees seem to peer down at her accusingly, shaking their leafy heads. “Our little arrangement,” Walter calls it. When he suggested it two days ago, Rita didn’t want any part. She felt such disquiet about his motives. “You want to think about it?” He’d snorted. “This is a job, not a dessert menu, Rita.” The choice was stark: agree or leave (“immediately, without a reference”), and he’d hire someone more compliant.

“I have to remain in London, what with the business, so you must make notes on my wife’s state of mind.” Walter smoothed his rapidly retreating hair. “Keep me informed of her moods. Appetite. Quality of mothering. I’ll expect your absolute discretion, of course. My wife mustn’t find out.”

Rita’s mind had raced. First, if she left, where would she go? How would she live? Nan had died a few months earlier—not a bad case of indigestion, after all—and the council had reclaimed her bungalow. She had been determined to give Nan a proper send-off and a gravestone. The cost had wiped out her savings.

And she couldn’t bear the thought of walking away from Jeannie, Hera, and Teddy when they needed her most. It’d be like giving up on them. Or saying,” I can’t help you anymore,” even though she’s sure she can—she knows about grief, the way it scars you, not on the skin but on the soft suede of the soul inside. (And how it is to grow up different, like Hera, the one who doesn’t fit.) So yes, surely better she “report” on Jeannie this summer, fudging whenever necessary, than some strict new hire, she reasoned. Even this morning it felt like the right decision. But now that they’re here, enclosed by these somber, looming trees, in a spot so remote it feels like they’re the last survivors on the planet, she’s no longer sure. Her mouth is dry and metallic. It tastes of betrayal.

“Rita?” Jeannie touches her lightly on the arm, interrupting her spiraling thoughts. Jeannie’s voice is thick with the morning’s medication, the reason Rita is driving. (“Funny, I see halos,” Jeannie observed over Claridge’s flawless poached eggs at breakfast.) “Are you ready?”

“Well, let’s get this bloody awful thing over with, shall we?” Jeannie whispers grimly. Rita nods and grapples with the gearshift. Forcing a smile for the children, Jeannie says in a loud, bright voice, “Well, hello, Foxcote! This is exciting. Come on, Big Rita. Drive in.”

From The Daughters of Foxcote Manor by Eve Chase. Used with the permission of the publisher, Putnam. Copyright © 2020 by Eve Chase. 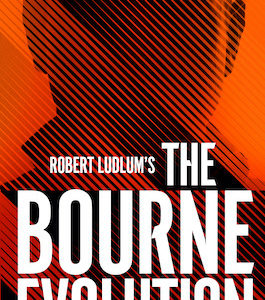 Robert Ludlum's The Bourne Evolution Jason didn’t know if he was remembering or dreaming. Bits and pieces of a life buzzed through his head like the clickety-clack...
© LitHub
Back to top