A good book makes the best companion for international travel.

I travelled in the backpacker mode for the first time at the age of twenty, when I left my study-abroad program in China and flew to Thailand. At a used bookstore on the Khao San road, a fellow customer handed me a worn paperback copy of Siddhartha. He told me that I was going to love it, and he was right.

When I travel, I leave the deep grooves of my routines, and so my mind becomes fertile and expansive. I pull up my anchor; I taste unfamiliar flavors; I linger in liminal space. I become especially susceptible to good stories. I have more unassigned brain energy floating around. I can imagine. I can delve.

We read on planes, on buses, on strange beds for five minutes before drifting into strange dreams. Or we find the right chaise lounge and devour something whole. A crime novel with an engaging plot is the perfect travel companion; I wouldn’t pack Finnegan’s Wake. And a story set in a foreign locale is Goldilocks reading material for a trip. Here we find the attention to ambient detail, the romantic atmosphere, and the sense of adventure that inevitably bleeds into to our own journey. We’re awakened to the stories that surround us. We inhale more, we peer into the shadows. We formulate suspicions of the sulky concierge, the obsequious driver, the mismatched, taciturn couple from the Twin Cities. What are they hiding? Are they on the run? Are we?

These eight stories of far-flung adventure are perfect companions for plane, beach, or café. Enjoy one between sips of local wine. Bookmark one with a receipt in handwritten Cyrillic. Or skip the bookmark and finish one overnight, by headlamp in your tent, or by lamplight in crisp hotel sheets, secure in the knowledge that only more rest and recreation awaits you at the dawn. 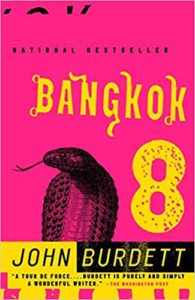 The first novel in John Burdett’s marvelous Royal Thai Detective series introduces an unforgettable narrator: Sonchai Jitpleecheep, the half-white, half-Thai detective and devout Buddhist, both irreverent and incorruptible. The plot hits all the right notes, but the distinctive feature of Bangkok 8 is the textured exploration of the culture. Sonchai’s second-person address (“We do not look on death the way you do, farang”) offers the reader a charming and authentic Thai perspective. And Burdett’s nuanced and respectful portrayal of prostitution in Thailand kept my gears turning long after I’d finished this story. 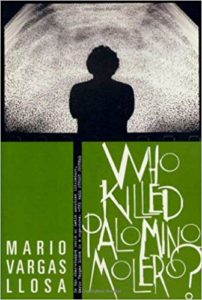 This short novel is a minor masterpiece by the legendary Peruvian intellectual Mario Vargas Llosa. The gruesome murder of a soldier on an army base in a rural area of Peru sets the stage for this perfectly tuned yarn. Llosa follows genre conventions to a T, even adopting the “Doctor Watson” perspective of the detective’s assistant. However, the humor of the writing, the clever subversion of machismo culture, and the exquisite ambiguity of the plot’s conclusion reveal the author’s absolute control of his material. 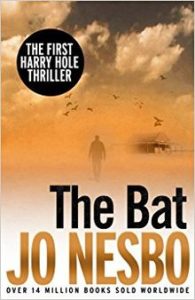 The Bat, by Jo Nesbo

Jo Nesbo has earned his reputation as a flagbearer of Nordic Noir, and his Harry Hole series has reached an astounding number of readers. It all began with The Bat, which finds Harry dispatched to Sydney to investigate the rape and murder of a Norwegian woman. This book has an edge-of-your-seat plot with surprises and action galore, but what stuck with me was the light touch that Nesbo uses to introduce elements of Australian aboriginal mythology. The author weaves these myths into the narration in a way that effectively enriches and deepens the story. 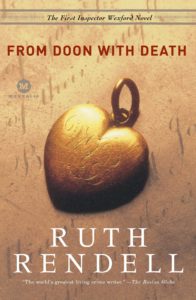 From Doon to Death, by Ruth Rendell

Ruth Rendell’s classic debut introduced readers to the mild-mannered Inspector Reginald Wexford, who went on to star in twenty-three more novels and become one of the most iconic detectives to ever grace the genre. The Inspector Wexford mysteries take place in the fictional village of Kingsmarkham, where psychological intrigue underlies the benign façade of the English countryside. In From Doon to Death, Rendell adheres to the conventions of the detective novel, including red herrings, subtle clues, and a stunning reveal. At the same time, she tackles issues of class and sexuality in a way that was especially daring at the time of the novel’s publication in 1964. For me, it is the delightful prose and the respect for the intelligence of the reader that make the Inspector Wexford books one of the greatest detective series of all time. 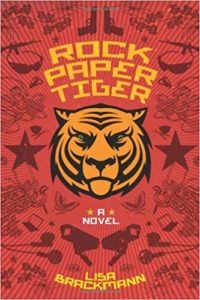 Few writers have captured the stranger-than-fiction juxtapositions that one encounters in twenty-first century China as well as Lisa Brackmann. Her memorably badass and flawed heroine, Ellie Cooper, finds herself in a downward spiral in Beijing after witnessing nightmarish atrocities as a National Guard medic stationed in Iraq. Like so many fictional detectives, she finds succor by throwing herself into a quest to help another: in this case, a Chinese artist friend who has disappeared. This journey takes her from the glitzy Chinese capital to the less developed corners of the country, and Brackmann describes all of it with a sharp eye for detail that brings contemporary China to life. 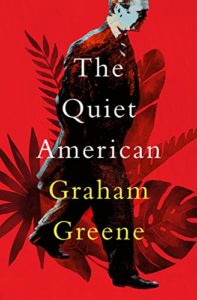 The Quiet American, by Graham Greene

If you haven’t read Graham Greene’s The Quiet American, put down what you’re doing and get thee to a bookstore. The story, set in Saigon, centers on a love triangle between a world-weary English journalist named Thomas Fowler, a Vietnamese woman of great beauty and practicality named Phuong, and an earnest, ardent CIA operative: Thomas Pyle, the quiet American. Pyle’s disappearance in the opening pages sets the stage for Fowler’s unfolding of the plot, which shuttles between past and present. The prescience of this novel with regard to the subsequent war in Vietnam is astounding. But it is the rich intrigue, the latent wisdom, the concisely exquisite language, and the note-perfect invocation of Vietnam that makes The Quiet American one of the most well executed thrillers ever written. 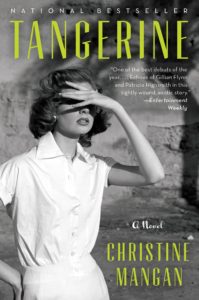 This psychological thriller sold big last year as readers lapped up a chance to explore 1950s Tangier through the eyes of two young women, Lucy and Alice, who narrate alternating chapters. Fragile Alice and saucy Lucy, former college roommates, bring completely different approaches to the foreign city: while Alice avoids the heat, the sand, and the unknown, Lucy dives in headfirst, savoring new experiences as she makes new—and dangerous—friends. This pair of unreliable narrators kept me guessing until the last pages of this homage to the exotic thrillers of Patricia Highsmith and Daphne du Maurier. 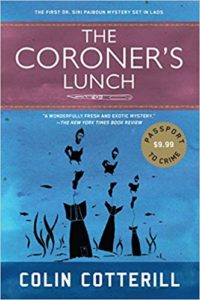 The Coroner’s Lunch, by Colin Cotterill

Siri Paiboun, a septuagenarian coroner, is our guide through this delightful mystery by Colin Cotterill. The story is set in Laos in 1976: a year after the conclusion of that country’s civil war. The window into a landlocked and oft-overlooked nation is reason enough to pick up this novel, and Cotterill makes it worth our while with an expertly woven tale of conspiracy that kicks off with the sudden death of a Communist Party leader’s wife and the mysterious murders of three Vietnamese soldiers. Siri is a warm companion, filled with wisdom and sardonic wit, and his community of friends and neighbors feels three-dimensional and real. The result is both a remarkable journey into unexplored territory and a decidedly satisfying crime thriller that will keep you turning the pages, regardless of your time zone.

Daniel Nieh is a Chinese-English translator and professional model. He lives in Portland, Oregon. His debut novel is Beijing Payback. 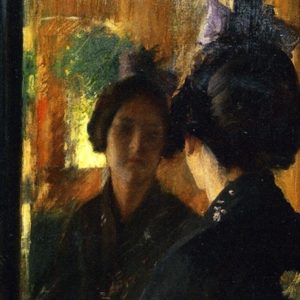 No matter how chilling, twisted, or gruesome a story, we are drawn to crime novels because there is something, however big or small,...
© LitHub
Back to top