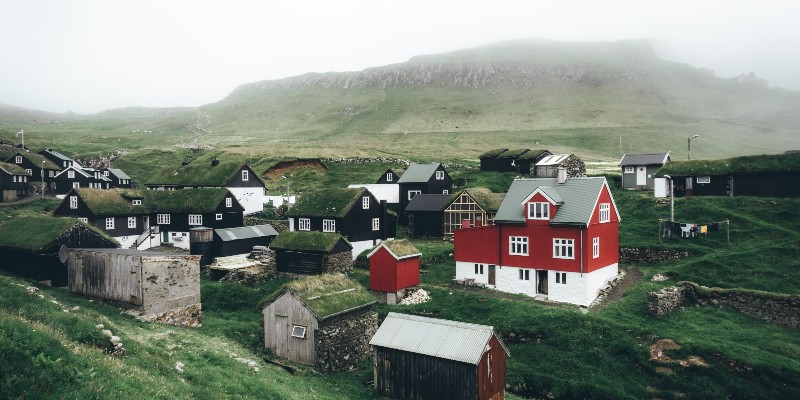 Sometimes this whole “city” thing can really get you down. So many people, so much noise, dirt, traffic. You need a break from the urban. Somewhere remote, quiet, maybe even lonely. I’m thinking perhaps, the Faroe Islands. Eighteen islands form the archipelago of the Faroes. Two hundred miles north of Scotland, about halfway between Norway and Iceland, technically a ‘constituent country’ of the Kingdom of Denmark, and with a population of just over 50,000 hardy folk speaking Faroese, which is apparently impenetrable even to their neighbouring Danes. The best descriptors for the islands are rugged, windy, wet, cloudy, and surrounded by whales. You’re a long way up north so it’s perpetual light in the summer and short winter days. And, even though the Faroes have arguably the lowest crime rate in the world, it is producing a growing number of crime novels…invariably involving whales it seems…

Scottish author John Buchan (he of The Thirty–Nine Steps in 1915) wrote The Island of Sheep in 1936 (often called The Man from the Norlands in America for some long lost reason). It’s a typical Buchan novel full of upper class adventure and daring-do ranging from England and Scotland to Buchan’s fictional Island of Sheep (specifically based on the Faroes) where a villain is holed up aboard a Danish trawler with his multinational criminal gang for company. Naturally, their nefarious intentions are foiled by our hero, Buchan’s regular main character Richard Hannay in his last major fictional outing.

Still, Buchan was writing about the Faroes nearly a century ago now. Today think Faroe Island crime novels and the name you need to know is local writer and professor of Faroese literature at the University of Copenhagen, Jógvan Isaksen. Isaksen has managed to write eighteen crime novels based in his homeland despite admitting that it’s such a safe place people don’t even lock their doors at night. There’s been four murders in the last thirty years, the local jail has no bars on the windows, and most arguments are about sheep in one way or another. But, as Isaksen has commented in interviews, you’ve got to find something to do on those long, long, light nights. Might as well write a mystery novel or a couple dozen.

Unfortunately, hardly any of Jógvan Isaksen’s books have been translated into English to date, but you can sample his delights with Walpurgis Tide (2016). Two British environmental activists are discovered dead amongst the whale corpses after a whale-kill in Tórshavn (the ridiculously charming capital of the Faroe Islands containing about 13,000 people that is really not much more than a cluster of wooden turf-roofed houses on a small peninsula). Detective Hannis Martinsson investigates. Faroese whale hunters, angry at persistent interference in their traditional hunts and the anti-whaling protesters, are the main suspects. As Martinsson uncovers more information the town of Tórshavn itself is threatened.

If you read German or Danish there’s a lot more Isaksen to discover, but not much else in English right now sadly.

Chris Ould is English, but that hasn’t stopped him writing his Faroes Novel Trilogy. In book one, The Blood Strand (2016), Jan Reyna has left his native Faroe Islands to become a British police detective. But he is drawn back when his estranged father is found unconscious, a shotgun by his side and someone else’s blood in his car. DI Jan Reyna and local detective Hjalti Hentze return in The Killing Bay (2017) investigating the murder of a woman that appears linked to the Faores whaling industry. And finally, rounding out the trilogy, The Fire Pit (2018) finds Detective Hjalti Hentze investigating a cold case linked to an old commune on the islands from forty years before while Jan Reyna is investigating his mother’s suicide.

Former Scottish newspaper journalist Craig Robertson has written many crime novels, mostly set in Glasgow. The Last Refuge (2014) sees a character Robertson has written before, John Callum, arriving from Scotland on the desolate Faroe Islands to try and make a new start living in the close-knit community. Then, something that’s rare and not supposed to happen on the Faroe Islands, a murder. A specialist team of detectives arrives from Denmark to help the local police but they are ill-equipped to handle a case this complex.

David Hewson is another English journalist turned crime writer. In 2021 he released Devil’s Fjord, a standalone mystery set on Tjørnuvík in the Faroe Islands. The new District Sheriff, Tristan Haraldsen had thought moving to a remote village on the island of Vagar would be his chance for a peaceful life with his wife Elsebeth. But then two local boys go missing during the village’s annual whale hunt. Haraldsen investigates, but it appears that these are not the first village boys to go missing from Vagar. The picturesque village, it seems, has a darker past that Haraldsen must uncover.

In case you still haven’t got a good picture of the Faroe Islands in your mind’s eye you might want to seek out the recent six-part TV show Trom created by Faroese screenwriter Torfinnur Jákupsson, the first ever Faroese-set TV crime drama series. After a missing animal rights activist is found dead amid a local whale hunt (I did warn you at the start that whales would be a major theme of Faroe Islands crime writing), journalist Hannis Martinsson risks his own skin on the trail of a spectacular story, sending shock waves through the isolated island community. And, naturally, lots of shots of the wild landscape while not forgetting that it rains about three hundred days a year.

And finally, as often with Crime and the City, a curiosity. Arthur Catherall was a twentieth century English author, mostly of works for children – what today would be called YA – set all over the world and often with a nautical theme. He was a keen sailor and spent time on working trawlers up and around Iceland. During those voyages he visited the Faroe Islands and thought he’d like to write about it. The result was The Strange Intruder (1965) set on the small, rocky Faroe Island of Mykines, the westernmost of the eighteen main islands. The story is set on a blustery autumn day. A force ten gale blows up and a damaged ship and crew are in danger of smash-up on the rocks and need rescuing. More of an adventure novel than a straightforward crime novel, it’s a great book if you want to try and interest your pre-teens in a holiday to the Faroes – if the whales, the constant rain and harsh winds don’t swing them that is. 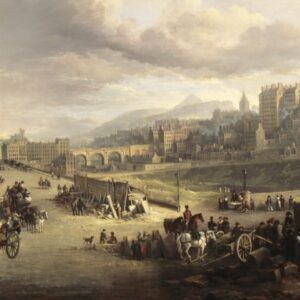 The big three. Or, maybe it’s The Big Three. Either way, it’s impossible to exaggerate their influence on literature...
© LitHub
Back to top