Florida Crime Fiction:
A Guide to the Madness

I get asked a lot about Florida crime fiction. I would assume this is because a) I’m a crime writer and b) I’m a Floridian. But I’m not just any Floridian, I’m a born and bred, going generations back, with the pines and the swamps and the saw palmettos and the water moccasins Floridian. But I’ve spent my share of time on the coast, too. Not among white sands and cabanas and gated resort communities, but in neon-haunted beach dives and on salt-sprayed highways dragging up and down the long length of my home state. Florida is known for being “weird,” for its face-eating headlines and Florida Man antics, for its gators on the golf course. Perhaps because we are a swirling Mecca of hope and escapism—sunshine, beaches, retirement, Disney—we attract the strange and bring out the crazy. In many ways, Florida becomes a haven for the desperate and this trend naturally lends itself to crime writing.

When most people think of Florida crime authors, the first names to pop up are Carl Hiaasen and Tim Dorsey. And it’s no wonder, as between them they span a whopping forty novels, all filled with wacky characters committing bizarre crimes that perfectly explain why Florida has the reputation that it does. These crime novels are timely, often drawing from head-scratching headlines of which there is no shortage in these parts, and hysterical. It’s telling that all of Dorsey’s novels feature Serge Storms, a complete nut job, as a main character. 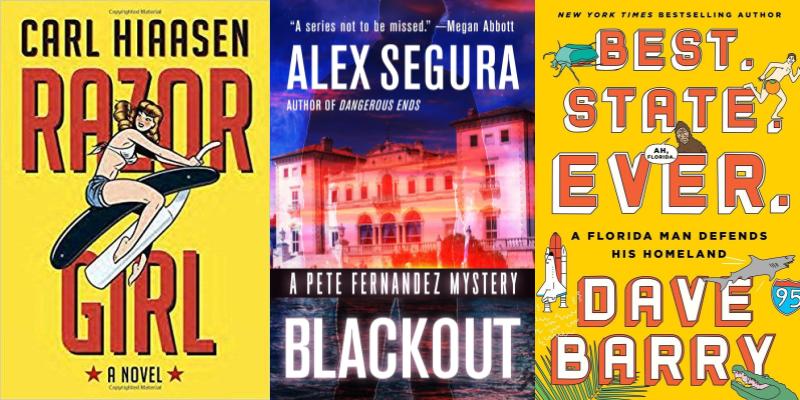 Some of the heavy hitters in the crime fiction and thriller world—Michael Connelly and James Patterson, for example—can consider Florida a stomping ground, but their novels are not Florida-centric and so their place in the Florida crime cannon is questionable. Dave Barry and Randy Wayne White have a firm hand in shaping South Florida crime fiction and, like Hiaasen and Dorsey, their novels are numerous and highly consumable. Ace Atkins’ novels dance from one side of the country to the other, but White Shadow, set in Tampa, is a necessary read for understanding Florida true crime history. Comparative newcomers, but gaining traction fast, Jeffery Hess and Alex Segura are both making a mark on the grittier side of the Florida crime fiction scene.

And where, you might ask, are all the women in the room? I’ve been asking that question myself and plan to address it at later date. To be sure, there are female crime writers hailing from Florida, but where all the female crime writers capturing the true essence of Florida are hiding is a mystery that remains to be solved and a concern that I hope will one day be rectified.

When it comes to my own personal favorite Florida crime writers, it’s a toss-up between Harry Crews, Elmore Leonard, Jim Harrison and Jeff Lindsay. With the exception of Lindsay, these authors aren’t necessarily known for their Florida crime novels and perhaps that’s why they resonate with me. There isn’t so much flash in their novels. There’s more grit than gloss, more darkness than quirky high-jinks and capers. The Florida I see reflected in their work is one whose heartbeat I can understand: one full of low-lifes and second-guessers and men and women making desperate choices on the fringe.

The Florida I see reflected in their work is one whose heartbeat I can understand: one full of low-lifes and second-guessers and men and women making desperate choices on the fringe.

Jeff Lindsay, known for his Miami-set Dexter Morgan series beginning with Darkly Dreaming Dexter, writes about a Florida that is about as far, geographically, from the North Florida of my own upbringing and novels as possible. Dexter, the serial-killer-serial-killer who hides his own psychotic tendencies and resultant murders behind the placid façade of a blood spatter analyst, inhabits a world filled with yachts and high-rises, everything pink and turquoise and vibrant. And while Dexter himself is charming, the novels are dark, riddled with violence and probing questions about good and evil and how a serial killer can slide up and down the scale. Despite being a crime writer, I am not a fan of typical, rote-by-rote mysteries, but Lindsay’s protagonist elicits such as twisted sense of empathy from the reader that his novels are almost irresistible. In reading them, one can go to the edge of morality without completely falling off the side of the cliff and this makes them both fun and dangerous. 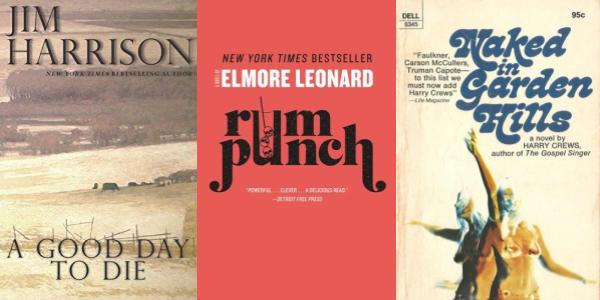 At the other end of the state, and back in more familiar territory for me, lurks the notorious Harry Crews. Although Crews lived and taught in Florida for over thirty years, most of his novels are set, understandably, back in his home state of Georgia. Crews’ novels straddle the Florida-Georgia line in way that few books have ever been able to, however, and he is a master of writing the grotesque, the down-and-out and the going-straight-to-hell. No one writes about the dirty, truly gothic, unflinching, South the way Crews does. From writing about snake handlers to circus freaks to abandoned phosphate mines, Crews embodies all that is disturbing and unsettling about a landscape and a people he clearly knows so well. Ted Geltner recently published a new biography of Crews titled Blood, Bone and Marrow that may be a good place for readers interested in Crews to start, but if you’d rather jump straight into Crews’ Florida, try Naked in Garden Hills. Just don’t say I didn’t warn you.

Veering back from the ledge a few paces is Elmore Leonard, who is never forgotten in crime fiction circles, but is often over-looked when the conversation centers on Florida. Yet Rum Punch, remade as Jackie Brown by Quentin Tarantino, is set in Miami and many of his other well-known novels such as Get Shorty and The Big Bounce dip into Florida along the way. Of course, Leonard has novels set all over the country, from Michigan to Missouri, and many out West, but his Florida novels, Pronto and Riding the Rap, featuring Raylan Givens of Justified fame, are my favorite. Givens, hailing from Kentucky, brings a more Deep South vibe to his Florida escapades that I can certainly appreciate.

Finally, we come to Jim Harrison and A Good Day to Die. Harrison is most well-known for his novels set in Michigan and for his brilliant novella Legends of the Fall, later made into a film. Most readers would not consider him either a Florida author or a crime novelist per se and so it’s understandable why he is so often forgotten. Yet his early novel A Good Day to Die, opening in Key West and detailing a road trip from Florida to the Grand Canyon, was so hugely influential of my own identity as a Florida crime writer, that I would be remiss if I did not include it. A Good Day to Die has an intended crime at its center, though not a mystery, and centers on characters who are reckless, careening through a world that has stepped over and then looked down upon them. It is written in a sparse, literary style, again, somewhat uncommon for a crime novel, but flaunts an edge that all great crime stories have: that line of desperation, that working class tragedy. It defies what readers have come to expect from a Florida crime novel and surprises by showcasing a different side of both the state and the genre. In other words, it’s exactly up my alley. 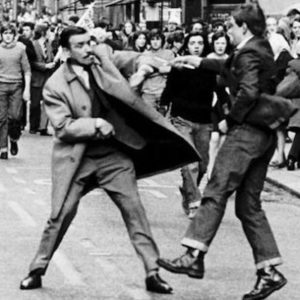 Glasgow has always been misunderstood and mislabeled, a city of contradictions. Most commentators see the (amazing at the time)...
© LitHub
Back to top