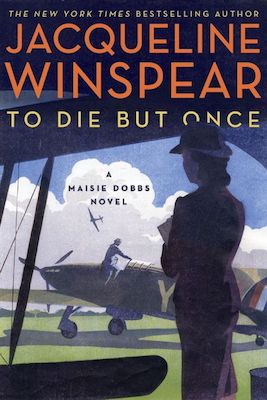 The following is an exclusive excerpt from To Die But Once, the latest novel in Jacqueline Winspear’s Maisie Dobbs series of historical mysteries. Dobbs, a private detective working in England in the early days of WWII, takes on a case that will see her explore the world of wartime contracting, profiteering, and corruption. Winspear is the bestselling author of eighteen novels and a winner of the Agatha Award for Best First Novel, among other honors.

The boy had not had a day without a headache in weeks. How many weeks was it now? And how many aspirin powders had he taken, every night when he arrived back at his digs—a shared room in another lodging house in another town? Another town with airfields close by, and buildings to be painted with that viscous gray emulsion. He wondered about the aspirin and the emulsion as he walked home from the pub, and deep down inside himself, he knew that one had something to do with the other, though his mates on the job hadn’t complained. Not that he’d dare say anything—no, he had to keep his mouth shut, because he was lucky to have a job at all, so there was nothing to whine about. And if truth be told, he should not have been at the pub drinking—but the landlord didn’t mind, probably didn’t even know. After all, the boy had come in with the older lads, and it’s not as if he looked like an apprentice.

He missed his mum. He’d never have mentioned it, not to any of the lads—they teased him enough about being the boy—though he might have said to Freddie Mayes, “Freddie, you would love my mum’s spotted dick pudding.” And he’d describe the way she kneaded the suet dough, how she added handfuls of sultanas, currants and raisins. Then she’d take a large square of clean white cloth, place the round ball of dough in the middle and tie the ends nice and tight. Then it would go into the saucepan of boiling water to steam for hours. Hours, it would be, and the sweet smell would envelop the kitchen. And if the pudding had been put on the heat later in the day, it would be long after supper time that she’d take it out of the saucepan, unknotting the hot wet cloth with her fingertips, then she’d spoon the pudding into bowls and pour a big dollop of Tate & Lyle Golden Syrup onto every helping. If it was a Sunday, she’d make custard. She’d said in a letter that they were having to cut back on sugar, what with the war. But he couldn’t complain, not really—after all, this job was on account of the war, though for the life of him he’d never come across paint like it. He sighed. At first he’d had trouble getting used to the silence in the country. In London, back in the Smoke, you never heard a footstep behind you, because there were footsteps everywhere. There were always people out on the street, and there was more life. Human life, that is. Mind you, if there was a smog, that made the footsteps sound different, as if someone was messing about with the echo, twisting it, like a plumber shaping a length of pipe to get it around a bend in the house. But now he loved being close to the land, and all that green. It was quiet. Peaceful. Well, it was peaceful once he’d done his work for the day, and when he could get over to the farm.

Not long now. Not far to his tiny room in that strange house with the loopy woman, and all them WAAFs on the floor below.

There had been nothing but trouble since he’d come here. Not being in the country trouble, and not work trouble—no, it was people trouble.

According to Freddie, they were moving on to the next job in a couple of days, though this stop had been a good one—lot of work to do, so the crew had stayed longer, had a chance to settle in a bit, get to know a few locals. And there was the overtime. More money to send home. He stopped. Blimey my noddle hurts. He pressed his fingers to his temples, massaging the bluish thin flesh. It wasn’t only the emulsion that was giving him the pain, though he was sure it was doing a fair job of killing off a few brain cells. There had been nothing but trouble since he’d come here. Not being in the country trouble, and not work trouble—no, it was people trouble. He wanted to stay, but because of the other business, he wanted to get going. If he had to stick with this job, like his dad said he should, then he wanted to get on with it. He wanted to move on soon, and soon couldn’t come fast enough, because his heart would break anyway, leaving the old boy. If only he hadn’t . . . but what was it his dad always said? “You can’t look back, son, not in this life. No, you can only look forward and step out in its direction.” And when he’d said, “What direction?” his dad had said, “The future, son. The future—always look to your future.” Well, the future wasn’t turning out to be the one he wanted. Instead the future was the next place, another airfield and this painting job. The past was two days ago and two blokes he would rather not see again, though he knew he would, but for now he wanted to forget it. Forget them. Christ, this head!

The boy walked on along the path by the stream, then across the rickety wooden bridge, down an alley, a shortcut to his landlady’s house. Freddie would wake him later when he came staggering back, in his cups, making more noise because he was trying to be quiet. But the boy knew he’d at least get a bit of shut-eye before he had to pretend to be interested in Freddie bragging about a girl he’d been eyeing up, how they didn’t all go for a man in uniform, so he was in with a chance. Which was just as well, because Freddie wasn’t giving up this job in a hurry—reserved occupations, it was, and he’d said he had no blimmin’ intention of joining the army and going the way of his father, and look what happened to him the last time the country went to war.

Darkness enveloped him, pressed against his chest, filled his mouth, suffocated him, and the future his dad had told him to step out toward ceased to exist.

What was that? The boy turned and looked back, stood for a second, perhaps two. Nothing. Just country sounds. Probably someone’s cat on the prowl. And then the pain again. But this time it was different, this time it was sudden, a deep terrible searing crack across his skull. Nighttime turned to light, turned to lots of light, and he could hear his father telling him to look to the future, but the shock felled him, brought him to his knees, and then another wave of pain across his head again, taking him down, grinding his cheek into the path’s loose gravel. He reached up with his fingers—shaking fingers, fingers he could not seem to steer—and he touched his head and brought back his hand wet. Wet with his own blood. He felt tears begin to stream from his eyes. Oh he missed his mum. He missed his dad and in that moment he even missed London. Then there was nothing more to think, no other thoughts crossed the boy’s mind and time felt so slow, so very slow, though he could hear voices. Long, drawn-out voices. One seemed familiar and he struggled to find the word, the right word to call out to that person, but the word that was the person’s name just would not come and he did not know if it was a man or a woman. And as he felt his body being lifted, the streetlight ahead grew faint, and at once he knew his breath was shallow, and then more shallow, and his heartbeat was slowing down, as if an engine inside him had been deprived of fuel.

It was as if someone had reached out and snuffed out a candle.

Just like that, finger and thumb around the flame as he made one last attempt to form the words that would not come. Darkness enveloped him, pressed against his chest, filled his mouth, suffocated him, and the future his dad had told him to step out toward ceased to exist.

From To Die But Once. Used with the permission of the publisher, Harper. Copyright © 2018 by Jacqueline Winspear.

Florida Crime Fiction:
A Guide to the Madness

Jonathan Kellerman and the Dark Psychology of Crime 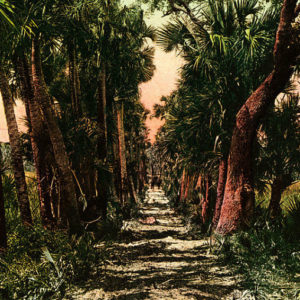 Florida Crime Fiction:
A Guide to the Madness I get asked a lot about Florida crime fiction. I would assume this is because a) I’m a crime writer and b) I’m a Floridian....
© LitHub
Back to top