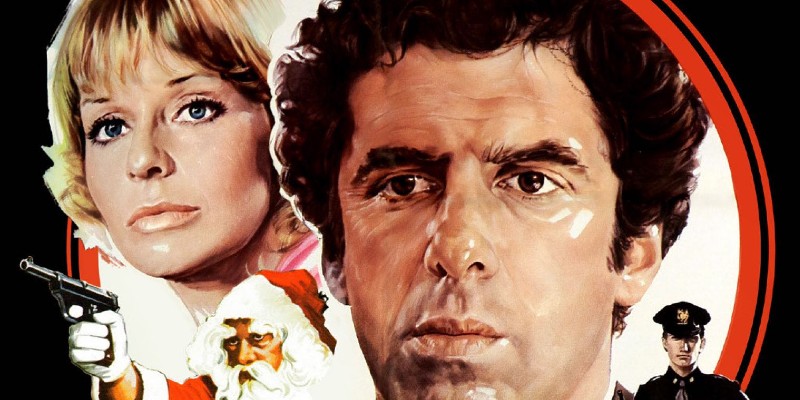 The 1970s neo-noir Christmas heist film you need this year.

Look, far be it from me to begrudge anyone their enjoyment of as great a movie as Die Hard or seek to deny its status within the canon of Yuletide cinema, but at this juncture, in the year of our Lord 2019 and with the new decade upon us, performative declarations of that film as some kind of underappreciated or even secret holiday classic are as played out as…well, as the Die Hard franchise itself. (If you don’t believe me, just look at who’s still ringing that bell.)

The refrain is especially tiresome in light of the fact there’s a whole host of equally great, but far lesser seen, action and crime thrillers that take place on or around Christmas just waiting to be discovered—foremost amongst them, the 1978 neo-noir masterpiece The Silent Partner.

Directed by Daryl Duke, The Silent Partner is the second adaptation of Danish author Anders Boldelsen’s 1969 novel Think of a Number (Tænk på et tal). In it, mild-mannered Toronto bank teller Miles Cullen (Eliot Gould) accidentally uncovers a plot hatched by one Harry Reikle (Christopher Plummer), a career criminal disguised as a mall Santa Clause, to rob his place of work. Rather than alert the authorities, Miles stages a daring bait-and-switch on both Reikle and the bank, pocketing a cool $48 grand and walking away scot free—that is, until Reikle, well aware he’s been chiseled out of a small fortune, comes around to collect. Thus begins a harrowing battle of attrition between two desperate thieves leading to a final bloody showdown at the place where it all started.

Taking full advantage of Canada’s Capital Cost Allowance incentive, which allowed film productions to act as tax shelters for investors, The Silent Partner is one of very best Canuxploitation movies, a designation it shares with fellow Noel nightmares Black Christmas (1974) and Rabid (1977). Unlike those genre favorites, it actually went on to enjoy mainstream acclaim in its home country, earning eleven Etrog nominations (the Canadian equivalent of the Oscars) and winning six, including Best Picture, Best Director and Best Music. Stateside, the film didn’t see quite the same success, although it did receive overwhelmingly positive reviews from American critics (Roger Ebert hailed it as “worthy of Hitchcock.”). Since its initial release, The Silent Partner has attained the status of cult classic, although it remains woefully under-seen.

It’s hard to imagine anyone with an interest in crime and suspense won’t be immediately won over by The Silent Partner. On a pure craft level, it’s as good a thriller as has ever been made: Duke’s clean and precise direction, combined with cinematographer Billy William’s moody lighting and a killer score from legendary jazz pianist and composer Oscar Peterson give the picture the sheen of prestige, even as the muscular script from the late, great Curtis Hanson remains admirably free of pretension.

Die Hard is often held up in screenwriting classes and tutorials as an example of sterling structure, and rightfully so. But I submit that The Silent Partner’s script is equally as good, if not better. Not to take any credit away from Duke, but it’s no surprise that Hanson’s name usually comes up first in discussion of the film. Hanson had actually tried to negotiate his way into the director’s chair for The Silent Partner, and although he was unsuccessful, he did cut his teeth overseeing the final version of the film during post-production. Hanson would eventually move into directing, establishing himself as one of the great journeyman filmmakers of modern times. Many of the qualities that make The Silent Partner so great—its propulsive tone, real feel for character and setting, and a perfect balance between brutality and romance—can likewise be found in Hanson’s career defining work of 20 years later, the masterful James Ellroy adaptation L.A. Confidential (which, appropriately, also involves some violent Christmastime shenanigans).

Along with the script, The Silent Partner’s greatest asset is its cast. The naturalistic Gould—who, between this and his starring role in Robert Altman’s revisionist Raymond Chandler adaptation The Long Goodbye from 5 years earlier, might well be the face of Seventies’ noir—is ideally suited to play both the wily criminal mastermind as well as a slightly awkward everyman who people consistently underestimate.

(It wouldn’t surprise me if Breaking Bad creator Vince Gilligan used the character as an inspiration for Walter White. In fact, his recent El Camino: A Breaking Bad Movie contains a noticeably similar set piece involving the removal of a body from a walk-up apartment unit.)

Plummer, meanwhile, makes for Gould’s perfect foil, playing a creature of pure, unbridled malevolence and simmering rage whose demonic visage and serpentine body language announce him as an immediate and unmistakable threat. Reikle is one of the all-time great sadists of film noir, up there with Tommy Udo in Kiss of Death, Ramrod in Vice Squad, and Anton Chigurh in No Country for Old Men (which, given some of its crossover in plot, would make for a great double feature with The Silent Partner). 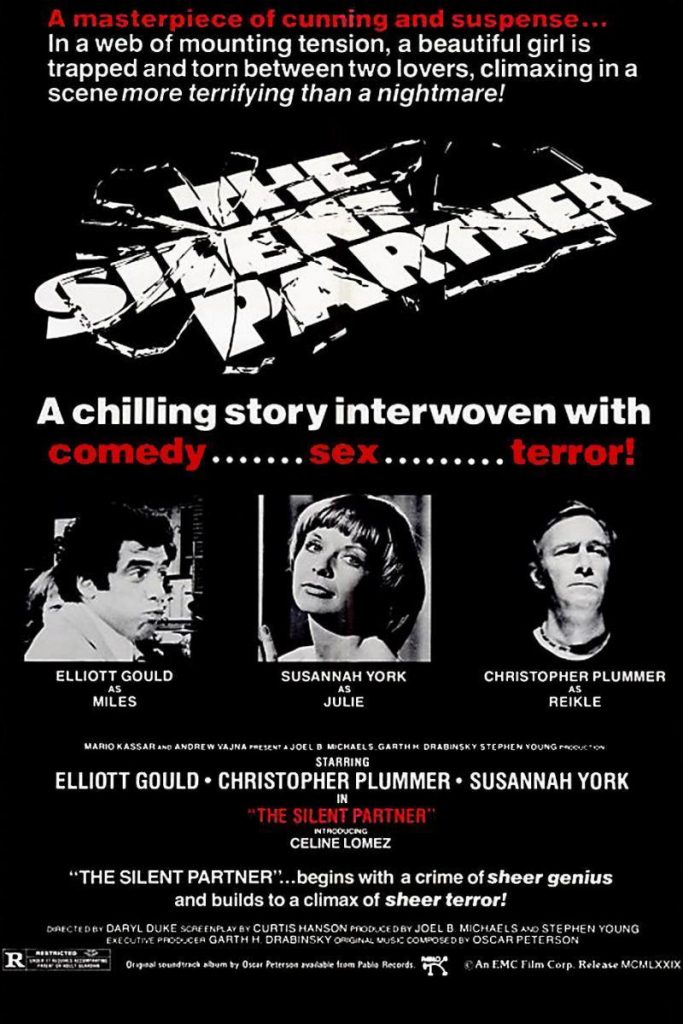 Gould and Plummer are supported by the surprisingly deep ensemble cast, key amongst them Susanna York and Celine Lomez. Both women bring a keen intelligence to their roles, elevating what in most films would be token romantic interests into real people (though some of the credit must also go to Hanson’s for writing such strong characters). The same can be said for the rest of the cast (including a very young John Candy), who fill out the universe of the film and give it a real lived-in quality. It’s this expert world-building that allows to oscillate between disparate tones without giving the viewer whiplash. While it wouldn’t be accurate to call The Silent Partner an erotic thriller, it is sexier than a lot of films that boast that designation. Similarly, it often plays as a legitimately funny workplace comedy, one in which you’re more than happy to break from the main plot to watch minor characters deal with their small personal dramas. In a rare case of honest advertising, the movie’s original poster was telling the truth with its promise of “A Chilling story interwoven with…comedy…sex…terror!”

It’s the film’s penchant for terror that really puts it in a league of its own. Ebert was on the money with his Hitchcock comparison and The Silent Partner shares much in common with one Hitch film in particular: his deliriously twisted adaptation of Patricia Highsmith’s Strangers on a Train. Highsmith may be an even better touchpoint than Hitchcock. Like any number of her stories—Strangers on a Train, Ripley’s Game, and Those Who Walk Away—The Silent Partner revolves around two obsessive men locked in a death struggle. It likewise contains traces of the homoerotic tension so central to her work, with Gould and Plummer constantly trying to out “fuck,” figuratively and literally, one another. Unlike the antagonist of Strangers on a Train, Reikle isn’t necessarily coded as gay—in fact, it’s made very clear that he is a heterosexual misogynist of the lowest order—but Plummer does imbue him with a noticeable femininity (foremost among them the application of mascara to highlight his deathly blue eyes before eventually donning drag during the climax. In a different film, this might play out as camp, but Duke’s masterful handling of tone keeps it firmly grounded.

Finally, The Silent Partner is a great Christmas movie (even if only the first half is set during the season), subtly capturing the melancholy of the season, as well as the banal but sinister omnipresence of the holiday. On a purely visceral level, it’s also one of the first films to depict an evil Santa Claus, predating the controversial horror films like Christmas Evil and Silent Night, Deadly Night by several years.

This Christmas, if you need a break from all those life affirming messages of peace on earth and goodwill towards men found in most holiday films, and if you’re also a little tired of watching Bruce Willis blow away the same Eurotrash baddies for the umpteenth time, take a detour to Canada and revel in the dark charms of The Silent Partner. 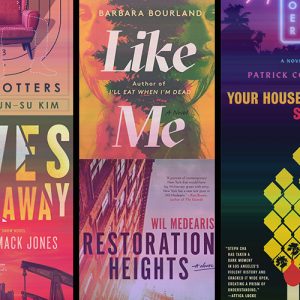 What is noir, anyway? Some define it simply as "starts bad, gets worse;" others believe that noir implies a certain bleak...
© LitHub
Back to top