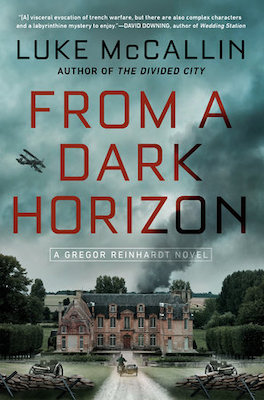 The following is an exclusive excerpt from From A Dark Horizon, by Luke McCallin, a historical novel set in the final days of WWI, when a brutal murder threatens the coming peace.

Reinhardt led Gelhaus back to the Méricourt farmhouse. The captain peered in and around, muttering as he crouched to one knee by the dresser, running his finger around its blackened edges. His face was heavy-cheeked. He often had something of the hunting dog about him, all morose expression, jowls, and lidded eyes, but he brightened as he spotted the bottles on the floor. He picked up one of brandy, muttering happily as he held the label to the light, then plucked up another of brandy. Reinhardt hesitated, then picked up the Mosel he had seen earlier. Gelhaus nodded approvingly, then gestured Reinhardt outside into the clean morning air, over to a car parked in front of the house. Gelhaus did not so much walk as roll, all the movement seeming to come from his hips. He rooted around in a leather valise, coming up with a corkscrew. He tossed it to Reinhardt.

“Open that,” Gelhaus told him, giving him the brandy. He went back to searching in his valise and set two tin cups on the hood of the car. “And don’t be telling me it’s too early. It’s never too early, and you look like you need one. At least. And at last,” he smiled, as Reinhardt got the cork out of the bottle. “Pour.”

Bodo Gelhaus was a strange man to Reinhardt. He was the 1st Company commander but was essentially Colonel Tomas Meissner’s second-in-command and commanded half the battalion. That a captain was second to a colonel, that Reinhardt as a lieutenant had command of a company, spoke to the huge losses the Germans had taken since March. Gelhaus was popular enough with the men, and he was a brave man. His medals and reputation spoke to that, and Reinhardt had seen him under fire. He was a Western Front veteran, nearly three years in the field artillery. When the battalion had arrived in France, Gelhaus had been transferred to them, his job to help get them acclimated to the trenches and to share the experience he had. He was garrulous and funny, generous with his time and a good officer, but there was a ruthless streak to him. It was there in the Iron Cross on Gelhaus’s tunic, in his sense of humor, the way he handled bad news, and in the way he just seemed to let life wash over him, never seeming to think very far ahead.

Gelhaus sat down on a bench outside the house, grunting against the swell of his gut. “You’re longer dead than you are alive,” Gelhaus toasted him. He knocked his drink back, poured another. He lit a cigarette. “Smoke if you wish, Lieutenant,” he said, as he waved smoke away, then leaned back to cross his booted feet at the ankles. He closed his eyes and sighed.

“I forget you’re as pure as the driven snow, Reinhardt. Violins. Ladies of the night. Prostitutes. Even though you pay them, you have to warm them up. Dinner. Drinks. Dancing. More drinks. Make those French ladies forget you’re a German. More drinks to make ’em forget they’re Alsaciennes, and as good as any German.” He yawned, hugely. “And to think what I could’ve been waking up to . . . Next to the posterior of the aptly named Madame de la Levrette . . . Got a backside you could break a battalion on.” He yawned again, and a smile curled across his mouth. “Not shocking you, am I?”

“Not at all,” Reinhardt protested.

“Had your wicked way with the fairer sex, have you?” Gelhaus asked, as he poured another drink. He glanced up to see Reinhardt’s color rise. “Too young to be a suitor. Don’t see you as a paying customer. It must’ve been a tumble in the hay somewhere, right? A flaxen farmer’s daughter, was it? Russia, it must’ve been. I’ve not seen any sign you’ve diddled a Frenchie.”

It had been Russia, and she had not been a farmer’s daughter, but she had been flaxen. The daughter of the man in whose house they had been billeted for a while in Vilna. An important man, Reinhardt and the other officers billeted there had been told. An ethnic German, a pillar of his community, upstanding in church, a man for the future. Reinhardt never knew who caught whose eye, who reeled who in, the girl or him. The first time had been quick and sticky and bloody, both of them aghast at what they had done. But then it had happened again, and again. Tangled assignations, fumbling and thrusting against each other in strained silence, the thrill of taking this girl beneath her father’s roof, the things she whispered in his ear.

Her name was Sophie. No one before.

And no one since.

“Here,” Gelhaus said. He handed over a picture postcard. A woman, wearing almost nothing, smiling lasciviously over her shoulder. “What do you think?”

“Quite the prude, Reinhardt,” Gelhaus laughed. “That’s why they call her Madame de la Levrette.” Reinhardt nodded, not understanding. “Keep it. Pay her a visit one day. We’ve got to see Hessler.”

“Hessler?” Reinhardt yelped, wincing as he heard himself. He wound himself back in, back from thinking of Sophie, of her knees hiked around his shoulders, the way she had of laying her head to one side, how she stifled her moans into the folds of her dress.

“Major-General Hessler to you, young man. Yes, that old fire-breather. He’s of the oft-stated opinion that, and I more or less quote: ‘If discipline were only left to those able to mete it out in the conditions closest to where the infraction took place and in those conditions most conducive to ensuring its meritorious effects, then our armies would be in a situation of far greater efficaciousness.’ What do you think? Nothing, of course. You keep a politic silence, as befits a very junior officer in a very large army.” Gelhaus smiled, but Reinhardt could see and hear the ruthlessness in him, running through his words and off his expression like something caustic. It brought out a cold sweat, and it brought the lice alive in the seams of his clothes at the small of his back. “Hessler I’m sure would dearly love to shoot someone for this. He’d shoot a lot of men if he could. Rather like the French and British apparently do. Did the Russians do the same? He’d dearly love to have shot Sattler. He might still try to shoot people Sattler was close to; his friends, for example. You ask me, which you haven’t, Hessler’s looking for a scapegoat to pin this on. So is Wadehn, his equally fiery but just a bit pickier deputy commander.”

“It may have escaped your attention, Lieutenant Reinhardt, but I was otherwise occupied last night, and counted on being otherwise occupied today until that wretch Otterstedt tracked me down. I’m supposed to be on leave. So, yes, I’m just hearing. What do you know?”

“You saw the room. There were two bombs. Shaped charges.” “Always have to appreciate a professional job. Go on. More thoughts?” “Who was in that meeting? Was the Colonel there?”

“The Colonel was not there, no. He had leave, like me. I don’t know if Otterstedt tracked him down, but I imagine he did, so he should be here presently. As to who actually was there, that, my dear boy, is a good question. But I do know who organized it.” Gelhaus’s eyebrows went up as he looked at Reinhardt, and he flicked his chin up once or twice. “No guesses? Everyone’s favorite storyteller . . . ?”

“None other! Count Marcusen. The fantabulist supreme.” Gelhaus knocked back his drink, gestured at Reinhardt’s. “He’s wounded, but alive. I swear, that man has more lives than a cat. Drink up. You know how he’s been running around since he came across the lines, making a nuisance of himself, claiming his rights, talking nonsense about who knows what is happening on the other side.”

“Marcusen is a windbag. Everyone said so.”

“Even a stopped clock is right twice a day, Reinhardt. Maybe he did have something to say. Maybe his stories fell on the right ears.”

“On brass and braids,” Reinhardt murmured. “What’s that?”

“Something Sattler used to say. Brass and braids. Officers. Senior ones.” Gelhaus smiled, spitting a bit of tobacco off his tongue. “‘Brass and braids.’ I like that! Did I ever tell you my fondest memory of this war, Lieutenant? It was seeing two generals dead in the same shell hole. Funniest fucking thing I ever saw. Last year, at Vimy. The Canadians were on that ridge so fucking fast, half our men were still at breakfast, and those two generals were out for a morning ride or whatever men like them do.

What do they call those things, Reinhardt? Those morning rides.” “I don’t know there’s a name for them, sir.”

“Yes, there is. A constitutional. Isn’t that it?” “That’s one’s first trip to the toilet, I believe, sir.”

Gelhaus guffawed. “First shit of the day! And the Canadians dumped a big one on them! By the way, Hessler was at the meeting. Barely a scratch on him, I hear. So was that rather effete aristocrat he keeps around. The aide-de-camp. What’s his name?”

“The very one. I hear he was found hollering in a corner with someone’s guts all over his face. Had to be smacked quiet.”

“So there are witnesses to the bombing?” “Yep.”

“The château?” Reinhardt asked. Gelhaus shrugged. “And the dead?”

“In the ground, I’d imagine. Look, enough talk about the bombing. Hessler will go over it. Tell me about Sattler. He was a strange one,” Gelhaus said. “An officer, demoted to the ranks.”

“He wasn’t a proper officer,” Reinhardt said, then regretted it, remembering what Sattler had said to him the day he had been commissioned. “It was a wartime commission. I . . . I recommended him. In Russia. Meissner approved it.”

“He’d a funny way of showing his appreciation. He assaulted you, didn’t he? He was on a charge if I’m not mistaken.”

You’re not mistaken, Reinhardt thought. He was one of your subordinates. Did you even know who he was? he wondered.

“Assault. On me. Reckless endangerment of his men. Consorting with the enemy. A tribunal demoted him, gave him a month’s confinement to quarters, pay and leave docked.”

“Lenient, for sure. From what I remember, he got you all into hot water.”

From what you remember . . . ? But then, Reinhardt thought, it took a lot to get Gelhaus’s attention. “Unless there are a thousand dead before breakfast, don’t bother waking me,” Gelhaus had once said, and Reinhardt believed it. Anything less—such as what got a lieutenant demoted to the ranks—simply did not register. Such, Reinhardt was learning, was only part of what the Western Front could do to your mind. 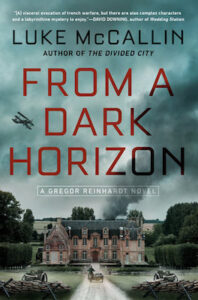 Excerpted from FROM A DARK HORIZON by Luke McCallin, published by Berkley, an imprint of Penguin Publishing Group, a division of Penguin Random House, LLC. Copyright © 2021


From A Dark HorizonLuke McCallin 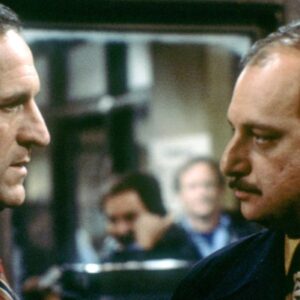 The 1980s: A Forgotten Golden Age of Crime Television One and I had a novel, two and I had a sequel, three and I finally felt I could say I had a series. So the occasion of my third...
© LitHub
Back to top