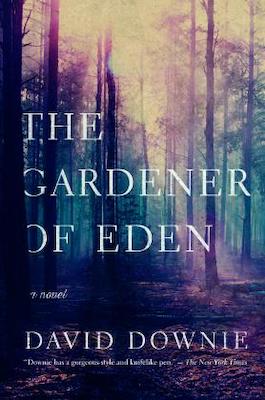 The following is an exclusive excerpt from The Gardener of Eden, by David Downie. A dark history looms over Carverville, a down-and-out timber town in the Pacific Northwest. When James, a man who had been gone for nearly forty years, mysteriously returns, he finds something sinister washed up on the beach, and suddenly the town’s long-buried secrets are threatening to return with him.

The drone was back in the air and on its way north before Taz could reach the parking lot. It whizzed overhead as James crossed the shale and loose sand and marched to the tide line. From her lookout atop the stairs, Beverley saw him approach the object, get one hand on it, then rush back as the rollers came in. He followed the waves out, grabbed the wires around what looked increasingly to Beverley like an animal trap, wrestling but giving up again as a new set of breakers crashed down, chasing him up the beach. He was on his third attempt when Taz returned clutching a padded envelope, glowing with triumph.

Before he could gloat, Beverley pointed and said, “Go on down and give him a hand, will you? He’s going to get drowned if he’s not careful. Tell him to leave that darn thing alone and come back up, my French apple pie is waiting and I’m hungry for it.”

Beverley thrust a pair of gardening gloves at Taz. He took them, handed her the envelope and his smartphone and timidly obeyed, climbing down the stairs like a cat crossing a puddle, then bounding like a baby camel across the sand to the water’s edge. Beverley shook her head, muttering, watching them wrestle the basket, or whatever it was, up to their knees in water, knocked down by waves, then up again and dragging the object across the beach above the high-tide line. A sudden sense of déjà vu, of a nightmare reenacting itself, seized her. How could she have not recognized that cage? Cupping her hands, she began to shout into the wind, then gave up, realizing it was pointless. Panicky and breathless, she clambered down the staircase and waddled over the beach to where they stood gasping, splayed out on the sand. Both were soaked, cut on their arms and legs and bleeding, their clothes torn by the rusty razor wire coiled around what was unquestionably a large, battered, steel animal trap encrusted with barnacles.

“Oh my god,” Beverley said, sucking in her breath and covering her mouth. “What in god’s name is it?” She peered into the cage, screamed and fainted, dropping the envelope and phone and falling heavily on top of them. Taz leaped up, rolled her over, and hoisted her back onto her feet, while James, still out of breath, stared at the skull and bones in the trap, and the rusty saw blade jutting out of the galvanized mesh coiled in razor wire and trailing seaweed.

“We’ve got to call the police,” he said, fumbling onto his hands and knees and crawling to get closer. He tried to reach through the mesh to touch the bones and determine if they were real. One was clearly a thighbone. “They might be plastic,” he said, tugging the severed rope attached to the cage. “It might be some sick hoax, I can’t tell unless we get the trap open.”

Taz stared dumbly, then scooped up the phone off the sand and began taking pictures.

“What are you doing?” she said. “Don’t do that, don’t call the police, are you out of your minds? Let’s get out of here, let someone else find it and report it. Let’s go before any of the guests look down and see us.”

Taz and James glanced at each other, hesitating. “We’ve got to call,” James said, “it would be unethical not to. That could be what’s left of a human being.”

Bending with difficulty and snatching up the envelope, Beverley regained her sangfroid. “I will call the police,” she said, “from the office. If it is a real skull, that person has been dead a long time and can wait.”

Pausing to orient himself, as if in a waking nightmare, James heard and felt something, the same vibration and roar he had heard and felt in the parking lot. Now he knew what it was. The ’copter had followed the line of the beach, picking up his footsteps in the sand, and was closing in for the kill, its searchlights making the fog throb and glow but also, James knew, blinding the pilot and crew, like the high beams of a car driving through a snowstorm. Racing toward a skeletal shape nearby, he threw himself underneath the chassis of a broken-down lumber wagon. Closing, closing, then hovering overhead, prowling, then moving again, this time slowly, very slowly, inching inland, the blinding glow of the hellish eggbeater helicopter lit up a rusting hangar a football field away from where he hid. James stood and ran.

“I will call the police,” she said, “from the office. If it is a real skull, that person has been dead a long time and can wait.”

Stumbling on the tall, tenacious weeds filling the lot around him, he fell forward, landing on his palms. Breathless, as he pushed himself upright he heard another noise, a different noise, the distant tinkling and panting and scrambling of paws. So, there were guard dogs after all, he said to himself, primed, ready to fight, but with what weapon he did not know. Would they be German shepherds or mastiffs or Dobermans, their teeth as sharp and deadly as razor wire, or would they be bloodhounds, the kind the sheriff used to track men or hogs on the run?

Gunfire rang out as the helicopter spun around, its beams searching for prey. Bent double and sprinting toward the fence, James turned and stumbled again, falling hard on his side. Up again, drenched in sweat, aching and dizzy, he rushed forward, hearing the growling and snarling noises closing in from behind, and the deafening rat-a-tat-tat of semiautomatics tearing through the air, fired from the glowing gunship thrumming above. The path he had first taken through the weeds appeared before him and he charged along it, his windbreaker flapping, no longer bothering to stoop or hide.

Tripping, stumbling, gasping, he glimpsed the breach below the fence. About to dive in, he swiveled and saw not three feet behind him a mastiff-sized wild pig, its spittle-flecked tusks jutting on both sides from a massive, wagging, piebald head. Seeing James in that same instant, the hog let out a keening oinking snarl, butted him out of the away, and slipped as if greased into the hole under the fence, followed by six squealing piglets.

“Holy god,” James gasped, seeing them disappear down the ravine to the beach, “my freaking god, what have I done to deserve this?”

He sank to his knees by the fence, slipped underneath it into the saw grass, and, lying in the ravine with his arms covering his face laughed out loud, the laughter mixed with sobs of anxiety and exhaustion as the helicopter sped away overheard, gunfire strafing the sand around him and the fleeing, terrified hogs.

From GARDENER OF EDEN. Used with the permission of the publisher, Pegasus Books. Copyright © 2019 by David Downie. 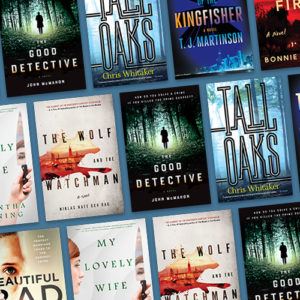 March's Best Debut Thrillers and Crime Novels Breaking into the crime game isn’t easy, but every month, a few brave and talented souls make a go of the mystery racket....
© LitHub
Back to top