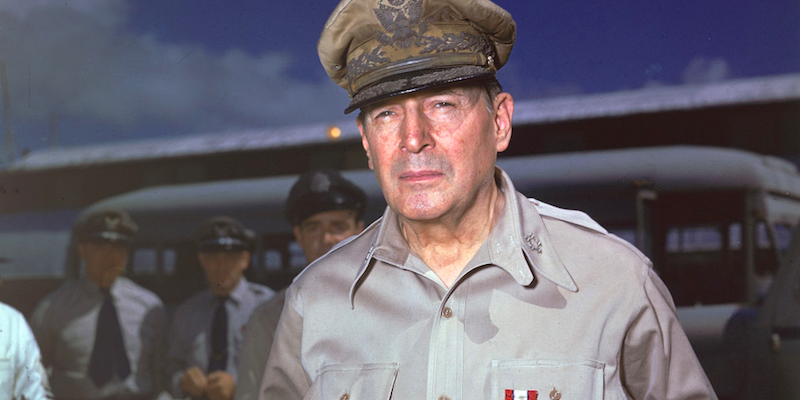 Legendary American General Douglas MacArthur has been called either a brilliant maverick or a reactionary megalomaniac, though both are likely true. From World War I to the Korean War, MacArthur held all the top ranks, won every high decoration, and is commonly idealized for winning the War in the Pacific—after nearly losing it early on, that is.

After WWII, US ambassador to Japan William Sebald said about the controversial general: “Never before in the history of the United States had such enormous and absolute power been placed in the hands of a single individual.”

Whether reviled or exalted, the blue-blooded son of a general always kept a keen eye out for even higher glory and commissions.

So it’s no wonder that MacArthur might have presided over a massive plunder heist in postwar Asia. It was far from the first conspiracy with a MacArthur connection, however, and more than one involved ambitions to the US Presidency.

Before the war, in 1933, the accusations came from a legendary American commander of a different stripe—then retired Marine Corps Major General Smedley Darlington Butler, who would soon write the antiwar classic War is a Racket. A cabal of top businessmen, Butler warned, were scheming to overthrow President Franklin Delano Roosevelt and establish a fascist-style dictatorship of America. For their front man, they first wooed the maverick Marine general Butler himself. But Butler wasn’t playing along, since he sympathized more with everyday people and common soldiers. So Butler blew the lid off the plan. It first broke in the Philadelphia Record and New York Post. The Marine general even testified in detail to the McCormack-Dickstein House Committee on Un-American Activities, which was investigating both Nazi and communist activities in the US.

Many do not know about the MacArthur connection, despite Jules Archer’s thorough documentation of his involvement in The Plot to Seize the White House. During the hearings and news stories, hushed and sanitized though they were, it was revealed that the conspirators’ first choice for their fascist “Man on a White Horse” wasn’t Butler but none other than General Douglas MacArthur.

The faction aligned with renowned financier J.P. Morgan especially favored MacArthur. As then Chief of Staff of the United States Army, MacArthur certainly had the pedigree and connections, yet the general would prove too extreme a choice even for fascist-leaning business interests. The year before, in 1932, MacArthur had led a brutal clampdown on the Bonus Army—the tens of thousands World War I veterans protesting with their wives and children in Washington, D.C. for the payment of bonuses long overdue. Now plagued by the Great Depression, many of them feared they were going to starve without the reward promised them by Congress. The great MacArthur did not sympathize. He called in his troops and tanks and rode at the head of his charge, ordering his men to attack with fixed bayonets and sabers drawn and, if that was not brutal enough, had them deploy tear gas just as the enemy had done to those heroic vets in the Great War.

Fast forward to World War II, when the Imperial Japanese conquered and subjugated Asia without mercy. They also plundered it. It’s said that the Japanese military even enlisted yakuza gangsters to help move vast stocks of gold and riches to occupied islands such as the Philippines.

Whether the Japanese moved the spoils to the Philippines and buried it in secret caverns and underground shelters is disputed. It’s referred to as “Yamashita’s Gold,” named after the top Japanese general defending the isles from General MacArthur’s storied return in 1945. The clearest and strongest substantiation of the plundering and how it was used once in American hands comes from dedicated historians Sterling and Peggy Seagrave, who wrote two books that ask many good questions: The Yamato Dynasty: The Secret History of Japan’s Imperial Family; and Gold Warriors: America’s Secret Recovery of Yamashita’s Gold.

The Seagraves and others allege that MacArthur inherited that secret mother lode of plundered fortune after the bloody and chaotic Pacific War ended. Those connected to commandeering the plunder include notorious Japanese gangster Yoshio Kodama and controversial American intelligence operative Edward G. Lansdale.

Edward Lansdale was an enterprising and legendary figure who firmly believed in American exceptionalism and has been called the model for both Graham Greene’s The Quiet American and the influential Cold War novel The Ugly American. Lansdale is seen as responsible for everything from America’s involvement in the Vietnam War to the Kennedy assassination, depending on the angle. While operating in the Philippines, Lansdale worked to prop up his own man for president, one Ramon Magsaysay, whom Lansdale and the CIA helped to defeat opposing Communist rebels. In the mid-1950s, Lansdale took his road show to Vietnam, and on and on.

As for General MacArthur, the Seagraves contend that the general visited treasure sites in the Philippines after Lansdale reported them to MacArthur—but not before Lansdale exerted ruthless interrogation methods to discover even more spoils.

The unknown Lansdale could be seen as paying due tribute. After all, General MacArthur reigned as Supreme Commander of US involvement in Asia from his imposing HQ in Tokyo, much like one of those aspiring emperors who once ruled and consolidated vast regions of the Roman Empire. The formidable and popular commander rivaled President Truman himself, and had long considered running for president as a Republican. MacArthur’s power struggle with President Truman was not helped by an awkward and brief attempt at reconciliation in the middle of the Pacific Ocean at Wake Island in 1950. It came to a head with Truman’s dismissal of MacArthur at the height of the Korean War.

Yet, as the Seagraves argue, the plundered Japanese treasure would go on to outlive MacArthur by decades, its profits creating one unassailable legacy after another. It went on to fund CIA missions, and black ops, and on and on, right down to the Nixon administration’s dirty tricks. We see the fingerprints of such machinations on many American transgressions, right through to the debacle that was the 2003 invasion of Iraq. And onward today. When, upon leaving office in 1961, celebrated former WWII commander and then President Dwight D. Eisenhower warned of the dangers of the Military Industrial Complex, he well knew what he was predicting, warning, and deploring. Just like retired Marine General Smedley Butler.

All this little-known background is the starting point for my novel. In 1948 Hawaii, Wendell Lett, a WWII veteran turned deserter, seeks a cure to his combat fatigue (PTSD) at a mysterious facility on the Big Island called the Preserve, but his handlers aim to turn him into a vile assassin for a deadly plot that runs all the way to—guess who—General MacArthur. The gambit was set. With the American generalissimo at peak strength and popularity, it was the perfect opportunity for certain powerful interests back home to co-opt the whole enterprise for a devious conspiracy.

My novels often introduce readers to lesser-known historical events. The plight of Wendell Lett himself is fictional, as is the Preserve itself, but MacArthur, Lansdale and even Kodama appear in the story, MacArthur in a brief but decisive cameo, Lansdale in a main role highly fictionalized. As with Lansdale, many either love or hate MacArthur depending on allegiances. I simply find both characters to be those larger-than-life types that a writer simply can’t resist fictionalizing.

Lansdale, like many at the time, was surely looking to get a leg up. In that in-between world between world war and Cold War, the existence of a facility like the Preserve certainly would not have been surprising. After the war, the early days of a reborn US intelligence system constituted a type of Wild West prompted by policy musical chairs, power plays, and the seminal National Security Act of 1947 that ultimately created the CIA. From this font of intrigues arose the true and disputed existence of clandestine rogue operations and camps, classified psychological drug programs, and even plots against major figures, including assassination. I’m no conspiracy theorist, but there’s enough historical record already released to show such things went on. It’s a long line but certainly no stretch.

Steve Anderson is the author of The Preserve, the sequel to his novel Under False Flags. Other novels include the Kaspar Brothers series (The Losing Role, Liberated, Lost Kin). In the thriller The Other Oregon and the crime novella Rain Down, he writes about his home state. Anderson was a Fulbright Fellow in Germany and is a translator of bestselling German fiction as well as a freelance editor. He lives in Portland, Oregon.
https://www.stephenfanderson.com 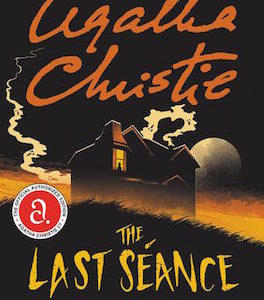 I’ve no explanation of this story. I’ve no theories about the why and wherefore of it. It’s just a thing—that happened. All...
© LitHub
Back to top