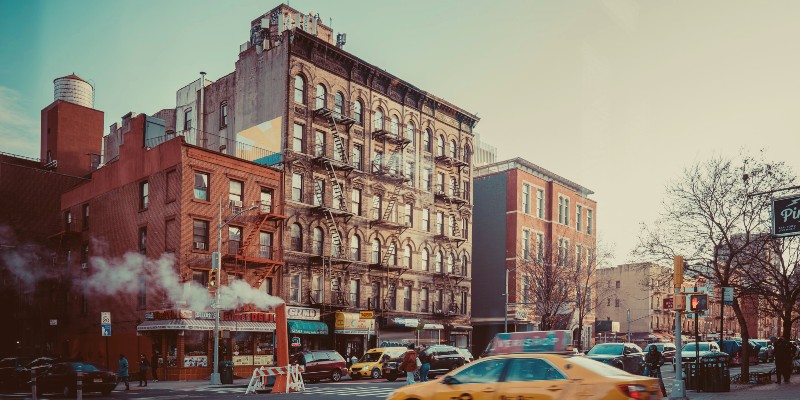 Gentrification and uprooted communities were at the heart of this modern New York classic.

The Lower East Side, the downtown Manhattan neighborhood south of East Houston Street and east of Bowery, dramatically showcases the nadir and apogee of The Gentrification Plot’s story of urban change. It makes sense for many reasons to start here. For hundreds of thousands of immigrants processed through Ellis Island in the nineteenth and early twentieth cen­turies, the Lower East Side was the site of first landing and the gateway to the city and the nation. As a result, more stories of America begin in the Lower East Side than anywhere else. Historically, this working-class, immigrant neighborhood crammed cheek by jowl with garment workers, fruit sellers, printers, dry-goods shopkeepers, and pushcart vendors was the place where you established your foothold in New York. The Lower East Side was also the neighborhood you fled as soon as you had enough money to relo­cate to Bay Ridge or Westchester or almost anywhere else. The neighbor­hood by the 1970s was “the poorest in Manhattan outside Harlem” and regarded as “one of the most undesirable places to live in the city,” a “free­fire zone” blighted by high rates of violent crime, open-air drug dealing, stubborn poverty, and dilapidated housing after years of disinvestment, demolition, and white flight.1 Yet by the late 1990s, when this neighborhood once left for dead was buzzing with upscale restaurants, candlelit lounges, and glass condos in ways previously unimaginable, it might just be the place you wanted to live the most. Certainly other neighborhoods in New York gentrified before the Lower East Side; one thinks of SoHo in the early 1980s, but its gentrification was relatively contained. When one looks back at how gentrification spread across the city in the early 2000s, one sees the Lower East Side was where the fires of gentrification were first lit. For this reason, too, it makes sense to start the story of The Gentrification Plot in this neighborhood. 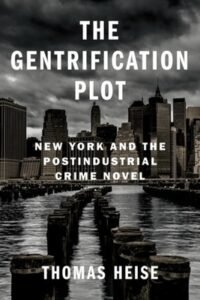 There are many ways of telling the story of the Lower East Side’s post­-2000 demographic overhaul. The crime novelist Richard Price in his eighth novel, Lush Life, chiefly tells it as a story of real estate and gentrification in the neighborhood where long-term residents are “hanging on by [the] fin­gernails” and where wealthier newcomers are elbowing their way in to make a place for themselves and pricing out others in the process.2 By 2008, the year Lush Life was published, the ethnic and class succession of the Lower East Side had largely been accomplished. When walking the neighborhood in search of a story to tell, Price remarked how he had said to himself, “I want to write about this now,” but then noted that “now is over…. The new Lower East Side is pretty old. But pump it back a decade, when it was first catching fire.”3 Accordingly, he set his novel a few years earlier, not quite a decade before 2008, but in 2002 to be exact, when the ownership of the neighborhood was still up in the air, when the neighborhood was chang­ing but still undefined—was it an ethnic enclave, a neobohemian play­ground, an emerging upper-class residential district?—and when its status and future were still being actively fought over. Only a six-year difference, you might protest. Yes, but in gentrifying New York that’s practically a life­time. Lush Life narrativizes an old neighborhood order breaking apart, a neighborhood fiercely divided over housing and public space, creative-class whites in one area, Blacks and Latinos in another, trespassing occasionally into each other’s territory with deadly consequences. The fatal encounter that launches the novel unfolds between a twenty-something hipster writer and bartender named Ike Marcus and a seventeen-year-old Puerto Rican drug dealer named Tristan Acevedo. Nervously attempting his first mug­ging with his partner in crime Little Dap Williams, Tristan panics and shoots Ike, killing him with a single .22 caliber bullet to the chest. The duo flee in the four-AM darkness down Delancey Street back to their turf, the public housing projects along the perimeter of the neighborhood, leaving Ike to bleed to death in the street and his two heavily inebriated compan­ions, Eric and Steven, to piece together what just happened.

In interviews Price has made clear that he sees the machinations of the real estate industry, one of the main pistons of today’s postindustrial FIRE (finance, insurance, and real estate) economy, as instrumental to under­standing his novel. “Real estate is violence. It’s physical violence, but it’s also uprooting, it’s clashing, it’s tectonic plates,” he has remarked.4 The observation underscores an infrequently recognized but essential point: real estate is not merely a collection of buildings in space but a social and spa­tial process through which spaces, places, and ways of life are made and unmade via struggle. It is an arena of political, economic, and cultural con­flict that can be so violent that it feels “tectonic” to the characters of Lush Life, as though the mantle of the earth has moved. Yet Price has also called the real estate industry the “greatest crime fighter in the word,” better than the cops at taming the neighborhood. But, as we will see in Price’s novel, the real estate industry needs the cops too in order to survive. “Really aggres­sive policing and real estate needing a place to go,” Price contends, was the one-two punch that flipped the Lower East Side. Soon enough “the place that used to be a heroin apartment is now going for a million dollars.”5 In Lush Life, real estate gentrification deracinates the neighborhood’s resi­dents, making them lose touch with their roots, and then it displaces them, putatively making the new whitewashed neighborhood calmer and more crime-free for those residents who can afford to remain.

What is helpful to keep in mind when reading Lush Life, as well as the other novels in this study, is that real estate is never just about real estate, just as crime is never just about crime. In Price’s work, real estate and its cognates, such as tenement apartments, high-rise public housing, and upmarket restaurants and lounges, are stand-ins that condense and con­cretize abstract social, economic, and spatial transformations that are dif­ficult to see or simply too messy to make sense of in other ways. In telling the story of the social convulsions unfolding in one small but important neighborhood, Price tells a much bigger story of the tumultuous transition from the welfare state to the new neoliberal order, a national story about the dismantling of midcentury liberalism, embodied in the novel’s hous­ing projects where Tristan lives, and the new strategies of quality-of-life policing, embodied in the novel’s roving patrols that eventually solve the murder. The police keep people of color and the poor in line while secur­ing the flow of private capital that is remaking Price’s Lower East Side into a neighborhood for the professional classes. Such is the function of the cops in this novel. Ultimately, Lush Life is an urban crisis narrative in a neigh­borhood known for being in perpetual crisis; it is just not the kind of crisis readers might expect. Rather than telling the story of a neighborhood in the last gasps of its decline, Price tells the story of the Lower East Side’s vio­lent rebirth in postindustrial New York.

The subjects of cops, crime, and gentrification are central to all of the neighborhoods examined in The Gentrification Plot. What makes the Lower East Side different, apart from it being, as Price has called it, “probably the most important neighborhood in American history,” is the manner in which culture has been expropriated for redevelopment of the area.6 As Suleiman Osman has argued, historical preservation has been a tool for gentrifying New York neighborhoods, especially in brownstone Brooklyn, neighbor­hoods that began as upper-middle and upper class, suffered a period of decline, and then rebounded largely on the strength of their architectural beauty.7 These wealthy neighborhoods—such as Park Slope, Brooklyn Heights, and Cobble Hill—have used historical preservation districting to boost property values, tightly regulate the physical alteration of the streets and brownstones, and limit the intrusion of big-box retailers. This deliberate strategy—shot through with all kinds of racial and class implications—has had the added value of conveying a sense of an authen­tic neighborhood preserved from the erosions of time and the tawdry cor­ruptions of the marketplace. The Lower East Side, which was poor and marginal from its earliest days, has had a different relationship to its sto­ried past. Since the late 1990s and early 2000s, its relationship to its past has not been so much the preservation of its history but the postmodern salvaging of it, an ironic recycling and thematization of it, in other words, not so much a nostalgic restoring of its past to its original state but a con­temporary repurposing of it for new uses. The urban planner Lara Belkind argues that this has come in the form of upcycling old storefronts, “defunct façades, signage,” and the remaking of the spaces of synagogues, beauty salons, tenement sweatshops, massage parlors, “and other physical traces of the neighborhood’s working-class and immigrant past.” The selling of gritty subcultural and ethnic differences as subversive style and cultural capital to creative-class newcomers in the Lower East Side “has been trans­lated by the market into real estate value,” and “this new value has sharp­ened the struggle for space between new and existing resident groups and land uses.”8

As we will see in Price’s work, gentrification’s processes create and com­pel new scripts of identities—new habits of consumption, new practices of socializing, new ways of being in the city, and new codes by which groups recognize, affirm, or resist one another. Thus how space and history is repurposed, represented, and made meaningful in the gentrifying neigh­borhood turns out to be central for understanding the geographical con­struction of subjectivity and the narratives of geographical struggle in Lush Life. What does the neighborhood mean to me? What is my place in it? How does my being here or not being here change this place? Questions like these suffuse Price’s novel, even when they are not asked directly. Further to this point, Lush Life shows that in the midst of disorienting change, long-term urban residents are haunted by the history that urban redevel­opment excavates and repurposes, and they respond by constructing geographies that reinforce personal and social boundaries and by gravitat­ing to signifiers of history and ethnic identification. However, the work of establishing a feeling of geographical rootedness as the cultural meanings of place are being uprooted and resignified fail in Price’s novel, underscor­ing the painful challenges of gentrification. This chapter will also show that in Price’s hands the upscaling of the Lower East Side—its metamor­phosis from a mythic launching pad for the poor to the postindustrial city’s “MFA playground” for the privileged—signals the end of one cultur­ally central storyline Americans have told themselves about the American dream of upward mobility, a dream that has always been spatial: a flight to a better location, a better neighborhood.

Excerpted from The Gentrification Plot: New York and the Postindustrial Crime Novel, by Thomas Heise. Copyright (c) 2021 Columbia University Press. Used by arrangement with the Publisher. All rights reserved. 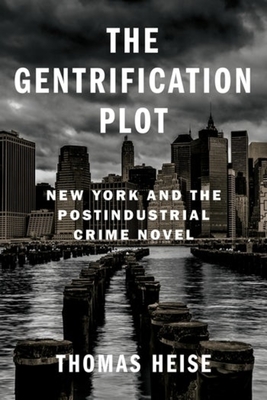 Thomas Heise is an assistant professor of English at Pennsylvania State University, Abington. He is the author of Urban Underworlds: A Geography of Twentieth-Century American Literature and Culture (2011), as well as the novel Moth; or how I came to be with you again (2013) and Horror Vacui: Poems (2006). 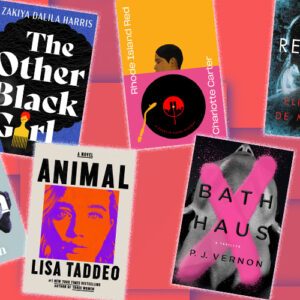