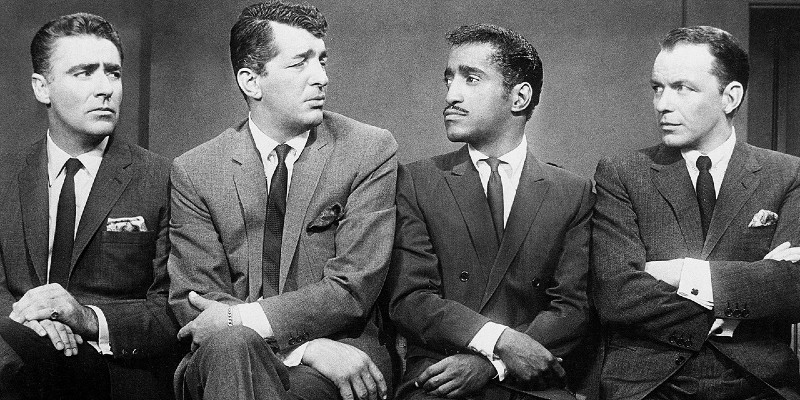 From 1960 to 1980, Sinatra, Martin, Davis Jr. and company extended their stardom with a strange, surprising run of movies.

You either doo be doo be do like the Rat Pack or you don’t. Their legacy is messy. On the one hand, the supergroup of Frank Sinatra, Dean Martin, and Sammy Davis Jr. projected a contagious party atmosphere, they were heroes to the working class people they resembled and represented, and they were integrated before it became fashionable. On the other hand is the racy (and racial) humor and outright misogyny they trafficked in.

Originally, the “Rat Pack” was a group of Humphrey Bogart’s Hollywood pals, but the name got appropriated as a marketing scheme by Sinatra and the Sands Hotel. The scheme hit the jackpot, and Sinatra, Martin, and Davis, mainly, but also Joey Bishop, Peter Lawford, and their satellites and mascots parlayed an image of flashy hedonism into an industry and a cultural benchmark.

However you feel about them, there’s no denying they exuded a preternatural magnetism and confidence—perhaps because they’d already paid their dues and were middle-aged millionaires by 1960. They no doubt sensed the times a-changin’. As the era and the music that made them famous were fading, becoming part of the pack extended their sell-by dates. So why not go all in and over the top?

Crime fiction movies were a natural genre for the Rat Pack. The nonconformist criminal character and the tough guy detective have always been attractive costumes for stars to don, and these fit the boys well, as well as their $1,000 sharkskin suits and slick onscreen/onstage personas. Here then is an appropriately loose collection of crime movies starring members of the Rat Pack. 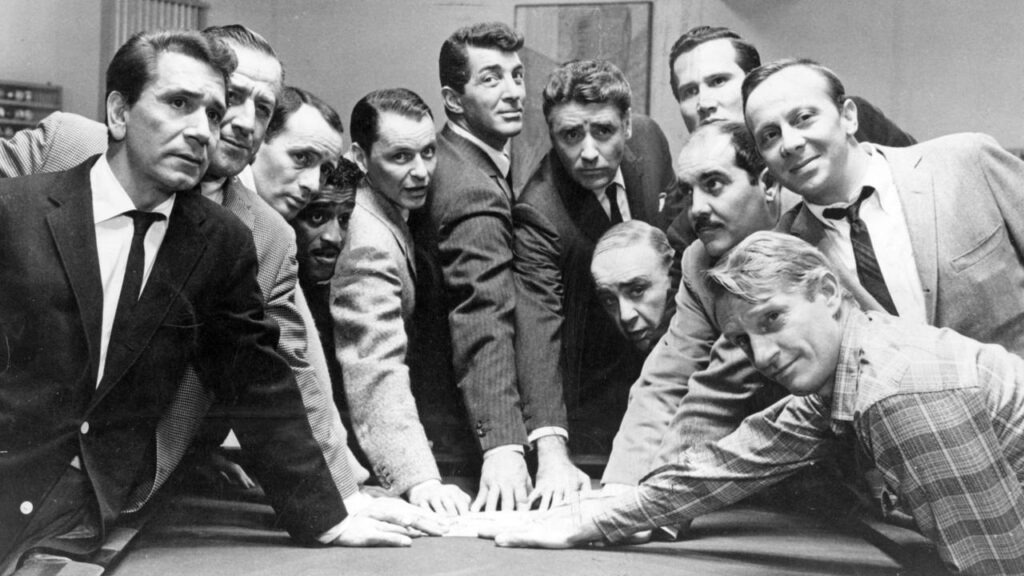 The seminal Rat Pack movie is a heist movie. Based on a story by frequent Twilight Zone writer and Logan’s Run author George Clayton Johnson, Ocean’s Eleven was filmed during a three-week period in 1960 (known as “The Summit”) while the Pack was performing two Vegas shows a night. Danny Ocean (Sinatra in his cocksure alpha persona) gathers his WW2 buddies from the 82nd Airborne to simultaneously rob five casinos on the Strip. Martin is the well-tanned voice of reason, and he and Davis each do a jaunty musical number, but it’s Lawford who has the best character arc. Much of the dialogue was ad-libbed, Angie Dickinson is given too little to do, and there are some wince-inducing jokes. But the comic twist at the end works—not the least because it allows our boys to stroll away as antiheroes, not criminals. After all, they were pallies with the incoming President. 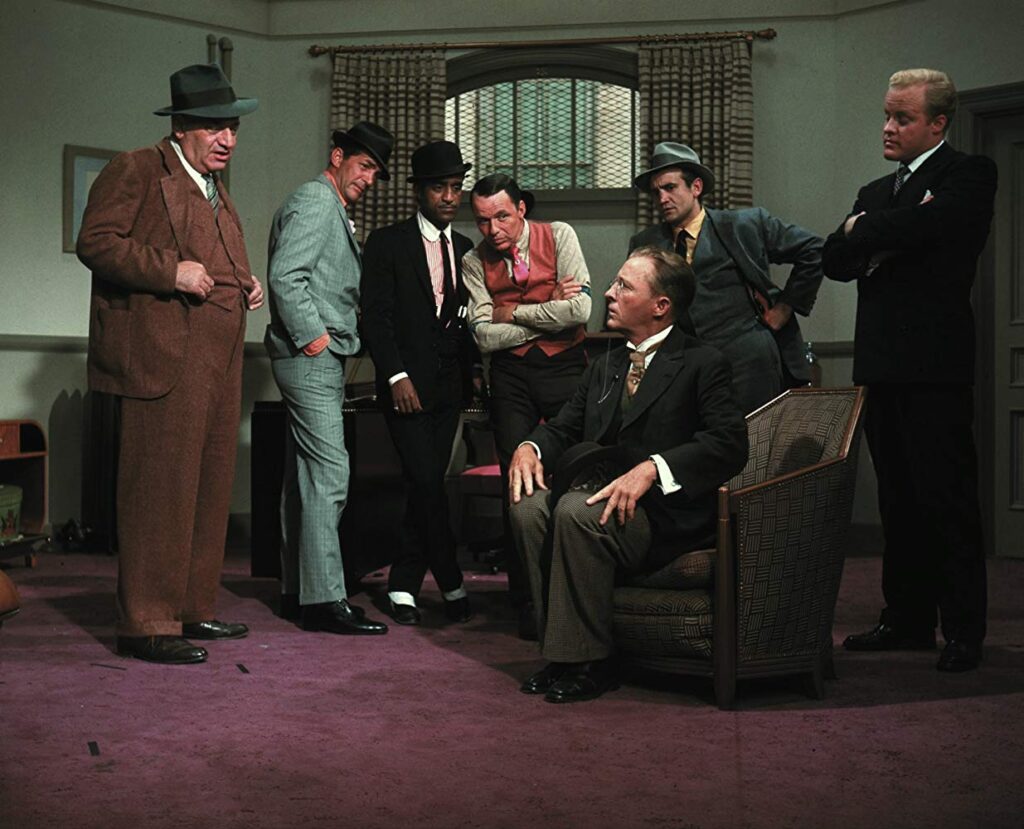 The Rat Pack play Robin Hood and the Merry Men during the 1920s. They’re all in full persona mode and nothing is taken seriously, which hurts or helps depending on your taste. The plot involves a gang war, with Peter Falk co-starring as Guy Gisborne. But what’s more important is that it’s a musical, so Robbo (Sinatra), Little John (Martin), and Will (Davis) get to show off what they do best. Bing Crosby (as Allen A. Dale) croons the catchy “Style” with Dino and Frank, and the latter debuts what would become one of his standards, “My Kind of Town.” Radiating atomic-level energy, Davis has a great showstopper with “Bang! Bang!”—a Freudian love song to firearms (“I always feel high when a rod is nearby”). In the end, Barbara Rush as Marian gets the upper hand. 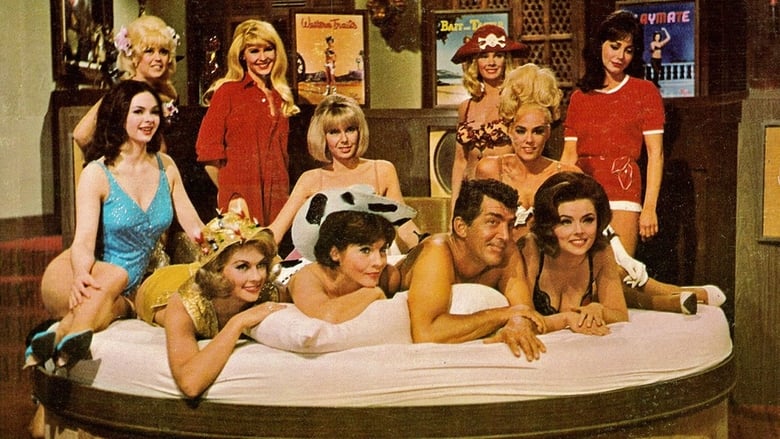 Martin plays a retired secret agent who prefers his day job as a globe-trotting photographer (cue a bevy of models)—until he’s goaded back into spying to stop an organization called the Big O. Oozing charm and menefreghista from every pore not underneath a turtleneck, Martin hones his tippling playboy persona. The movie is fairly lurid, but Stella Stevens does well in a comic role. Pulp writer Donald Hamilton wrote almost 30 Matt Helm books, but the movies—broad spoofs of James Bond—were only loosely based on them. Three sequels followed: Murderers’ Row (1966), The Ambushers (1967), and The Wrecking Crew (1968). A fifth movie was planned, but Martin opted not to return, reportedly in despair over the brutal murder of Sharon Tate, his co-star in the last film. 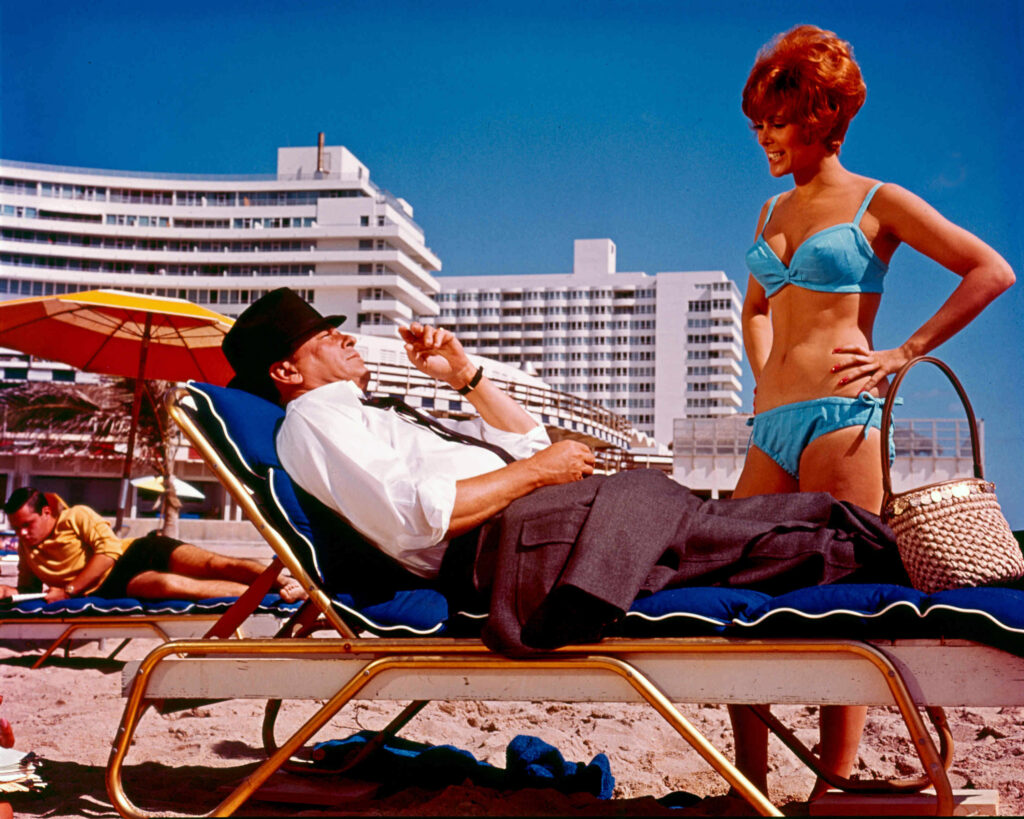 Sinatra was known as a one-take actor and Gordon Douglas was known as one-take director. It’s not quite De Niro-Scorsese, but it’s an actor-director marriage made in heaven because again Sinatra was multitasking, filming this in Miami during the day while performing at the Fontainebleau Hotel at night. Ol’ Blue Eyes plays private eye Tony Rome, a sort of Travis McGee by way of Hoboken, living on a boat in Florida, surrounded by the scantily clad, based on Miami Mayhem by Marvin H. Albert. What we get is your average wisecracking PI story, if a bit more violent and vulgar, with Rome hired to find a rich woman’s jewelry. Featuring Jill St. John, Rat Pack “mascot” (sigh), in a showy role. Followed by one sequel, Lady in Cement, with Raquel Welch in a similarly showy role, in 1968. 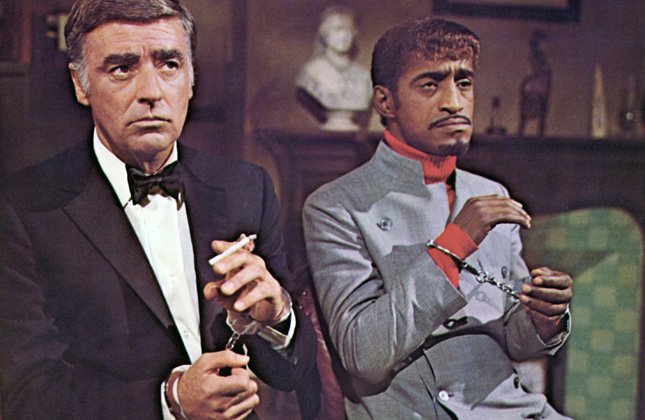 While Davis could certainly act when he wanted to—for that, see A Man Called Adam (1966)—many of his Rat Pack-adjacent works show him doing more mugging than Method. And Lawford is, as always, no more or less than a poor man’s David Niven. In this Richard Donner-directed madcap spy parody, Davis plays Charlie Salt and Lawford plays Chris Pepper—get it?—owners of a nightclub in Swinging ’60s London who stumble on a plot by extremists to take over the country using a nuclear submarine. More freewheeling than any other movie in the Rat Pack oeuvre, which is saying a lot, Salt and Pepper spawned a sequel, One More Time (1970), directed by decidedly non-Pack member Jerry “Hey, lady!” Lewis. 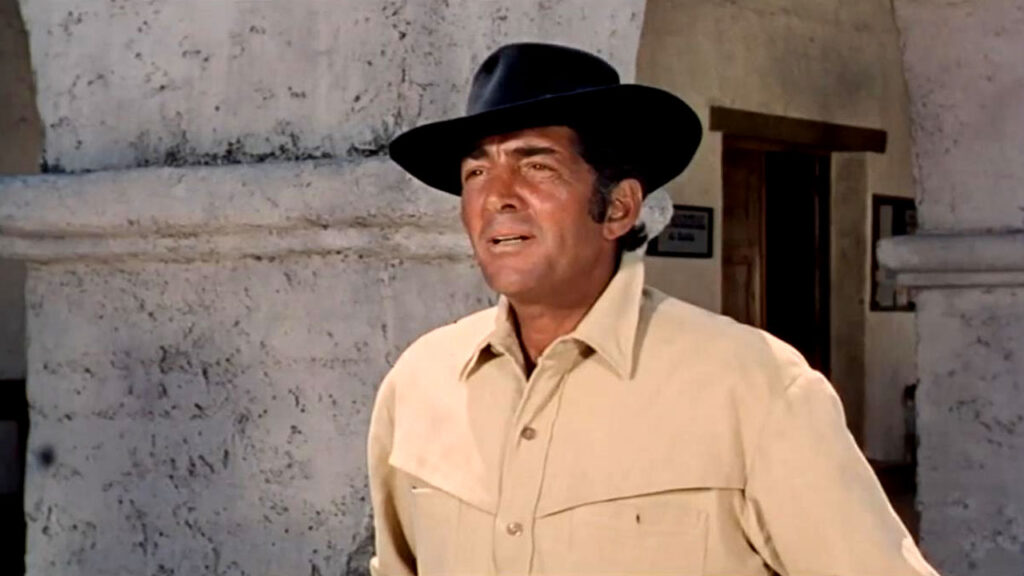 This murder mystery Western is so close to being a good movie. A card cheat at poker is lynched by the other players, and unable to stop them, Van Morgan (Dean Martin, nicely underplaying his persona here), leaves town. But soon the lynchers/players are being killed off one by one, and it’s up to Morgan to find the culprit. Robert Mitchum, riffing on (and dressed exactly as) his psychopathic preacher character in The Night of the Hunter (1955), costars. Based on Glory Gulch by Ray Gaulden, this bogs down about halfway through, but it’s still good Saturday afternoon viewing. Apparently, Mitchum turned down the lead role in The Wild Bunch (1969) in order to make this film. Ain’t that a kick in the head. 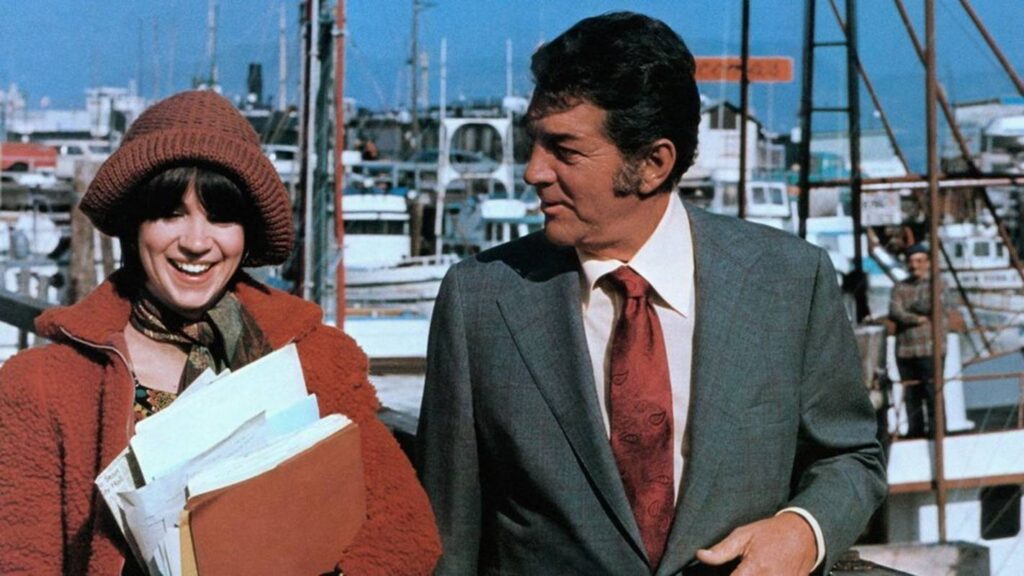 Dino plays San Francisco attorney Joe Ricco, a lawyer hired to defend a black militant accused of murder. He’s successful, but then someone keeps trying to kill him. Martin sets aside the persona and turns in a convincing performance as a lonely widower. Who golfs, of course. There are hints that this could have been an affecting ’70s-era character study. Plus, there’s a great dog bit. But what we get is gritty grindhouse, with violent fistfights and a bizarre end twist. Martin’s fabulously successful variety TV show had recently ended, as had his second marriage, so maybe he did this for the ducats. But it’s still a welcome throwback to movies such as Young Lions (1958) or Toys in the Attic (1963) that showed the range of Martin’s talent. 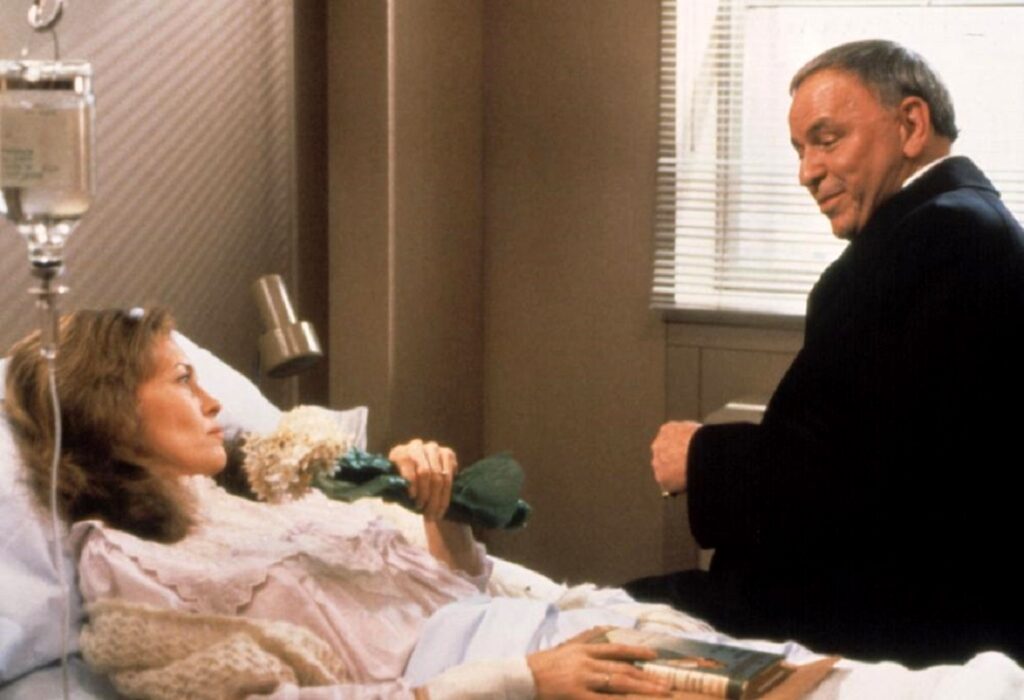 Sinatra really liked playing cop. (Apparently, he was originally cast as Detective Harry Callahan in Dirty Harry.) In his solo roles, he didn’t phone it in—he wanted to be taken seriously. And he does a good job as basically the same tired cop type in The Detective (1968) as well as in Contract on Cherry Street (1977). But it’s in this Edgar Award-nominated thriller, based on the Lawrence Sanders novel, where it works the best. He plays NYPD Sergeant Edward X. Delaney (a character previously played by Ralph Meeker in 1971’s The Anderson Tapes), a troubled veteran homicide detective with an ailing wife (Faye Dunaway, who spends the movie in a hospital bed) on the trail of an ice axe killer. It’s slow, moody, downbeat, worth a watch. 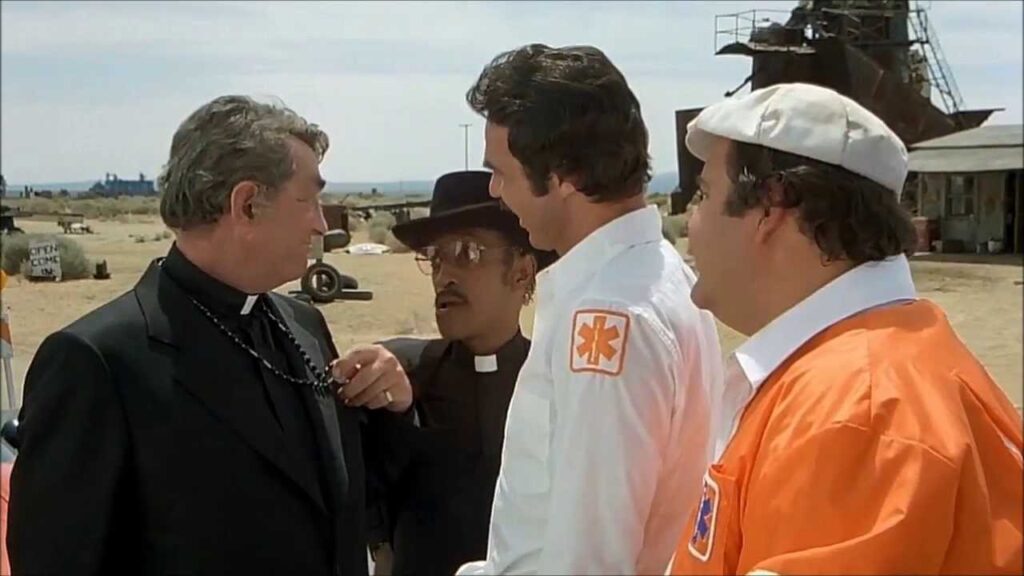 At this point, 21 years after the Summit, Rat Packers are relegated to roles akin to guest stars of a certain age on The Love Boat. It’s a Burt Reynolds car movie more than anything, and Martin plays boozy former race driver Jamie Blake and Davis his gambling addict partner, Morris Fenderbaum. They disguise themselves as Catholic priests to compete in an outlaw road race across the country. The movie did extremely well—enough for Sinatra to want some of that afterglow. He joined them in the sequel, Cannonball Run II (1984), as himself. Both movies are zany nonsense, and the latter movie was Martin’s last on-screen appearance. Still, it looks like the fellas had fun getting together again. 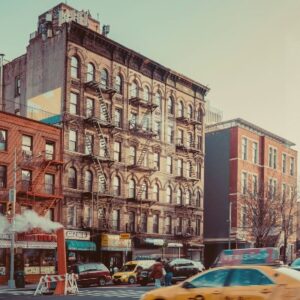 The Lower East Side, the downtown Manhattan neighborhood south of East Houston Street and east of Bowery, dramatically showcases...
© LitHub
Back to top