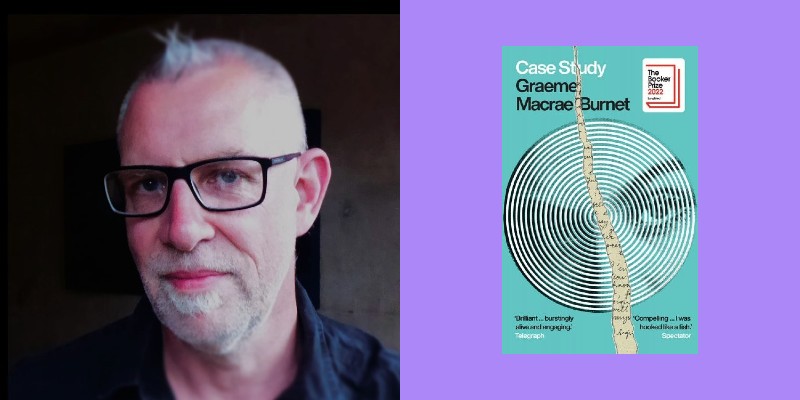 Lily Meyer talks with the Booker-nominated author about his new mystery, Case Study

Graeme Macrae Burnet’s Booker-nominated novel Case Study is a crime story in search of a crime. It takes the form of a set of notebooks written by a nameless young woman in early-1960s London who is convinced that a charismatic, countercultural psychotherapist named A. Collins Braithwaite has murdered her sister, Veronica, by convincing her to commit suicide. Burnet intersperses the notebooks with a pseudo-biographical account of Braithwaite’s life, gradually making clear that, although Braithwaite is in many ways a repugnant figure, he did not kill Veronica. The notebook writer’s sleuthing—which leads her to enter therapy under an entirely assumed identity—is in vain.

If it seems I’m giving away a major plot point here, forgive me, but know that Case Study is hardly a book powered by plot. Instead, Burnet propels readers through the novel with his fierce, hilarious intelligence. Braithwaite’s life is a tragicomedy; the notebook writer’s, even more so. Although her conviction that she has to solve her sister’s murder is often heartbreaking, her narration—full of suppressed sexual fantasies, harsh judgments, and luminous weirdness—is blisteringly funny. I spoke to Burnet about writing comic fiction, playing with the absence of crime in a crime-adjacent novel, and the similarities between detectives, novelists, and psychiatrists.

Lily Meyer: When you were writing Case Study, did you have a certain reader or reading experience in mind?

Graeme Macrae Burnet: I don’t think about the reader because every reader is different, and every reader has a different response to any book they read. They bring their own reading history to it. They bring their own life experience to it, and they interpret the book according to how it relates to them. So I think as a writer, it’s really kind of pointless to think that you’re writing for a particular reader or to even hope to have a certain response. That said, while I don’t imagine a sort of ideal reader, I suppose that there are certain responses I would like the reader to have. I’d like readers to finish the book with a feeling of Oh, shit, maybe I was reading something other than what I thought I was reading.

LM: I love the pairing of humor and crime in general, and I love it in Case Study. How do you approach that combination?

GMB: I don’t really analyze using humor. I think it just evolved. At one point when I was writing the book, maybe a third of the way through, I was like, Oh my God, I’m writing a comic novel! I didn’t want to write a comedy or a comic novel. I thought it was becoming too funny.

LM: What does ‘too funny’ mean to you? Or what was that fear about?

GMB: My fear was that if I was using the notebook writer’s voice only to be funny, the humor could detract from the more serious and aspects of her character and her plight—she constructs a fake persona, sinks into a depression, really serious stuff. I was afraid of losing my balance.

LM: What was your starting point when beginning to write Case Study? And how did you decide to split the book into two narrative strands?

GMB: In terms of subject matter, I’ve read psychiatric case studies for many years. I’ve always been interested in that kind of material—but the more I read, the more I came to doubt the truth of what I was reading. Because a case study is written by a narrator, the therapist, and you don’t know how much you can trust that narrator. I began to wonder more and more how these encounters would appear if they were narrated by the other participant, the patient. So that was the origin of the notebook writer’s side of the book.

Some of the book also came from R. D. Laing’s The Divided Self, which appears in Case Study. The Divided Self is about how we adopt personae in different parts of our lives, which Laing would say is perfectly normal unless your persona overwhelms your original true self. My character, Braithwaite, would say there’s no true self, just persona—but to me, A. Collins Braithwaite, the therapist, is a persona invented by Arthur Collins Braithwaite, the character I invented and wrote about. Anyway, Laing’s ideas about the divided self fed into the book being divided into two parts, each of which is about a character who’s divided into two personae.

LM: I know from other interviews that you read a lot of sixties women’s magazines as you were developing the notebook writer’s voice, which is very prickly and repressed. She can’t stand what she calls Modern Independent Women. How, besides magazine research, did you construct and inhabit her personality?

GMB: Well, she’s very afraid. For example, she’s tremendously curious about sex, but simultaneously scared of it. Also, I really did find those women’s magazines crucial, especially the short fiction in them. Almost universally, the stories were about finding, keeping, and pleasing a man.

If you look at the canonized literature written by women in the sixties—if you read Doris Lessing and Iris Murdoch—you’d think that women in that era did nothing but discuss whether to join the Communist Party. But actually what women were being encouraged to read at that time was about being a good wife or good girlfriend. I think the character’s attitudes were absolutely informed by reading that kind of short fiction.

Also, everyone’s heard of swinging London, but if you read the social histories of the sixties in London, you see that London was not swinging. It was swinging for a tiny number of people. Everyone else had retrograde social attitudes towards homosexuality and extramarital sex. So the notebook writer reflects this kind of more postwar attitudes, rather than what we associate with the sixties.

LM: Do you see the role of a psychiatrist as similar in any way to that of a detective, or of a novelist? Crime fiction writers, especially, so often psychologize their characters—you get murderers who are psychopaths, for example.

GMB: Well, let’s start with my first novel, a crime novel called The Disappearance of Adèle Bedeau. Adèle Bedeau is a waitress in a small French town and she disappears at the beginning of the book. It’s a conventional mystery, with a suspect and a cop and so on—except that in a really conventional crime novel, we’d find out what happened to her. In my book, she just comes back and we never find out where she’s been.

All my books share that lack of resolution or explanation. I don’t like neat explanations, and psychological ones are often too tidy for me. They give the reader nothing to think about when the book is over. I want to put my readers in a more active position where they have to think through what’s going on. I want readers asking, What’s the relationship between these two characters? Is this character sane or insane? So for me, the reader is the detective or the psychiatrist, not the author.

LM: One of the central questions in Case Study—a central question the reader has to ask—is whether a crime has even been committed. Did Braithwaite do anything wrong? I find that such a fascinating approach.

GMB: Well, the notebook writer believes that Collins Braithwaite has driven her sister to suicide. She feels the need to investigate it, so the book sets out from a conventional investigative structure. It’s a classic detective-novel setup, really: I’m doing this because I want to find something out.

But as the novel continues, my character becomes less interested in her investigation. At that point, I wanted to use the sections about Braithwaite to create tension—since it becomes clear that a total bastard. He’s what we’d now call a toxic male, and he exhibits all kinds of unpleasant behavior. Once the reader knows more about Braithwaite than the notebook writer does, I hope readers are becoming more fearful of what he might be capable of doing to her.

GMB: Of course! Writing a character so larger than life is fun. I mean, there are moments when he says things so vile that I did not feel great about writing them. But I loved writing his carousing and his monstrousness. What became a challenge was to try to make the reader care about him in the end, which meant I had to begin to care about him. I had to become moved by his plight.

The surprising thing to me, since the book’s come out is how many readers, especially female readers, have said that they actually find him really attractive. I would never have imagined that any reader would find him anything other than completely repellent. But some readers do, absolutely. Some find him a 100% horrible, toxic, unpleasant character, and other readers quite like him.

GMB: I never thought about that, but you’re right. Both of them are consumed by envy. Braithwaite, especially, wants to be the big alpha male—and that’s what Laing was. There’s a great story about Laing, which is that he’d set up this radical, experimental therapeutic community in London, and everyone was coming to visit. Edna O’Brien visited, Sean Connery visited—and this was at the height of his James Bond fame. He’s a big guy, too, 6’4” or so, and Laing challenged him to a wrestling match. That’s just so, I’m going to be the alpha male in this room. I don’t care if you’re James Bond. I wanted to give Braithwaite that same trait of needing to compete with other males.

LM: It’s great for me, as a female critic, to read a novel by a male writer who so consciously undermines and plays with gender and with alpha masculinity.

GMB: Somebody once said that all my novels were a critique of masculinity. My male characters tend to be either sort of inadequate or they’re traumatized by having to behave like men. Braithwaite’s not like that. He’s an alpha male—complete with bullying and sexual pressuring of women. Yet even he’s acting out roles that, deep down, he doesn’t feel he fits into.

And then, though I tried not to think about it too much, I was conscious of the fact that I’m a man writing a female character. I know some people might think I shouldn’t do that—which is fine! But I was aware that I’m creating an individual fictional character with her own individual voice, not trying to say something sweeping about women in the sixties. I’m just making stuff up.

LM: It also seems to me that if men are going to live in a world that’s 50% women, writing about women in a nuanced way is an important skill.

GMB: Agreed. And besides, I think it’s important to write with as much freedom as you can.

LM: Speaking of freedom! I know you’ve been loyal to Saraband, the British indie press that’s published all four of your books. Could you tell me how you feel about working with indies?

GMB: I’m kind of an indie author, I think. In the United Kingdom, indies are way ahead at the moment in terms of translated fiction, especially. If you look at the Booker International Prize, very often the long- and shortlists are dominated by smaller indie presses who have less sales pressure to worry about. And for me, it’s really important to have a longstanding relationship with Saraband, my publisher. I feel the freedom to write what I want. 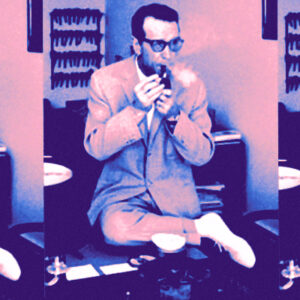 Here’s a mystery. At the end of the war, as exiles, soldiers, and refugees return to their liberated country, one man leaves,...
© LitHub
Back to top