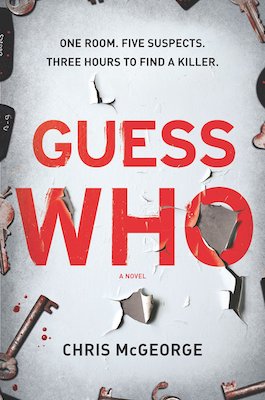 The following is an exclusive excerpt from Guess Who, a new thriller from Chris McGeorge. In this Twilight-Zone-esque story (that’s also very much influenced by the gaming generation), several strangers find themselves mysteriously imprisoned and forced to play a very dangerous game.

A face at the end of the bed. Blonde. A girl—twenties. Looking like he felt—confused and pale, her eyes filled with panic. She looked around first, her head rocking around on her neck, and then she saw him, rapidly ducking down again in surprise.

“H-Hey,” he tried to say. His voice was cracking in all the wrong places, making it sound like more of a threat than a greeting. He tried again. “Hey.” A bit better that time.

The girl surfaced—just her eyes. They flitted to his handcuffs. They looked even more confused. But hey, he wasn’t going anywhere, so maybe that helped her stick her head up again.

“What—? What’s happening? Where am I?” Her voice was small and scared. “What did you do to me?”

He looked at her, shocked. “I woke up here, just like you.” He clanged the handcuffs to corroborate. It worked. There was something new in her face—understanding. For a moment, they were locked in each other’s gaze, sharing their fear.

There was more stirring around her on the floor, and her eyes drifted down. He couldn’t see. But whatever she saw made her jump up and back. Her hip collided with the desk and the room service menu toppled over. She gave a small, curt squeal.

He could see her more clearly now. Jeans. Light yellow hoodie. Just your average girl. As he looked, he saw that there was something on her left breast. A sticker of some kind. “More people,” she said, gasping. “There’s more people.”

“I know.” Speaking was becoming easier, like an engine rolling over and starting up. “How many?”

“I need to know how many.” Why? Why was it important? Maybe because every extra person would make this so much worse.

“I need to know how many.” Why? Why was it important? Maybe because every extra person would make this so much worse.

Upon hearing his voice—his full voice—something must have sparked in her mind. She looked at him—her eyes wide and full. That look he saw nearly every day.

Don’t I know you? This was only going to delay things. He always existed on the fringe—he wasn’t recognizable at a glance but a double take would do the job.

“I think so. They’re moving—the woman and the girl anyway. I don’t want to check.”

“No, no, you need to get to the door, okay.” He was losing her again—she was shaking her head. Hysteria—the enemy of progress. He took in a deep breath. “Just get out of here. Go and get help. You need to go and get help, okay?”

“What is this?” she said, her eyes darting around the floor. He was glad he couldn’t see what was there.

“I don’t know—but please, the door.” He was almost pleading. What had he been reduced to already?

Can’t wait to see what you do next.

The girl kept her eyes up, not looking at the floor. She made his way across his vision, toward the alcove. She must’ve been able to see the door. He was right about where it was. Of course. The girl made two exaggerated movements, side to side. She was dodging bodies. He didn’t have to be able to see them to know. She disappeared from view into the alcove.

He leaned on the cuffs, forward this time, and craned his neck, but he couldn’t see her. He heard her try the door, fumbling with the handle. The shake of it. But he didn’t hear the door open. Why did the door not open?

Another sound. Another scraping. The girl was trying the lock—the physical one.

“Do you see anywhere the key card could be? Like a holder on the wall to activate the lights?”

“Look through the peephole,” he said, “someone might pass by. There may be…” Someone. Anyone.

A beat. And then, “I just see the corridor.” Banging. She was banging on the door. Bang. Bang. Bang. She kept at it, louder and louder, until it sounded like she was punching the door. “Hey. We’re trapped in here. Someone! We can’t get out.”

And above the banging, he heard and felt something else. Another presence. A mumbling. As if someone was whispering by his right ear. He turned and looked into the eyes of an old woman with blankets of long black hair. They looked at each other, and he wished he was able to block his ears, as she began to scream.

From GUESS WHO. Used with the permission of the publisher, Hanover Square Press. Copyright © 2018 by Chris McGeorge.

The Dystopian Realities of The Feminist Thriller 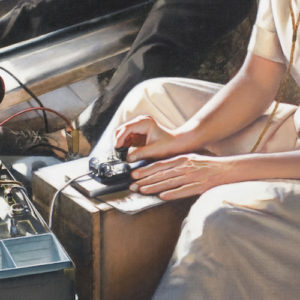 The Women Spies of Historical Crime Fiction For far too long female spies in fiction were given the short shrift. Typecast as either a Mata Hari type seductress or a martyred...
© LitHub
Back to top