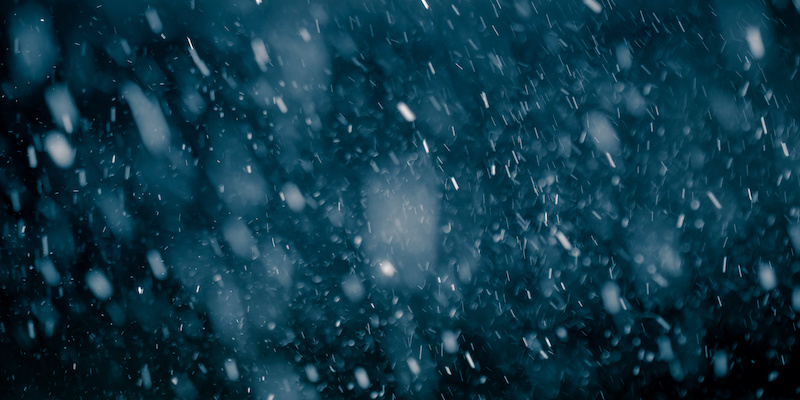 "As a result, Two Truths and a Lie has far more truths than lies."

My career as a thriller writer began the night my life almost ended—the night a stranger broke into my apartment while I was in the shower. While I escaped unscathed, that event made me obsess about what I could do if something again went terribly wrong. Eventually I started giving those problems and solutions to characters. Then in 2019, real life handed me a book idea when I was trapped by a blizzard with a group of strangers in a strange old motel.

It all started in 1982, when I moved to Portland to finish college. My apartment complex had been carved into a steep hillside. The hill was held back by a retaining wall a few feet behind the apartments. Over the decades, the building had shifted, and my unit’s bathroom door no longer fit completely in the frame. But it didn’t matter, because I lived by myself.

That year, everyone was doing the Jane Fonda Workout, and I was no exception. And like everyone else in those apartments, I didn’t have curtains on my back windows. Why bother when there was only a retaining wall back there?

That night, as I did my donkey kicks, I head rustling outside. Raccoons, I figured, glancing at the black square of the dining room window. Finished, I turned off all the lights, went into the bathroom, stripped, and got in the shower. After sticking my head under the spray, I heard a new noise. A rusty squeal.

It sounded like someone forcing open my kitchen window.

I turned off the water and stood dripping in silence. Then I heard stealthy movements in my kitchen. I was naked and shivering, staring at a door that didn’t truly close, let alone lock. The bathroom’s window was not only painted shut but too small to climb out of.

Getting out of the shower, I pulled on my leotard. I stepped into the dark hallway and asked, “Who’s in my kitchen?”

No answer, but I could hear a man. Breathing.

A little voice inside my head said, “You’re an idiot! Get out of here!” I ran past the kitchen, through the living room, and out the front door. I was too frightened to reach back into the darkness to close it.

I pounded on my law-student neighbor’s door. He answered in his underwear, releasing a cloud of pot smoke. “I’ll call that new emergency number!” he shouted. “1-1-9!”

After he called, he ran around opening all the windows and waving his arms, trying to dissipate the smell. And when the two cops showed up—a man and a woman—there we were, me in my damp leotard and my neighbor in his tiny black briefs. It was almost funny.

The cops searched my apartment and found no one. As we talked in my living room, we heard a thump in my bedroom. Both cops drew their guns. It was like a bad movie, because in walked—my cat. Which was also kind of funny.

The cops asked me to check if anything missing. I didn’t own a lot. The only thing the guy had taken were my dishtowels.

“Why not take my salt shaker?” I joked to one of the cops. “Or my pancake turner?”

“Ma’am,” he said, his eyes drilling into mine, ”he was planning on tying you up with them.”

I spent that night at my boyfriend’s (now husband’s) apartment, and moved out shortly thereafter. The person who broke into my apartment was never caught.

I was very lucky.

But ever since then I’ve thought about the girl I could have been. Tied up with her own dishtowels. Certainly raped. Probably murdered.

While writing this piece, I checked Portland cold cases. Two unsolved murders from 1982 were of women who lived alone and died in their apartments. One was another Portland State student who lived three miles from me. She was beaten to death. Staring at her smiling photo on Find-A-Grave, I wonder if I could have been her.

As time went on, I channeled my angst into books. My characters found themselves kidnapped, handcuffed, stalked, or thrown into car trunks. But they always figured out how to outwit the villain.

Cut to a couple of dozen books later, February 2019. I was speaking at a Midwest children’s literary conference. The hotel was an odd, sprawling monstrosity, so confusing that the front desk showed you a map before sending you on your way. To get to your room, you passed an indoor tiki bar, complete with a roof made of palm fronds. At one point the hotel had been added onto, so the room numbers were no longer in order. There was no signage, and the hallways were endless and identical. Adding to the feeling of unreality, the hotel was decorated with dozens of the same exact painting. There were two in my room, and in the main hall you passed another every twenty feet or so.

Stuck in the hotel, I paid little attention to the weather. On Saturday, I finished my lunchtime keynote and then went to the previously bustling vendor area to sign books. At first I thought I had made yet another wrong turn, because now it only held empty tables.

The lobby was filled with people leaving. I head the word “blizzard.” Anyone local was getting out while they could. My flight wasn’t until the next morning, and I had an afternoon panel. Those of us who hadn’t fled spoke to five people in a room set for over a hundred. Even our moderator had left.

My departing flight was cancelled and not rescheduled. In fact, anyone relying on a plane was going to be out of luck for days. At the next morning’s continental breakfast—the only meal that the hotel served—I tucked a bagel and a packet of instant oatmeal in my pockets.

Those of us from out of state started strategizing. A teacher who lived nearby and followed me on Twitter saw my sad tweet about being stuck in the hotel. She messaged me some advice. And through her kindness that progressed to her offering to pick us up in her four-wheel drive SUV and drive us to a bigger town. The weather got steadily worse, and we crept along for hours in whiteout conditions. Right after we finally got off the highway, the authorities shut it down as the result of a hundred-car accident.

While still on that trip, I knew I was going to write about a group trapped at a strange motel, but with teenagers as the main characters. Real life gave me so many details that went into the story: the endless unmarked corridors, the paw prints of a wildcat just outside a window, the duplicate paintings, the tiki bar with a thatched roof, and what it was like to drive through a blizzard.

Of course, I added my own touches: an unsolved double murder, a faked hanging, a message written in blood, a bomb, and an ouija board.

I often use Facebook to crowdsource ideas (names of towns, teens, stores) and I asked what school teams might travel. When someone replied that theatre troupes travel for acting competitions, I immediately knew at least one team would be actors. Actors are good at staging scenes, at making lies look like truths.

Wanting to get the details right, I reached out to experts. I have really good luck cold-emailing, cold-tweeting and even cold-Facebook messaging contacts. Experts generally love their jobs and enjoy talking about what they do.

After buying a DVD of Thespians, a documentary about a regional high school competition, I managed to track down one of the actors, Melanie Neu, all grown up now and living—and acting—in Italy. She had vivid memories of being a teen actor.

Through more googling, I came across Tracy Nunnally, owner of getvertigo.com, and an expert in theatrical rigging. Over FaceTime early in the pandemic he demonstrated how to fake a hanging using his phone charging cord and a Hershey’s syrup bottle. Later, his shop rigged up the exact scenario for me and sent me photos.

Jeremy W. Flood, a costume designer and expert on all things theater, explained how stage blood would look and even taste.

When I wanted to know about explosions, I tried emailing a woman who had written a few articles with interesting tidbits about bombs. She suggested I seek out Rachel Lance, PhD, a professor at Duke University. Rachel’s an expert in blast trauma—and also gave me some hints on how to make things explode.

I also got advice from a fire captain, a first aid instructor, and the CEO of a high-security door company.

As a result, Two Truths and a Lie has far more truths than lies. And I’m looking forward to real life handing me another book idea. 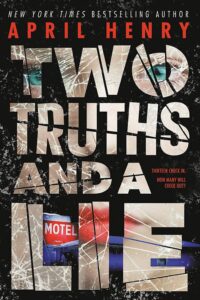 April Henry is the New York Times bestselling author of many acclaimed mysteries for adults and young adults, including the YA novels Girl, Stolen; The Night She Disappeared; The Girl Who Was Supposed to Die; The Girl I Used to Be, which was nominated for an Edgar Award and won the Anthony Award for Best YA Mystery; Count All Her Bones; The Lonely Dead; Run, Hide, Fight Back; The Girl in the White Van; Playing with Fire; Eyes of the Forest; and The Body in the Woods and Blood Will Tell, the first two books in the Point Last Seen series. She lives in Oregon. April invites you to visit her at aprilhenry.com. Her latest YA mystery, Two Truths and a Lie, is now available.

While last year was the year of great gay thrillers, this year brings something wholly unexpected: the rise of queer rural...
© LitHub
Back to top