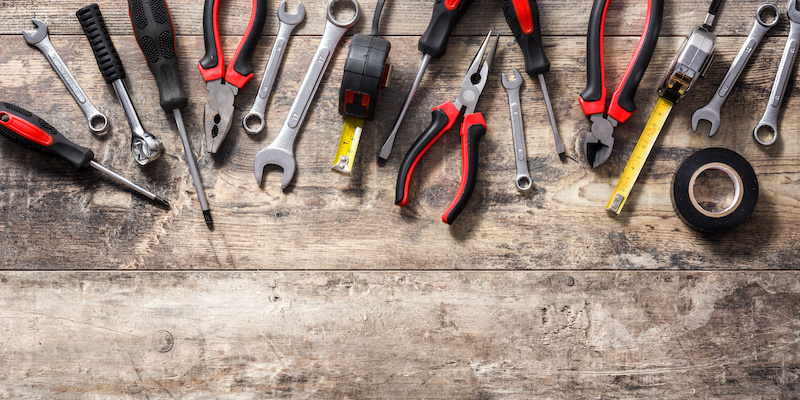 If you're addicted to the Home Improvement Channel, try these fixer-upper cozies!

As a cozy author, I’m excited to share with readers my debut, Renovated to Death: A Domestic Partners in Crime Mystery. In the book, real-life domestic partners, PJ and JP, host their own home renovation TV show, the aptly named Domestic Partners. But when one of the owners of the 1920’s Tudor Revival they’re currently working on is found face down at the bottom of a rickey old staircase—dead—it’s soon up to the partners to help solve the man’s murder.

It wasn’t until I’d started the research phase in my writing that I made a discovery: I wasn’t the first author to feature the topic of home renovation in my work. While none of the following books includes a queer millennial couple like mine as its main characters, fans of Property Brothers, Inside Out, and my personal HGTV favorite, Rehab Addict (with fellow Detroiter Nicole Curtis), will find something to enjoy in each of these fun cozy mystery series. 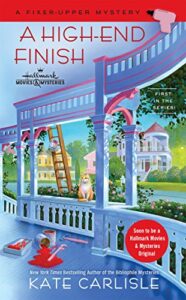 A High-End Finish: A Fixer-Upper Mystery, book 1 by Kate Carlisle

In this New York Times bestselling series, contractor Shannon Hammer lives in the seaside town of Lighthouse Cove, California. While her home renovation and repair business is booming, Shannon’s love life could use a little work. After a bad blind date with a local real estate agent, the guy is found dead in a run-down Victorian that Shannon’s been hired to rehab. Soon, Ms. Hammer finds herself the prime murder suspect when Lighthouse Cove’s handsome new police chief learns of the threats she made after the guy got handsy with her.

Taking on the task of conducting her own investigation, Shannon enlists her four best friends, her eccentric father, a couple of nosy neighbors, and an attractive crime writer, all determined to help our heroine clear her good name.

As of this writing, there are a total of 10 books in the Fixer-Upper Mystery series and a dramatic adaptation for the Hallmark Movies & Mystery channel starring the singer Jewel. 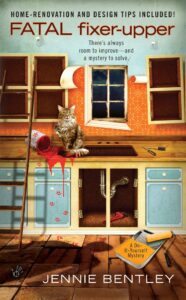 No relation to my partner Craig, Jennie Bentley’s cozy series boasts a total of 7 books. In the debut, a designer named Avery Baker learns the ins and outs of DIY from handsome handyman Derek Ellis. Together, the couple begins fixing up homes…before stepping in to help solve the mysterious disappearance of local professor.

Other books see Avery and Derek flipping a supposedly haunted house (book 2: Spackled and Spooked), Avery moving from New York City to Maine and renovating her aunt’s old island cottage, only to find a mystery hidden behind the century-old walls (book 4: Mortar and Murder), and Avery and Derek discovering a scary surprise inside an antique crate that they discover up in the attic of the Craftsman Bungalow they’re working on. 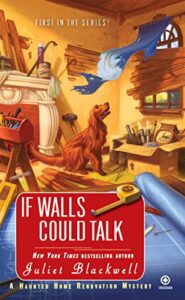 If Walls Could Talk: A Haunted Home Renovation Mystery, book 1 by Juliet Blackwell

Happening upon this series, I was both excited and annoyed. Currently, I’m in the outlining stage for my third book in the Domestic Partners in Crime series, tentatively titled Haunted to Death. So, to see that the subject of renovating a haunted house had already been done made me feel a tad disappointed. But, in the world of cozy mysteries, there’s always room for a new book on an old topic!

Another New York Times bestselling series, this one focuses on Melanie Turner, a woman who has made a name for herself remodeling historic houses in the San Francisco Bay Area. As she takes on a run-down Pacific Heights mansion, Mel (as she’s called) is visited by the ghost of a dead colleague who recently met his demise. Mel hopes that by tracking down his killer, she can rid herself of the ghostly presence of the murdered man. The trick is to solve the crime before becoming a construction casualty herself. 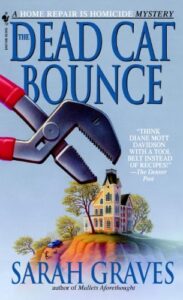 On a break from agonizing over rotting floor joists and sagging support beams in her old fixer-upper of a house, Jacobia Triptree stumbles upon a dead man with an ice pick crammed into his head in her storeroom. Soon, everything changes in sleepy Eastport, Maine. Turns out the deceased is a world-famous corporate raider-turned billionaire, and Jacobia’s bestie Ellie confesses to his killing.

As the cops and journalists from all over swarm into town, Jake (as she’s called) begins to smell a cover up. But poking into the dead man and her best friend’s past history causes someone to not like what she’s doing. Will Jake’s rustic refuge become her final resting place?

With a total of 16(!) books, author Graves will keep readers on edge as amateur sleuth Jacobia Triptree, who formerly worked on Wall Street (hence the title of book 1—dead cat bounce is stock market jargon for “a small, temporary rise in a stock’s trading price after a sharp drop”), solves a series of crimes, along with the help of her best friend and her own teenage son. Jake and Ellie also continue their adventures in the spin-off Death by Chocolate Mysteries as owners of The Chocolate Moose, a waterfront bakery in Maine. 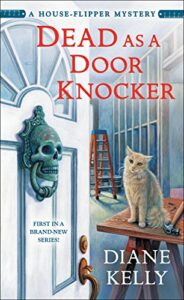 Dead as a Door Knocker: A House-Flipper Mystery Series, book 1 by Diane Kelly

The real estate market is to die for in this cozy series set in Nashville. When it comes to taking an eyesore and giving it curb appeal, Whitney Whitaker knows how to flip a house. After purchasing a cheap piece of property from a client, Whitney’s passion for renovation becomes a mystery to her pet cat Sawdust. When a dead body turns up in the flower bed in Whitney’s new old house, she joins forces with police detective Collin Flynn to unmask a killer.

4 books total make up this series. Additional titles include Dead in the Doorway, Murder With a View, and Batten Down the Belfry, with each one featuring a cute little kitty on the cover! 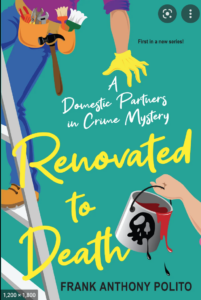 Frank Anthony Polito is the Lambda Literary Award-winning author of Band Fags! and Drama Queers!  He holds an MFA in Dramatic Writing from Carnegie Mellon and a BFA in Theatre from Wayne State. His debut cozy mystery Renovated to Death has been featured in CrimeReads’ “Time to Curl Up with a Quozy—A Queer Cozy Mystery” and is on sale May 31, 2022. After growing up in the Detroit suburbs, Frank lived in New York City with his partner Craig Bentley before moving back to Michigan in 2013. The couple now lives in historic Pleasant Woods with their two rescue dogs, Jack and Clyde, in a 1924 Craftsman Colonial that they purchased on HGTV’s House Hunters and have been renovating together ever since. He can be found online at www.frankanthonypolito.com 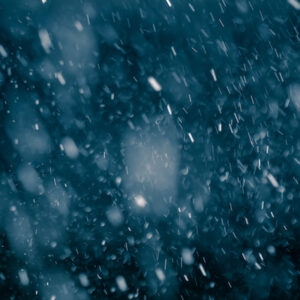 My career as a thriller writer began the night my life almost ended—the night a stranger broke into my apartment while...
© LitHub
Back to top