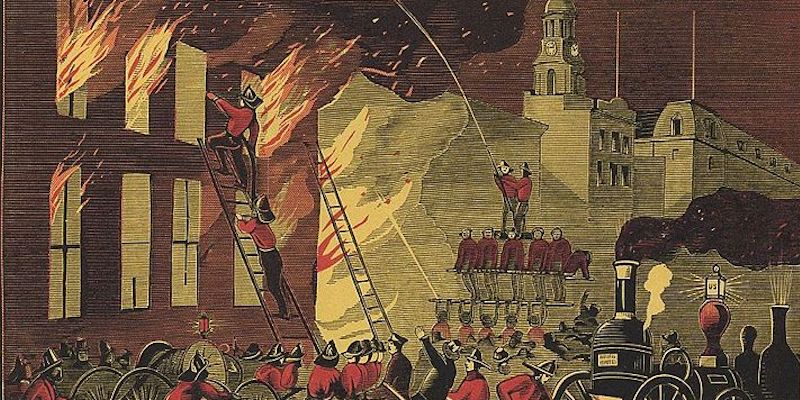 When America finally saw off the last of the King’s soldiers in 1783, it decided that many of the King’s laws should go with them. That included sentencing people to death for a wide range of crimes, including manslaughter, rape, sodomy, perjury, counterfeiting and adultery. The death penalty was “cruel and unusual”, and an abhorrent tool of an oppressive government, the founding fathers decided.

They consolidated their distaste for capital punishment in the Bill of Rights and the Eighth Amendment. States quickly began banning the death penalty for everything but murder and treason, and putting convicted criminals in prisons instead. Pennsylvania, New Jersey, Kentucky and Virginia led the way; New York joined them in 1796.  But not everyone in the state approved. The citizens of New York City believed there was another crime that merited the death penalty: arson.

Many New Yorkers still had bad memories of the night of September 20, 1776, when a fire broke out in the Fighting Cock Tavern on Whitehall Slip. A steady wind fanned the flames spread the fire north and west. By the time it was out, nearly 20 percent of the city’s buildings had been reduced to ashes.

The rest of the state of New York, they pointed out, was mostly small towns and villages. Nowhere else had the kind of density of housing and population as the higgledy piggledy mess of streets and alleys and wharves and warehouses crammed into the tip of the island of Manhattan. Moreover, while a variety of materials was used in construction in American cities at the turn of the 19th century, most buildings were made entirely of wood.

Such a high density of combustible material made New York a dangerous place, not least because there was hardly a building in the city that didn’t have a fire going in it at some point in the day: fireplaces to heat private homes and public places; kitchen fires to cook food; metalworkers and smelters fires; blacksmiths’ fires; coopers’ fires; brewers’ fires; tanners’ fires; fires on the docks to melt pitch to caulk ships; fires on the streets to warm the food that hawkers sold to the public. Not to mention all the candles and oil lanterns that were New Yorker’s only source of artificial light. The city was perpetually shrouded in a cloud of pungent woodsmoke, and in constant danger of bursting into flame. All it took was a stray spark falling onto a pile of straw, a candle knocked against a curtain, or a burning log rolling out of an unattended fire, and New York could burst into flames.

All it took was a stray spark falling onto a pile of straw, a candle knocked against a curtain, or a burning log rolling out of an unattended fire, and New York could burst into flames.

Small wonder New Yorkers were obsessed with fire: far more so than most other crimes. The city didn’t have a police force until 1845. But it had a fire watch from the day it was founded. At the turn of the century, the city boasted 27 engine companies and two hook-and-ladder companies. Every house had a leather bucket hanging inside its hallway. Everyone knew where to find water to fight a blaze. A fire in the daytime could mean warmth and cooked food and industry and commerce. A fire at night could mean chaos and ruin. And death.

To many New Yorkers, then, arson was a crime worse than murder. Murder was a directed crime, with limited impact. Arson, on the other hand, was indiscriminate, and could result in multiple deaths. A man might set light to a particular man’s house or place of business, but the arsonist had no way of knowing what the end result might be, how much the fire might destroy and how many lives it might end. For that reason, arsonists were feared, and rumors about insurrectionists, rioters or other undesirables often cast them as arsonists plotting to burn New York City to the ground.

This wasn’t just a flight of fancy. When nearly half the city of New York burned to the ground in 1776, arsonists were blamed. Marines who fought the blaze were reported saying they saw men setting fire to buildings in the city. The Governor, Lord Howe, wrote to Parliament saying “a most horrid attempt was made by a number of wretches to burn the town.” Even after the British had gone, New Yorkers were afraid of insurrectionists and anarchists. But they were also afraid of enslaved people, who might set fire to their owner’s property, either in anger at their treatment, or to assist in an escape. In 1794, a trio of enslaved women set fire to a building in Albany, which was, in parts, as dense as New York, and equally vulnerable to fire. The fire didn’t spread, and the women were caught. They were hanged on March 14 of that year.

Prior knowledge of the carnage that arsonists could cause made the rumor mill churn every time a fire broke out: in 1796, the Coffee House Slip fire burned 50 buildings and warehouses along the East River waterfront. Some said it was thieves trying to burn a hole in the wall of a warehouse to gain entrance. In 1803, a fire in the lumber yard of a black New Yorker named Bonsal nearly burned a nearby cathedral. The rumor was it was nativist arsonists who set the blaze, but none were ever caught. In the same year, the Vesey Street bakery of the New York Bread company burst into flames: some said it was the work of a disgruntled competitor. In 1804 a grocery store on Front Street burned down. Again, arsonists were blamed.

The fear of fire by arson was so great, and pressure on the state government so strong, that in 1808, New York State added residential arson to its list of capital crimes. Observers in Britain noted the irony that the most heinous fire-related crime in Britain was arson in a naval dockyard. The fact that New Yorkers deemed personal property more important than national security seemed to epitomize the new United States.

The addition of arson to the list of capital crimes didn’t stop the fires. As the city became more populous and dense, the fires became more frequent. And lethal. George William Sheldon’s book, The Story of the Volunteer Fire Department, describes fires in 1811, 1813, 1815, 1816, 1820, 1821, 1824, 1827, and 1828, all of which threatened the entire city and caused serious injury of loss of life to volunteer fire fighters, not to mention significant property damage. 1829 saw four major fires: on Broome Street, South Street, Mulberry Street, and at the Bowery Theater, which was notorious as a seat of fire, possibly due to all the candles required to light the stage and the auditorium. A fire in 1832 killed two firemen; a fire at the City Hotel in 1833 took seven hours to fight and nearly caused the death of every resident of the hotel; in 1834 a shop fire on Front Street killed one fireman; a few months later a fire in a shop on Pearl Street killed two volunteers, and the following year, 1835, had three major fires including the Great Fire that burned 17 city blocks, destroyed hundreds of buildings and killed two people.

Some of these fires were blamed on arsonists, but convictions for arson were comparatively rare in New York. The last man executed for arson in New York City was a black man, known only as Will, hanged in 1826. The next arsonist in the whole of New York State to get the death penalty after that was also the last: Horace Conklin, hanged in 1851 for burning down several buildings in Utica.

Within a decade of Conklin’s execution, the statute had been changed, and arson dropped from the list of capital crimes, which now consisted exclusively of murder in the first degree. By now New York’s population had exploded to a million, from just 65,000 in 1800, but the fear of fire appears to have diminished significantly, probably for a number of reasons: buildings were increasingly made of stone, rather than wood, making them significantly less vulnerable to flame; the Croton Aqueduct, which was completed in 1842, and provided a reliable water supply throughout the city, made fires easier to fight; the New York Police Department, created in 1845, patrolled the streets, made citizens feel safer, and presumably acted as some kind of deterrent to any would-be arsonists; meanwhile the Fire Department, while still a volunteer organization, had grown significantly, and was finally made a professional organization in 1865.

New York was still plagued by fire, but arson, it seemed, was a fear left in the past.

Paddy Hirsch has worked in public radio at NPR and Marketplace. He came to journalism after serving as an officer in the British Royal Marines, and lives in Los Angeles. He is the author of the nonfiction book explaining economics, Man vs. Markets, and most recently, the historical mystery Hudson's Kill.

All the Weird/Spooky Things We Like to Read, Watch, and Think About, But Only in October 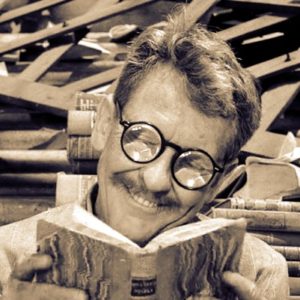 All the Weird/Spooky Things We Like to Read, Watch, and Think About, But Only in October

Here in the Lit Hub office, we love Halloween (actually, some of us in this office hate Halloween, and others are fairly...
© LitHub
Back to top