The silver car rolled by like clockwork each day during recess. At first, one or two kids noticed it, but, soon, the teachers did, too. Then the parents were told. Someone was casing the playground, it seemed, and all of Dean’s Mill Elementary School was in a frenzy.

Kids stayed inside during recess, parents called infuriated—until someone’s dad finally stepped forward and informed everyone that the car was his, that he and his wife were going through a divorce and he missed his kid. The mania died down after that, but, in retrospect, I wonder why. Sure, strangers equal danger, but how is a desperate dad any safer? Suburbia may fear its interlopers, but homegrown horrors are no less horrific.

I was reminded of this long-lost memory when my husband and I moved from Queens, New York, to Hackensack, New Jersey, after purchasing our new house. I was in the midst of a hectic binge of the books of Liane Moriarty, which make monsters out of everything from secretive husbands to decorative fountains, and although I loved my quiet little tree-lined neighborhood, I couldn’t help but see the dark side.

Cities are full of horrors—of course they are. Random stabbings and rapes and robberies. But does that make them any scarier than the suburbs, really? What the ‘burbs lack in quantity, they make up for in intimacy. My new neighborhood is decidedly safer than New York City, of course. We have two sex offenders within the immediate radius, compared to the hundreds listed for our old neighborhood in Queens. Still, does quantity really matter that much? Or is it more terrifying to know exactly where those men live?

Moriarty’s books are full of these intimate horrors. 2014’s Big Little Lies finds us in the aftermath of a murder that occurred at a kindergarten trivia night. Over the course of the novel, (spoiler), we discover that successful businessman Perry Wright was the victim, pushed to his death by a kindergarten mother, Bonnie Carlson. But Wright isn’t innocent: he raped a woman named Jane Chapman years before, and victimizes his wife, Celeste, regularly. Bonnie pushes Perry to save Celeste, who the man is on the brink of beating to death. Those who have read the book or watched the HBO adaptation know that there’s a lot more to the story, but the thrust of it is this: the baddies aren’t always outsiders, they’re husbands, wives, fathers and mothers. And they don’t do bad things randomly.

2013’s The Husband’s Secret thrums along a similar wire. Cecilia Fitzpatrick finds a letter from her husband only to be opened upon his death. Of course, she ends up opening it—even though he’s very much still alive. As it turns out, he was accidentally involved in the unsolved murder of a local girl that rocked their little community years before. His actions lead to another attempted murder decades later, and all manner of heartache and pain. Again, there are no murderous strangers wandering through town—serial killer style—with a thirst for blood: just local people, doing local things and making local mistakes.

I feel safer in my neighborhood than in the city, sure; I know all of our neighbors’ names and a few of the dogs (Joy and Jolly and Cara Mia), but does that mean I know what’s going on beyond their pretty lawns? Probably nothing; they all seem very nice. But you never know.

The suburbs have changed the way I see—and listen. My husband likes to joke that, in the city, if there’s someone in your basement raising a ruckus and drinking, you just have to deal with it (it’s probably the landlord). In the suburbs, if there’s someone in your basement, you can shoot them. Gone are the days when a distant scream goes unnoticed or a siren on a sidestreet means misfortune for someone you don’t know. You don’t just share trash routes with your neighbors, you share worries, too.

Eschew the people living next door, and no one will hear you scream.

2016’s Truly Madly Guilty is a pretty accurate, and terrifying, representation of this mindset. A neighborhood BBQ almost turns to tragedy when a little girl nearly drowns in a fountain while the adults drinks and chat—and the only one to notice is a grumpy next door neighbor. He ends up falling down his stairs and dying while trying to get to the girl—and no one notices for weeks, since he’s not all that engaged a member of the community. The book grapples with these twin horrors: belong, and enter into a neighborly bond of guilt and horror. Eschew the people living next door, and no one will hear you scream.

Despite differing storylines and characters, one element remains consistent in Moriarty’s books: the location. And that location acts as its own beast, its own specter. The suburbs represent comfort and success, but they also represent, in some ways, giving in: giving in to one’s lot in life, giving in to aging. And what’s scarier than that?

Moriarty’s 2011 novel, What Alice Forgot, rang eerily true for me one evening as my husband and I drove to a strip mall wine store after dinner at a lackluster local Mediterranean place. We had spent the first week after moving to New Jersey agog at all the things the suburbs had on offer (Costco! Big grocery stores! Trees!), but tonight we were sniping at each other for one reason or another.

“I don’t want to live a TJ Maxx existence!” my husband growled at me, a direct dig, as earlier I had rhapsodized to him about visiting the discount store with my mom as a child.

What my husband said cut deep, even if he was voicing his own concerns, too.

Driven, artistic people who have a hard time sitting still, my husband and I were a bit worried about how we’d fare in the ‘burbs; for my part, I had lived in NYC for 11 years and would have likely been voted “Least Likely to Get Married and Move to Jersey” by my old friends. What my husband said cut deep, even if he was voicing his own concerns, too.

What Alice Forgot mirrored my experiences in some ways: 29-year-old Alice wakes up on a gym floor one day to discover that she’s actually 39, hates her husband and has become some kind of terrifying super mom. She has forgotten 10 years of her life, during which she has become horrifyingly suburbanized.

Of course, the book goes deeper than that, and she comes to understand the hows and whys of who she is now—and even to accept and like that person—but the book pretty much encapsulated what I was afraid of. That the suburbs would change me. That they would suck away my life-force and replace it with a Costco card.

Despite the quiet horror of the suburbs in Moriarty’s books, I’m not moving any time soon. I like my yard and my basement and my sunroom. I have my own office where I can write my essays and my thrillers.

And, in a way, what I took away from Moriarty’s books the most isn’t a fear of the next stage in my life—but an excitement. After all, the author is a mother and a wife who lives, for all intents and purposes, in the suburbs. You can write what you know without wholly becoming it—and scare the hell out of people in the process.

The Life and Times of Charles Willeford—Miami's Weird, Wonderful Master of Noir 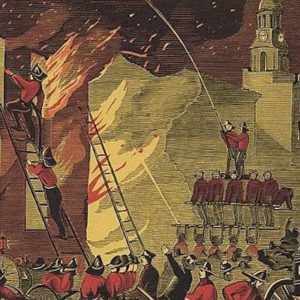 When America finally saw off the last of the King’s soldiers in 1783, it decided that many of the King’s laws should...
© LitHub
Back to top