"The next wave of crime fiction could help shape the public imagination of what a world where police weren’t in charge of public safety could look like."

Imagining a world without police is not new. No matter what form it has taken, law enforcement has never served all communities equally. For as long as we have had police, poor and marginalized communities have found ways to handle their own public safety needs—whether through vigilante justice, community-based safety programs or a combination of the two.

Historically, crime fiction has portrayed the police as heroes. But that vision of law enforcement is becoming hazier for the general public, and for most communities of color, it was never accurate at all. What does this mean for the next wave of crime and thriller writing? What role do we play in shaping people’s vision of what public safety looks like?

Author Nicole Glover recently wrote a fantastic essay about this phenomenon in mystery fiction, exploring the role of police (or lack thereof) in her own debut novel set in the 19th century where Black people fought for their freedom and justice on the Underground Railroad. As her essay bears out, while the reluctance of Black people to call on law enforcement for help has its roots in the time where police units were actually slave patrols, outrageously little has changed in the centuries since.

And that makes it tempting to look into the future. A few years ago, I sat down to write a novel where the main character was an investigator—in a city without police. She was a former professor with a keen analytical mind, who didn’t shy away from stacks of research and was driven by the desire to find justice for child victims of crime. In this hypothetical near-future, Minneapolis Police Department had been disbanded after several high-profile killings sparked sustained national protest. All eyes in the country were on the state of Minnesota as it tried an experiment: a state without centralized law enforcement, a state where the many jobs of police were divided up into separate units—where one large conglomerate with a bloated budget and little accountability did not exist.

I spent months researching. I listened to audiobooks by current and former law enforcement who spent their careers fighting for reform. I read books and articles by activists who thought the institution of police should be abolished. I wrote a really bad draft. And, at the end of the day, I decided that decades of incredible, careful scholarship—as well as the experiences of entire generations of Black people systematically targeted by our law enforcement system—could not and should not be dissected to create a pithy commercial thriller by a white woman.

In my next draft, the main character transformed into a regular old detective in MPD. For a time, it was easier to fall into the formula I had seen played out before me in hundreds of crime books and movies. A detective obsessed with a case, unable or unwilling to play by the rules because she was just. so. passionate. Looking back on it, not only was this a lazy writing decision, but it was a retreat into a system that had never been a threat to me; a system that I knew was toxic and violent, but that was also familiar. Even though I knew better, my privilege and desire to be comfortable got in the way of the story I was trying to tell. I wrote another bad draft, although this time, it was bad for different reasons.

Thankfully, I could see it didn’t work. The threads of social justice, the frustrations with law enforcement protocols and culture—those were still part of my book, and I wanted them to stay. Elle Castillo was a great investigator, but she wasn’t a cop. And in the end, I was glad about that. Eventually, I latched on to my own love of true crime podcasts, and she became one of them—an everyday person obsessed with getting justice for victims who’d been forgotten. A thirty-something woman with a microphone and a quiet room of her own.

Within months of finishing that draft and selling it to a publisher, the summer 2020 uprisings began. George Floyd was killed by a Minneapolis Police officer, sparking months of protest in every state of the USA, as well as cities all around the world. Black activists I follow on social media, who had been the targets of relentless mockery and bad faith attacks for even suggesting white supremacy still existed, were stunned to see even major corporations and most news media agreeing that Floyd’s death was wrong—that this country had a problem with racism in policing. While patently obvious to everyone who had experienced it, this was something that was still broadly denied only a few years prior during the Ferguson protests of 2014.

Suddenly, multiracial coalitions of protestors in major cities all over the USA were demanding their police forces be defunded. Masked and distanced to prevent the spread of a deadly pandemic, thousands took to the streets for days—weeks—and they were met with near-constant violence and chemical attacks by the very police they were demanding true safety from. The longer the protests lasted, the more the rage grew. Rage against police, rage against the cities where teachers had to buy their own school supplies but police were decked out in tanks and riot gear, rage against the federal government sending troops of unidentified officers to take away protestors in unmarked vans.

For the first time, it looked like events I had envisioned in that early draft of my book might actually be coming about—starting in the very city where I had imagined it. Minneapolis City Council met and voted to consider defunding their enormous police force. Over the months of the protest and even after it died down, cities proposed and passed new programs to reassign calls where someone was in mental distress away from police to unarmed social workers. Even facing backlash from disgruntled law enforcement and their unions, some cities listened to their constituents and worked to reimagine public safety without—or with fewer—police.

That is not to say that every attempt has so far been well-managed or successful. Indeed, all eyes are on Minneapolis, where the majority of city council seemed sympathetic to the demands of protestors and did make cuts to the police budget. While the country is watching the trial of Derek Chauvin, the officer charged with murdering Floyd, the efforts at defunding the police and replacing them with a new public safety department are still ongoing. Despite the apparent support last summer, the work of activists on the ground has received far less attention—and less support. Much like I did with the draft of my novel where Elle became a regular detective after once being a progressive investigator, many white people in Minneapolis have retreated into the comfort of the familiar—even though they now know it’s toxic and violent. These days in Minneapolis, the issue of defunding the police has become a firebrand of controversy in the city. Just days ago, another Minnesota police officer killed an unarmed Black man, Daunte Wright, only minutes away in Brooklyn Center—a devastating reminder that incremental progress and bureaucratic demands for patience invariably endanger the lives of those who cannot afford to wait for change.

As with so many political divides, it’s difficult to overcome people’s notions of what a cause like “Defund the police” actually looks like. It is hard to imagine the world any other way than how it has always been. That is where storytelling can be a fiercely powerful tool. Authors of mysteries and thrillers who support a new vision of public safety have an opportunity with our work: to imagine the world as it could be, not as it is. What people see, what they read, what they listen to—these both reflect and impact the world that we live in.

We can demonstrate how the world would look without these institutions by finding ways to write and solve crimes without valorizing the police. Or, we can write stories in which those systems don’t exist at all, breaking out of the harmful formula where policing and incarceration are the only solutions to stopping crime. The next wave of crime fiction could help shape the public imagination of what a world where police weren’t in charge of public safety could look like. Many of the most beloved classics in literature envisioned systems, scientific advancements, technology, and societies that were only a dream at the time. The privilege of doing so is not just reserved for authors of speculative fiction; it’s available to crime writers as well.

When it comes to a world where justice is equitable, where incarceration and punishment are archaic responses to crime, and where public resources are devoted to making communities safer from the inside out—may we all dare to dream so boldly.

Amy Suiter Clarke is a writer and communications specialist. Originally from a small town in Minnesota, she completed an undergraduate in theater in the Twin Cities. She then moved to London and earned an MFA in Creative Writing with Publishing at Kingston University. She currently works for a university library in Melbourne, Australia. Girl, 11 is her debut novel. 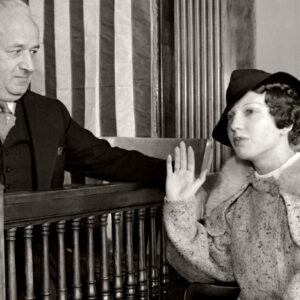 In January 1936, twenty-one-year-old Ann Cooper Hewitt, the well-known San Francisco heiress, called a press conference alongside...
© LitHub
Back to top