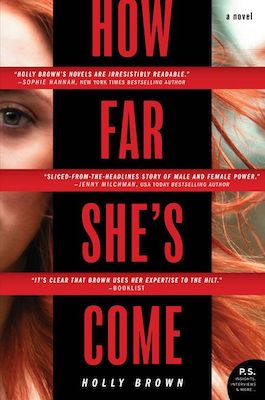 The following is an exclusive excerpt from How Far She’s Come, by Holly Brown. In the following passage, a young college grad goes to a job interview, only to find out that her worst experience is now her best qualification for the job. Brown’s latest is a timely response to #metoo and sexual harassment on the internet.

They’re watching me, I know that. And I’m not talking about the viewers at home, though it’s no coincidence that ratings are up. If they killed once, they can kill again. No one’s loyal to me. Conspiracies are real.

I can feel my knees buckling, about to give way. While the past two months have been a crash course in power and paranoia, the truth is, I don’t have any real journalism training—or nearly enough life training—to stand up to . . . who? Who’s the real puppet master? How deep does it go?

At least I have the diary.

I can do this. I will do this, because I have to. They need to be stopped.

This can’t be the end of my story.

Has he already seen me naked?

It’s usually my first thought when I encounter a new male. This time, though, it’s not about my professor or a stranger walking toward me on the street or the cashier or someone who was supposed to be my friend but it turns out really only tolerated me for Chase’s sake and who might very well be posting anonymously behind my back. This time, I’m thinking it about billionaire Edwin Gordon, he of the ordinary name and the enormous wealth, who helms INN, the Independent News Network (“Because independent thinking is the only way out”).

I almost didn’t come here today, figuring the invitation was most likely a cruel joke. One of the internet trolls decided to get creative and was nearby filming, ready to expose me as I craned my neck, searching for the private jet that supposedly had me listed on the manifest. He was waiting to catch me in the act, guilty of the ultimate hubris: believing I’d been marked as special, that Edwin Gordon actually wanted to meet me. But I decided that I wasn’t going to pass this up, on the off chance it was real. It wasn’t until I was in the Lyft headed for the Palo Alto Airport that it occurred to me that humiliation might be one of the better scenarios. A pro-rape activist who’d targeted me online could be luring me to the airport to kidnap me and carry out his sick fantasies. It might not be a joke but a trap.

For the most part, I don’t need to worry about the trolls anymore. About being heckled or threatened. About being photographed or followed. About my phone being hacked and my private texts and photos made public. That’s because I shut it all down. I let them run me off the internet in exchange for some peace of mind. It wasn’t a fair deal, but it was the only thing on offer from the police, and while I don’t really have peace yet, I’m a lot closer than I was.

But this is no joke. I’m really here, on a private plane as sumptuous as I imagine a suite at the Ritz-Carlton would be, not that I’ve ever been in a Ritz-Carlton. I’m a twenty-four-year-old recent college graduate, and granted, that college is Stanford, where silver-spoon kids have been on many private planes and in many Ritz-Carltons, but I’m not one of them. I was raised in Tulip, Montana, a small town two hours north of Missoula, where my father ran a grocery co-op frequented by ranchers and aging hippies. The mother I never knew must have thought it hilarious to name me Cheyenne, so I could spend the next however many years I’m on this planet telling people that I’m not actually from Wyoming but from a state nearly as underpopulated.

Yet none of those silver-spoon kids are here, on a silk couch, across from Edwin Gordon. My legs are crossed chastely—has he already seen in between them?—while Edwin has his shoes off, his navy-blue-striped shirt untucked and unwrinkled, and a bourbon in his hand. When asked by a flight attendant, I declined not only alcohol but water. I’m not sure I’ll be able to keep anything down. I’m glad my long red hair is pulled back in a low ponytail, so I can’t fidget with it.

Edwin is in his early forties, his dark hair silvered in a way that looks strategic and a ridged forehead that’s supposed to signal he’s eschewed Botox, though the rest of his tanned face is suspiciously boyish. He’s not exactly handsome, but his level of power makes up the gap so that he’s just about the most attractive man I’ve ever seen in the flesh.

Not that it matters, because I have a boyfriend, and everyone knows that, to his credit, Edwin dates women his own age or older. They’re entrepreneurs and philanthropists and humanitarians whose accomplishments are matched only by their immaculately preserved beauty, as if they’ve been cryogenically frozen and revived moments before their latest public appearance.

Edwin smiles and says, “You want to know why you’re here?”

I’m too nervous to smile back, sweating in the summer-weight light gray blazer and skirt I bought for interviews, of which I’ve had only three since last month’s graduation. My GPA was a 2.9, and my major was sociology. Every time a prospective employer googles my name, autofill will suggest the search “Cheyenne Florian naked.”

Yes, I definitely want to know why I’m here.

“You’re my dream girl from when I was a twenty-something,” Edwin says, and my green eyes widen in shock. Plenty of men hit on me—and worse—but this is Edwin Gordon. “I’m hoping that you’ll speak at some point in this conversation. That would be what defines it as a conversation, as opposed to a monologue.”

Then suddenly, the flattery wears off, and I get it. I want to ask if this plane is taking off or if I’m just a stopover.

Then suddenly, the flattery wears off, and I get it. I want to ask if this plane is taking off or if I’m just a stopover. A quickie. I’ve been sexualized by strangers, without my consent or my intent, for months now.

“I’m going to get off now,” I say. Then I turn red, realizing that my language itself was inadvertently sexualized. Minefields everywhere. I stand up. “Nice meeting you.”

“Like you haven’t seen the pictures. Maybe you saw the video that sparked it all, maybe not. But I’m not who people have made me out to be. I’m an actual flesh-and-blood human being and not anyone’s fuckbot. So, nice meeting you.”

I start to head for the door, pushing past the two men who could be most accurately described as goons and who are standing sentinel on either side of Edwin’s couch.

Edwin gets up and makes a move as if to block me. I can’t help it, I flinch. I never used to flinch when a man was in my path. These months have changed me, which makes me even madder.

Edwin steps back and raises his arms in the air, like he’s a hostage. As if he knows anything about that. About having to restrict his movements out of fear. About making his world small. Making himself small. Wishing for invisibility.

“I’m sorry,” he says in a low voice, “for the terrible things people have done to you.”

“I want to help you turn it all around,” he says. “To use what happened to you to make a difference.”

“What are you saying, exactly?”

From How Far She’s Come by Holly Brown Copyright © 2018 by Holly Brown. Reprinted by permission of William Morrow, an imprint of HarperCollins Publishers.

The Making of a Florida
True Crime 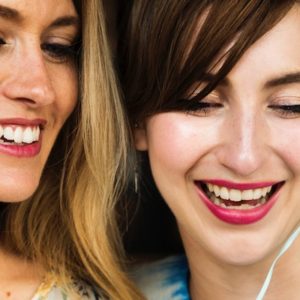 7 Podcasts That Will Make Your Mom a True Crime Addict It’s no secret that crime podcasts these days are particularly popular with women. This Mother’s Day, we hope you’ll...
© LitHub
Back to top