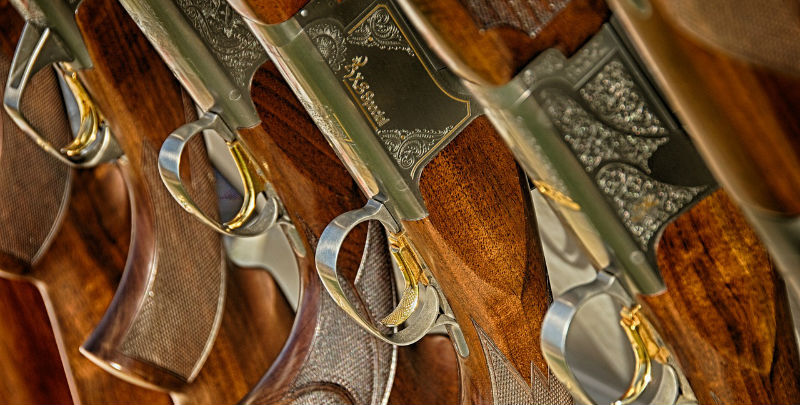 An Historian Looks at a Family Tragedy and Evolving Gun Cultures

My father is from Muktsar, Punjab, a town just on the Indian side of the border with Pakistan. That border was drawn in 1947, when he was four years old, as part of the subcontinent’s independence from British rule. Through various commercial, industrial, and agricultural pursuits, his father, Des Raj Satia, slowly acquired a great deal of land in and around Muktsar. Indian Punjab was itself divided in 1967 according to new state lines, and Des Raj—“Baoji,” we called him—was unsure what would ensue, going by his experience of the Partition of 1947. So, partly to insure against the risk of displacement, he sent one of his five sons to the new state of Haryana, one to neighboring Rajasthan, one to Delhi, and one to the United States: my father. One son, Bharat, stayed in Muktsar, along with Baoji’s younger brother Balraj and Balraj’s two sons. (This schematic narration condenses into two sentences a host of accidents, acts of personal courage, ambition, and confusions. It also writes out of the story Baoji’s two daughters. But in the manner of a fable, we will allow it.)

My brother recently attended the latest court hearing about our family property in Muktsar. He brought back for me a copy of Baoji’s will, dated 1970 and signed by Baoji, my grandmother Shanti Devi, and Balraj, each in a different script (Persian, Devanagari, and Roman). Despite this document, upon Baoji’s death in 1983, the family fought over the disposition of his property. Bharat claimed everything in and around Muktsar on the basis of having been the only one who had stayed and endured Punjab’s descent into nightmarish political and military conflict during the late seventies and eighties.

Bharat’s brothers, Balraj, and Balraj’s sons challenged his claim. As the struggle over hundreds of acres unfolded, the strip of land dividing Bharat’s and Balraj’s homes in Muktsar became a daily irritant between the households. Guns were part of the martial frontier culture encouraged in this region during British rule, and Bharat had always talked and acted tough as a youth. As tempers boiled, finally, in 1991, he stood in the contested garden and aimed his revolver at Balraj, threatening to shoot. Exactly what followed remains obscure. Certainly, he fired several shots, and Balraj fought for his life for three months in hospital. I have seen photos my father later took of bullet marks in the garden wall. A cold war between the neighboring families unfolded thereafter as a property settlement continued to elude the family.

His wife later described to me how he shook as he pointed the gun, insisting that he meant only to intimidate his uncle. To her, he had shot his uncle despite  himself.

Bharat’s wife and son were at his side when he pulled the trigger. His wife later described to me how he shook as he pointed the gun, insisting that he meant only to intimidate his uncle. To her, he had shot his uncle despite  himself. But her own and their son’s  presence at Bharat’s  side during the standoff also raises questions: If he was shaking, did they goad him? Or restrain him? I know that my uncle Bharat alone was responsible for nearly killing his uncle, but from what I recall of his temperament, I cannot shake the feeling that he would not have physically assaulted his uncle had he had recourse only to a knife. He was too afraid; he was all bluster, without the malignant emotional energy required for such an intimate attack. But pulling a trigger was thinkable in a different manner. The gun changed what he was capable of; he meant it to terrorize his uncle and keep him off his property. I can imagine him that day, against the backdrop of an increasingly militant Punjab, casting himself in a script in which the gun was a prop that he waved to instantly cast his uncle in the role of common trespasser, alienating their familial bond into a contest between strangers. (In court, to protect his wayward nephew, Balraj said he had shot himself accidentally while cleaning his gun, reaffirming the severed bond.)

By shaping his actions, the gun made Bharat, just as someone had made the gun. As I wrote Empire of Guns, I recalled this scene in the garden time and again. The script by which Bharat’s revolver figured in our family land dispute came to him through culture. I have found one of its origins in the eighteenth century, when, in some places in the world, guns found their first role in interpersonal violence through contests over property in societies of strangers. This incident, its backdrop of provincial turmoil, its lasting legacy, the cotton industry that produced much of Baoji’s wealth—this family history has shaped my investigation of the British gun trade and the industrial revolution in the eighteenth century.

Perhaps my memory of the shooting in the Muktsar garden was sub-consciously at play when I stumbled on the curious story of a Quaker arms-making family in the eighteenth century, the Galtons. As I looked through the Galton records in the Birmingham City Archive, I discovered a point of view that seemed to me to upend received wisdom about the industrial revolution, and so, partly by accident and partly by will, I hunkered down for a long spell in the eighteenth century and communion with the troubles of another extended family—every unhappy family being unhappy in its own way, as Tolstoy tells us.

But I have also written this in a time of mass shootings in the United States. My daughter was in first grade when the Sandy Hook shooting happened, in December 2012. My heart broke like everyone else’s, five years into my study of guns in the eighteenth-century British Empire. My investigation into the place of guns in that world showed me that their uses are not fixed, but change with time and place. There were no casual shootings in Britain until suddenly, because of cultural shifts inaugurated by the Napoleonic Wars, there were. Likewise, the shooting in my family was not unrelated to the violence that tore up Punjab in the 1980s, and the mass shootings of our time are not unrelated to the war on terror. Culture and technology produce each other. Like all my work on empire and technologies of violence, this book is against militarism and imperialism. Some might be tempted to take its conclusion—that war was foundational to modern industrial life—as approbation of war, but my point is rather that this finding should give us pause in our embrace of that life and in our tolerance for the vast international trade in arms today.

It raises the question of how far complicity in war stretches in different times and places. When guns became central to eighteenth-century violence in a new way in the 1790s, the Quaker church demanded that the Galtons abandon their century-long investment in the gun trade. Samuel Galton Jr. went to great lengths to explain that it was not so easy to distance oneself from investment in war; apart from the difficulty of passing on his business, almost any other industrial activity he might pursue in its place would be similarly, if less directly, complicit in war.

We continue to face such dilemmas. After Sandy Hook, the investment firm Cerberus Capital Management publicly pledged to sell Remington Outdoor, the company that made the Bushmaster rifle that the shooter used. Public pension fund investors like the California State Teachers’ Retirement System had long called on the firm to sell the gunmaker. Four years later, as I finish this book, Cerberus has failed to find a buyer and has decided to let its investors sell their stakes in Remington and then move the manufacturer out of its funds into a “special financial vehicle.” (All this is quite apart from the relentless boom in gun sales and stocks in these years.)

The difficulty Galton perceived in 1795 continues to shape the efforts of capitalists and industrialists seeking to distance themselves from violence. Meanwhile, philanthropic capitalists like Bill Gates have begun to donate money toward the campaign for greater gun control. But given the diversity of investment portfolios, where is the beginning and end of the investment in guns and other arms? And how have those connections shifted since the eighteenth century? These are the questions I try to answer. 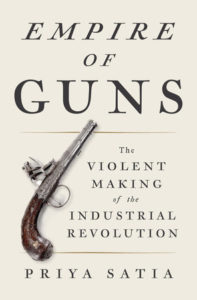 Adapted from EMPIRE OF GUNS: The Violent Making of the Industrial Revolution by Priya Satia,
published by Penguin Press, an imprint of Penguin Publishing Group, a division of Penguin Random
House LLC. Copyright © 2018 by Priya Satia.

Priya Satia is a Professor of History at Stanford University. She is the author of Spies in Arabia: The Great War and the Cultural Foundations of Britain’s Covert Empire in the Middle East, and her writing has appeared in Slate, the Financial Times, The Nation, and the Huffington Post, among other publications. She lives in Stanford, California with her family. 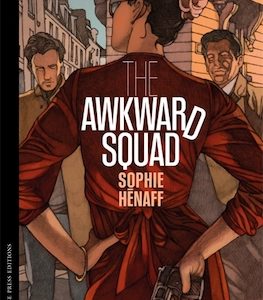 “Your new post takes effect in September. You’ll be heading up a new squad.” Capestan could not help raising an eyebrow...
© LitHub
Back to top